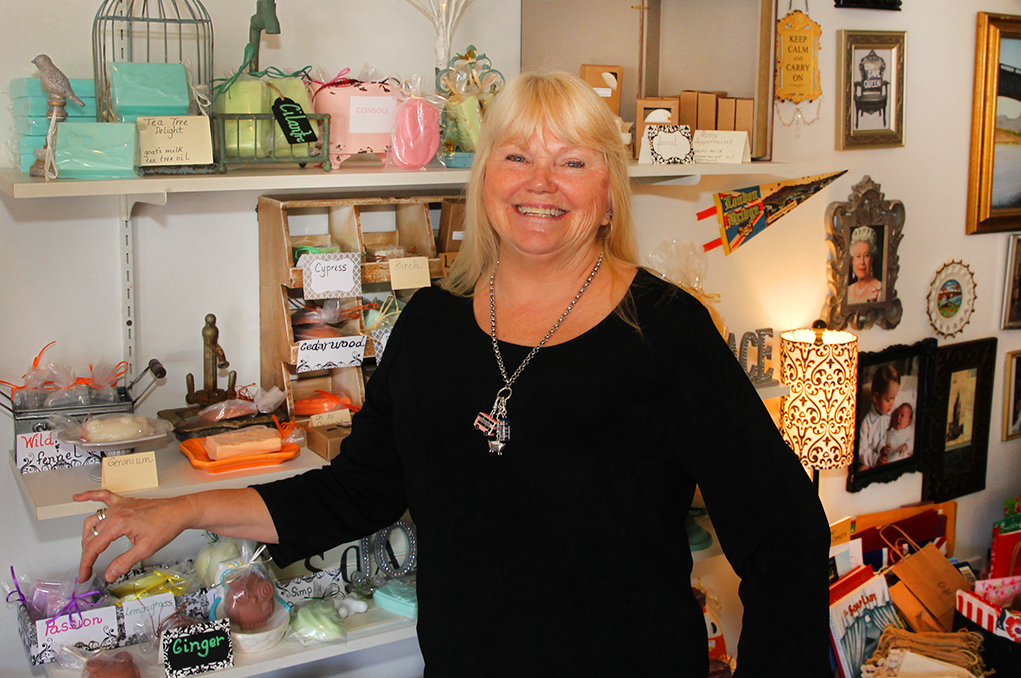 Most people know Cinda Anderton as the “soap lady” not just because of her bright and friendly smile, but for the beautiful and fragrant soaps displayed at her shop, HAVASOAP, located at the English Village near the Visitors Center.

From aloe- to shea butter- to goat’s milk-based soaps a variety of sudsy delights can be found at HAVASOAP. What makes this store unique is that the products she sells are handmade by Anderton. 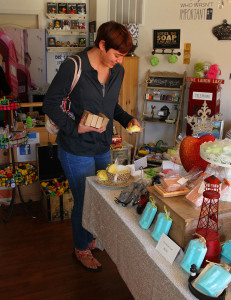 “My Sleepy Time, Lavender and Chamomile is the most popular, followed by Tea Tree Oil and Aloe soap,” Anderton said.

Before Anderton acquired the skill of soap making, she spent most of her life in Worthington, Ohio, a suburb of Columbus, where she was a teacher.

“I taught elementary school for 30 years. In that time, I taught grades first through fifth grade,” recalls Anderton.

“I also was a French teacher.”

Months before hitting the 30-year mark of teaching, Anderton and her husband began looking around for places to retire. That is when they both took a quiz online titled “Top Ten Places to Retire.”

“Lake Havasu City came up number one for my husband, and number two for me. Knowing nothing about Lake Havasu City, we decided to fly out and have a look and we loved it, so we found the perfect house for our needs.”

After retiring, she realized she felt too young to just retire completely and still had way too much life in her, so she decided to open HAVASOAP in 2013.

But before she opened the shop, she first bought her first homemade bar of goat’s milk soap. She was smitten and later turned to the Internet to learn to make it herself. Soon friends and family began requesting her soaps.

“It was by trial and error that I perfected the soap. I made soap for three years before opening HAVASOAP, so by the time I had the shop, I had it just right.”

Soon, not only was she making goat’s milk soap, she started making many more fragrances and shapes and sizes. Among them cute mini flip flop-shaped soaps were some she created to sell during spring break along with other novelty shaped soaps. Some of the fun novelty soaps include Star Wars, Big Bang Theory, Star Trek, London Bridge, kokopelli, lighthouses, cupcakes and almost anything you can imagine. 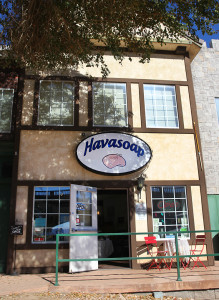 Havasoap is located under the London Bridge. Jillian Danielson/RiverScene

The best part about the now 3-year-old business, Anderton says is when people come in and find just what they were looking for, or request a certain soap that she is also able to make especially for them.

“I also love making special soaps for favors for parties or special occasions,” she said.

Aside for her love of soap making and her business, Anderton says she enjoys doing it all in the beautiful community she now calls home.

“I love the view from my shop window. Everyone is happily strolling along under the London Bridge, taking their time, enjoying the sights, I also love the sunshine in Lake Havasu and the ease of life.”

For those who find themselves in the English Village, Anderton said to (in her own words) “Havalook” inside HAVASOAP.

You can also visit the shop’s website, and order soaps online at www.havasoap.com.