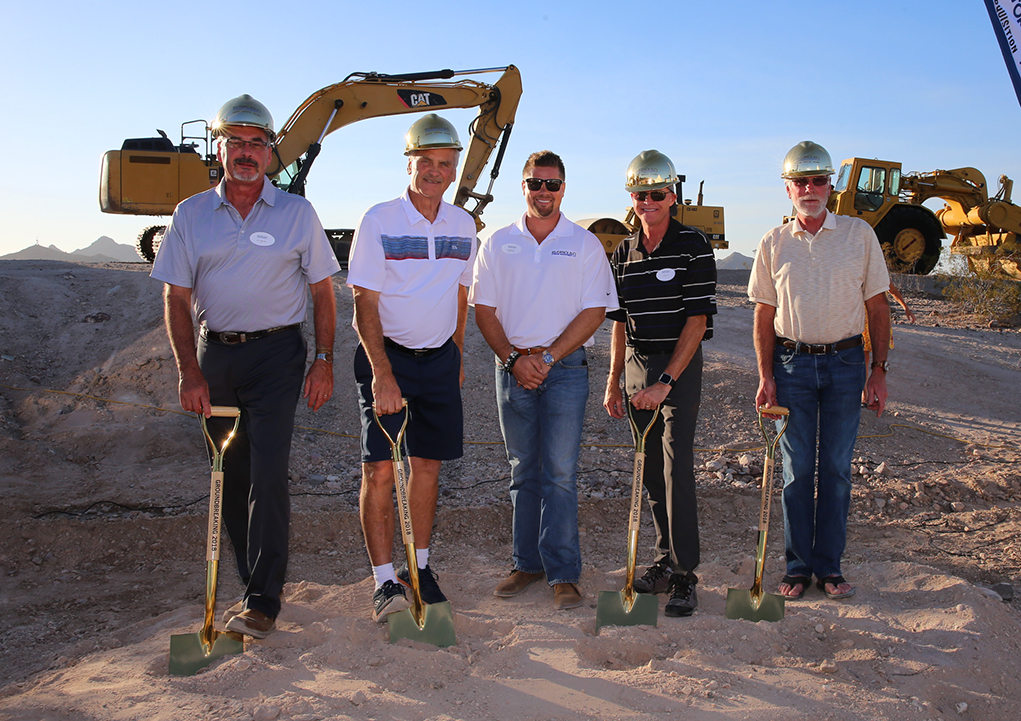 Golden shovels broke the first grounds of the Riverbound Custom Storage and RV Park over the weekend, bringing Phase One of the project to life.

The groundbreaking was paired with celebration of those involved in the revolutionary project housed along State Route 95 N across from Havasu Heights.

To learn about the state of the art design of the Custom Storage and RV Park, Click Here.

Many who influenced and supported the project gathered to celebrate the beginning of the development stages as well as honor Riverbound Storage Management as a new economic partner in Mohave County. The celebration at the site of the future establishment, was catered by local restaurants Shugrue’s and Mudshark Brewery. 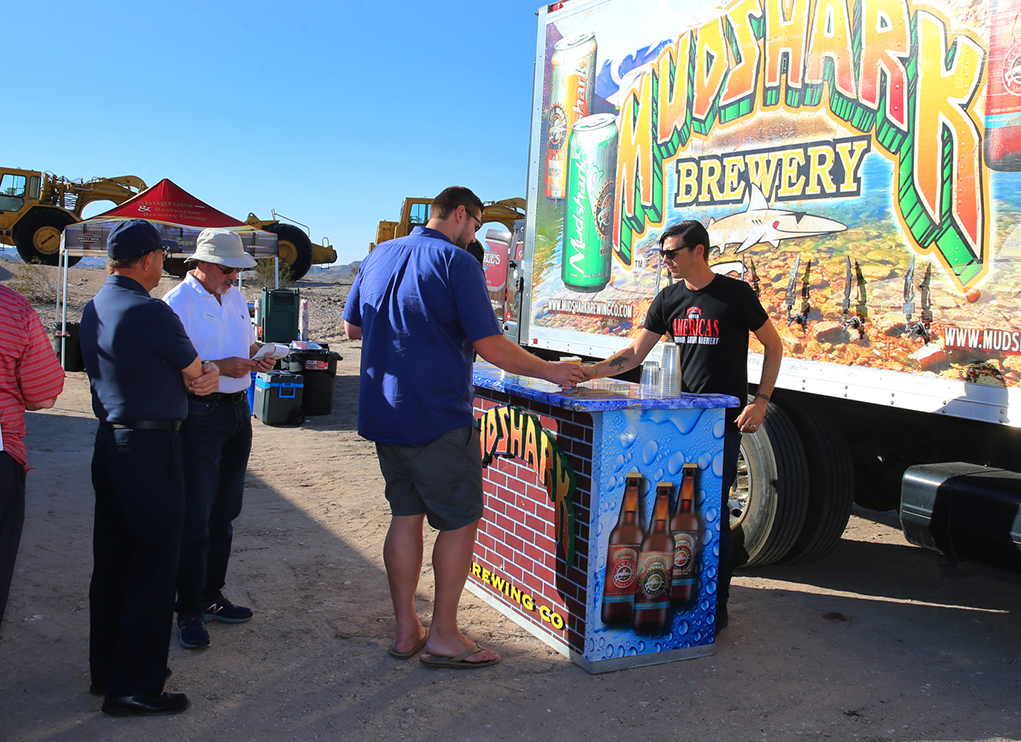 The ceremony began with a prayer by Pastor Howard Mazer.

He added that every individual and organization who has come in contact with members of Riverbound during the project development leaves with strengthened confidence in the success of the project and that future relations with the company would be appreciated and welcomed.

James Gray, executive director of the Partnership for Economic Development, spoke and touched on the convenience of Riverbound located only 11 miles from the largest State Park in Arizona. 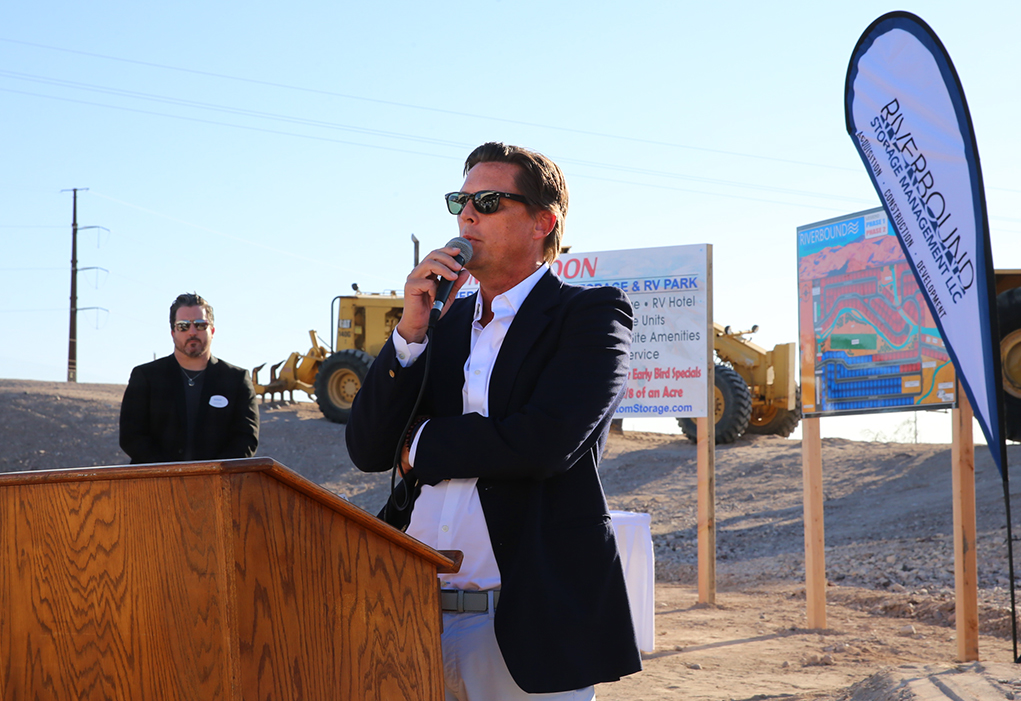 James Gray, Executive Director of Lake Havasu’s  Partnership for Economic Development, speaks to those in attendance of the ground breaking ceremony. Jillian Danielson/RiverScene

“Companies make communities. This is awesome and Riverbound should be very proud of this” said Gray.

Mohave County District Supervisor, Ron Gould, discussed the importance of development in Mohave County. He also referenced that the area surrounding the site is BLM land and will be preserved for recreational activity giving even more benefit to the site’s location.

“Riverbound Custom Storage and RV Park is a really novel idea and different from what we see. Mohave County is blessed that we are flexible and able to try new ideas” Gould said. 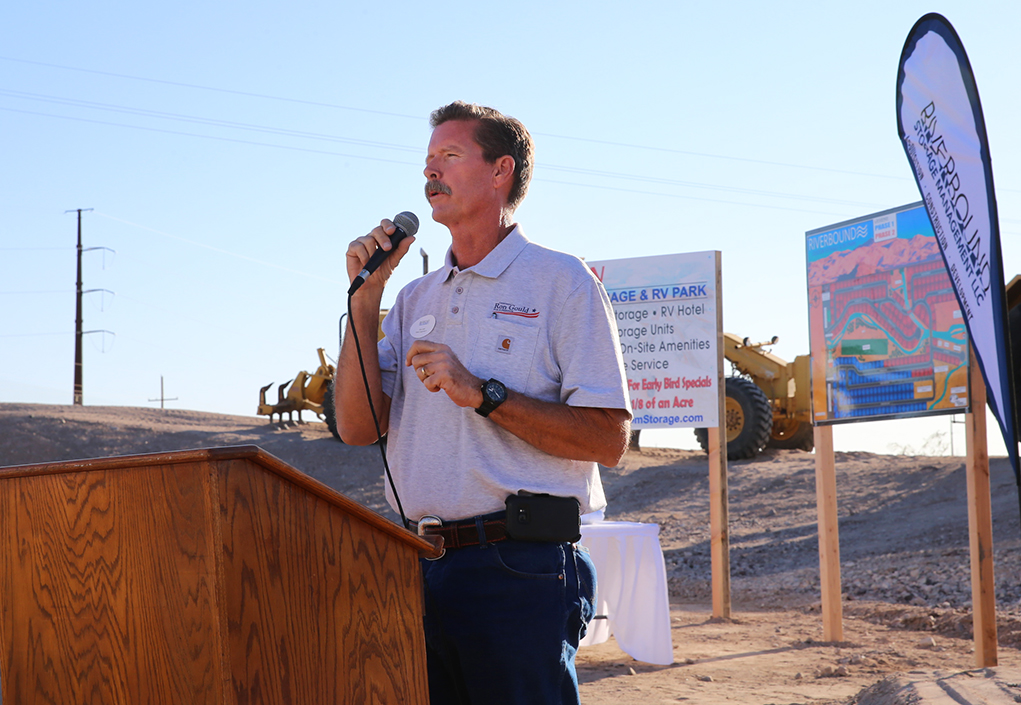 Ron Gould speaks to the guests at the ground breaking ceremony.

Key land developer in the project, Tony Jorgensen of Pioneer Earthmovers complimented Riverbound front man, Ryan Rodney for being “the most organized person I have come across.”

Jorgensen also noted that Lake Havasu has experienced a shortage of available land so the location and timing of the project was a positive and vital decision.

Luke Still and Mychal Gorden of the Desert Land Group, LLC assisted Riverbound in finding the ideal tract for the development. 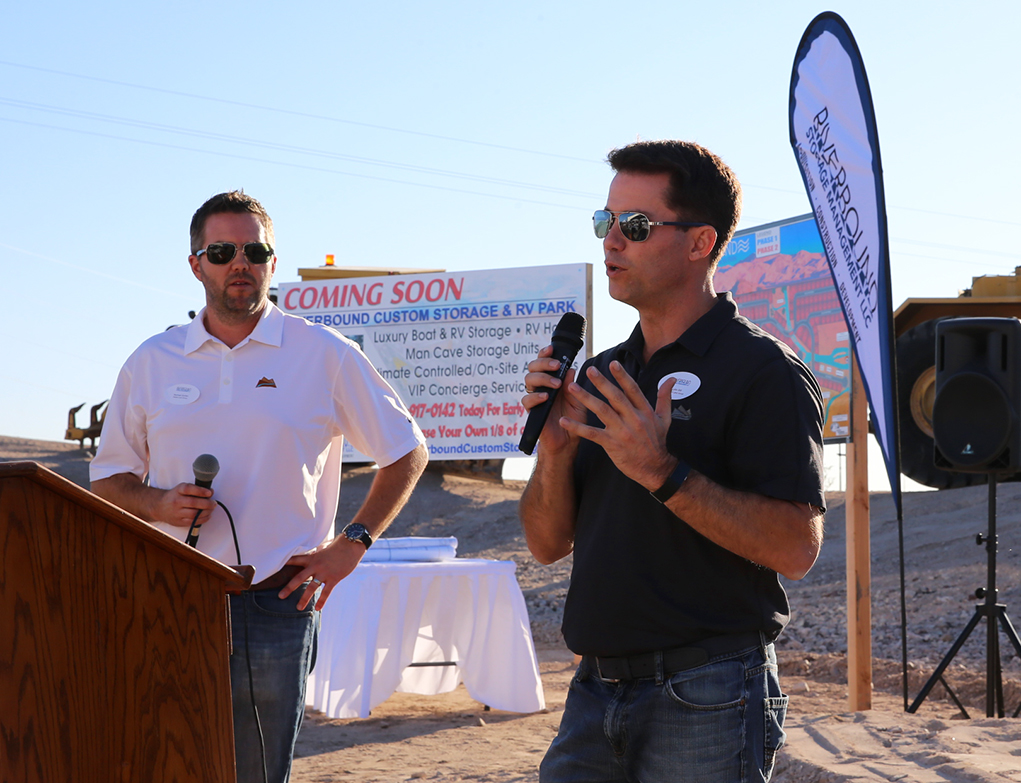 Mychal Gorden and Luke Still of Desert Land Group speak to those in attendance at the ground breaking ceremony. Jillian Danielson/RiverScene

“This project is ideally suited for those who want to enjoy the desert and the water. I think this is going to be a home run.”

The group also stated that the site is located in an opportunity zone strategically meant to boost investment and potential profit margins. This in turn means a boost in economic splendor for those involved in all levels from development to consumption.

Peter Proffit of Mohave Engineering Associates Inc., wanted to thank Riverbound Storage Management for putting time and money into the region of Mohave County and reflected on the experience of working with Riverbound as a whole.

“With any project there are hurdles and surprises but it’s been very smooth because Ryan has been aimed at doing things the right way.”

The ceremony closed with words from Ryan Rodney, the main catalyst in the project, giving thanks to God and the members of Riverbound Storage Management. 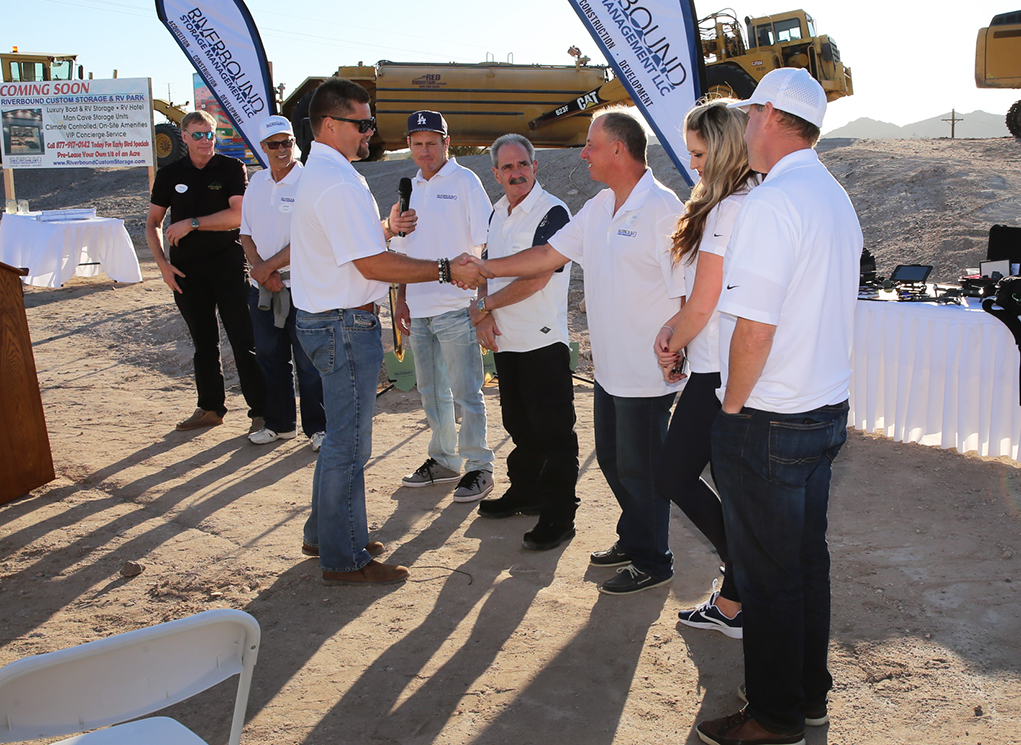 Ryan Rodney thanks each of his team members for their commitment and effort. Jillian Danielson/RiverScene

Rodney proceeded to invite all Riverbound members present to the front of the audience where he thanked  individually for the commitment, effort, and dedication to the project.

“This is a team that comes in day in and day out. Everyone on this team is fantastic and I want them to be more recognized than myself.”

To officially commence construction of the site, four team members grabbed golden shovels to pierce the ground, signifying the beginning of the project.

Riverbound Custom Storage and RV Park is set to finish Phase One of development by year’s end of 2019. 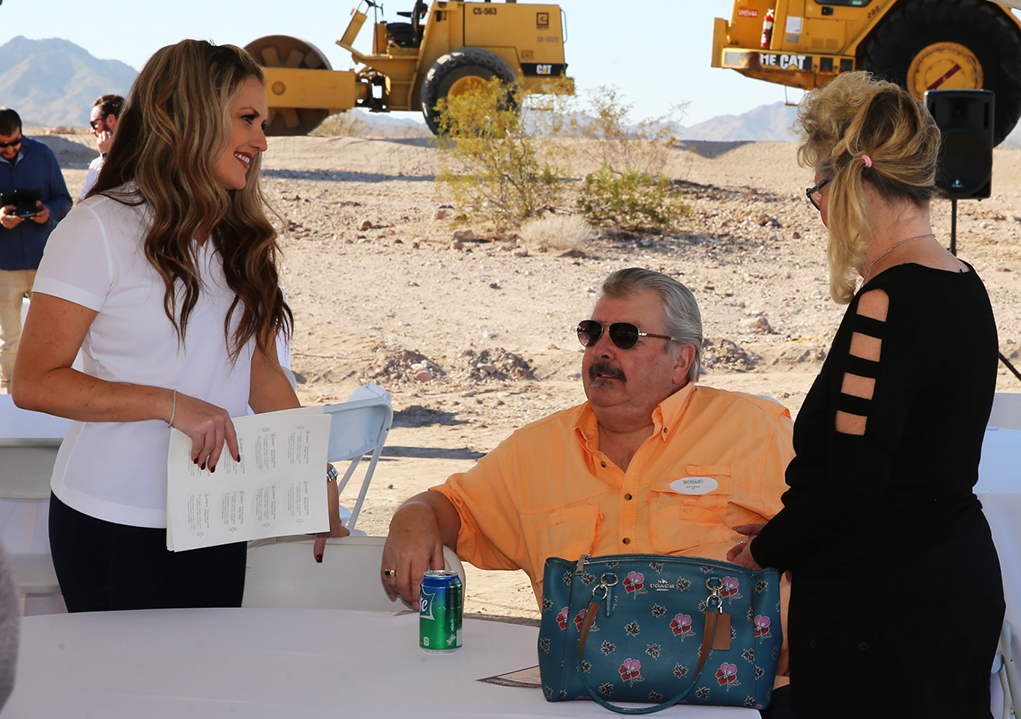 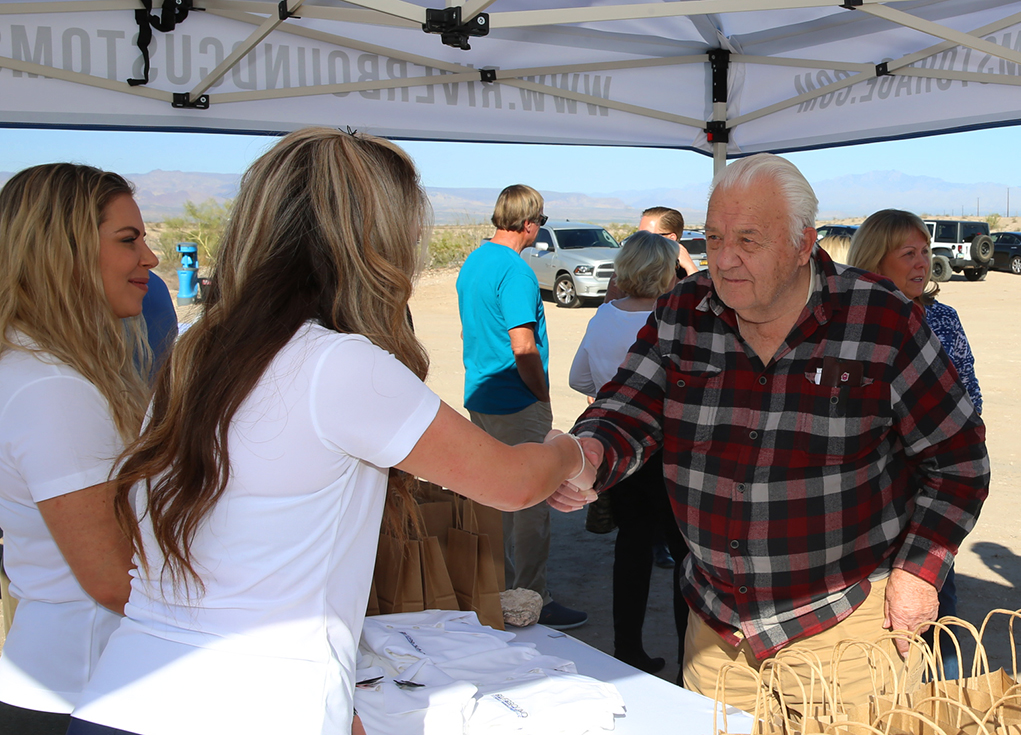 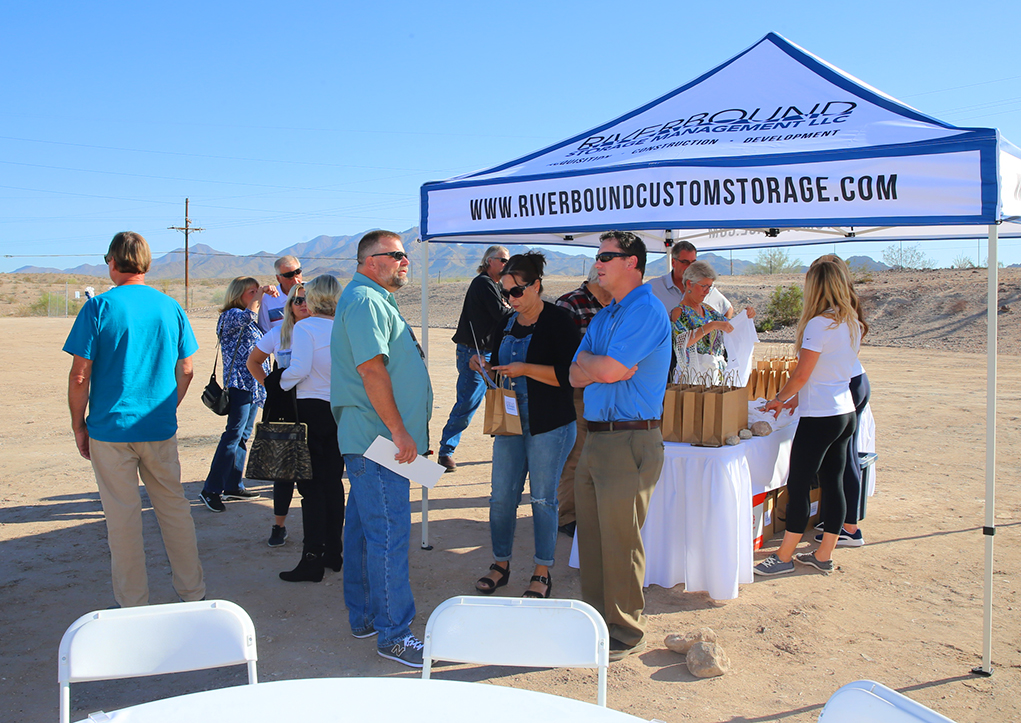 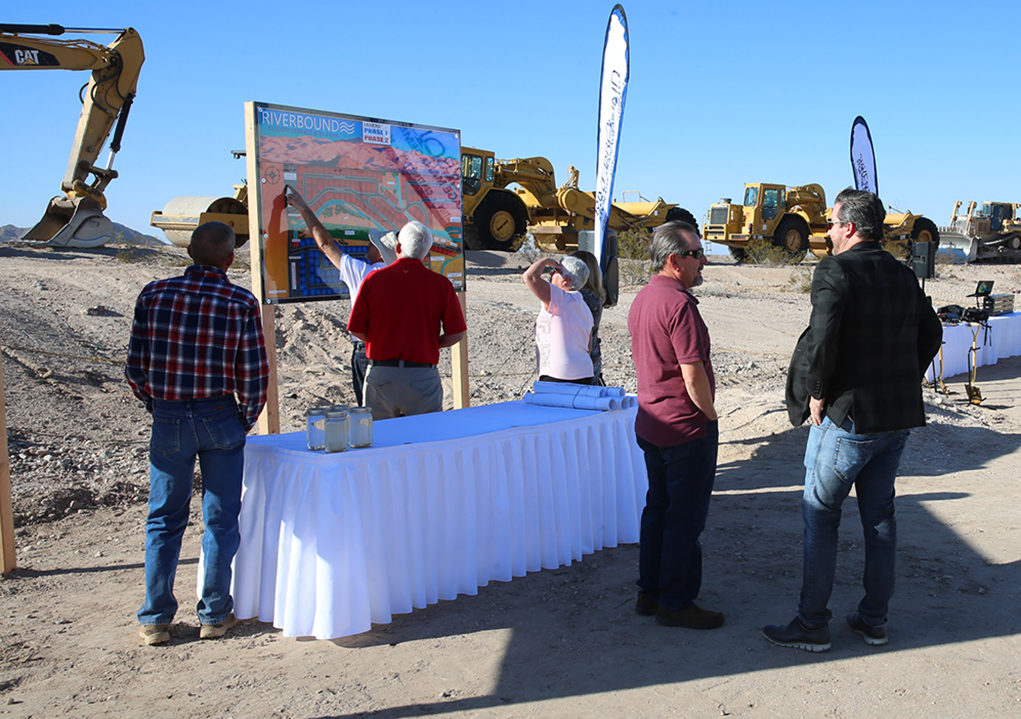 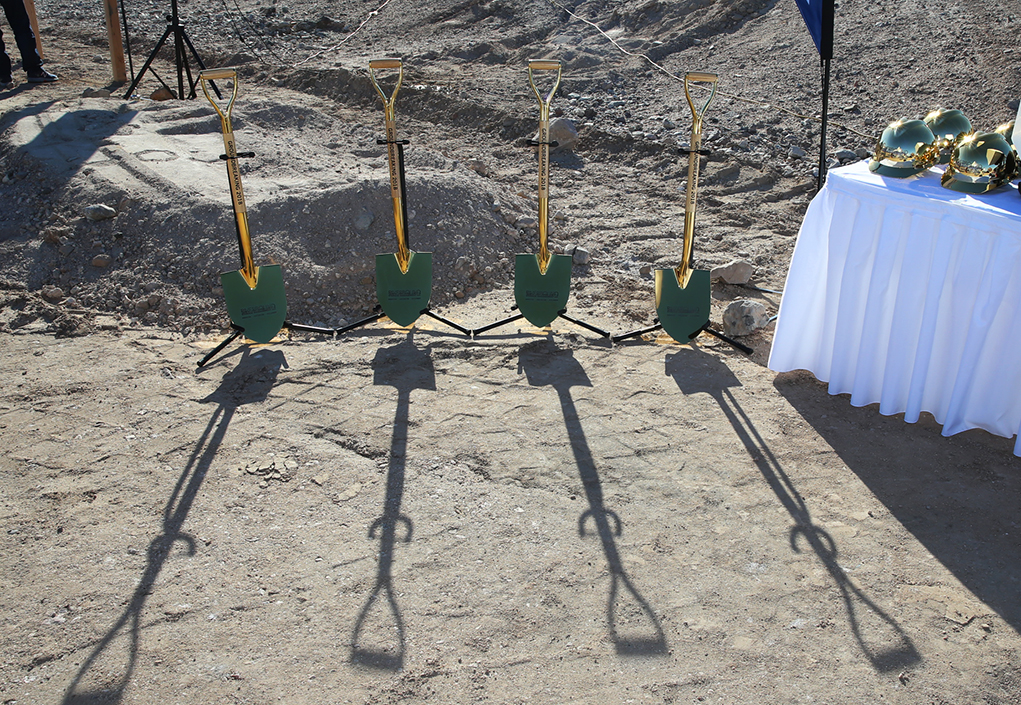 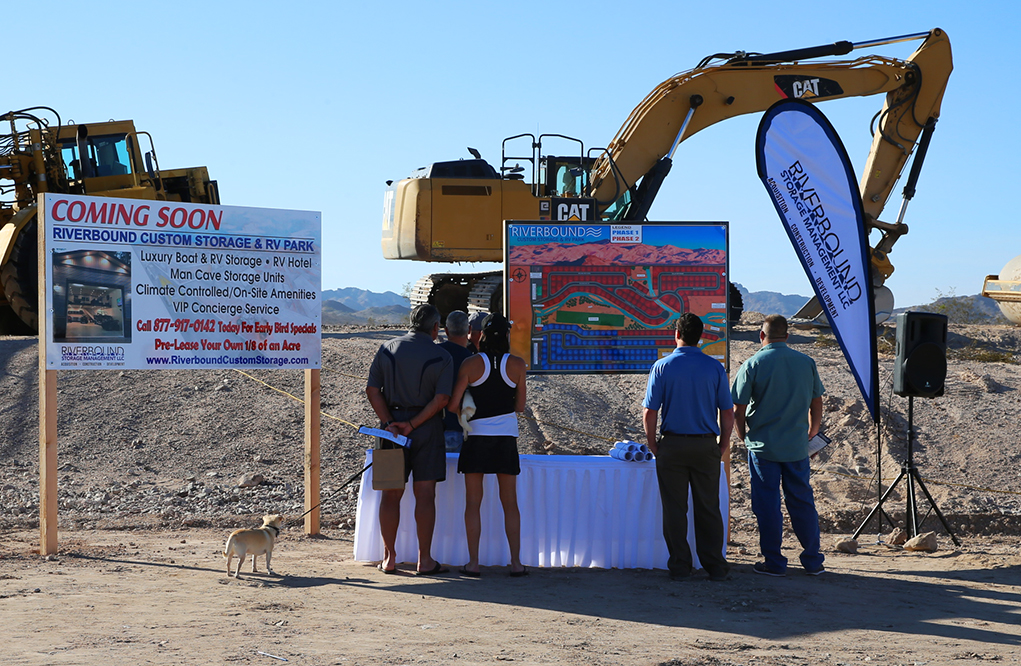 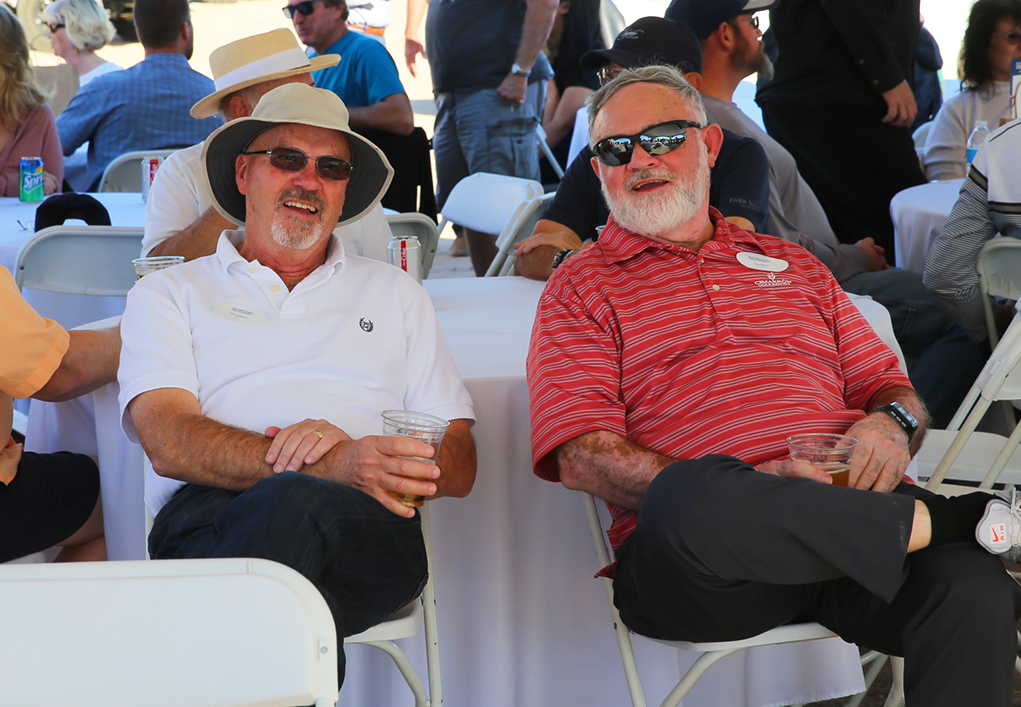 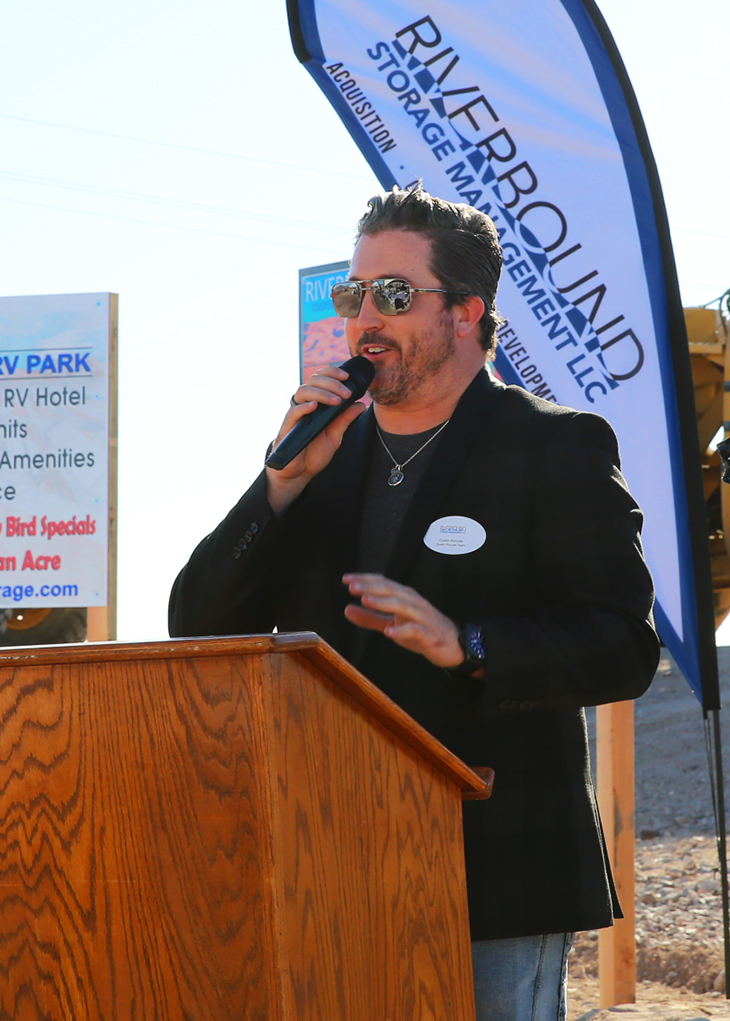 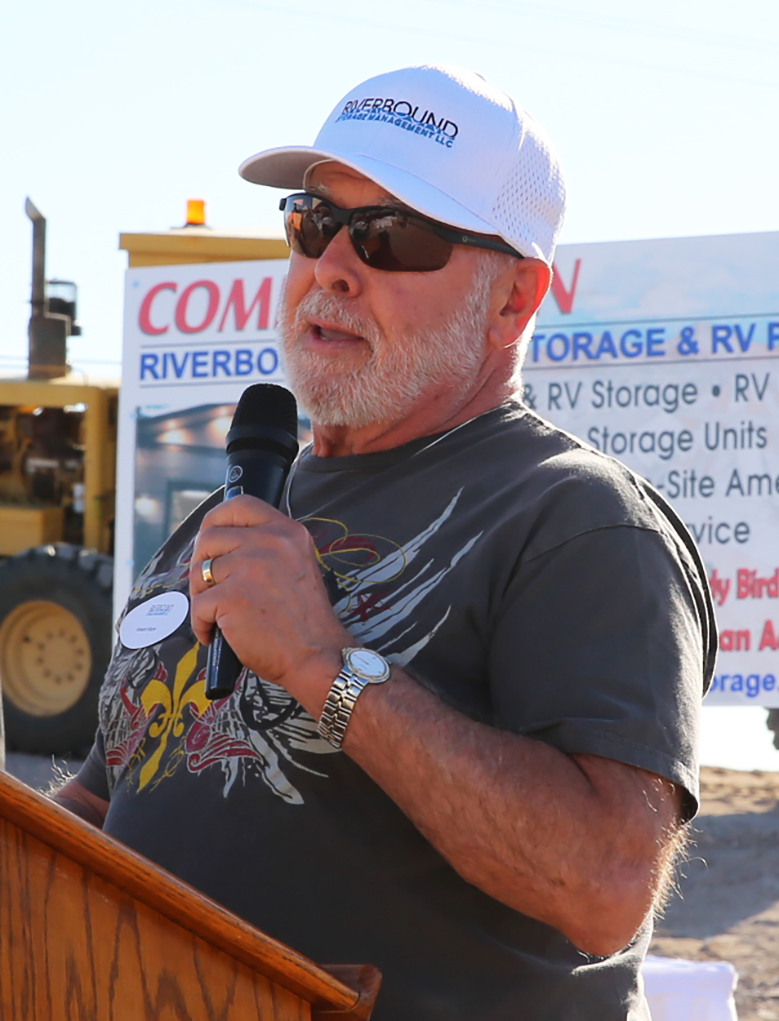 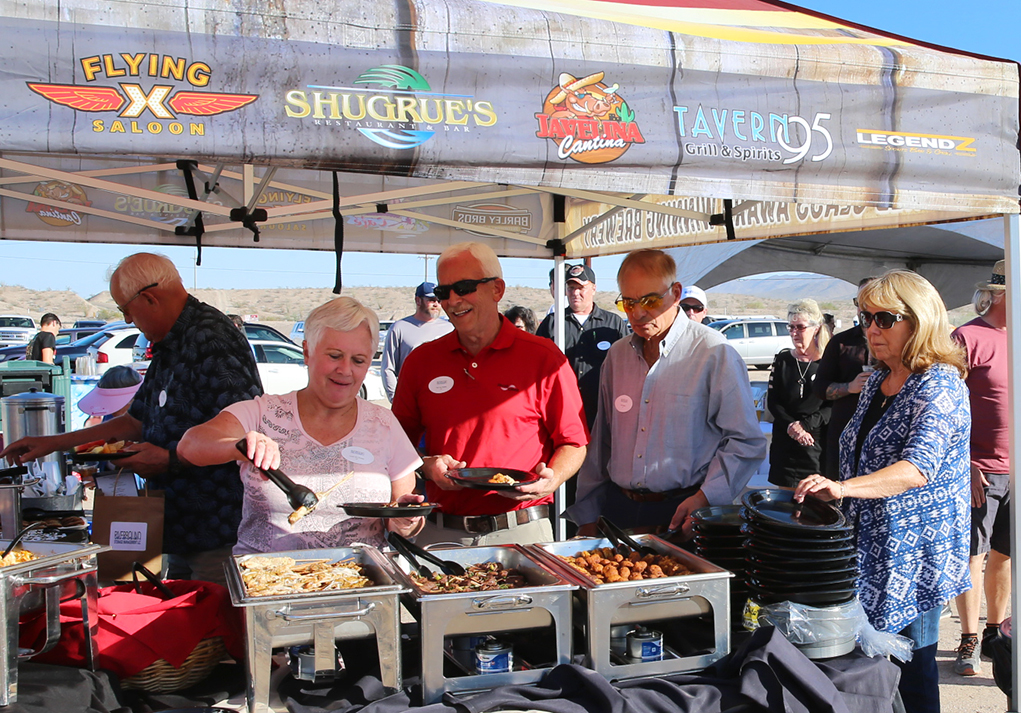 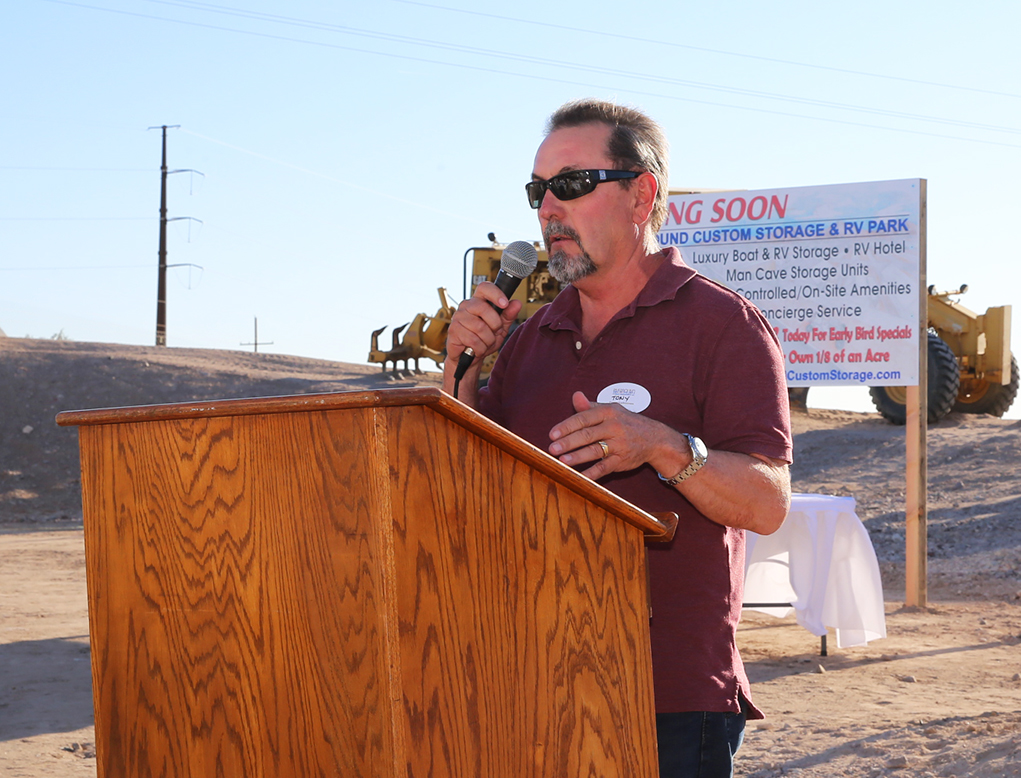 Ryan Rodney thanks each of his team members for their commitment and effort. Jillian Danielson/RiverScene