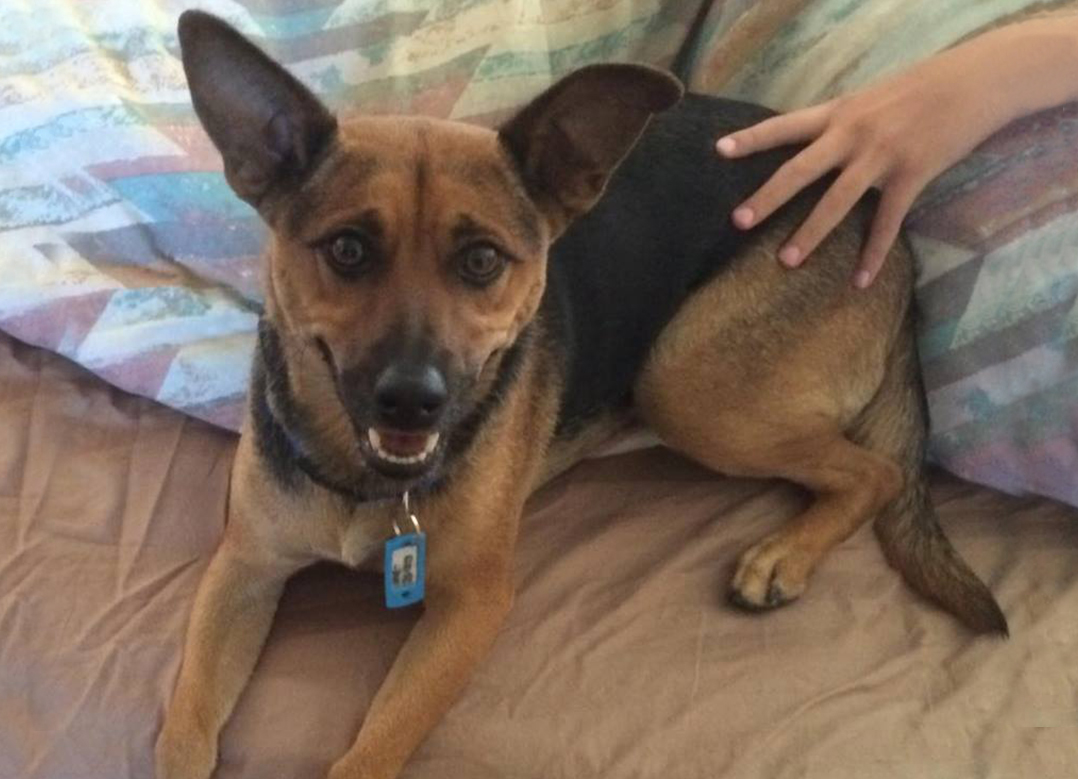 When an extended search for a lost dog in July in Lake Havasu City turned up fruitless, the Jacobs gave up hope. A string of reported ghost-sightings and the return of the missing dog’s collar further dashed expectation that 3-year-old Precious would ever snuggle with her family on the couch again.

“We looked for her for six weeks and never could find her,” said Grace Ann Etcheberria-Jacobs, of Havasu. “We gave up, thinking the heat or the coyotes got her.”

The dog was separated from its family July 15 from the area of the ice store near the south-side Bashas’ in Havasu.

The search included combing the area, missing-pet posters and Facebook postings on a page centering on lost pets in Havasu. A handful of calls were received, but all were dead ends. After one month, the dog’s collar was found by hikers and returned to Etcheberria-Jacobs, who was the contact on the posters.

“I never told the kids or my son, I didn’t want to get them upset,” she said. “But, it wasn’t bloody or chewed up, it was in perfect condition. It was like she had become so thin she just stepped right out of it.”

In mid-October, a Havasu man, and his wife – identified only as Dean and Barbara – contacted Etcheberria-Jacobs after seeing the dog resting three mornings on a hilltop near their home. The hilltop is in the desert area across the highway from Bashas’.

The couple followed the dog and attempted to capture her but were unsuccessful. Etcheberria-Jacobs and her husband Ed Jacobs, were contacted and they, too, tried to get close to the dog. They had no luck.

“Whenever we got close, she would run away,” she said.

Finally, Etcheberria-Jacobs told her son after having held off until she was sure it was Precious. Kyle, Grace’s son, arrived and identified the dog to be Precious. He followed her over three hills until she stopped. He knelt and coaxed the dog with a familiar ‘Precious, Precious, come on girl, it’s OK, come on baby girl’ and, with tail tucked, the dog approached. When she fully recognized her owner, Precious began wagging her tail and licking his face.

A trip to local veterinarian, Dr. Luna, of Paws and Claws Animal Care ensured that Precious was in good health, a bit thin from her ordeal, but very well. Precious’ family permitted the vet’s office to share details with River Scene.

“She is 23 pounds, which is a good-sized dog,” said Paws and Claws owner, Glen Mishkin. “The smaller ones, and cats that are declawed, wouldn’t have survived. Dogs, they adapt. They can eat out of a trash can or drink from a gutter, a pool or run-off somewhere.”

Those very instincts are what played into Precious’ favor when it came to surviving Havasu’s brutal triple-digit temperatures, windy and rainy monsoons, and the desert’s natural predators. The stories of survival and reunification at Paws and Claws range from a week or two, to maybe a month. Those happy reunions do happen, they said.

Precious’ happy reunion with the four adoring kids she knew so well as her family was October 24. When they brought Precious into the living room, there was shrieks of happiness, hugging, playing, licking and snuggling. Since, it’s been much more of the same.

“Finding that dog was such a wonderful thing for those kids,” Etcheberria-Jacobs said.