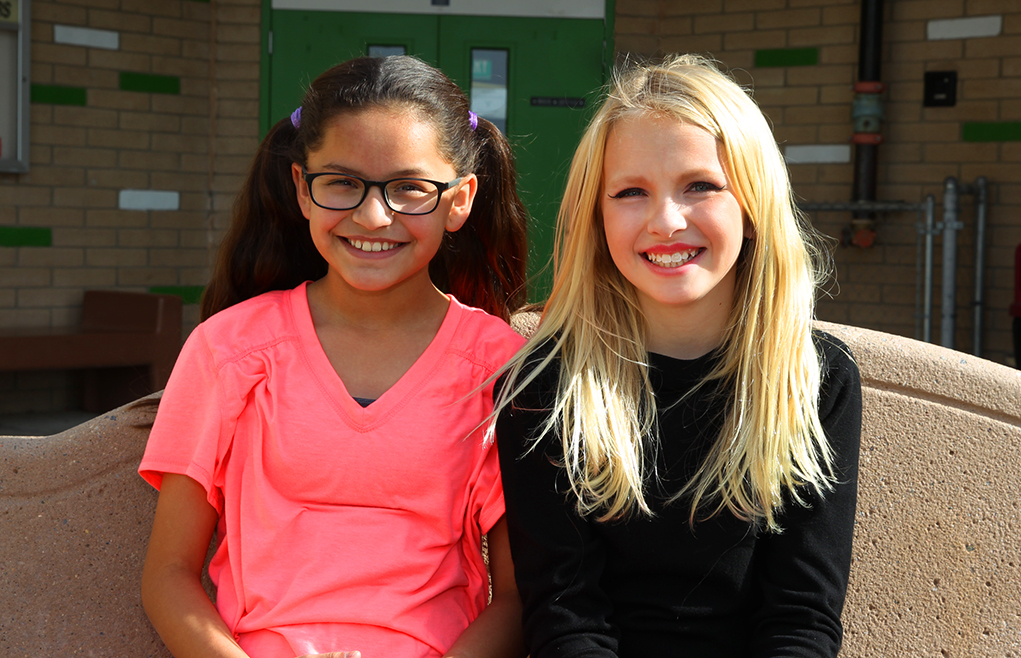 There are two dozen elementary and middle school students in Lake Havasu City who recently have been recognized for their outstanding take on drug awareness. The contests, which are sponsored annually by the Elks Lodge No. 2399 in Havasu, draw participation from hundreds of local youth.

Two of the top sixth-grade age group winners recently sat down with River Scene to shed some light on why they think it’s best to stay away from drugs.

“There is no good reason to do it,” said 11-year-old Jessalyn Garcia, who is a sixth-grader at Oro Grande Elementary and first-place Elks 2016-2017 Drug Awareness Essay Contest winner for her age range. The contest required 300 words on the subject. “You can get diseases and you can die. It ruins relationships with family. You can get cancer from it and you can get arrested for doing it.”

In her essay, she states, “there is no good reason for doing drugs. Most people who do drugs live a much shorter life than people who don’t do drugs. I know for sure that drugs are not worth losing your life.”

“It could ruin relationships with family and can make you do bad things that you will regret,” Cathers said. “You can get put in jail, and it can make you look weird.”

In other age groups, first-place seventh-grade entry winner Jonas James Katz’ essay stated, “people that party a lot with whiskey, beer, or shots are aging themselves a lot when they drink a lot of alcohol. Alcohol can make you sick if you drink too much.”

First-place eighth-grade entry winner Katie Conklin’s essay stated, “plan out what you are going to say before facing the problem. Be confident in yourself and think about your future.”

Both Katz and Conklin, as well as the other seventh- and eighth-grade winning participants, are all students of Calvary Christian Academy. In all, 224 essays were collected and reviewed from the area schools.

The winners will be presented with trophies at an awards dinner Feb. 17, 2017, at the Elks Lodge. The first-place entries from each age group will advance to the District Elks competition, and then on to the State Elks competitions if selected.

The Elks 2016-2017 Drug Awareness Poster Contest was among third-, fourth- and fifth-grade students in Havasu who are involved with the Parks and Recreation’s After School Program. In all, 70 posters were entered.

Among the third-graders, it was Kaylee Brawley, of Nautilus Elementary, who won first-place. Second-place winner was Morgan Johnson, of Oro Grande; third-place was Dylan Paull, of Starline Elementary; and Honorable Mention went to Emily Dosey, of Havasupai.

The poster contest winners were honored during an awards dinner on Oct. 24 at the Elk Lodge.

The Elk’s 2016-2017 Americanism essay contest entries recently were collected and review processes have begun within the Lodge. The essay question for students was ‘why is it important to vote?’. The hundreds of entries are read, 30 at a time, by designated committee members. Each member selects the top four of their 30. The collection of top entries is pooled and judged by an Elk member who is a local teacher.

Throughout each year, the Elks Lodge is involved with many youth and other activities in their ongoing efforts of giving back to the community. Activities include scholarships for youth programs in Havasu; youth dance parties at Parks and Rec; the Family Splash event in May, Summer Camp Mega Water Day; pot luck dinners; Law and Order night to honor local police; a youth soccer shoot; Fright Night; and Kids Turn to Shop holiday event.

The next youth event is the Elk Hoop Shoot, which is part of a national basketball contest. It is set for Dec. 15, at the Aquatic Center during the Parks and Rec After School Program. Admission is free.