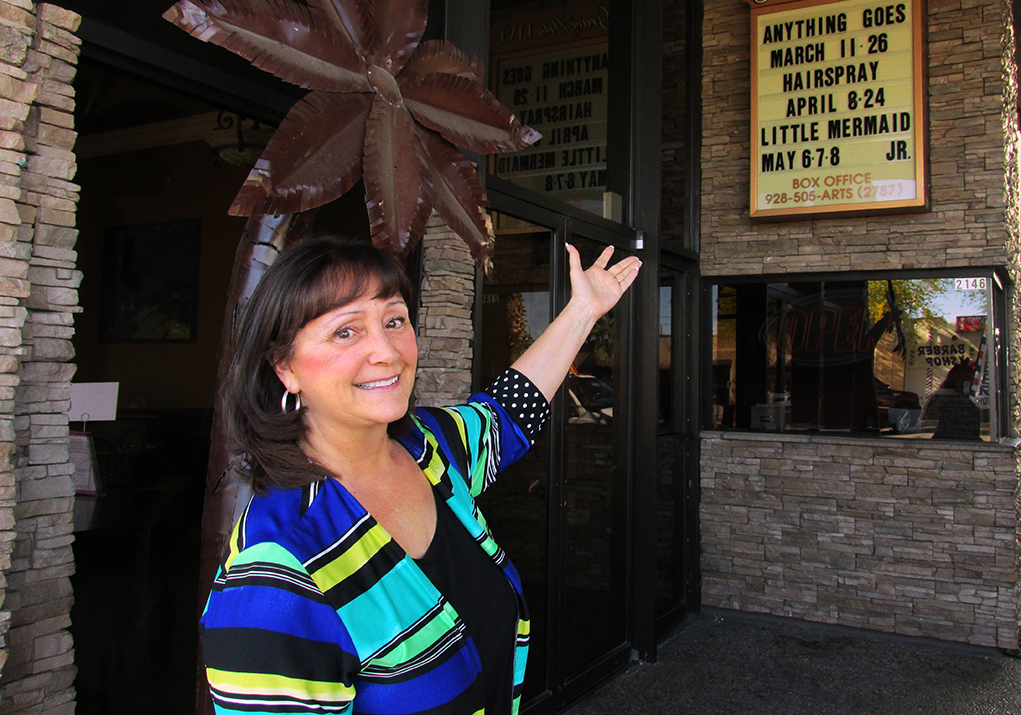 Grace Ann, who is the owner/producer at Grace Arts and the owner of Arizona Coast Performing Arts dance studio, moved to Lake Havasu City 28 years ago. Today, she has four grown children including three boys and a girl. Grace Ann also has 11 grandchildren, and a black-and-white Standard Parti Poodle, who is 6-years-old. His name is Larry. Recently, she sat down with RiverScene Magazine to answer 20 Questions.

2.) If you were to buy candy, what would you pick? “Milky Way. Anything chocolate, actually, but that’s one of my favorites.”

3.) Do you have a habit you’d like to break? “I would like to not be so reactionary. I would really react when I was younger, but now I’m working on that.”

4.) Favorite beverage? “Iced Tea. I pretty much live on that.”

5.) What is the most recent photo on your phone? “My mother-in-law’s new puppy, Prince. It is the grandson of my own poodle.”

6.) Favorite local restaurant? “It’s a toss-up between Juicy’s and Shugrue’s. They are very different places, but both are very good.”

7.) What is your dream destination vacation? “Europe. Spain. The Basque Country. It’s in the Pyrenees Mountains between France and Spain. My family is from there, and I still have distant relatives on the Spain side.”

8.) What is your favorite article of clothing? “I like flannel. My flannel nightgown.”

9.) What is a dessert you daydream about? “If I was going to cheat for the day, it would be cheesecake, with cherries on top.

10.) What is your favorite event in Havasu? “Winterfest. I like it because there are lots of artistic vendors and lots to look at. It’s not just the energy of the locals but the visitors, too. People stop by the theater and peek and look.”

11.) Who do you ask for advice? “For personal advice, it will always be my husband. For business advice, I have an amazing team of business people, friends, and sponsors.”

13.) What is one thing that must be on your grocery list? “Yogurt. Cherry and peach are my favorites.

14.) In what city or town were you born? “San Juan Capistrano, California.”

15.) If you could be any age for one week, what age would you be? “I think 30 is the perfect age … you’re still young with energy and physical strength. You have what you need to work hard every day. As you get older it gets harder to do those things.”

16.) Do you have a dream theater production that you’d like to do? “I’d like to do ‘Mary Poppins’ and ‘Mama Mia’. I plan to create and produce them here. It is difficult and challenging to do in on my little stage, but I plan to do them.”

17.) What is your favorite pastime? “Boating. We spend a lot of time on the boat in the summer. That’s when I have most of my free time. That’s why we moved here. We liked waterskiing, boating and camping … we have great memories.”

18.) If you were a zoo animal, what would you be? “Mama Bear. I’m protective of my kids and grandkids, and my theater kids. I try to protect them and do the best for them to prepare them to get those opportunities that they work hard for.”

19.) What cheers you up? “Being with friends, playing a friendly game of poker, listening to a band somewhere, or going to Las Vegas and hanging out on Fremont Street. I like downtime with friends. And, my grandkids, I love playing and spending time with my grandkids.”

20.) What is your least favorite food? “I won’t eat liver. I used to hate avocadoes, too, but I’ve been starting to like them.

Grace Ann is in her ninth production season at Grace Arts. Each season hosts about 15 productions, including six main season shows, five children’s productions, two charity fundraisers and a youth summer workshop. All actors and much of the staff are volunteers.

Many of Grace Ann’s theater kids grow up onstage before the very eyes of the audience. Some of those theater kids have gone on to audition at colleges spanning the U.S. A few make their way back to Grace Ann, and help out with productions on her beloved stage in Havasu. Grace Arts is at 2146 North McCulloch Blvd., in Havasu. For more information, call the theater at 928-505-2787 or visit www.graceartslive.com.