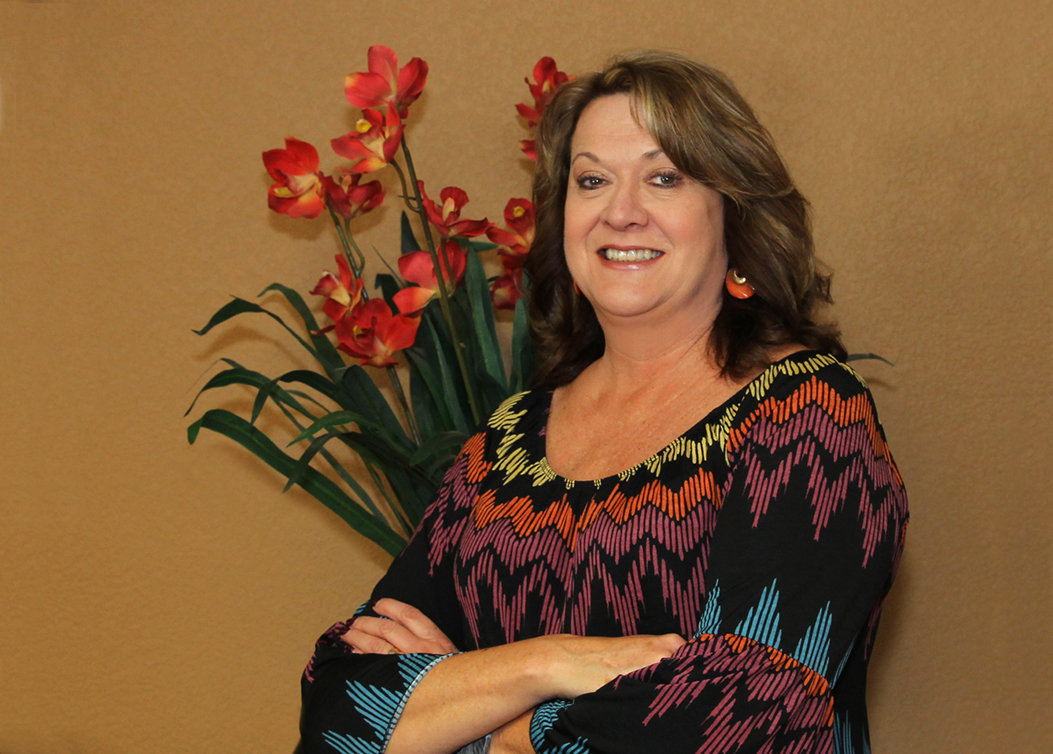 If you ask, she’ll show you the tiny pair of red-ruby slippers that she keeps on her work desk. Lisa Krueger, a Kansas native, has lived in Lake Havasu City and Parker for a combined 30 years. She has worked as a chamber of commerce executive for at least 20 years, including heading the Parker Chamber of Commerce for six years before making the move to Havasu.

Since, Lisa has led Havasu’s Chamber of Commerce team for 15 years. She has been married to local attorney Philip Krueger for 34 years. They have one daughter, Kim, and four grandchildren. The couple also parents a Pomeranian named Lucky.

1.) What is your perfect pizza?  “I always like the combo because I like vegetables and meat. Whenever I call to order, I’m like, ‘I’ll take the combo’ and they usually say we don’t have a pizza named ‘The Combo’.”

2.) If you were to buy candy, what would you pick?  “Chocolate. My favorite would be a Snickers bar. Not chilled, just straight off the shelf.”

6.) Do you have a favorite television show or series? “I watch everything on the Food Network except for baking. I don’t like to bake. It’s too exact with the science of it.”

7.) What is your dream destination vacation? “Hawaii. I’ve been there four times and I would go back there in a moment’s notice. I’d go to Maui.”

8.) What is your favorite article of clothing? “I have a long-sleeved V-neck blue sweater that I’ve had for 20 years. I pull it on every night after I get home but I can’t wear it all year around.”

9.) What is a dessert you daydream about? “I love Derby Pie. Barley Brothers has it; it’s like a brownie with pecans and frosting.”

10.) What is your favorite event in Havasu? “Winterfest. I love it because there is something for everyone. Everybody is happy, and the weather is beautiful. It brings everyone together.”

11.) Who do you ask for advice? “I probably ask my husband Phil the most for advice. I also ask about work-related advice from the chairman of our board and the last several chairmen, like Mike Bonney and Tim Miller. They’re all just great people to work for. And my daughter Kim. I ask her, too.”

15.) If you could be any age for one week, what age would you be? “I’m pretty happy where I’m presently at, but I would say probably 35. You’re not a kid anymore but you don’t feel like you’re aging. Wise but not wrinkled.”

16.) If you could remodel your home, where would you begin? “I’d get new kitchen cabinets. I love my kitchen. It’s my favorite room of the house but the cabinets are falling apart.”

18.) If you were a zoo animal, what would you be? “I think I would be a giraffe. Not to look down on others like I’m a snob but so I can look and see all around. I like to be in the know.” 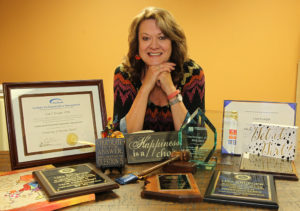 Lisa poses with things from around her office that makeup up some of who she is including awards, her love for chocolate, and even a Transformer that her grandkids play with. Jillian Danielson/RiverScene