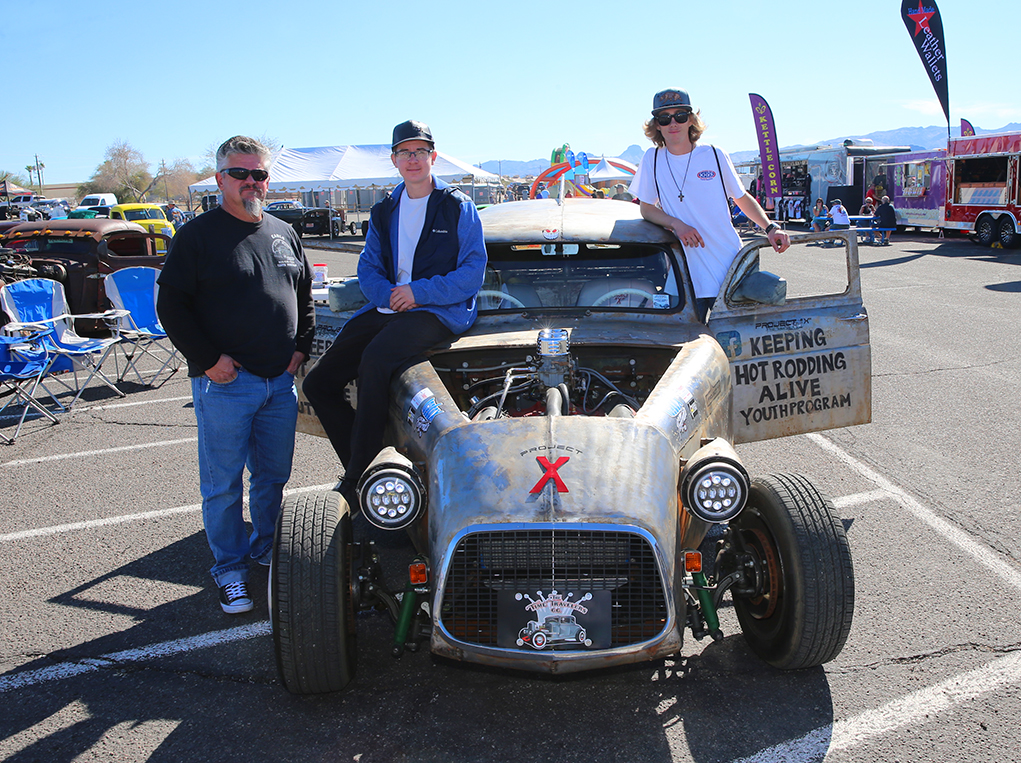 Visitors to Rockabilly Reunion last weekend in Lake Havasu City should have no questions about what some area youth have been up to lately.

A group of high-school aged kids displayed a project they created through the Keeping Hot Rodding Alive program that was developed by Kenny Earls in the Kingman/Golden Valley area.

“I started this program three years ago to reach out to kids. It is a free program for high-school aged kids from ninth grade to 12th grade,” Earls said.

The 501c3 nonprofit program is not tied in with any schools and is offered after school on Fridays. “It’s keeping our hot-rodding dream alive, but the other thing is to give them a skill they can take with them after high school,” Earls said. 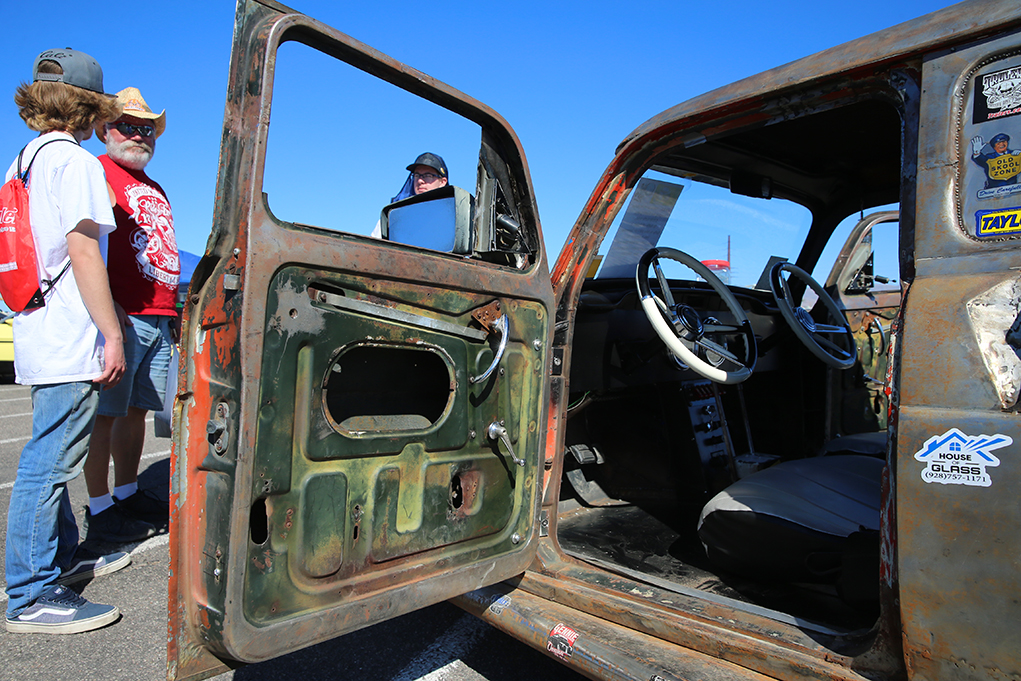 The program participants learn welding, fabrication and more. “There’s a lot of sheet-metal fabrication. One student is learning upholstery.”

Heavy Equipment Machinery in Golden Valley sponsors the group, donating a corner in its building where the work is done.

“They say hot rodding is a dying art and my thing is push and keep our art going but give the kids a skill, too.

Earls said the kids came up with the design of the vehicle they built. I donated the car.” 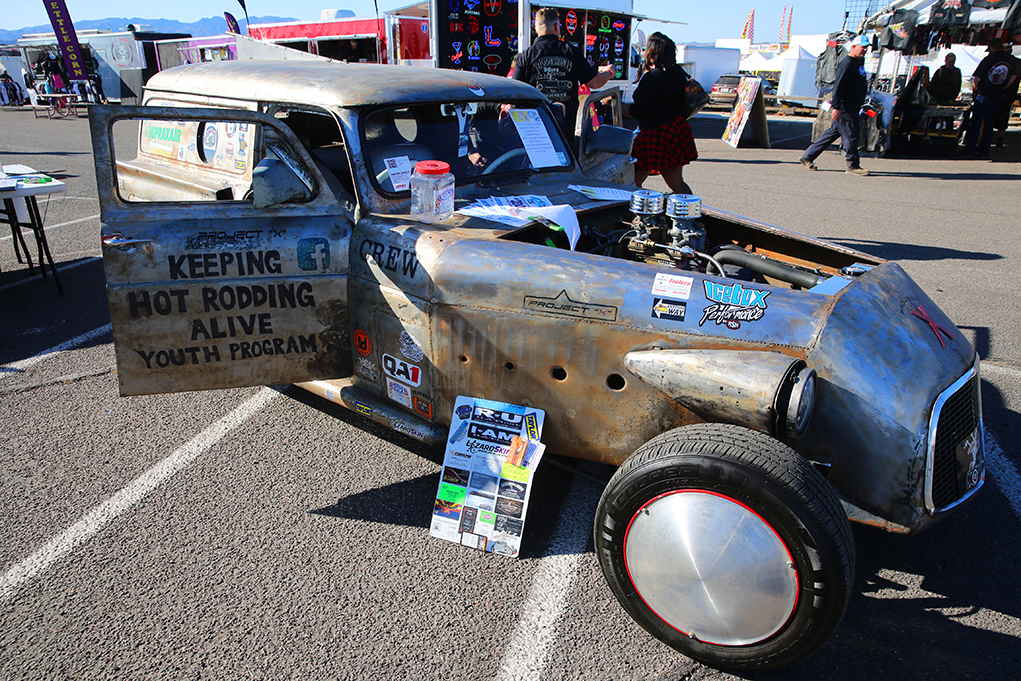 The Space Rod on display at Rockabilly Reunion. Jillian Danielson/RiverScene

The group was invited to go into the International Ratical Ride Build Off Drive Off Road at the Specialty Equipment Marketing Association (SEMA) show.

“Teams from across the country, Canada, UK, New Zealand, Australia were there. We’re the first youth and only youth that competed last year in this annual build off. It was really cool,” Earls said.

“Win or lose, we’re not worried about the competing we just want to go and do something to show the work they did, and they did awesome. That car has just grabbed attention everywhere we go.”

“We had to get a team together to build the car. Once Kenny got the team together, we had to find a car to build. Once we got that, we just started busting butt to get it built,” Lynch said. 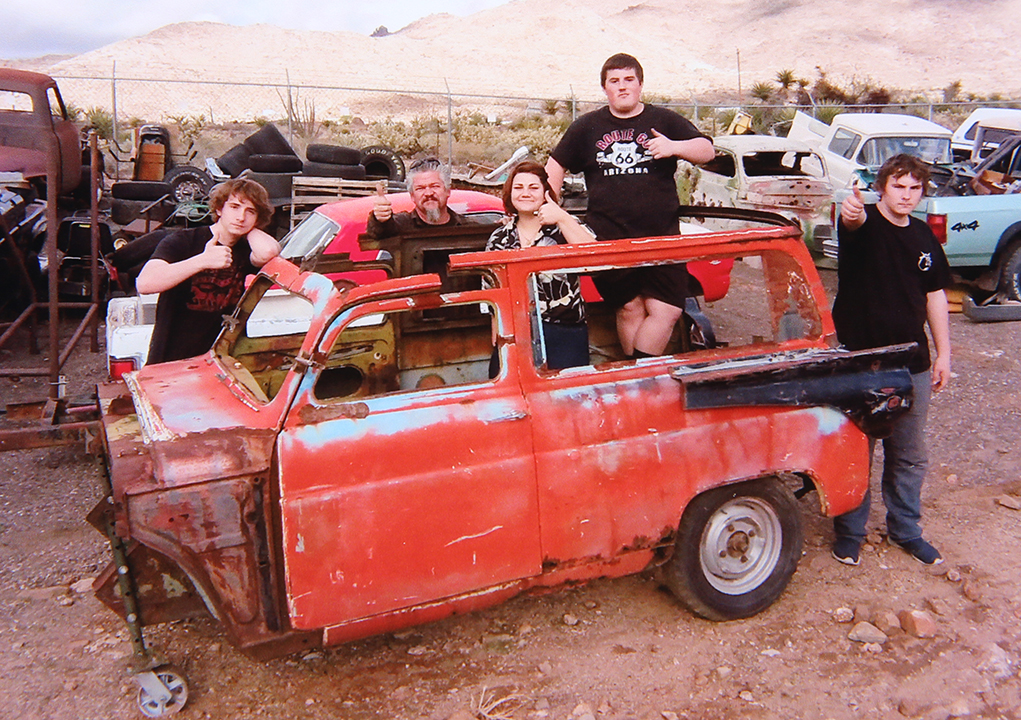 The frame of the Space Rod before it was rebuilt. photo courtesy Kenny Earls

The rod started out as a ‘57 British Ford Anglia. “Just the body. No roof, no windows, no floor, no frame, nothing – just the body. Bit by bit, we started getting more and more going on this car and once we got a frame, we put the body on and then started just going from there … going to town,” Lynch said.

The eight high school students had 10 months to build the car in time for the SEMA show.

The car was built with an eclectic collection of parts. The front half of the frame is Toyota and the back half is a Dodge D50. The front suspension is Model A with a 1932 Model A front end. The back end is a ‘61 Chevy Impala. The motor is a 1965 318 Dodge Poly with a 727 Torque Flight transmission. More parts continued to be added.

Well-known automotive customizer and fabricator Gene Winfield reached out to the group. 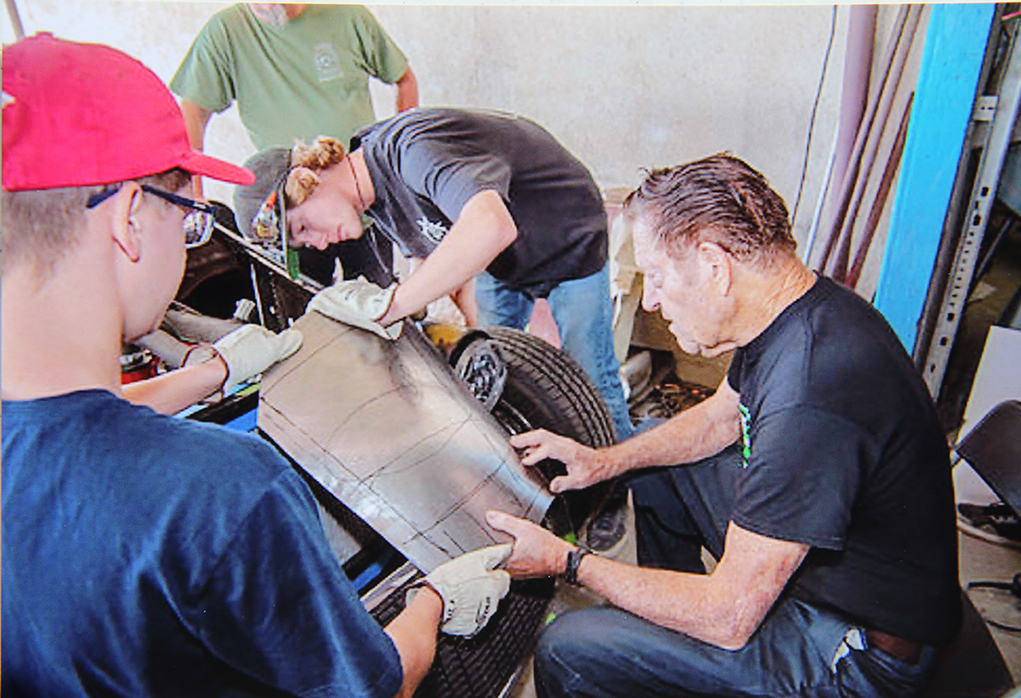 “He’s a legend. He did the captain’s chair and control panel from “Star Trek” and he did Cat Woman’s car from “Batman and Robin”, Kit from “Knight Rider”, and the chrome robot in “Terminator” as well as customizing the DeLorean in “Back to the Future”,” Earls said.

“We went up there (to Winfield’s home in Mohave, Calif.). While we were there, he showed us what to do and we got going on the nose and grill. We got the grill in,” Lynch said.

The grill is a 1957 Studebaker grill flipped upside down. The roof is also a Studebaker we had to cut the roof in half and cut off a little bit of that to get it fit on the Anglia. The steering wheels were custom-made for the car by one of the sponsors – Contour. 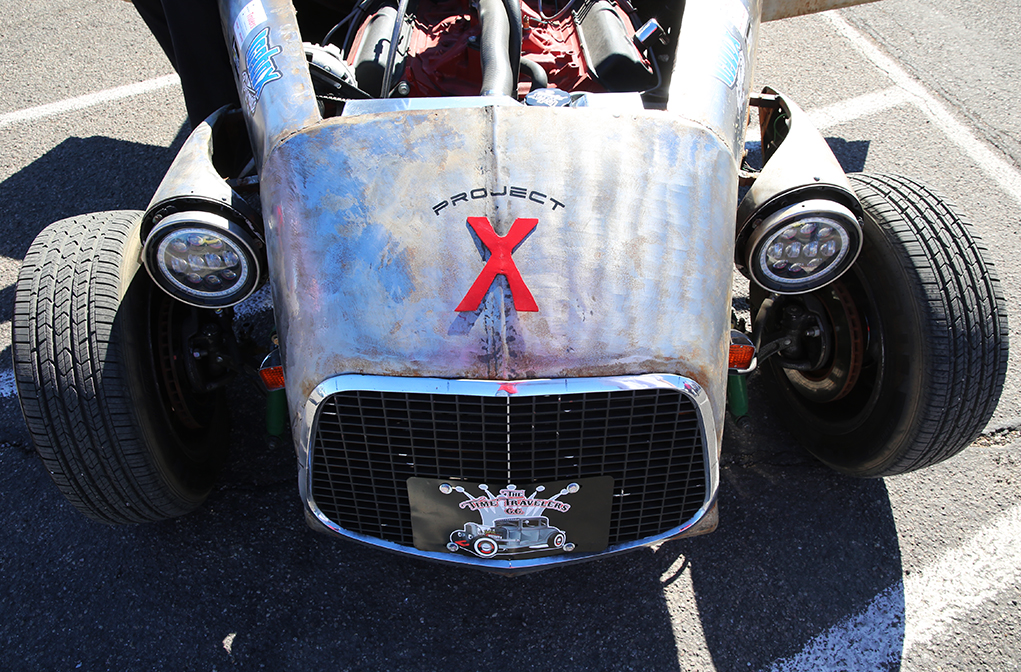 The front of the Space Rod car that Gene Winfield helped put together. Jillian Danielson/RiverScene

Keeping Hot Rodding Alive will raffle off the car. Raffle tickets are $30. Half the money raised will go to teen-needs programs like homeless teen shelters, drug and alcohol rehab centers and for abused teens. The other half will go back to the program.

“It shows these kids are giving back to the community,” Earls said. “We’ll do another car next year to raffle off.” 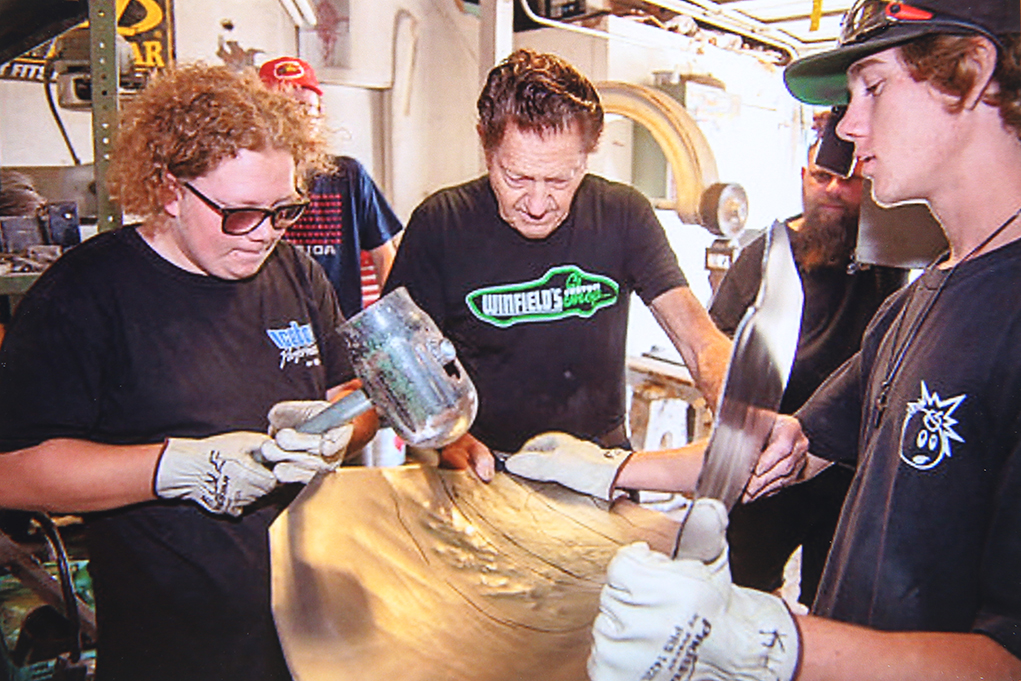 Keeping Hot Rodding Alive Havasu is not limited to kids from the Kingman/Golden Valley area, and it’s comprised of both boys and girls. 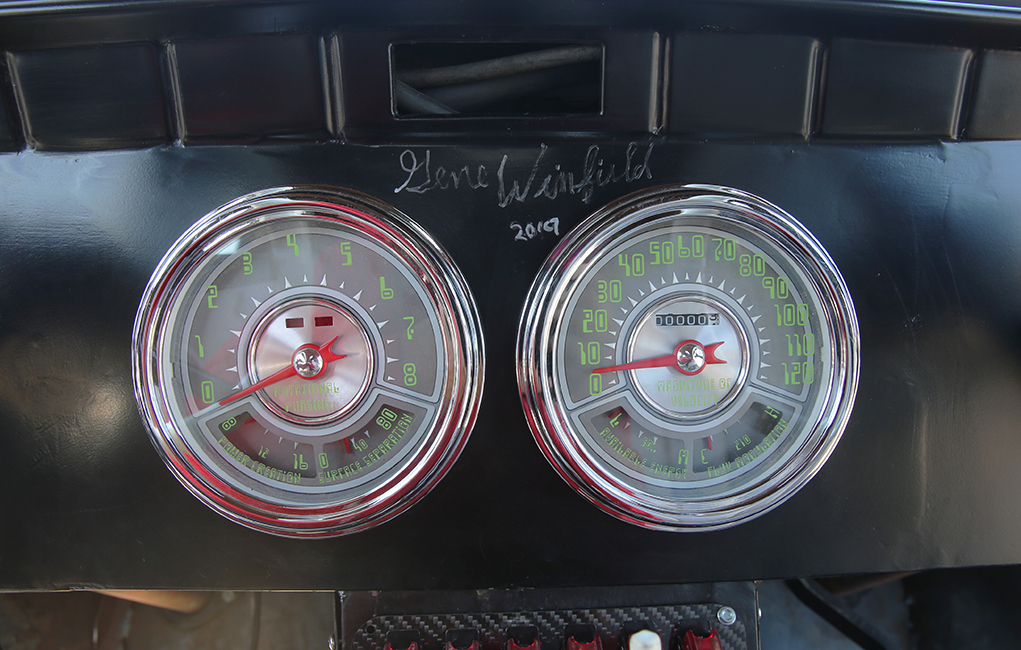 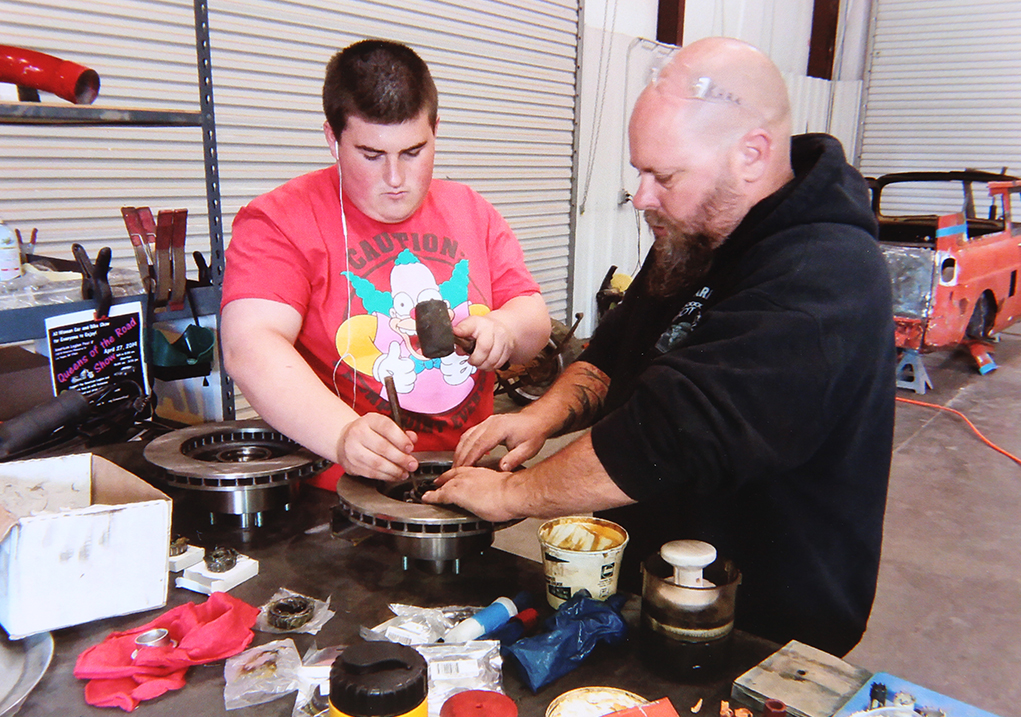