AZ 12 News Visits Lake Havasu For ‘Everywhere A To Z’ 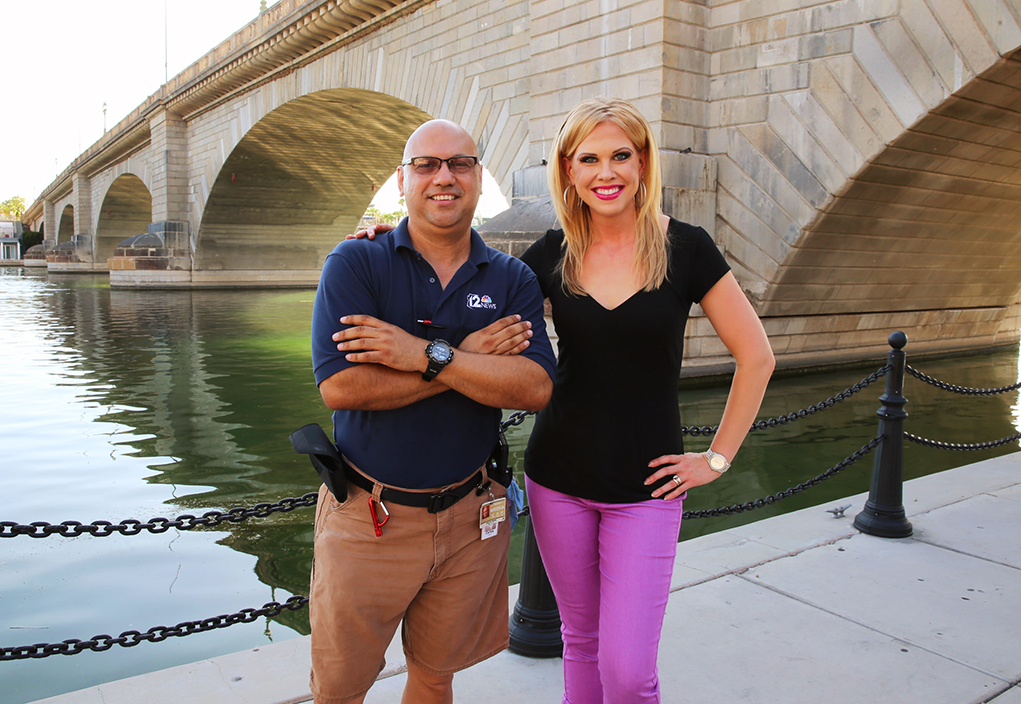 Lake Havasu City is getting its moment in the summer limelight.

AZ 12 news visited the town to find the unique oddities, special bites and delightful drinks to be spotlighted on their lifestyle feature “Everywhere A to Z.”

The feature highlights different areas in Arizona to find what makes those places special. For the upcoming multi-segment installment, the Phoenix-based news station visited Kingman, Lake Havasu City and Parker.

The crew of meteorologist, Krystle Henderson, photographer/editor, Carlos Chavez, and  videographer, Will Pitts, started their three-day trip in Kingman.

There, they shot their reveal under the Kingman arch on Route 66 to announce their most recent location for the upcoming installment. They also visited an alpaca farm that is open to the public.

The self-proclaimed “one-man-band” crew then headed to Lake Havasu for a multiple day visit.

“With a one-man band, it’s just [a few of us] doing everything. Real crews have like six people and come two hours before. With this, its just me,” shared Chavez.

The first stop in Lake Havasu was an exclusive tour inside the London Bridge. They wanted to give viewers the behind-the-scenes tour inside the largest antique ever sold to get a new perspective on the historic landmark.

RiverScene went inside too! Check out our Facebook Live Here!

Later that same day, they took a very special ride in the Lake Havasu City Properties amphibious car. The “Amphicar” can drive on both land and water. Henderson was given the tour under the bridge by vehicle owner Dean Baker.

Want to know about this cool ride? Click Here!

After they returned to the shore, the next adventure was one with a little more beat. Local entertainment specialists, Boom Bandits, met with 12 News at Rotary Park to show off the most booming ride in town, the “Rave Rover.” This super hero inspired ride is equipped with some serious audio, lights and style. The crew got to feel the essence of the Lake Havasu party spirit in the vehicle.

Want to check out this bumping drive? Click Here!

Once the party settled down, Arizona 12 News visited one of the more calm and sentimental aspects of the city –  the lighthouses. A pride of Lake Havasu, there are 26 lighthouses that line the waters. The crew visited several to understand the individuality of each lighthouse.

“I got to paint one and put the light bulb in. That was really special,” Henderson said.

The next morning, the crew was back out again, this time with a taste for what sets Lake Havasu apart culinarily.

The first spot of the day was at the South Side sandwich hotspot, Panarelli’s Subs. Henderson went one-on-one with owner, Michelle Panarelli, to learn the art of Italian sandwich making.

After lunch, it was time for dinner and drinks, or the how-to’s anyways. The crew went to London Bridge Resort to try some of the finer delicacies of Lake Havasu. They began their tour of the tastes of the resort at Kokomo Havasu to see how the nightlife (or daytime partiers) drink in style. 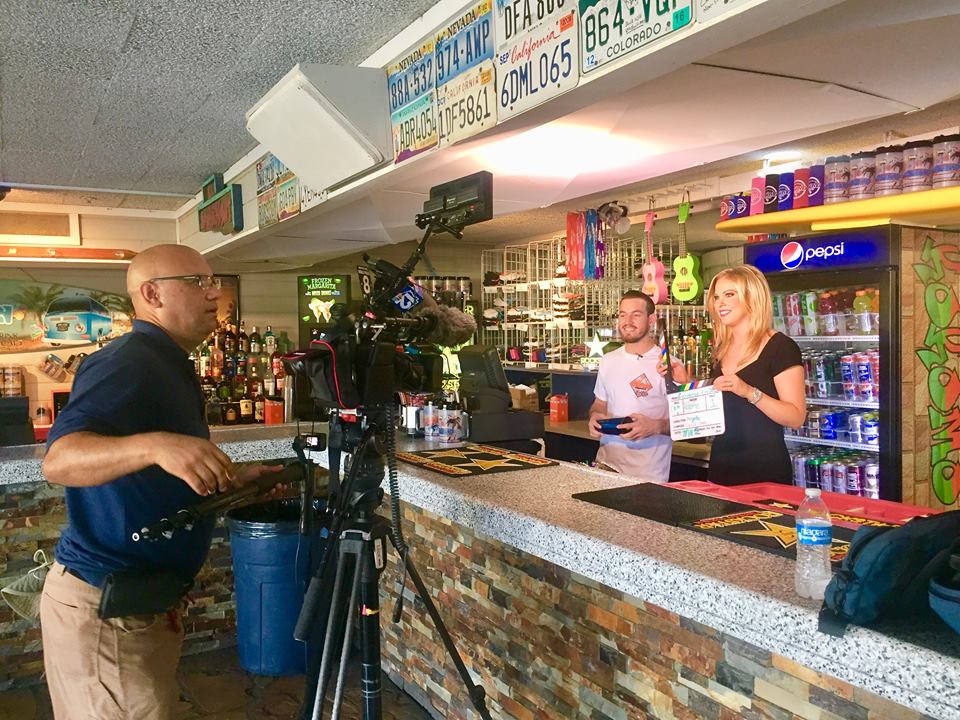 Specialty party drinks were made at Kokomo Havasu. Grace Usher/RiverScene

“I don’t just want to see them make it but I like to get into it and make it myself,” Henderson said.

Heading inside, it was time for a bite in the kitchen of Martini Bay to witness the fine dining of the restaurant. Head chefs, Angie and Renee, showcased the top menu items.

After dinner was served, it was time for evening drinks. The crew went to the bar side of Martini Bay to create the signature art pieces of cocktails. With decorated glasses, key ingredients and a unique design to top if off, the crew got to really see the finer things Lake Havasu City has to offer. 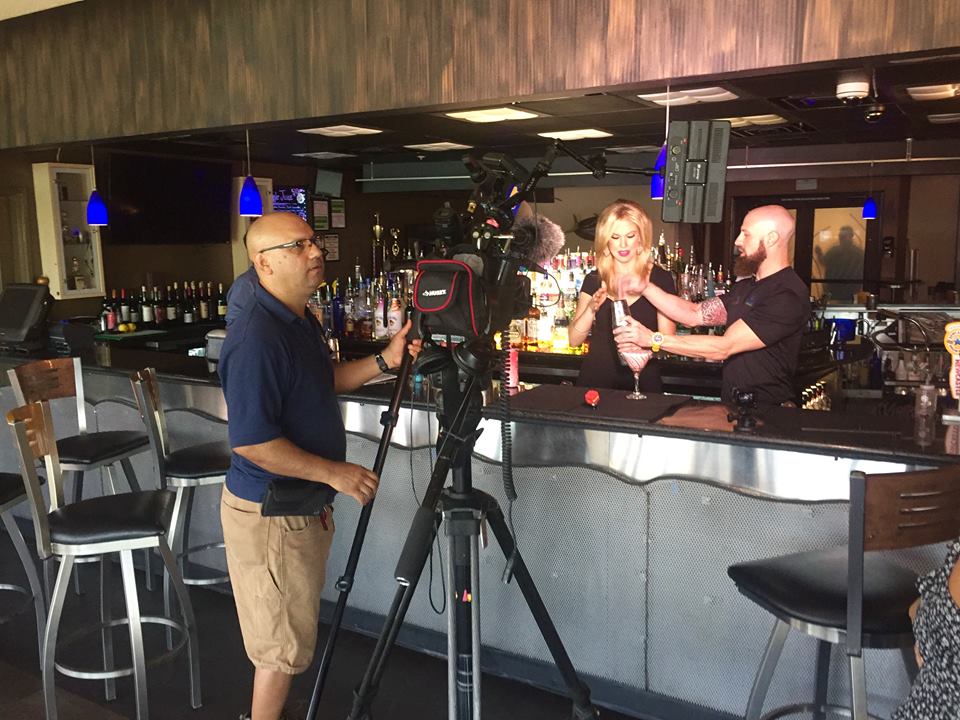 The Lake Havasu City leg of the three-city tour was full of the odd, exciting and some of the special features of the small town. It was each member of the crew’s first visit but it was expressed that it will surely not be their last.

“My favorite thing about the Arizona scenery is the majestic mountains and I love water. To see the two together was just amazing.I could just see out on the beach and just take in the scenery all day long, it’s just so beautiful. The people have been amazing. I can’t wait to come back.” said Henderson.