Balloon Fest Pilots Love LHC, But What Do They Do? 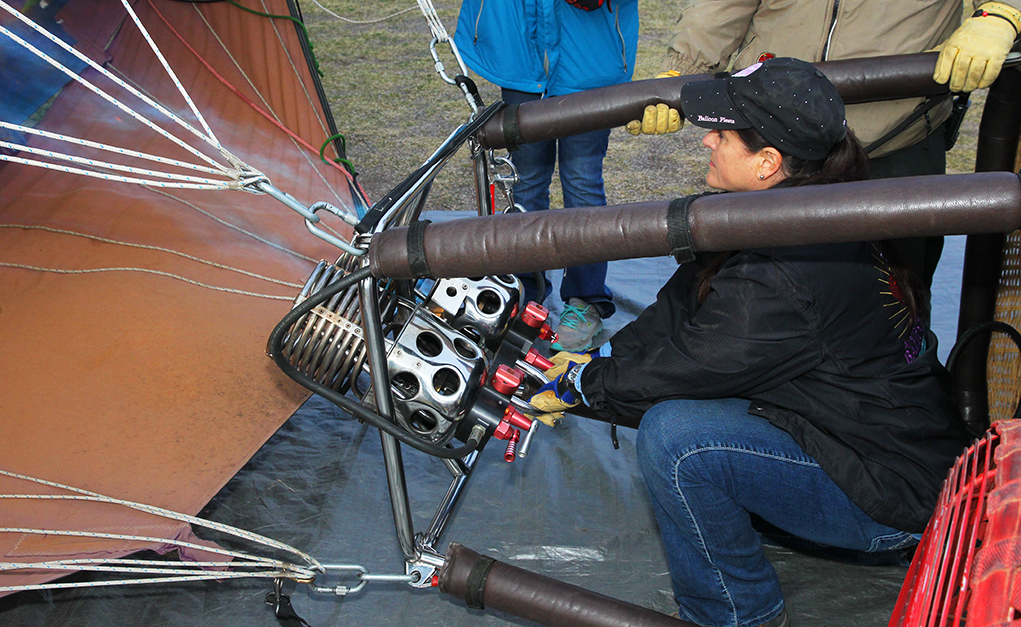 The Havasu Balloon Fest pilots are beginning to arrive in Lake Havasu City with a handful visiting local schools today and showing those gathered a “candlestick burn.” It seems many have one thing in common – they love flying over Havasu.

River Scene Magazine wanted to know just what it was that draws them to Havasu year after year and what it is that they do with their days when they aren’t being hot air balloon pilots. 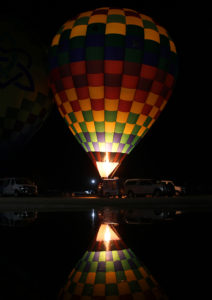 Peggy Watson, of Santa Paula, Calif., who is the pilot of “Starlite,” retired from a biotech company called Amgen in October 2016. She lives in a farming community, which is an orchard of lemon and orange trees. And she lives inside an airplane hangar.

The spacious, open design has all the furnishings of any luxury home including tile floors, full kitchen, comfortable living room, and upper loft areas.

“When I’m driving in here (to Havasu), I see the crisp, clear sky,” she said. “It’s a great view with the water and the mountains and the desert all together – it’s just pretty.”

This is Watson’s seventh trip to Havasu for the local Balloon Fest.

Jason Gaines, of St. Louis, Mo., is the pilot of “Cheaper Than A Wife.” Gaines has owned a hot dog business for 12 years. 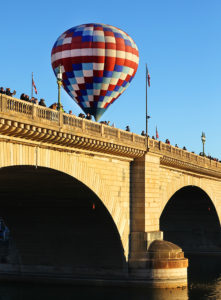 Jason Gaines flies his balloon “Cheaper Than A Wife” over the London Bridge. Jillian Danielson/RiverScene

“I play with (hot dogs)  and balloons,” he said. “I own hot dog stands inside all of the local Home Depots.”

This time of year, it’s the weather that draws him each year to Havasu Balloon Fest. This is his fifth year in a row attending.

“A lot of my favorite, fellow balloon pilots come here, I love this time of year,” Gaines said. “I go to five events a year and this is one of my favorites.”

Sheldon Grauberger, of Las Vegas, Nev., who is the pilot of “Kaleidoscope,” works as a balloon pilot and flies huge hot air balloons filled with tourists high above Sin City.

“The balloon I fly is about five times larger than the average balloon,” Grauberger said.

An average hot air balloon envelope, which is what hoists the basket, is measured at about 54,000 to 77,000 cubic-feet of air capacity. The large hot air balloon Grauberger flies for his job in Las Vegas is 11-stories in height with the air capacity of 310,000 cubic-feet of air space. It weighs 19,000 pounds without any people in it. Its basket can carry as many as 16 passengers, but mostly a dozen go together at a time. Grauberger’s Las Vegas launches can be twice daily, but most often he launches once per day. He has been doing the job for 13 years.

It was within his 23 years working real estate with Re/Max that brought him into the world of ballooning. He has been driving for Uber and Lyft for the past year in Las Vegas and has met all different types of interesting people, he said. 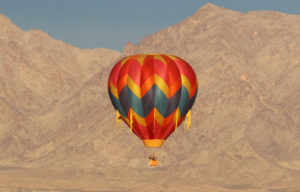 Debbi Waltman, of Windsor, Colo., is the pilot of “No Worries!!” She is retired from a career of corporate fundraising and attends about 15 ballooning events annually. Waltman also spent many years doing infant foster care before retiring and becoming a full-time hot air balloon pilot.

“I just love flying in this area, it’s gorgeous,” Waltman said. “It is so much fun getting towed back in by a boat, I love it. The people here are fantastic.”

Gary Moore, one of  this year’s Balloon Fest balloon meisters, is of Havasu. He is the pilot of “Timepeace,” and retired from a career at General Motors. Moore doesn’t expect much flying in his hot air balloon during Balloon Fest because he will be busy keeping the other pilots safe. 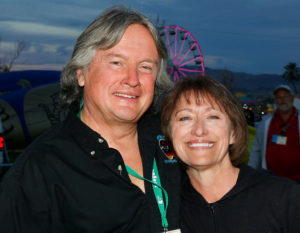 Gary Moore, along with his wife Diana, pose for a photo. Jillian Danielson/RiverScene

“I sat down with the Lions clubs and Rotary seven years ago, and e started this thing,” Moore said. “This year, the challenge is going to be the weather. We’ve had good weather over the years, and we’re hoping to get a flight or two in. Safety is really our thing.”

Dean Baker, of Havasu, is the pilot of “Miss Hannah”. This is his sixth year piloting a hot air balloon during Balloon Fest.

“That’s how I got into ballooning, I came to the first one,” Baker said of Balloon Fest. “It’s really a challenging place to fly, it keeps you on your toes. You really can practice your skills here. It’s a lot different than flying into a farm field. There are obstacles. But, it’s beautiful with the Lake.”

Baker spends his days selling real estate and is the owner/broker of Lake Havasu City Properties, in Havasu.

Dave Reineke, of Mahomet, Ill., is the pilot of the special-shape hot air balloon “Pegleg Pete.” Reineke has attended Havasu Balloon Fest since its inception but this is the first appearance of “Pegleg Pete” in Havasu. 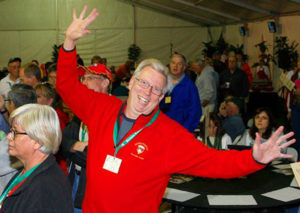 Dave Reineke poses for a photo during a pilot meeting. Jillian Danielson/RiverScene

The balloon is four years old and attended nine events in 2016, all of which were in the U.S. “Pegleg Pete” also has flown over New Zealand, Australia and Canada so far when it comes his international affairs.

Reineke is retired from the restaurant business and the real estate business.

“Havasu is the best place in the world to be in January,” Reineke said. “There is no flying this time of year back at home. The people are wonderful here, and the weather usually is wonderful here. We might not get rained on, but we might see some wind.”

Betsy Kleiss, of Champaign, Ill., is the pilot of “4Ever39.” She is an artist who spends her days handcrafting and selling stained glass.

This is her sixth year attending Havasu’s Balloon Fest and she has made a lot of friends along the way, she said. 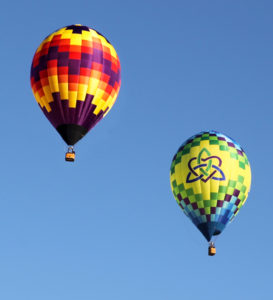 Betsy Kleiss, as well as Al and Evie Reusch, fly their balloons in the 2016 Balloon Fest. Jillian Danielson/RiverScene

“It’s a lot of fun to keep coming back,” Kleiss said. “Normally, we get to fly a lot. I’ve had a perfect stranger walk up to me and give me a gift and thank me for being here. This is a low-key event. It’s fun.”

Kleiss has been a hot air balloon pilot since 1997. The balloon she currently is piloting for Balloon Fest was new in January 2016. She caravanned out here from Illinois with three other pilots, each of different cities in that state.

The squad detoured from the 1,700-mile trip to see the sites of Bryce Canyon and Zion National Park in Utah. The normally two-day trip extended to  a five-day excursion.

The Havasu Balloon Fest is set for 6 a.m. to 9 p.m. Friday to Sunday at Nautical Beachfront Resort Golf Course. With weather permitting, there will be morning and afternoon mass ascensions and night glows. Admission is $15 for a three-day pass. Youth 14 and younger admitted for free. For more information and a full schedule of events, visit www.havasuballoonfest.com.