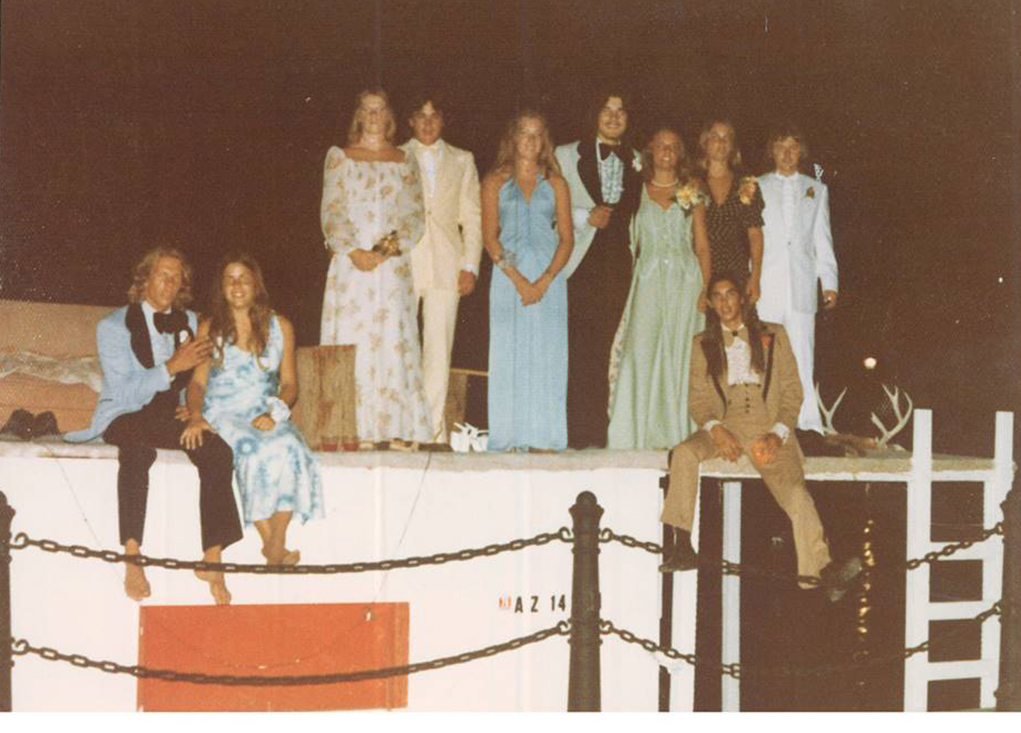 The stories of Big ‘N’ Crooked have abounded and entertained folks from Lake Havasu City for years. And many of those who launched the houseboat in 1974 gathered last weekend to reminisce and look to the future.

Dan Delasantos moved with his family to Lake Havasu City in 1971. A few years later, he got together with school friends and they began a daunting task of building a houseboat in Delasantos’ back yard.

“I got together with my school friends Steve Blundell, Brandt Bruner, Rick Sparks, Mike Thompson and Henry Hanson and we built Big ‘N’ Crooked from scratch. We were 15 years old when we built it in 1973 and put the boat in the water in October 1974,” Delasantos said. 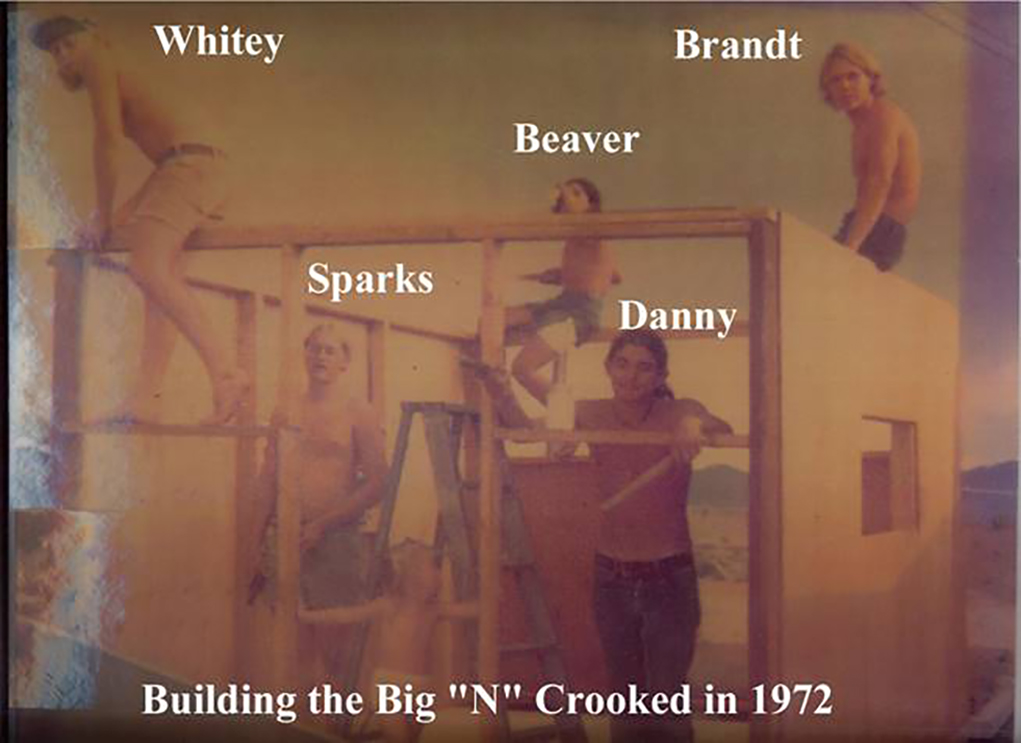 The builders of the Big ‘N’ Crooked pose for a photo in 1972. photo courtesy Dan Delasantos

He said they used scrap material they found around town.

“There were a lot of materials graciously donated. We didn’t have money to build it so we worked with what we had. Even the steering wheel was made out of a stick that you move back and forth which you can see in the model in the Lake Havasu Museum,” Delasantso said.

“People always wanted tours and to take photographs of the boat. We were known around town as the ‘Tom Sawyer Huckleberry Fins’ of Lake Havasu City,” Delasantos said. 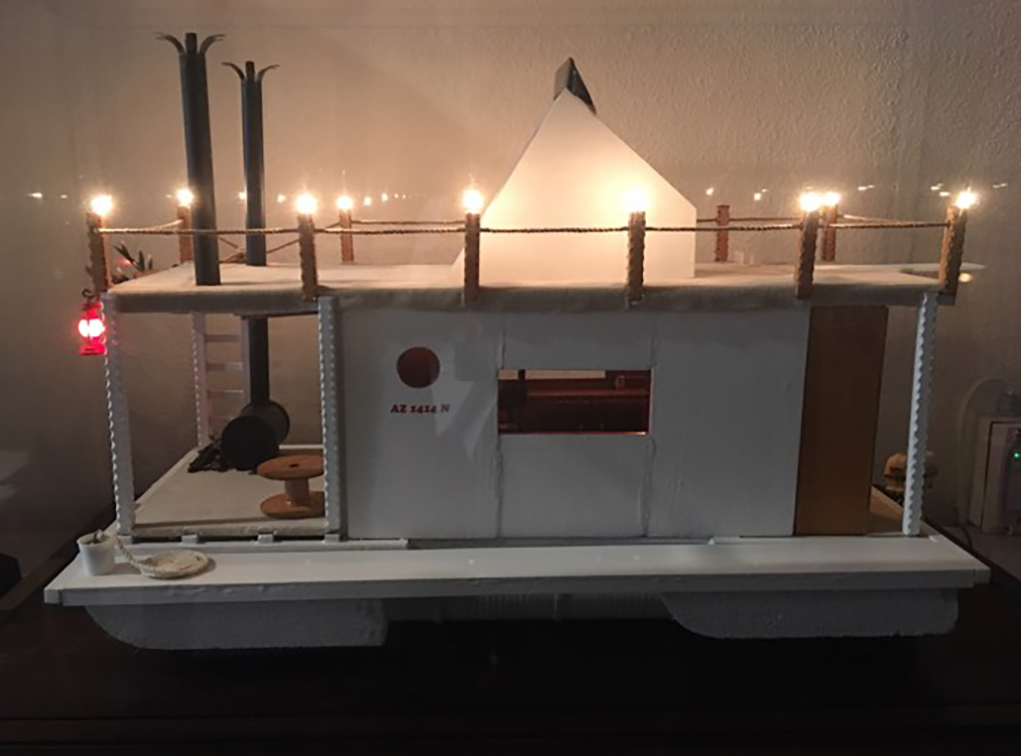 A replica of the Big ‘N’ Crooked sits at the Lake Havasu Museum of History.

The boat is 17 feet tall, 13 feet wide and 25 feet long. Over the years, people got together to raise funds to maintain the boat and help it stay afloat. Delasantos said Big ‘N’ Crooked was dismantled some 10-15 years after its launch.

The Big ‘N’ Crooked replica at the Lake Havasu Museum of History, 320 London Bridge Road, is exact in every way, down to the liquor posters on the interior walls. 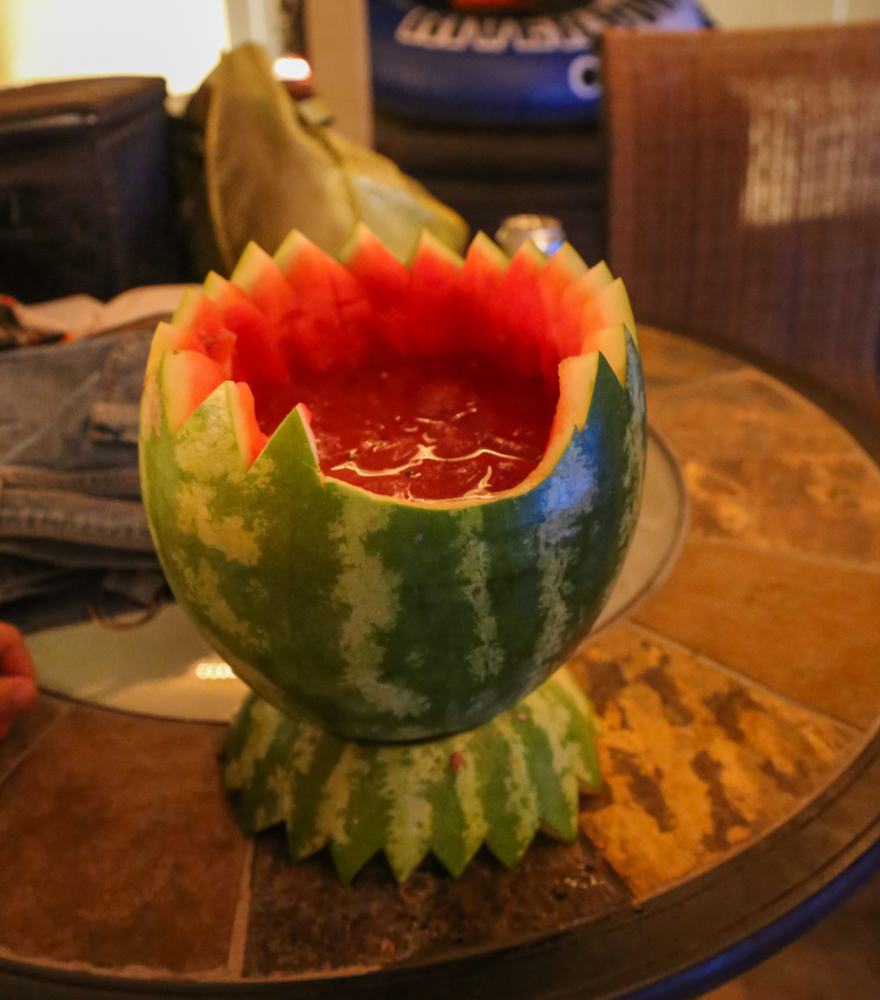 The “Hairy Buffalo” was the drink of choice on the Big n Crooked boat and is still being drank at reunion parties to this day. Rick Powell/RiverScene

“We walk into local establishments and say ‘Buffalo’ – 20 years later – and somebody in the bar will come back with ‘Buffalo,’ so local legend lives on,” he said.

“What the boat represents is being able to be a youth and being able to create something yourself -without restrictions – having the ingenuity and drive to do something that nobody else could do. It stands as an iconic element to remind other youth that don’t let things stand in your way to strive to move forward and do what you want to accomplish. This is something we wanted to accomplish that was within our means and even when it wasn’t we made it happen anyway, we had a lot of support from our parents and a lot of support from the community over the years,” Delasantos said.

Among those who worked on the Big ‘N’ Crooked every day after school was Brandt Bruner.

“I was one of the first few involved in building the Big ‘N’ Crooked houseboat. My favorite story is once we got it in the water we couldn’t take it out. There is an ordinance that you can’t leave a boat on the beach. We found Site Six and we moored it there for a few days and the state (parks) came by and said we had to move your boat,” Bruner said. 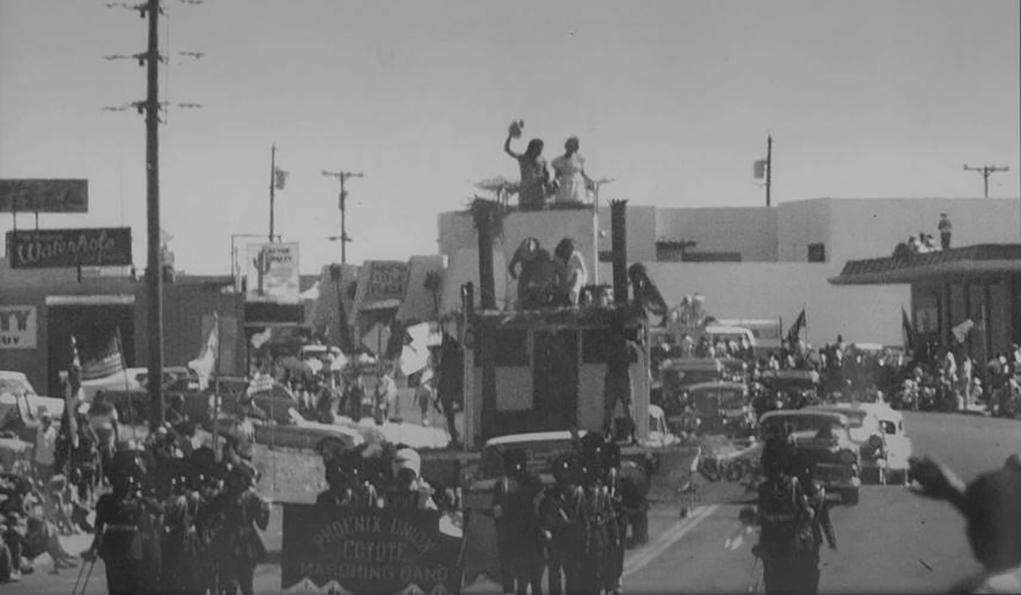 He went home and told his father who was at the time the vice president of operations at the McCulloch plant. His father said Site Six was McCulloch property and after speaking with the state park people the next day, the boys could leave the boat moored at Site Six.

Mary Jo Jewett, Dan Delasantos’ mother, spoke about the boat being built in her back yard.

“My husband was in sheet metal and the boys would start working every day about the time he had to go to sleep,” she said.

“When it came time to put the boat in the water, my husband was with Pitzer Air Conditioning. Pitzer was out of town and my husband went and got the crane truck. He wanted the thing out of the yard. It was a caravan going down Lake Havasu with about 20-30 cars with the crane truck and this thing on the back of it,” she said.

The boat was successfully launched and the rest is history.

One of the purposes of last weekend’s gathering was an announcement made by Delasantos. 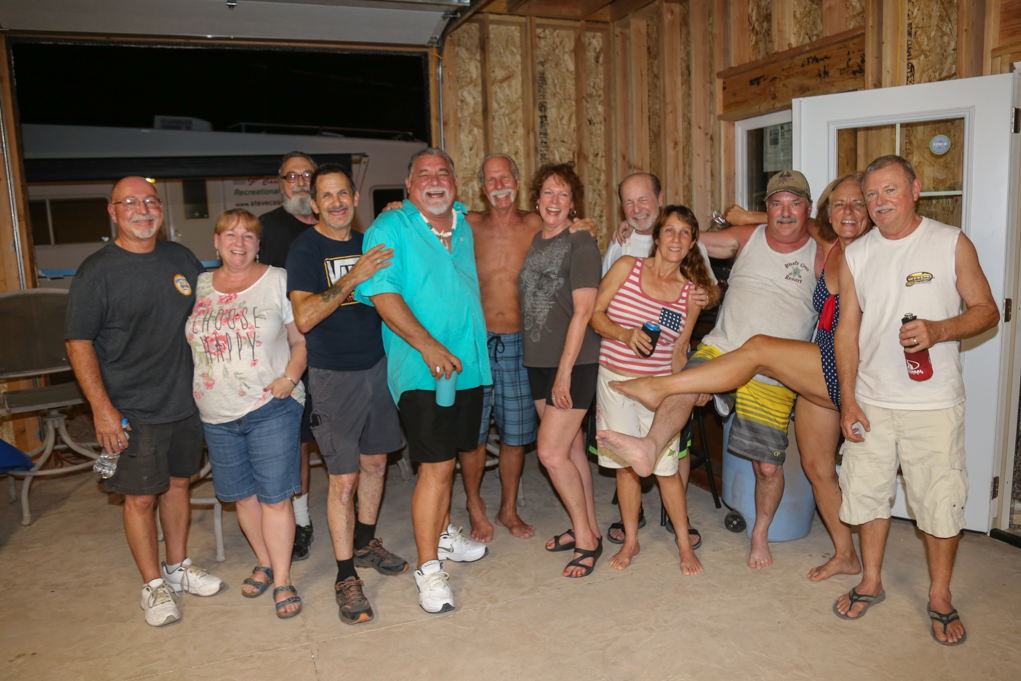 Most of the “original crew” of the Big ‘N’ Crooked gathered Saturday night for Dan Delasanto’s Birthday and pose for a photo near the new building at Delasantos’s home. Rick Powell/RiverScene

“The event this evening is I brought home the wood from C.V. Wood’s birthplace so I have all the barn wood from where C.V. Woods was born in Waynoka, Okla.,” he said.

Delasantos took down the barn in Waynoka, Okla., and brought it back to Lake Havasu City.

He is erecting a building in Lake Havasu City with that barn wood.

“It’s not completed yet, but it will be a great building and that will be a different story,” Delasantos said. 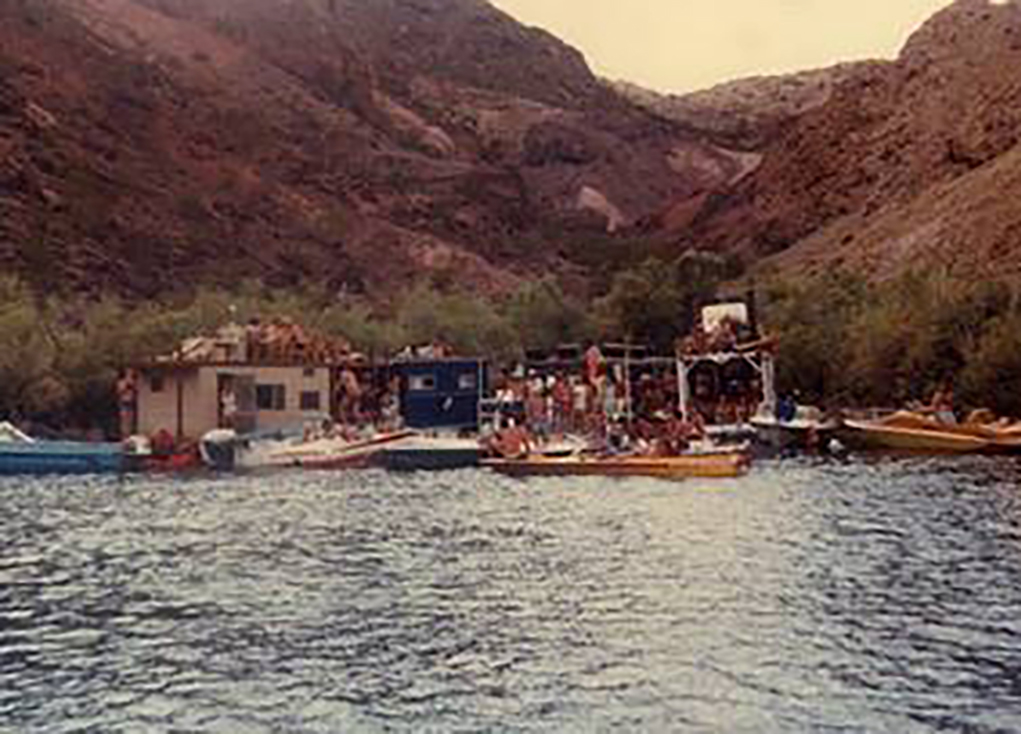 At one point in time, three homemade boats (pictured above) were all built in Lake Havasu and were put on the water together. photo courtesy Dan Delasantos

5 Responses to “The Big ‘N’ Crooked Legend Lives On”