Buses By The Bridge: Who’s Driving That Darn Van? 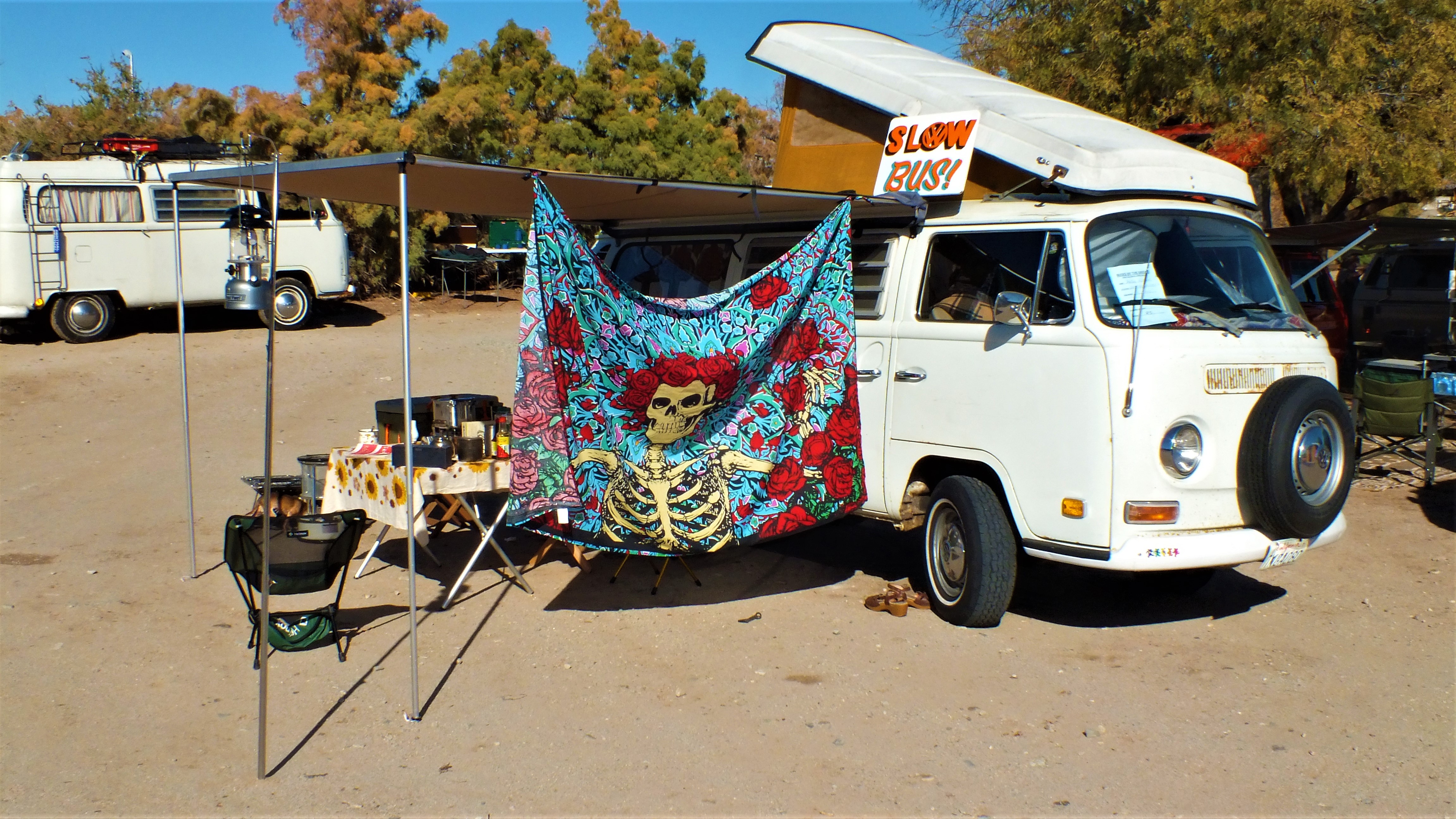 There is more than meets the grill of a Volkswagen Bus. Inside, secrets, adventures and stories abound. What truly makes the VW culture such an iconic community is not the vessels themselves, but the drivers behind every wheel.

Every January, the crazy, kooky and down-to-earth trek from across the nation to gather by a small desert lake to live and breathe everything VW takes place. Some sell goods, some mingle, and most camp out the good old-fashioned way. Though they all share a love for the revolutionary wagons, they each have their own  unique experiences to share.

Hoffman didn’t have to travel too far to pull into his sixth Buses by the Bridge. In fact, Hoffman, 20, is a born-and-raised Havasu kid who had a knack for cars and vintage lifestyle. Knowing this, his parents gifted his first car, a 1970 Volkswagen Bay Window.

With three motors, full suspension, wiring and updated interior, much was done to make “Murphy” the rolling space it is today. The blue and white van was even given a fresh face with tractor paint. The upgrades have gotten Hoffman and “Murphy” through a 15-day road trip from Arizona to Portland, Ore. 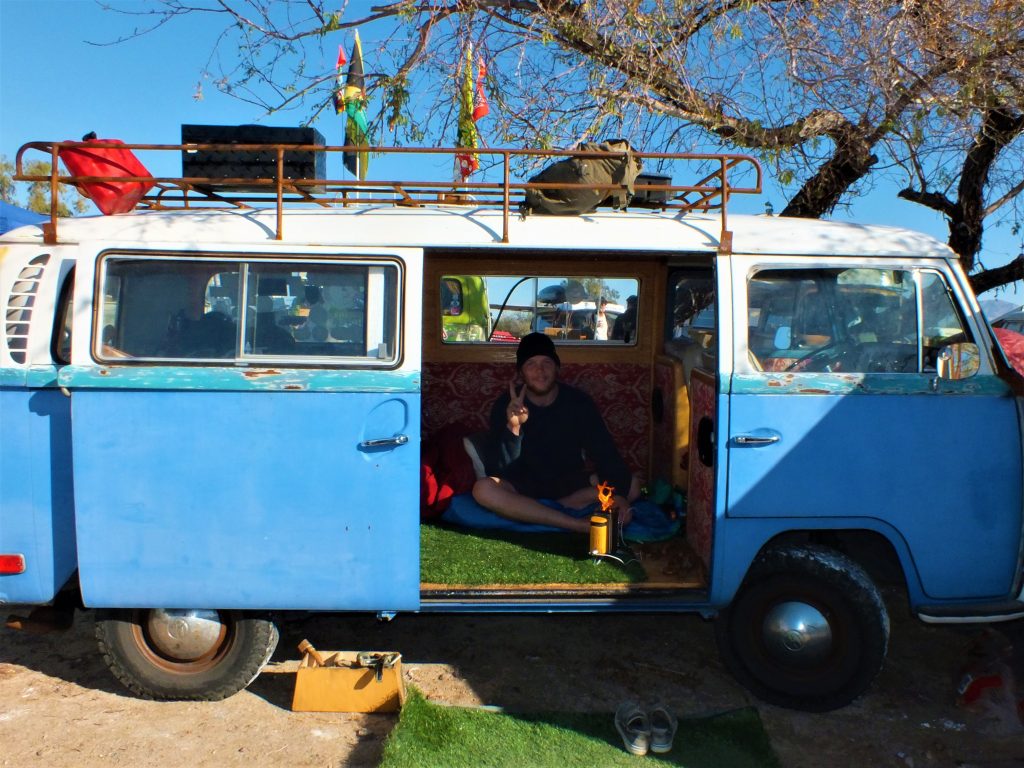 “I think my favorite trip was going to Wyoming this past year to see the eclipse,” Hoffman said.

He credits all of his knowledge to the bus bible, “How to keep your Volkswagen alive.”

“I bet every van in this park has that book,” says Hoffman, “I recommend it to anyone with a VW.” 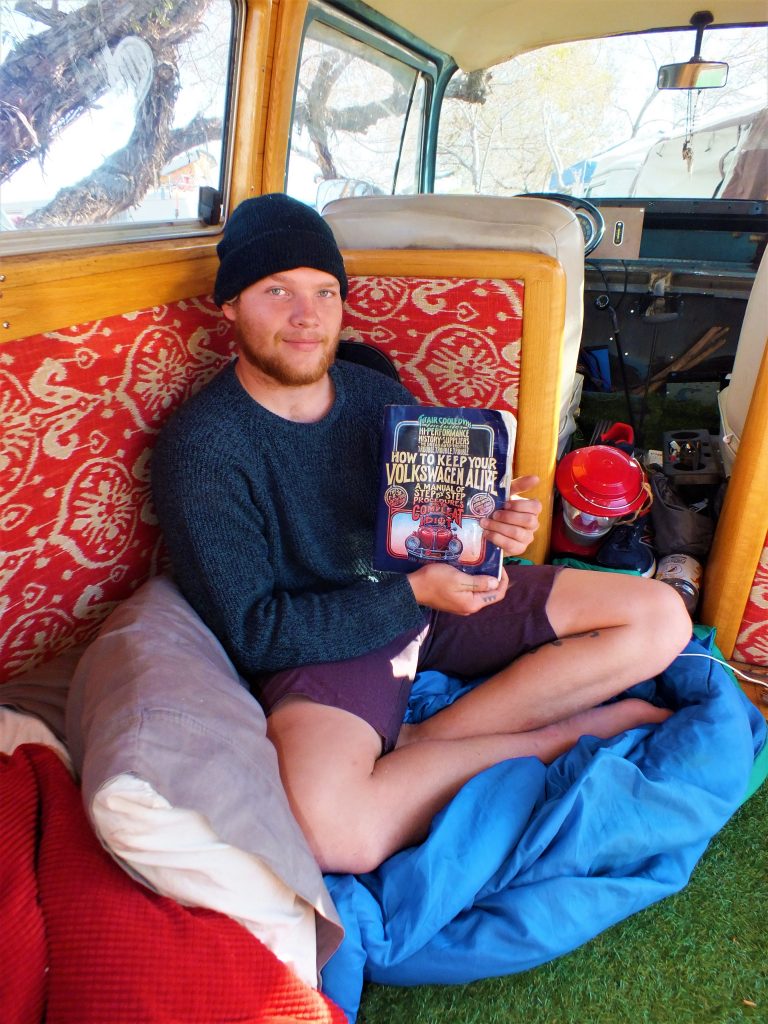 Hoffman becomes introspective when asked what he loves most about being a VW owner. “Patience…” he replied. “I might not be a great person but I am a better person since owning my bus. You have to be patient and just continue on.”

Walking a different path is the Lyons/Williams family.  Their “Hope Bus” is a 1973 Transporter they found abandoned in Salt Lake City, Utah. 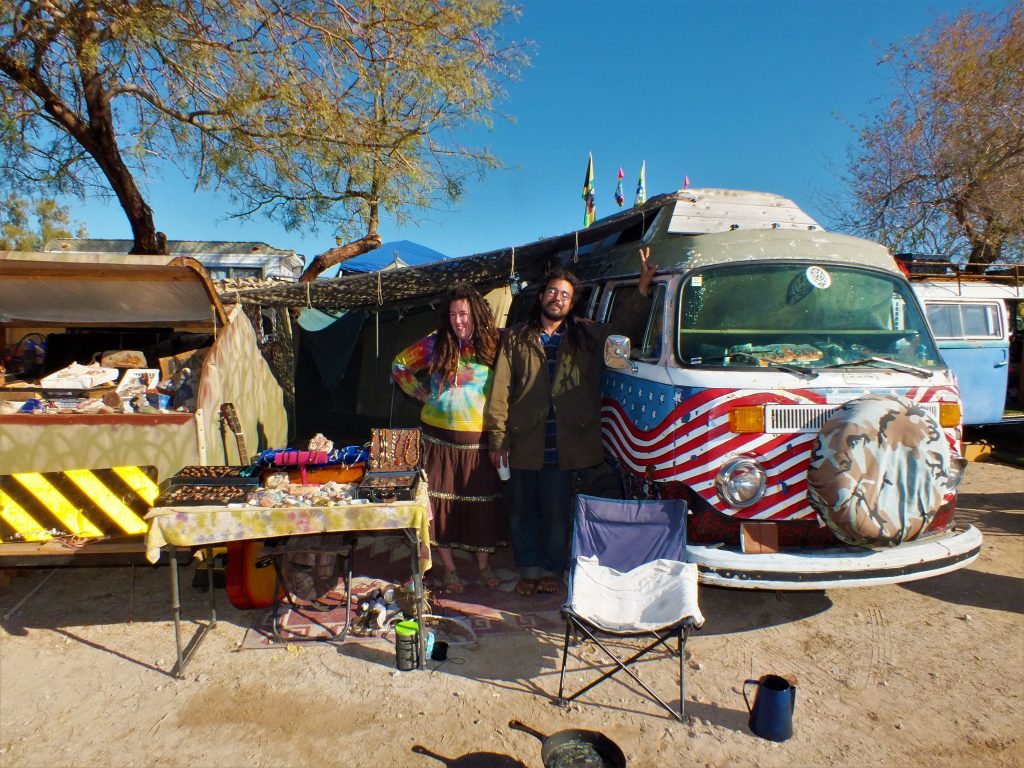 Using the handy-dandy bus bible, Christian Williams and his wife, Kitty Lyons, rebuilt the bus from scratch and have lived and breathed VW for the past 12 years. Hailing from Utah, the family travels all around the country selling their gemstone jewelry as the Blue Bus Boutique.

With a number of shared of adventures, they had to think about their favorite tale.

“It just becomes everyday life when you’re on the road,” Williams said. “But, the first hitchhiker we ever picked up painted this mural for us. He was an ex-convict with one eye. You never know who you’ll meet.” 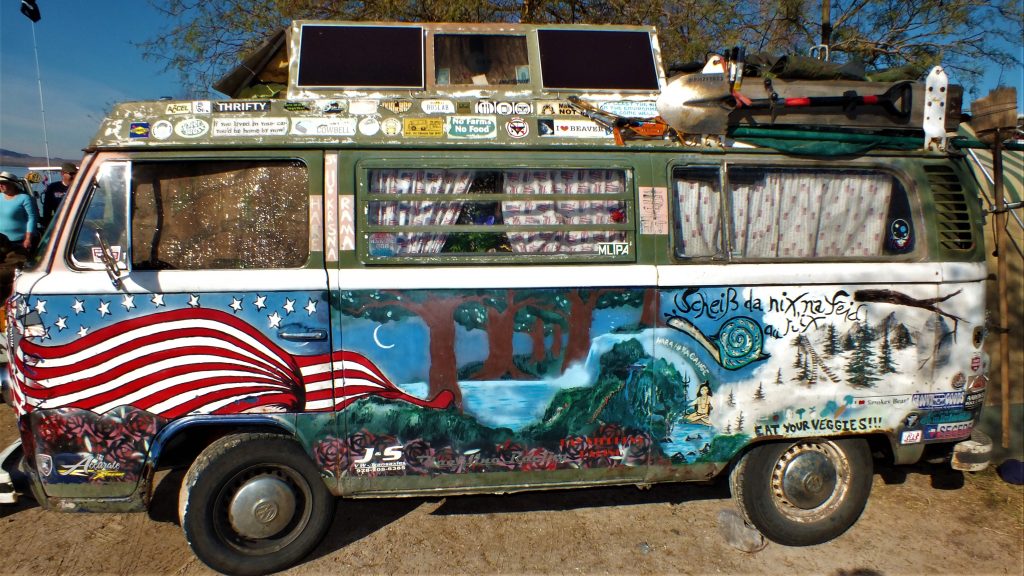 The mural of an artistic hitchhiker Grace Usher/ RiverScene

“Our favorite spot is a place in Big Sur, Calif. Had to save the bus from rolling off a cliff once,” the couple quipped.

No bus owner is ever the same,  like Mark and Nancy.

The couple met in 1973 at a concert as teenagers and have been together ever since. They bought “The Genie Bottle” 20 years ago when it was being auctioned for scrap metal for a miniscule $113. 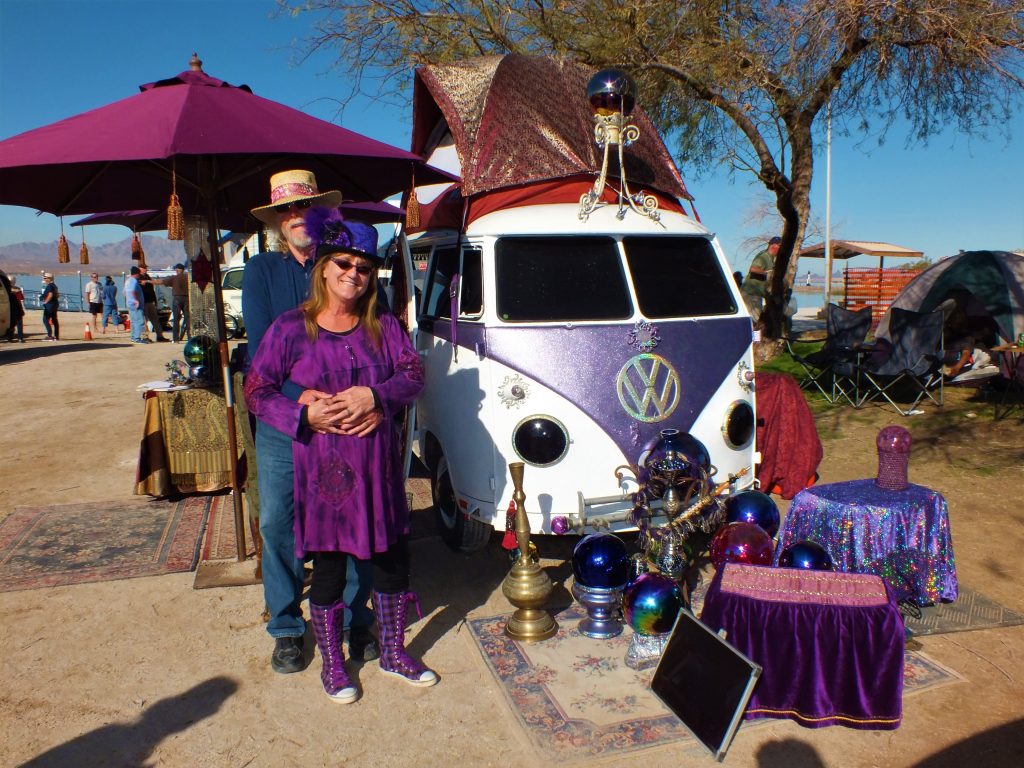 Back home in Albuquerque, N.M., the couple renovated the empty shell of the 1961 Westfalia split with subhatch into a motorless, towable travel trailer.

Nancy, a lover of purple, paisley and vintage began to decorate the trailer into a genie-like paradise. This marks the couple’s 17th B.B.B and the anniversary of when the trailer was named by a spectator at their first B.B.B. The trailer is equipped with hidden storage, carpet walls, dangling jewels, crystal balls and even a stationary water-bed.

The white exterior was hand-painted by Mark with house paint and was given a textured effect. The belt of the van is a special purple sparkle mixture created by Nancy with the use of 700 bottles of nail polish. 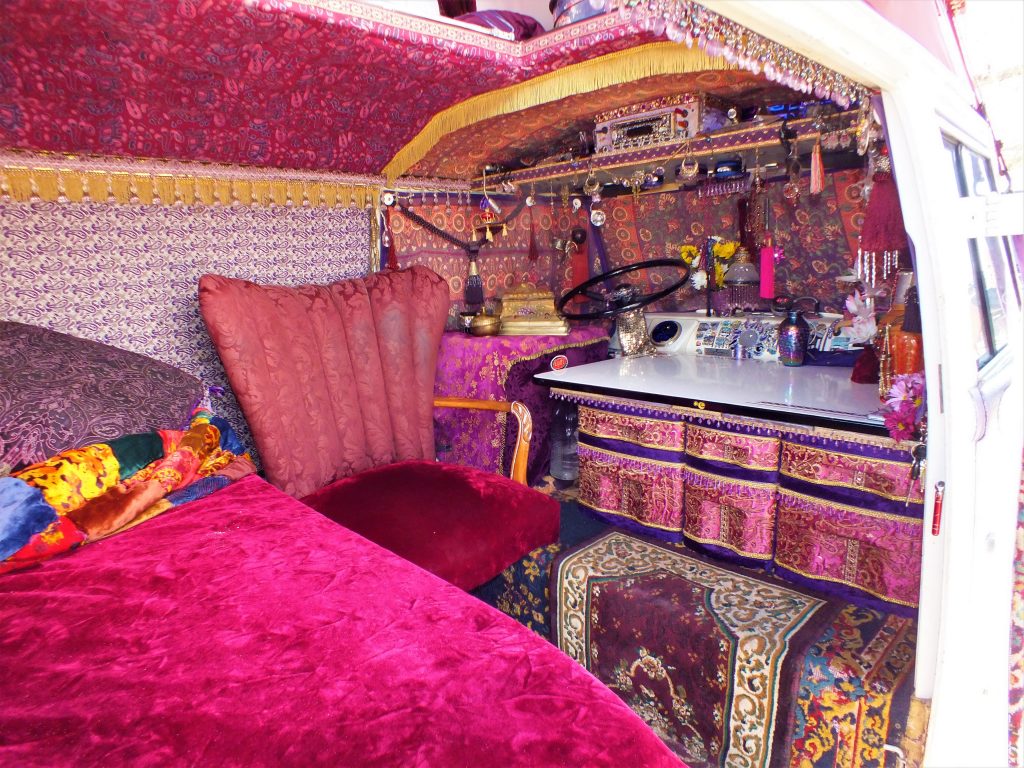 The colorful interior of The Genie Bottle. Grace Usher/ RiverScene

“I had to feel the art so I literally dipped my hand in the paint and painted the belt that way.” shared Nancy.

Mark, Nancy and The Genie Bottle have been featured on numerous websites, CBS Sunday in Madrid, New Mexico, and are being published in a German book, “Bulli Mania: Extraordinary VW Conversions.”

Not only do participants of the event show off their bus beauties and camp out for a weekend party, but some even bring their talents and hobbies to showcase for the weekend. Another native Havasuvian, Mat Olsen, is taking his love for BMX racing and mixing it with the cult culture of Volkswagen to debut a manmade halfpipe atop two Volkswagen vehicles. 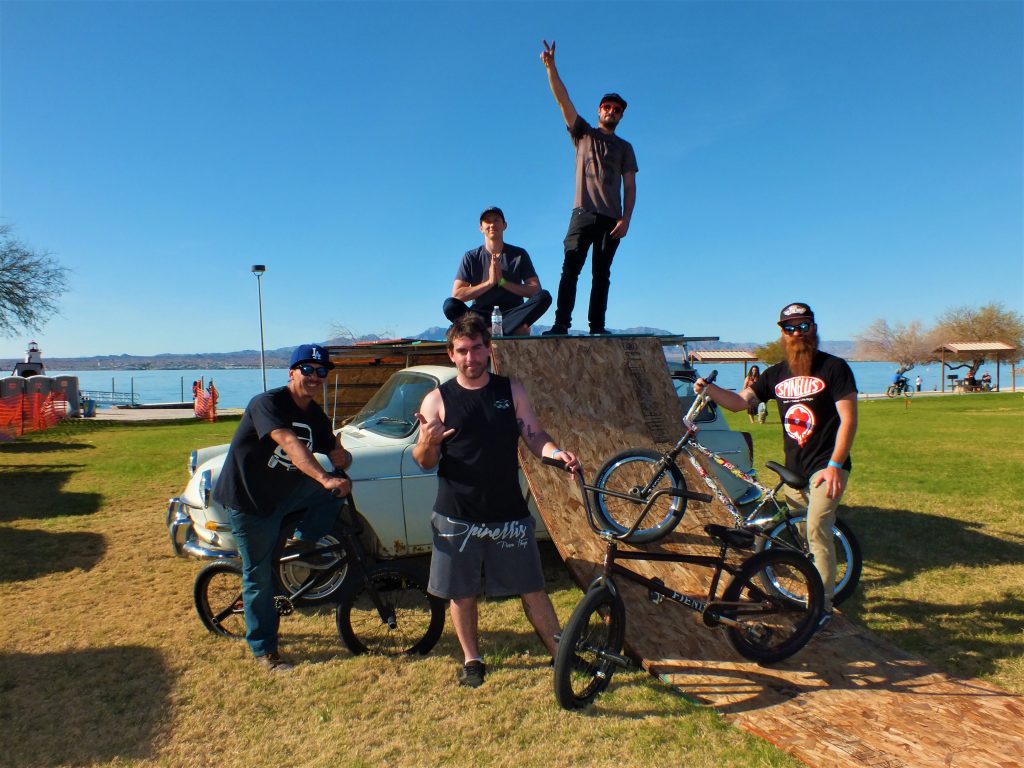 Olsen and his company, DecoBMX, come from just around the bend in Henderson, Nev. This is not their first time to Buses by the Bridge; however. During past appearances, they promoted youth awareness in relation to BMX sports and transported groups of kids from Windsor 4 to the Pat Tinnell Skatepark. There, the group would demonstrate ride styles and tricks.

This year, the group has made a half-pipe atop two Volkswagen vehicles. Olsen and crew are preparing for a BMX performance on Saturday at 11 a.m. 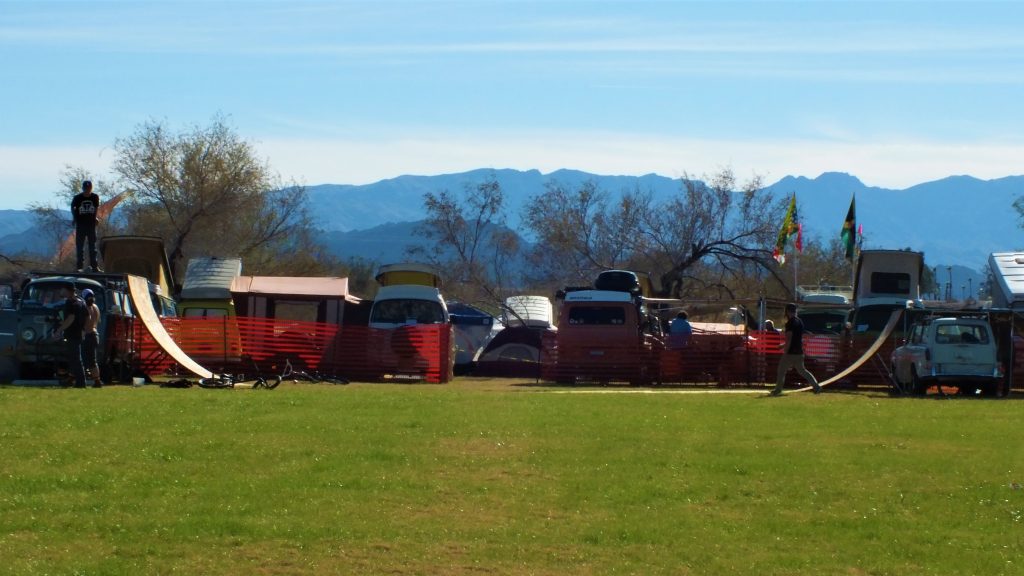 The halfpipe by Mat Olsen and crew. Grace Usher/ RiveScene

“I have done BMX my whole life and traveled in my VW for years. It just made sense,” Olsen said. “It took eight to nine hours to build this ramp in particular.”

Buses by the Bridge is simply a microcosm of the counterculture that thrives within the Volkswagen community. The entry for the event is a $2 and gates are open Saturday through Sunday, from 10 a.m. to 3 p.m. 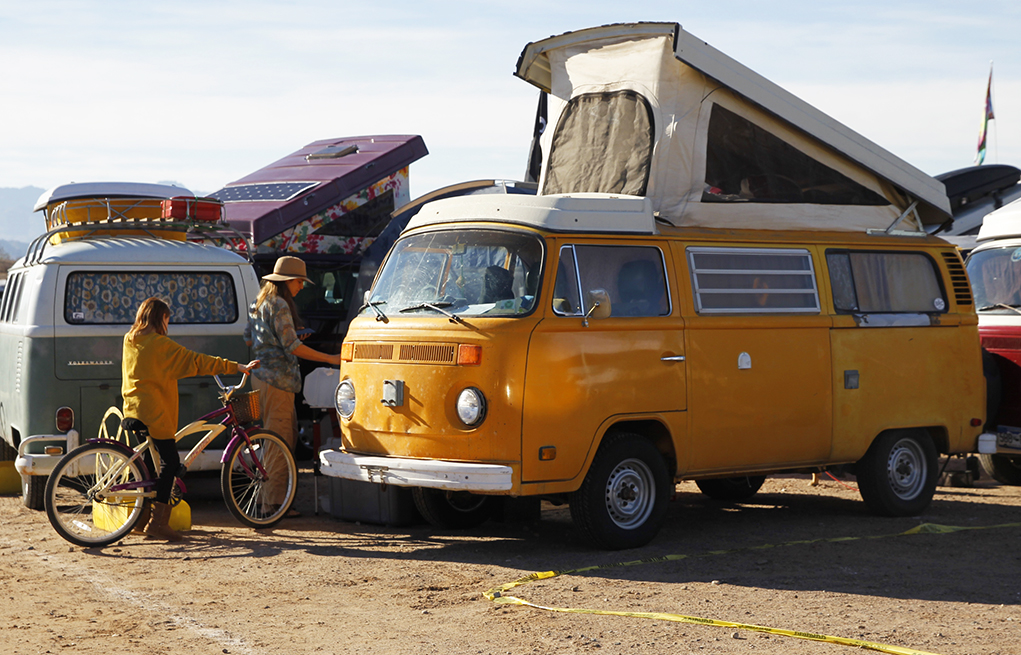 Participants are camped out at Buses By The Bridge Friday. Jillian Danielson/RiverScene 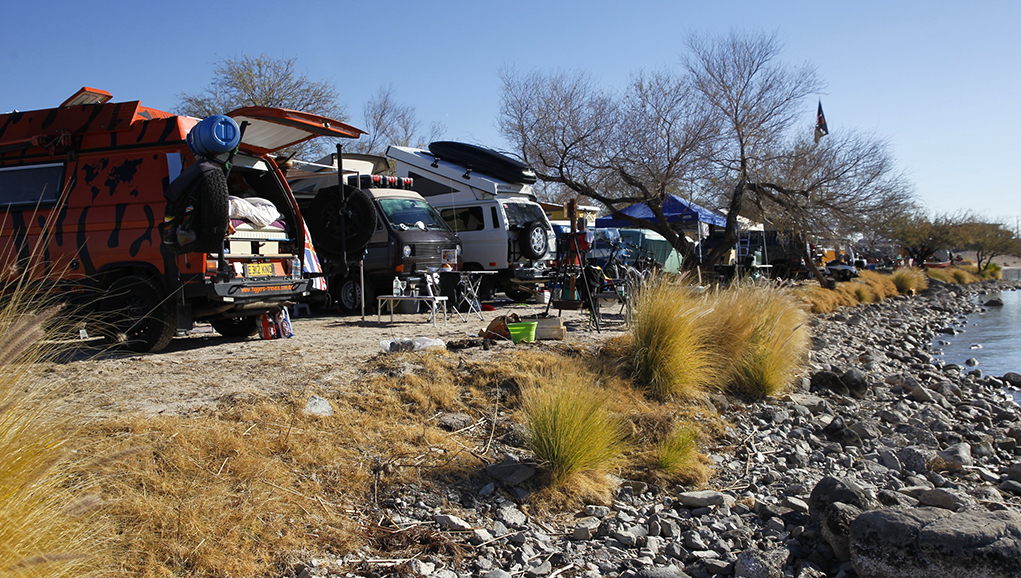 Participants are camped out at Buses By The Bridge along the Bridgewater Channel Friday. Jillian Danielson/RiverScene 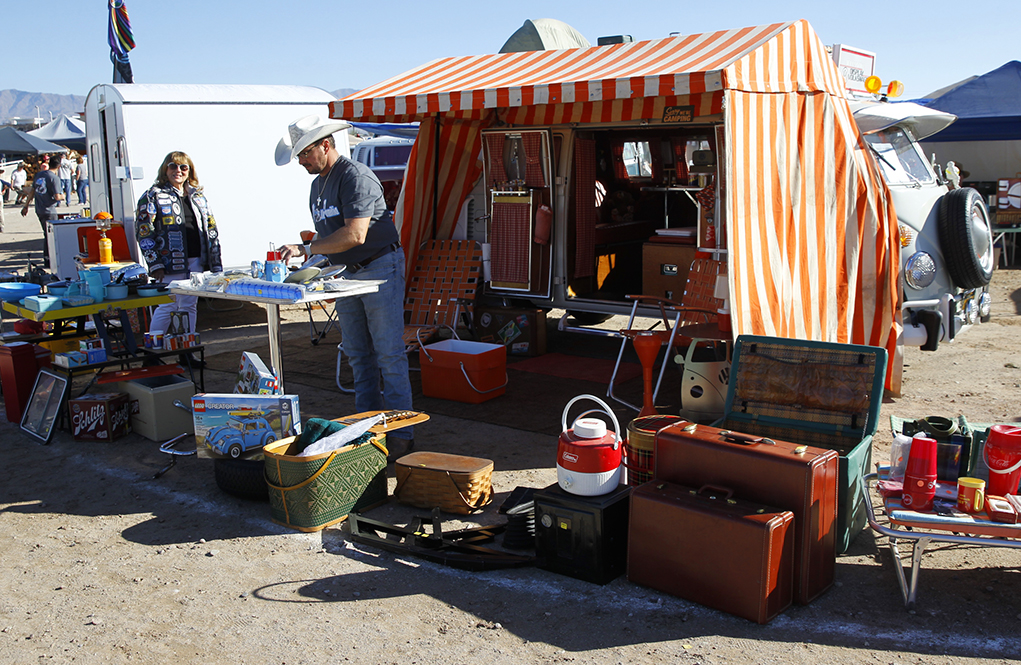 Vendors are set up at Buses By The Bridge throughout the weekend. Jillian Danielson/RiverScene

3 Responses to “Buses By The Bridge: Who’s Driving That Darn Van?”