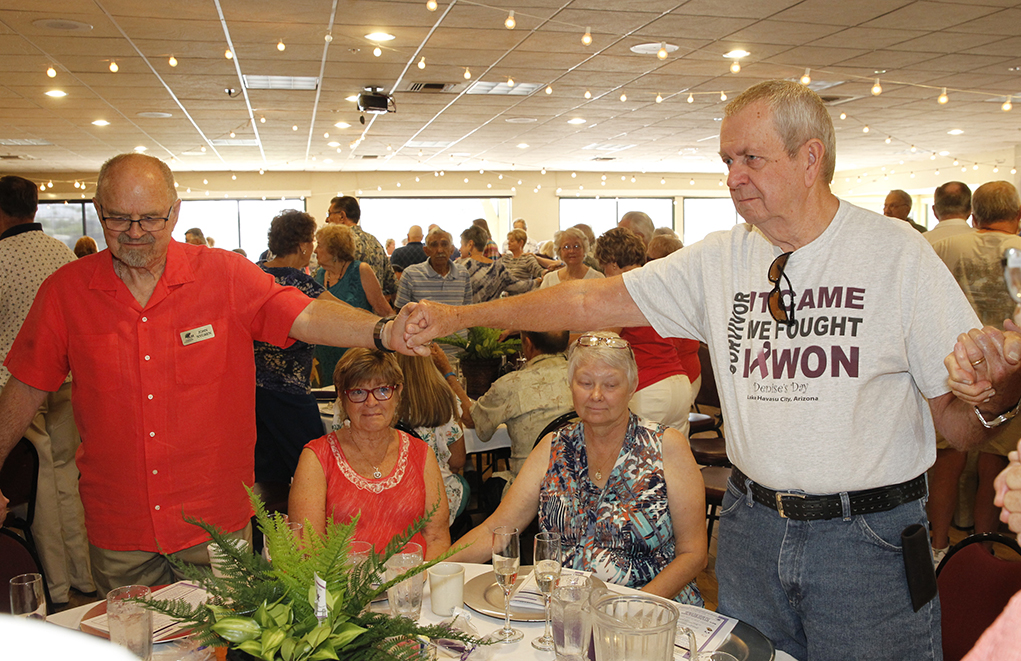 The Cancer Association of Havasu hosted its annual Cancer Survivors Day Saturday morning where survivors and their loved ones came together to celebrate each other’s journeys and successes. About 200 gathered in Shugrue’s Bridgeview room for brunch. 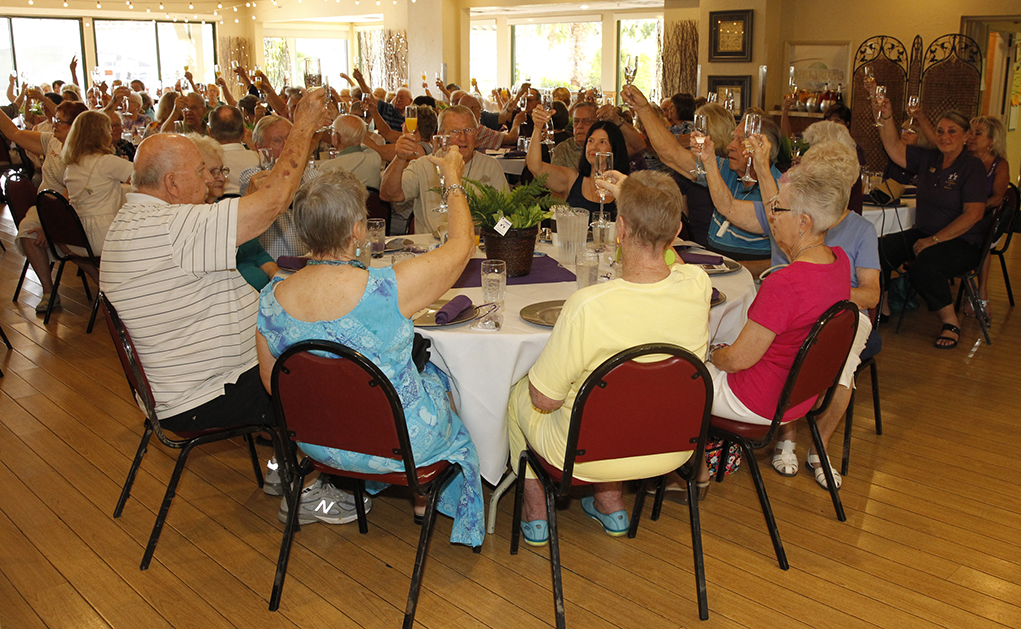 Survivors and their supporters do a toast during the ceremony Saturday morning. Jillian Danielson/RiverScene

The Celebration of Life began with introductions from Evie Cistaro and Margie Synder, Co-Chairs of the Cancer Association of Havasu, followed by a welcome toast to attendees. Jason Fallis, a drama teacher at Lake Havasu High School, then performed an inspirational song to the group about overcoming life’s many challenges. Mayor Mark Nexsen officially proclaimed June 3 as Cancer Survivors Day in Lake Havasu City. 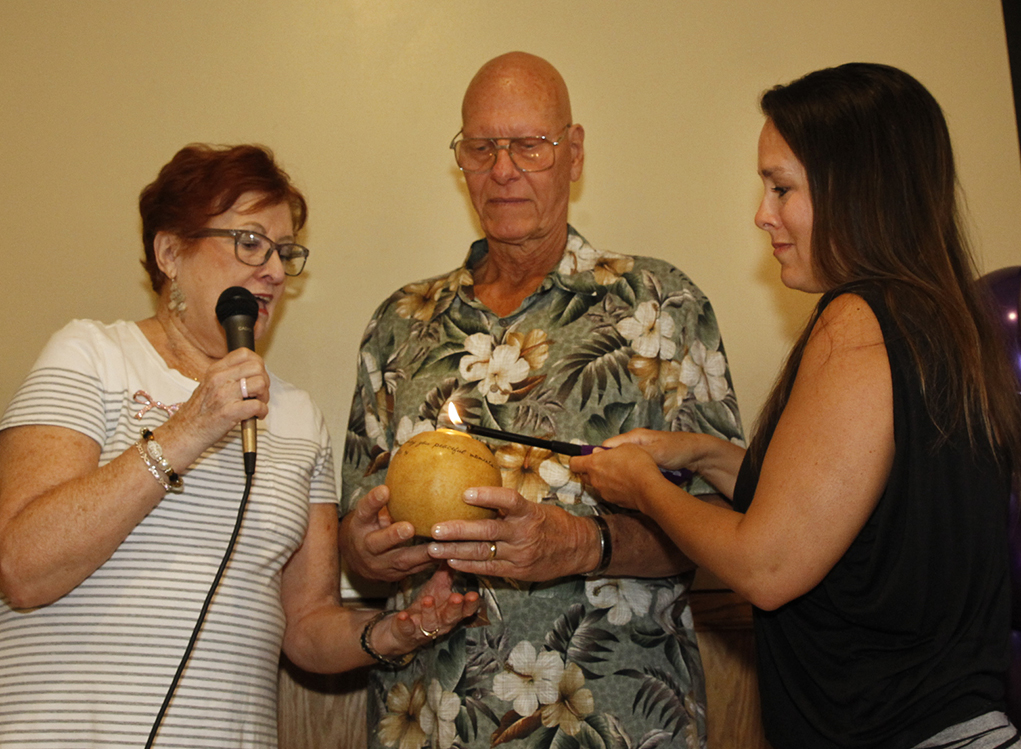 Jim Williams leads the local Men’s Support Group and is a prostate cancer survivor. Jim was diagnosed about eight years ago and has been cancer free for about six years. He said he found relief in animals and his work as a florist at Lady Di’s. Jim finds growing things to be very therapeutic. “I love taking seeds and watching them grow,” he said.

“When facing cancer, you must keep your spirits up — and let your doctor know what you’re feeling, they’ll help,” Williams said.

Elisa Toy, an 18-year-old recent Lake Havasu High School graduate, was in attendance Saturday morning. Elisa was diagnosed with Ewing’s Sarcoma, a rare bone disease, in 2007. She explained how one of the most challenging parts of her journey with cancer was keeping up with her schoolwork while undergoing treatment every other week. She described chemotherapy as “brutal and draining.”

“For anyone my age facing cancer, know that your family is there to be supportive — don’t be afraid to talk to them.” 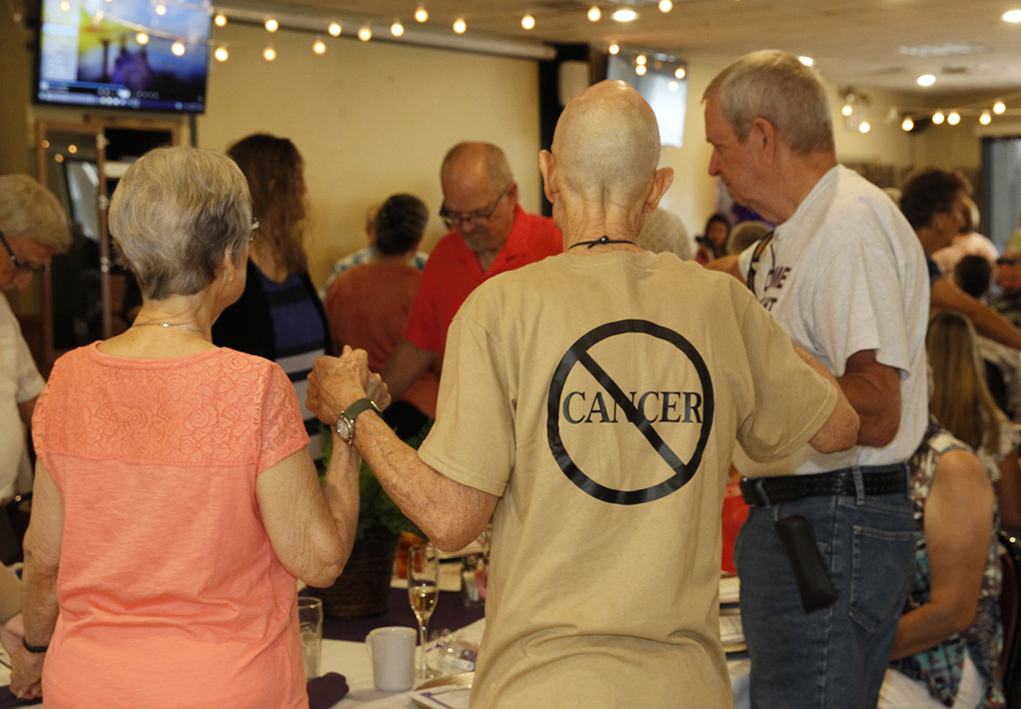 The Cancer Survivor Candle Ceremony was part of the Celebration of Life event. Everyone in the room who has successfully won their battle against cancer stood and held hands to form a circle, experiencing a bond that only cancer survivors can share. Arlene Polster, of Bosom Buddies of Havasu, Amie Morris, of General Cancer Support Group, and Williams, of Men’s Cancer Support, spoke words of encouragement during the Survivor’s Candle Ceremony. 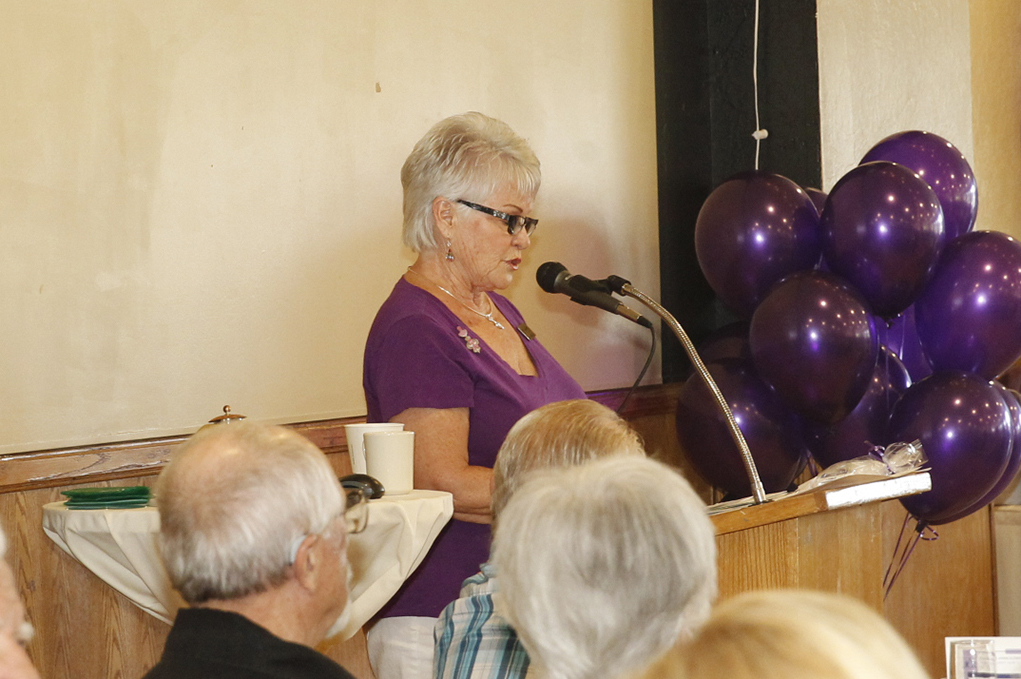 Carol Ferrell speaks to the survivors and their supporters Saturday morning. Jillian Danielson/RiverScene

Carol Ferrell, the Director of the Cancer Association of Havasu, then spoke to the group and introduced the new director, Jolene Jenson. The event wrapped up with survivor recognition gifts, the Lena Angel Award presentation, and centerpiece giveaways.

For more information on the Cancer Association of Havasu and support groups, visit: 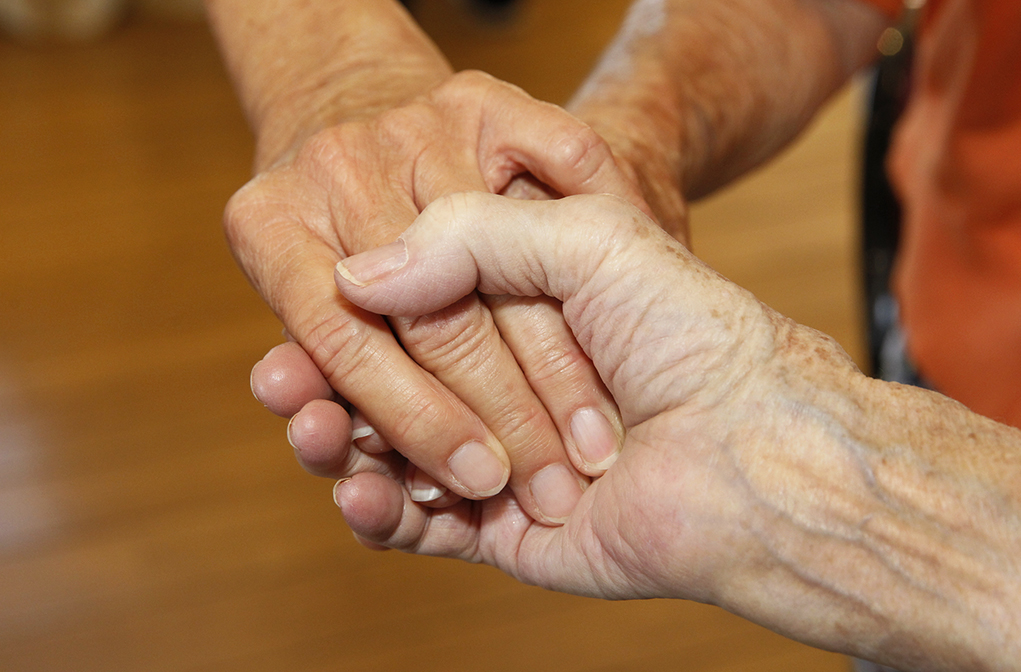 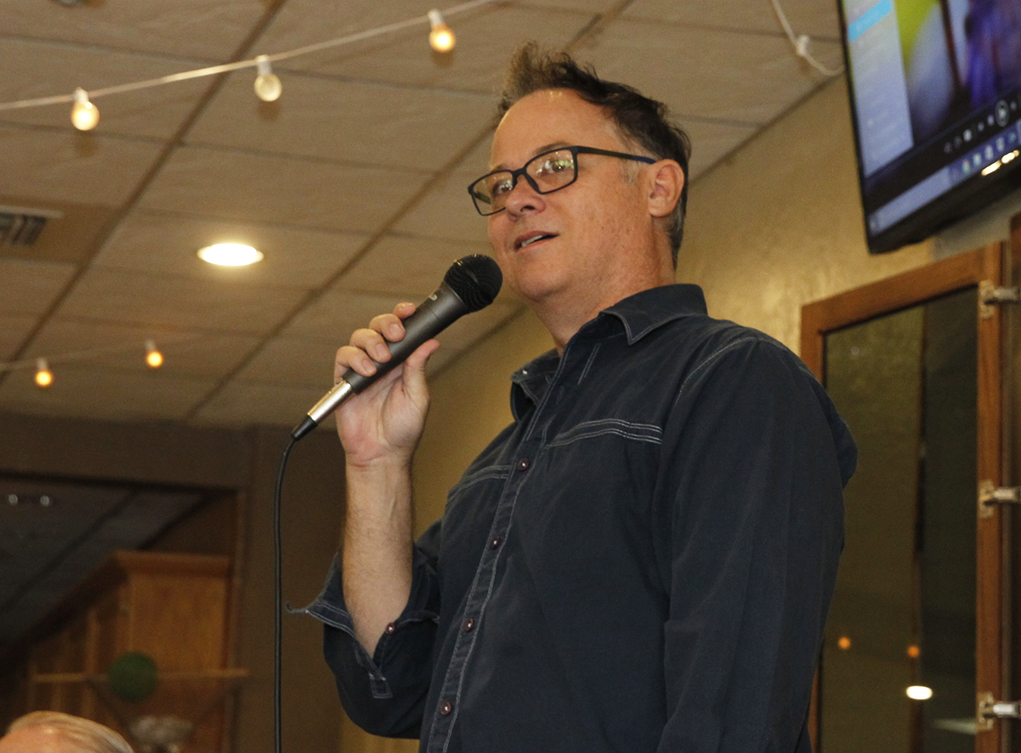 Jason Fallis sings for the survivors and their supporters Saturday morning. Jillian Danielson/RiverScene 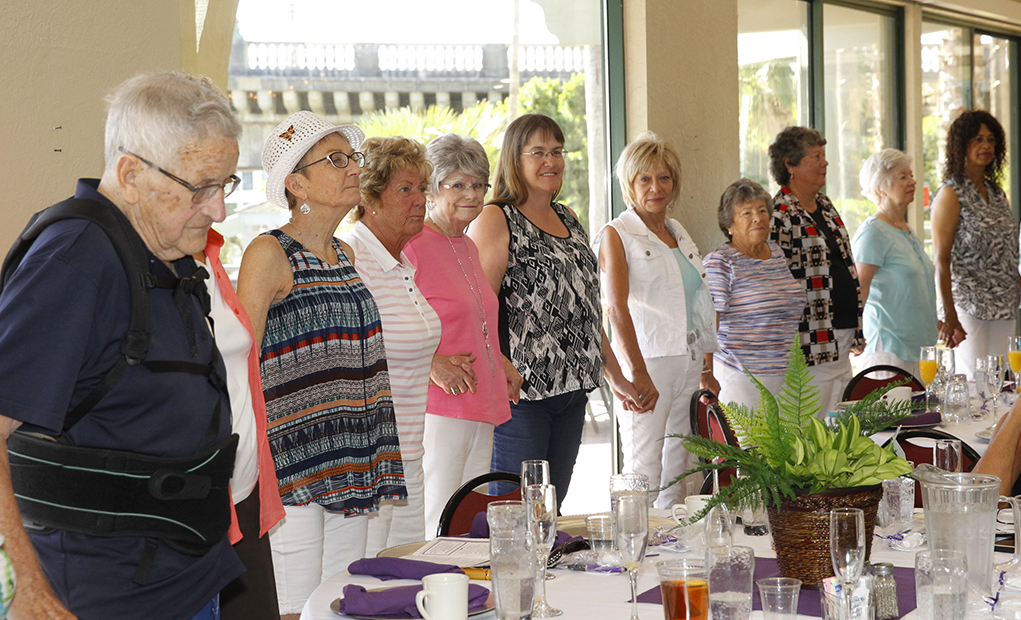