Chief Mueller: Time To Hand Over The Reins 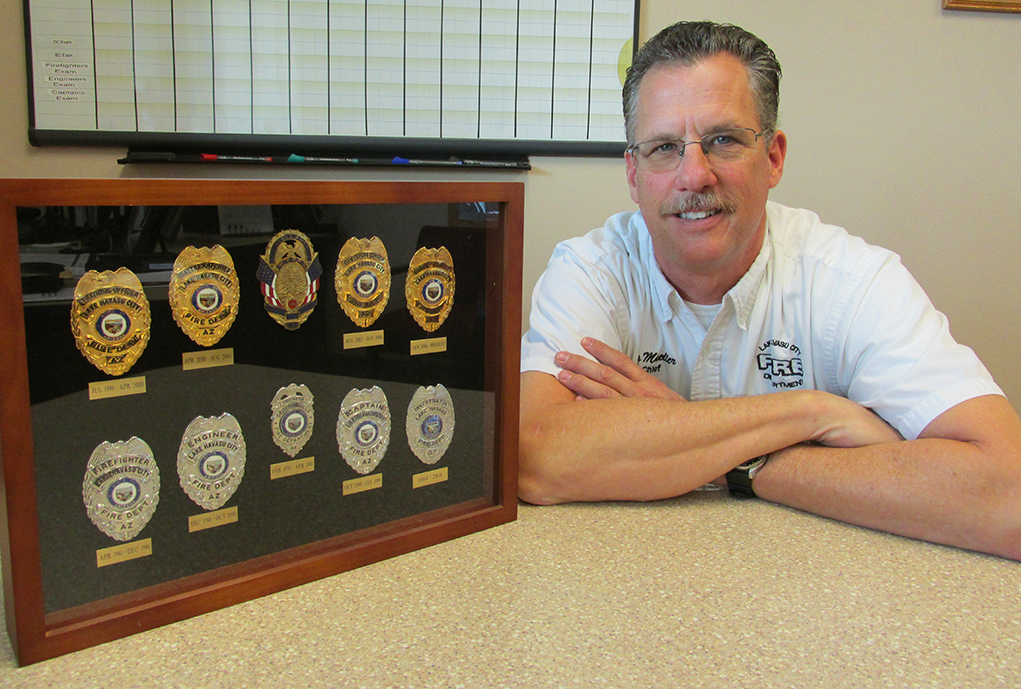 Lake Havasu City Fire Chief Dennis Mueller has officially filed paperwork with the city announcing his retirement May 6, a measure that leads to the conclusion of a 35-year firefighting career.

The bittersweet milestone has the 10-year fire chief counting his final 11 weeks by way of marbles in a jar near his desk, and reflecting on all that has come to pass thus far in his life.

“I’ve lived half my life here doing this,” Mueller said. “It’s been an interesting ride, I’ll tell you that.” 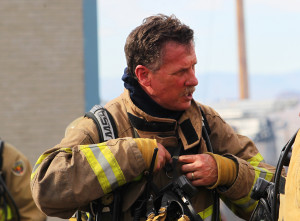 Dennis Mueller takes off his gear during his last live burn of his firefighting career. Jillian Danielson/RiverScene

Mueller, 56, started his career as a volunteer firefighter in neighboring Desert Hills Fire Department in February 1979. In the fall of 1980, he began as a paid-on-call firefighter with Havasu, going full-time in April 1981.

In December 1986, Mueller was promoted to Engineer. He moved up in rank again in October 1990 to Captain. These were the best years, he said, because those positions allowed him the opportunity to mentor other firefighters.

“Through the ranks, I tried to take whatever I had learned and pass it on to others,” Mueller said.

A short stint as the city’s Battalion Chief/Training Coordinator from October 1999 to April 2000 rolled him over into the position of shift Battalion Chief, which he worked until August 2005. At that time, he was promoted to Operations/Division Chief until January 2006. From then on, Mueller has served as the city’s fire chief. It is those last 10 years have been the most challenging and the most rewarding.

“You get to make a difference,” Mueller said. “And, hopefully, I’ve made a positive difference.”

The one thing Mueller said he learned about himself throughout his career was how fortunate he is in his life with his family, his educational accomplishments, and his career. He was reminded time and time again as he looked into the faces of those in emergency.

“I would see others in their life and during their emergencies and I always was so thankful for all that I had,” he said.

The job brings firefighters to the tragedy, panic, hardship and difficulty of other’s every day.

“When you get a job as a firefighter, it’s more of a calling to be service-minded,” Mueller said. “The job is to serve. What I’ve loved the most is that I got to serve and help others with their problems.”

Another lesson learned was people are varied, by nature, and compassion absolutely is necessary.

“You can’t be judgmental and you have to be adaptable,” Mueller said. “Too many people forget that.”

In the end, Mueller’s reflections on raising his two girls, being married, holding down an architecture job alongside firefighting for 26 years, completing his Bachelor’s and earning other credentials was a moment of accomplishment for him as he sat quietly nodding over the magnitude of the feat. 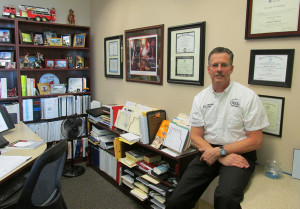 Lake Havasu City Fire Chief Dennis Mueller poses for a photo in his work space including his framed diplomas, credentials and other personal effects. Jayne Hanson/RiverScene

Knowing that he did all while moving through the fire department’s ranks, and finally leading them through a decade of ups and downs amid a ransacking recession is rewarding.

“Those were challenges that I put upon myself,” Mueller said. “I think it’s a pretty cool accomplishment.”

Retirement plans include selling his Havasu home and trying for a life in Henderson, Nev., to be near family, including two grandbabies. Outside of that, possibilities rest on new-home construction, architectural drawing and substitute teaching.

Mueller submitted his resignation to city officials on Feb. 9. His last day as fire chief is set for May 6.

That night, a retirement/roast celebration dinner follows. Tickets will be available early April for anyone wishing to attend. Tickets distribution locations are to be announced.

Feature Photo:  Lake Havasu City Fire Chief Dennis Mueller poses for a photo with his collection of firefighting badges that he has earned while climbing the ranks of the fire department. Jayne Hanson/RiverScene