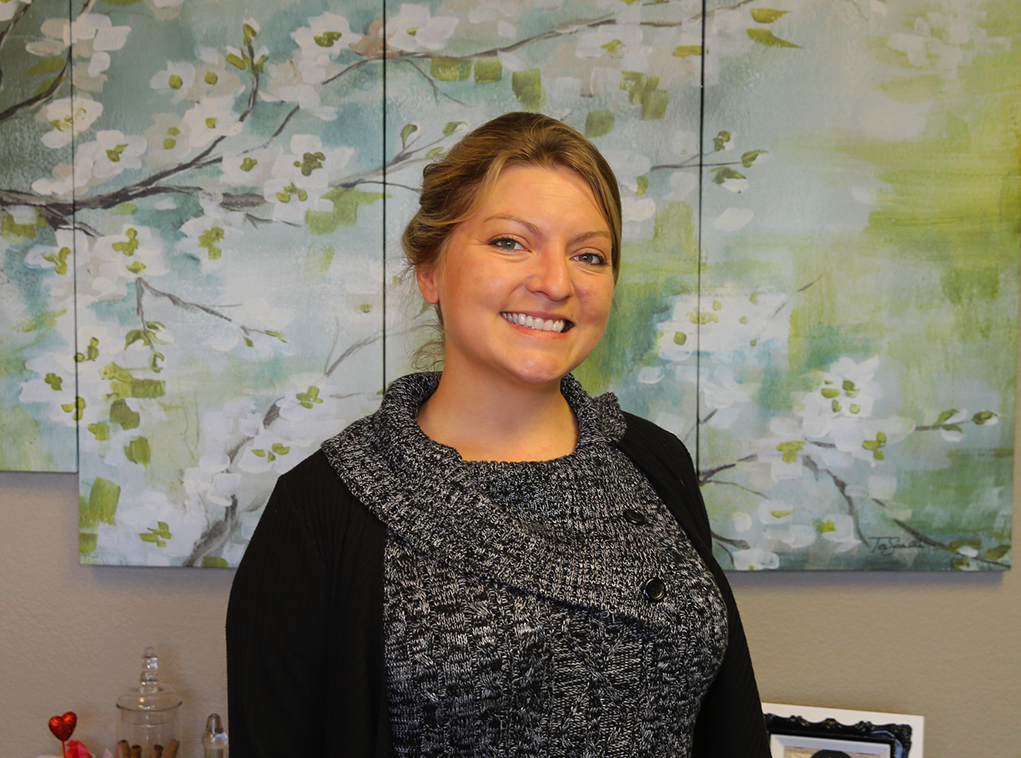 Niki Nickle has had a non-traditional life path; one that many would only dream to have experienced. Of all of her adventures, she has barely broken the layer of life. Nickle, just 30, has been a part of multiple industries.

Many in town know Nickle for her altruistic community involvement. She is the Investment and Special Event Manager for the Lake Havasu Area Chamber of Commerce. With the Chamber, Nickle assists members to insure their needs for their business are being met through networking and advocacy resources.

Though she is a familiar face in Lake Havasu, many do not know that Nickle has had a pretty unique life outside of town.

Born in California, Nickle moved to Lake Havasu as a toddler. She grew up in Lake Havasu and eventually graduated from Lake Havasu High School as the Class of 2007. Post-graduation, she had dreams to be in film.

“What started it was being on stage in the winter performance. I sang a solo and saw a father [swaying with] his daughter to the song I was singing. I was like, ‘I did that! I made that moment happen. I was able to enact such a beautiful moment from somebody. That was a catalyst.”

Graduating with honors and saving money working through her school years, she convinced her family to let her pursue her theatrical dreams. Ready to take on the world, Nickle headed to the “Big Apple” to study film at the New York Conservatory of Dramatic Arts.

During her film studies, Nickle worked as a veterinary technician. Little did she know, this would later open doors to new adventures.

N.Y.C. gave Nickle the groundwork to begin a promising career in film. When the infamous crash of 2008 affected her area, she decided it was time for a fresh start on the West Coast.

She packed up and moved to Los Angeles. There, she found herself connecting with the right individuals that led her to a place she had not considered ever being in her career: Stunt work. 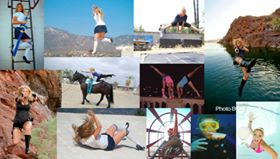 The stunt lifestyle is not easy. Potential stunt individuals must be personally invited to training sessions in order to prove their “worthiness” to the stunt community. Hard work, proper training and networking are the keys to establishing a fruitful stunt career.

“You can’t just walk in and say you are going to be a stunt person. They only will let you if you train under them. Safety is very, very, very important. They have to know how resilient you are. I was known as a ‘ground-pounder’-meaning someone who can take a really hard hit.” 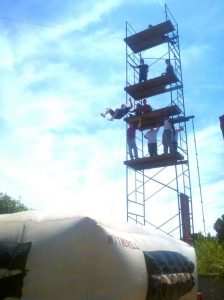 She began her stunt career on the very popular “Heroes.” On the show, she was a stunt double for Hayden Pantierre as well as performing other basic stunt roles.

Though her work was centralized in the Los Angeles area, she did return back home to perform stunts on Havasu-based film, “Piranha 3-D.” For nearly three months, Nickle was contracted to do high-fall, water-fall, and swimming stunts. 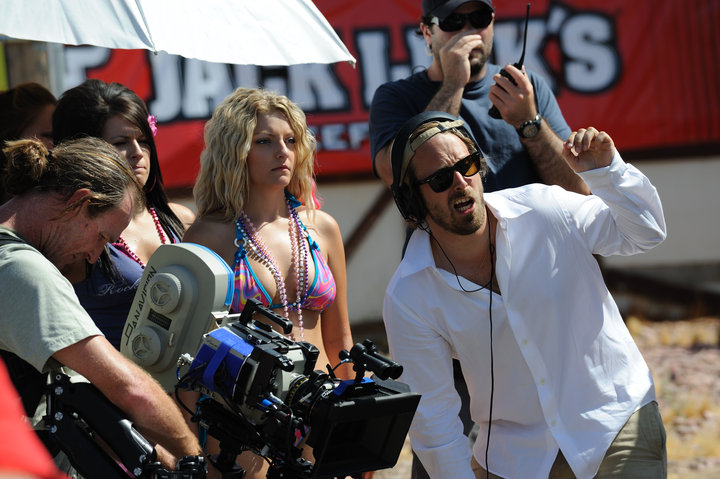 Nickle working along side the director of Pirahna 3-D. photo courtesy Niki Nickle

In “Piranha 3-D,” Nickle can be found in key scenes including the climatic stage crumble. On the left side, find her hanging from the falling stage. Toward the end of the film, lead actress, Elizabeth Shue, swims toward the sheriff’s boat while being chased by piranha. That swimmer is actually Nickle. The death scene on the boat is Nickle as well.

Nickle’s only notable speaking role was on the lifestyle show, “Great American MotorHomes” in which she guides the audience on a tour of Brad Pitt’s million dollar motorhome.

Stunt work is not acknowledged with awards through the Screen Actor’s Guild or the Academy Awards, however, there are the Taurus Awards, an international stunt work award presentation. Nickle was able to attend these incredible ceremonies hosted at Paramount Studios. 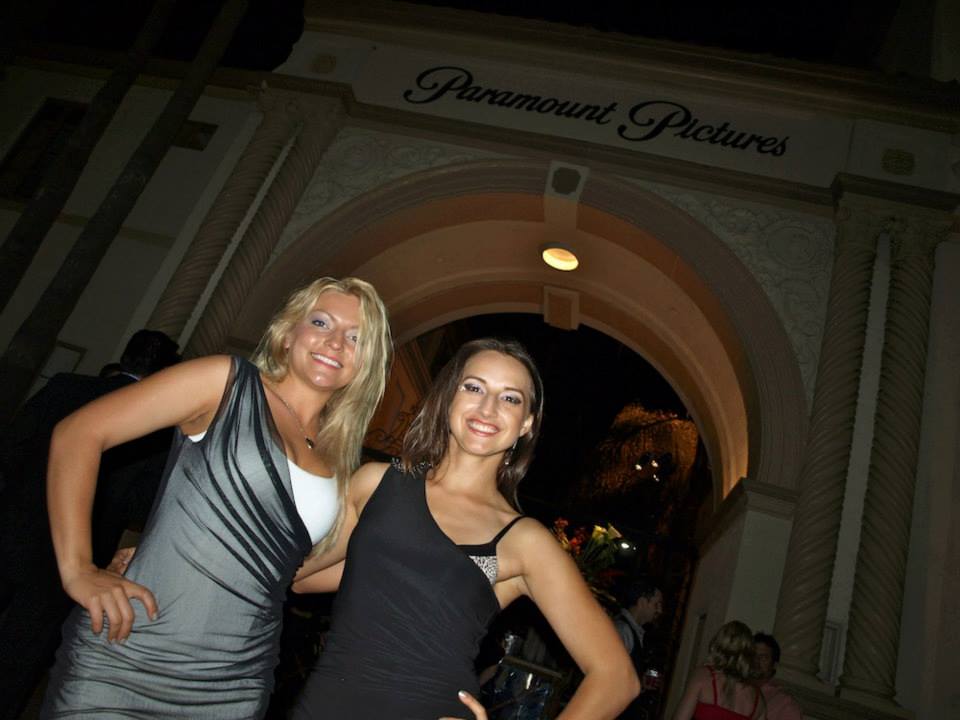 Nickle and a friend at the Taurus awards. photo courtesy Niki Nickle

Along with her career in the film industry, Nickle stumbled upon a strange opportunity that would utilize her experience as a veterinary technician during her college years.

A friend desperately called Nickle for advice on a “unique” animal. Unsure of her ability to help but willing to tend to her friend’s desperate need, she traveled to help with what she was told was a cat.

Upon arriving, she found it to be a very large cat. A yellow tiger, in fact. Luckily, the wildcat had a very typical paw injury found in many standard house cats as well. For her assistance, Nickle can visit the Tiger Sanctuary on a regular basis. 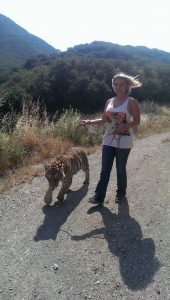 After her on-screen production roles, Nickle spent the next five years in a position that is very rare for women in her industry. She became the operations manager of King Kong Production fleet company. She managed the maintenance, mechanics, parts operations, technicians and drivers. She also was the main call when something went wrong on set.

Unfortunately, the stress of being the main person caused Nickle to suffer from a false heart-attack. She and her husband, Kevin, decided it was time to pack up their belongings and their dogs and leave the rat race.

Though they never thought they would (like many home-towners do) they decided to move back to Lake Havasu.

“I knew the best way to meet productive people in town was to join the Chamber.”

At a mixer, Nickle was told of an open position at the Chamber, so she went for it.

One can find Nickle assisting in the planning and execution of the city’s biggest events including Winterfest and Desert Bash. Likewise, she is a member of the committee that puts on Up With Women – a three-part series that promotes local female business owners.

Along with her duties working in the Chamber, she is in the current 2019 Leadership Lake Havasu cohort. This program is hosted by the Chamber in which participants learn of the different areas that comprise Lake Havasu economically, socially, and politically. Nickle is also a committee chair for the annual L.L.H. event in April, Cirque de Havasu.

Outside of the Chamber, Nickle volunteers her time with Sunrise Rotary. Until recently, she was also a board member for local nonprofit, Only Orchids. Nickle said she believes the best way to spend extra time is to give it back to the community.

“I wouldn’t say I have a defining proud moment. The biggest [accomplishment] is opening myself up in life to create the connections that got me to have all of the amazing experiences.”

To find Nickle in the credits, International Movie Database, and Screen Actor’s Guild, look for her “SAG” name Niki Staudt.

To view one of Nickle’s stunt reels, click here. 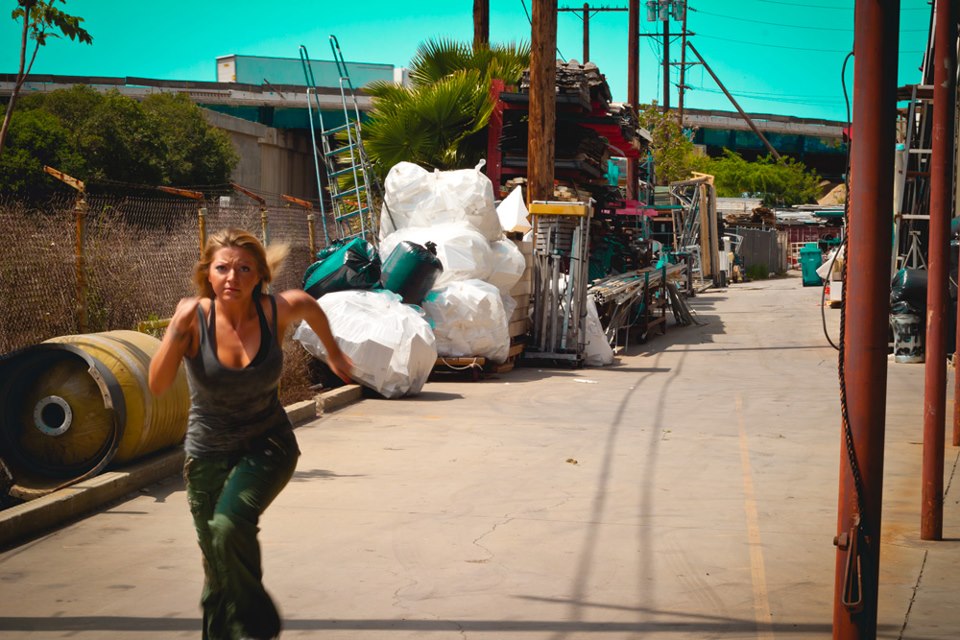