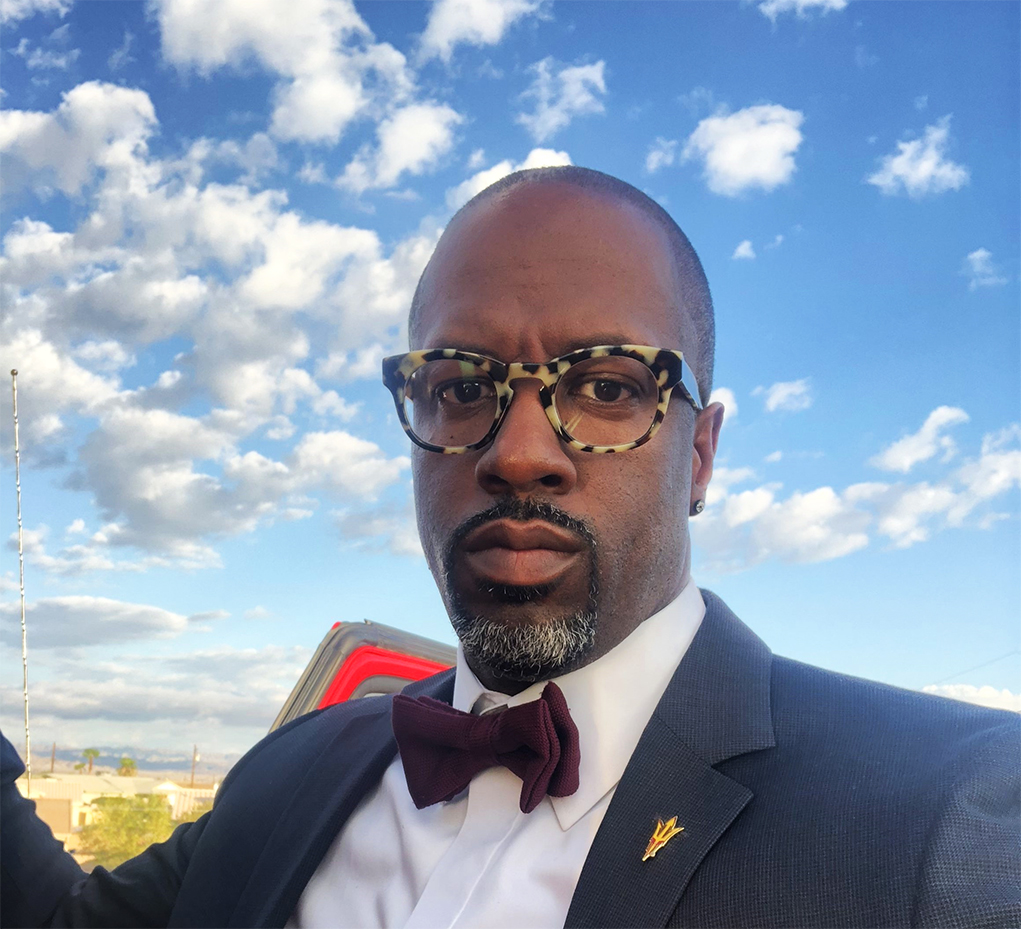 Dr. Danny Pirtle is a man of taste. The criminal justice professor sits down with Riverscene Magazine to give an look into his life and to what led him to become a professor at ASU Lake Havasu.

In his uniquely decorated office, filled with portraits of famed civil rights leaders, soul albums, this father and grandfather sat down with Riverscene and gave us some insight on his vast and fascinating life.

A Career in Criminal Justice

Originally from Nashville, Tenn., Dr. Pirtle entered the criminal justice system through personal experiences. His environment exposed him to the inner mechanisms of the system, and he realized he wanted to do better by working within it.

Pirtle started the road map of his future at his first job working as a counselor for a homeless shelter in Houston, Texas. Pirtle then progressed into being a detention officer for juveniles in Houston, as then on to become a teacher.

The professor’s first teaching position was in Philadelphia, Penn., at the Holy Family Catholic university for almost eight years. He enjoyed working with students there, and eventually sought a higher position in administration. However, while he did value his experience as an administrator for three and half years, he soon realized he preferred to work with students.

Dr. Pirtle moved to Lake Havasu City three years ago after accepting the position of the criminal justice program head professor. A social innovator, Dr. Pirtle wasted no time getting involved with the Havasu community once he arrived. Moreover, Pirtle has established new opportunities for youth and community members.

A League Of His Own

In order to attract more students to ASU Lake Havasu, the epoch of progress in Lake Havasu City, Dr. Pirtle set up a Criminal Justice Camp, which he says in his proudest achievement.

“Over 25 individuals from over 10 different agencies helped bring the camp together over the week we hold it.”

The Criminal Justice Camp at ASU Lake Havasu happens during the summer, and it brings interested students to the campus from various parts of the nation, including Nevada, California and Arizona. The purpose of the camp is for students to experience college life, and expose them to as much criminal justice as possible. The camp is also well supported by the community, offering several scholarships to students who wish to participate.

“Almost 90 percent of the students didn’t pay,” Dr. Pirtle told Riverscene. These contributions were largely because of the support from community members.

The opioid symposium’s initiative was to dispel the stereotypical addiction myths and inform the general public about the severity of the epidemic facing the country, and how to prevent further addictions. It was so successful at Mohave Community College, it took place two more times in Bullhead and Kingman, respectively.

“If you have a good idea, people will work with you.”

Dr. Pirtle also created the adult basketball league for Lake Havasu City and the adjourning areas. The league is already in its third season with teams from throughout the community participating. This year, there will be free admission for high school students to enter and compete.

Pirtle has focused extensively on engaging youth in community. In his short time here, he has already hosted school dances and Halloween parties for the kids. The professor also ran for a seat on the Lake Havasu Unified school board, and had an outpouring of support from Lake Havasu City community members.

Dr. Pirtle teaches at ASU Colleges at Lake Havasu City. He is quickly becoming a staple in the community, and a man of service for his students.