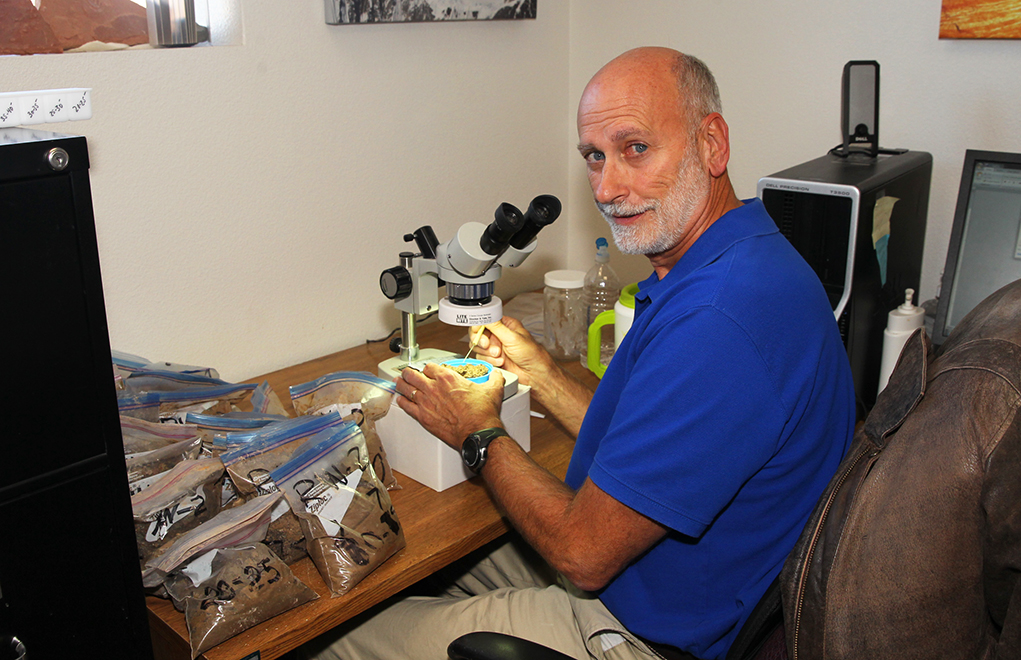 Doyle Wilson has spent the past 12 years monitoring, measuring, studying and analyzing Lake Havasu City’s water supply and citizen consumption while striving for pathways of sustainability and efficiency when it comes to the system’s overall spectrum.

“The number one thing is to make sure that we have water for the future,” said Doyle Wilson, Water Resources Coordinator for Lake Havasu City. “There isn’t much water in the area other than (Colorado) River, and, if we don’t have water from the River, our city would not exist.”

Wilson grew up in Houston, Texas, and is a Texas A&M graduate. He earned his master’s degree at Arizona State University and later earned his PhD at Portland State University. His doctorate degree is in environmental science and geology.

“I’ve always been interested in geology and fossils, dinosaurs, of course, when I was little, and anything that had to do with science,” Wilson said. “My continued education got me even more interested in it.”

The tasks of safeguarding Havasu’s water supply and keeping a close eye on the community’s consumption is something that is a continuous flow. In Wilson’s world, it’s called building the city’s water portfolio. 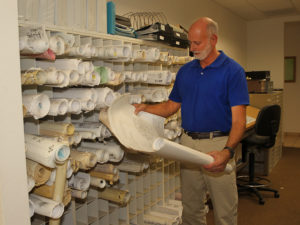 Wilson looks over one of the maps of Lake Havasu. Jillian Danielson/RiverScene

“To build a water portfolio, it’s a conglomeration of sources and deliveries of water,” Wilson said. “We are 100 percent dependent of the River but also reusing wastewater for irrigation purposes.”

When it comes to the community’s overall consumption of water, Havasu uses more per capita than the national average but it is because the region’s temperatures spike so significantly in summer.

“In the late 1970s, we were using over 400 gallons per day per person – that’s huge,” Wilson said. “You don’t see that anywhere today. We are at about 200 gallons per person today. It’s the entire consumption of the year divided by the population.”

Havasu’s transient population of summer and winter visitors is a challenge, but that doesn’t make us unique. Other cities in the U.S. contend with the influx, too, so it’s a good guesstimate, Wilson said.

“Water conservation is another huge part of the portfolio,” Wilson said. “We’ve been reducing water consumption since the late 1970s.”

There are two sides to water conservation including reduced use and ensuring the city’s water delivery system is efficient.

“How many water leaks do we have in the distribution system, in the wells, and water plants? Can the delivery and treatment process be more efficient?” Wilson asked while explaining some of the questions he contends with daily.

On the reduction side of consumption, it’s all about raising awareness. Switching out high-flow toilets to low-flow toilets, installing eco-efficient washing machines and dishwashers at both the residential and commercial level, and forgoing traditional landscaping for desert xeriscaping. All measures save water. For more information, visit www.havasuwatersavers.org.

Currently, the city recycles 50 percent of its wastewater for irrigation purposes when it comes to most of the local golf courses.

Reusing treated wastewater to irrigate grassy areas and trees at both Rotary Community Park and London Bridge Beach would put us within reach of that goal. As of now, the pipelines are in place and the project is pending some infrastructure improvements. For now, there is no set date that would begin that flow.

Eventually, the city has a plan to use recycled wastewater to irrigate Arizona State University, Jack Hardy Park, Cypress Ball Parks, and the main street area. Recycled wastewater also could irrigate the landscaping along the highway, the several local school grounds, and any remaining city parks.

Wilson’s work with the Mohave County Water Authority Board helps secure water for use in case of emergency.

“An acre-foot is a football field, goal-to-goal, covered with water that is one-foot deep,” Wilson said. “One acre-foot will supply two families of four for one year, on average.”

Havasu does have emergency water stored in the Phoenix area. There is 120,000 acre-feet available until 2096 that is contracted through Arizona Water Banking Authority.

“It’s a backup supply, it’s temporary,” Wilson said. “It’s not free. We’ve made a down payment to have water ‘firmed’, meaning it’s yours. It’s a complicated business.”

Wilson’s work space is stacked with individual zip-top sandwich bags filled with sediment that was extracted at the city’s North Regional Wastewater Treatment Plant, near the airport. Each bag is marked with the depth from which is came. 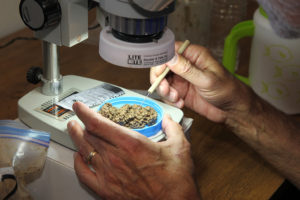 He uses a microscope to study the sediment. It’s size, shape, color, texture, and type. It helps determine water movement as it filters beneath the ground’s surface at the different levels. It is part of a pilot program that would essentially store recyclable wastewater during winter months, when it is in lower demand for irrigation, to use like an on-tap system in the summer months when demand for irrigation is at its height.

The study began in 2008 and centers on 3,500 acre-feet of wastewater currently stored underground. Testing water samples over the course of the next few weeks will determine if the system, and the well that supports it, is viable.

“The goal is to reuse as much as we can,” Wilson said.

If successful, the system could be duplicated at other well-sites in the city. There currently are three wastewater treatment stations in Havasu including the location at the airport, the Island and one on Mulberry Avenue.

There is an underground chromium plume associated with the old McCulloch manufacturing site, on Lake Havasu Avenue and Kiowa. There is concern about it reaching the Lake and having potential to pollute ground water wells in that area, Wilson said.

The site in question is under review at the federal level where grant funding could be secured to help clean up the locale.

“With water quality, there is a Vision 20/20 tie in,” Wilson said. “We have to take care of our water supply, and sustainability of our Lake, and the health of our Lake as part of our economy. We need to be concerned about what is going on.”

As earlier reported, water was identified as an imminent priority by 200 citizens who attended a local Town Hall in late 2015. Since, water conservation and Lake protection has become a top issue in the city’s Vision 20/20 plan. For more information, visit www.havasuvision2020.com.

When it comes to the Lake, there is very little study and a lot of issues going on. For example, quagga mussel invasion and unusual algae blooms.

Wilson currently works on analyzing data that will size up what storm runoff draws into the Lake and what we as a community are contributing into that environment with the runoff as a conduit.

“Up to this point, it’s not significant, it’s looking pretty good,” Wilson said. “There are no obvious red flags. There are minor concerns about nutrients, but that’s about it. Nutrients is important because of algae blooms, but I don’t want to jump to that conclusion. It’s not horrible what we’re taking to the Lake. Actually, I think we’re pretty lucky in that regard.”

It is evident in the study that Havasu’s natural terrain and vegetation have played a helpful role in acting as a filter for the runoff water before it enters the Lake, he said.

The report findings have been submitted to U.S. Bureau of Land Management for their review as Wilson continues to interpret the data and compile a report specific to Havasu. The data will be completed in the first quarter of 2017, he said.

THE FUTURE OF WATER

Another Vision 20/20 tie in is its Havasu 280 property that encompasses a proposed environmental education and research center.

The center would dovetail with a recent Colorado River Regional Sewer Coalition, or CRRSCo, grant in the amount of $80,000, that hinges on a watershed management plan that could encompass the lower Colorado River.

Wilson, who is involved with CRRSCo, said the watershed project is growing membership for the coalition as the focus shifts to what’s in store for the Colorado River. 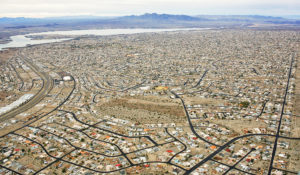 A few of Lake Havasu and the Colorado River from the sky. Jillian Danielson/RiverScene

“If we identified the layout of the land, the problems and the issues that are there, and in the future, ways to address them – it’s about water quality on the River,” Wilson said. “We could get something going on the River that never has been done before.”

Mapping the lake bottom is a research component currently within Wilson’s grasp.

“It’s a foundational-type study,” he said. “If we understand the geometry, or shape, of the Lake, we can come in with other studies like water flow and nutrient movement,” Wilson said. “We could model all of this stuff. They’re doing the same on Lake Mohave And Lake Mead right now.”

If the project comes to fruition for Lake Havasu, the study and model would be comprehensive of the Colorado River’s lake basins in this region. The measure could draw the interest of researches from all over the U.S.

The CRRSCo watershed management program, now in its infancy, is a two-year project. It could lead to a far-reaching management partnership that would place the best interests of the Colorado River on a pedestal.

“As long as that water is flowing, and we have a plan in place, the health of the water system will prosper,” Wilson said.

In his free time, Wilson has a wife and family, and is an accomplished amateur nature photographer. He chases latitude and longitude when it comes to witnessing solar eclipses and has been known to travel across several states to photograph the phenomenon. Wilson also teaches Science of Water classes at ASU in Havasu.