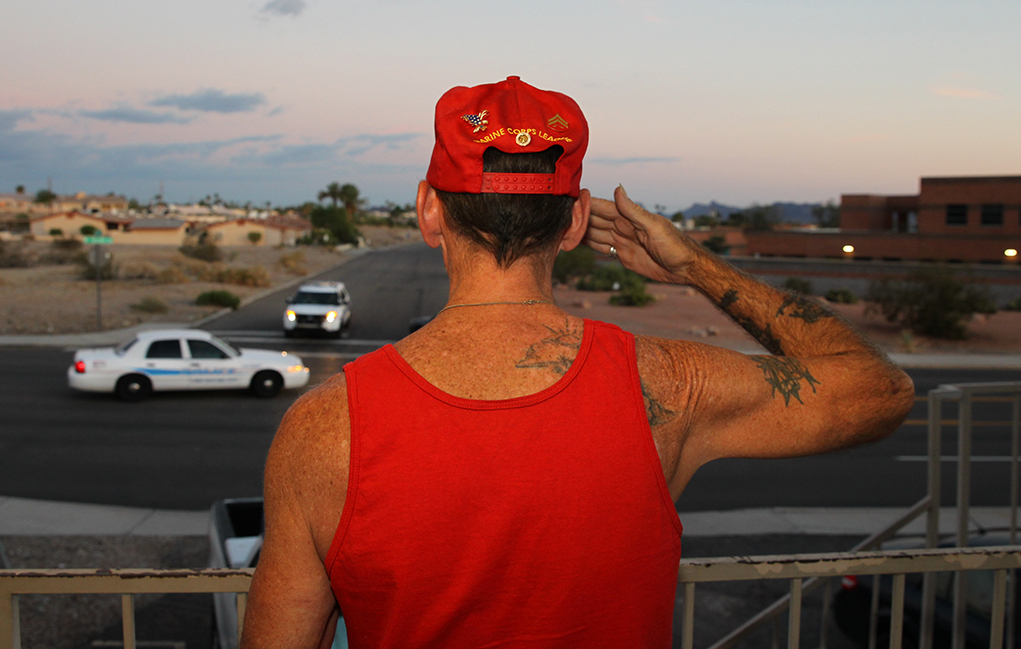 When the Lake Havasu Police Department changes shifts, patrol and motorcycle officers often receive a send-off as they leave on patrol.

As the patrol officers pull out onto McCulloch Boulevard to begin their shift, straight ahead of them a man stands on his second-floor apartment balcony next to his large American flag and salutes them as a way to thank them for their service. Sometimes he crosses himself by touching his forehead, the center of his chest, and the left and right sides of his chest. That is Eddie Dunn’s way of telling them he is praying for their safety.

Lake Havasu Police Officer Jerry Smith has seen Dunn saluting him from the balcony. He said, “It was great to see someone in the community do that for our police officers. We appreciate it and it is a great start to our day when we see that.”

Dunn served in the Marine Corps from 1972 to 1976. He served in Vietnam with the 4th Marines Regiment to help with the evacuation of Phnom Penh, and later for the fall of Saigon.

When he was without a home about a year ago, the Lake Havasu Marine Corps League helped him out, as well as the Veterans Resource Center, which helped him get into an apartment.

Dunn was grateful for everyone’s help and repaid them by volunteering much of his time to the Marine Corps League to give back to the community. And give back he has, in spades.

Dunn participated wherever he was needed, eventually becoming a member of the League’s Rifle Squad − part of its Color Guard. The Rifle Squad presents the Rifle Salute at funerals and memorials.
Frank Blain, Commandant of the Marine Corps League, Detachment 757, Lake Havasu City, said Dunn is well-liked and respected, and can be counted on to help whenever help is needed. 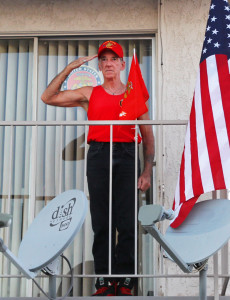 “When Eddie came to the League, he was looking for purpose in his life. He joined the Color Guard and quickly became grounded in the League’s mission of assisting veterans and their families. After a short period of time, Eddie went through a very personnel and trying time in his life. His brothers in the League helped him through this time and became his family. Eddie responded by further participating in the Marine Corps League’s mission, and personally helping other veterans on his own. Whenever he is asked to help with any project, he enthusiastically replies, ‘Aye, Aye, Sir.’ Eddie is one of the sharpest Marines in the Color Guard and takes tremendous pride in the wearing of the uniform and represents the Marine Corps League with equal pride.”

Wanting to do even more to help the community, Dunn also volunteers at Veterans Thrift, a local nonprofit run for the benefit of veterans in need. Veterans Thrift relies on volunteers to help run the shop, and Dunn is always ready when they need someone to pick up or deliver furniture and donations. He has delivered wheelchairs to veterans, and recently delivered and set up a hospital bed for a Havasu veteran who was recovering from an accident.

“I like to do this,” Dunn said. “I’ve been blessed, and now I want to help others who maybe are in a spot like I was. I feel like this is my calling now.”

Dunn doesn’t limit his help to veterans; if a nonveteran needs help moving or anything at all, he steps up.

“My whole life has been a struggle,” Dunn explained. “I’m sad about all the vets who are committing suicide, but I don’t know how to help. I just don’t want the same thing that happened to us (Vietnam veterans) to happen to today’s veterans. I admire the kids today who are doing five, six, and more tours. They’re going to need our help. We all need to support our military men and women.”

He helps the community in many ways. When Living Word Church gave a dinner recently for women, he was there, serving and waiting tables.

Dunn is said to be a very humble man, and hesitant to accept accolades for what he does. “It makes me uncomfortable getting attention for helping people. I don’t ask for anything in return when I help others. I just want to help people who need it. Like the Bible says, do it for the glory of God.”

One Response to “Citizen Spotlight: Eddie Dunn − Watching Over Our Police”