Citizen Spotlight: A Hero Among Us 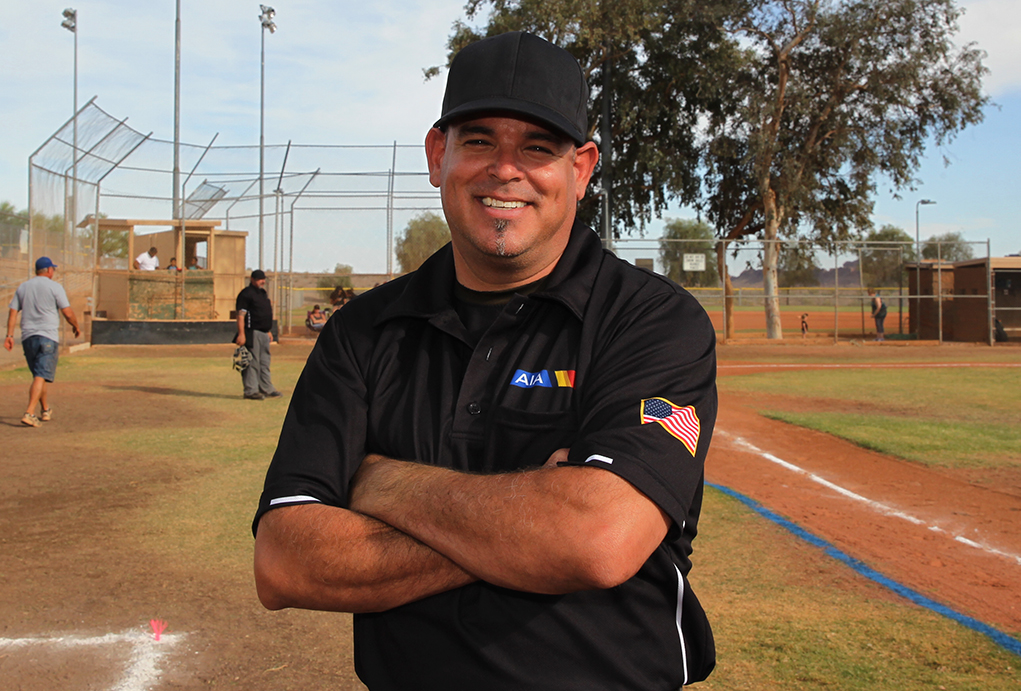 Heroes don’t wear capes and their beacons are hardly ever a clear-cut image against a hazy city sky. But heroes hide everywhere; their good deeds are not unnoticed, but their impact is rarely emphasized.

If you’ve ever been to a local sporting event, you may have seen Chris Gall geared up in black and white or making the calls at the head of a dusty diamond.

In 1990, Gall joined the Marines. “My military experience was eye opening to say the least,” he said.

He deployed three times and saw combat in Somalia, where five of his friends were wounded. “Yes, there were times that were really bad, but that is part of the military,” he said. “I loved the time I spent in there and the friends I made.”

He is part of the Lake Havasu Marine Corps League Detachment 757 and a member of the honor guard color guard, performing at military funerals for local veterans.

“I have been in the league for three years and love every minute I spend with these guys who have given so much to our nation and still continue to give to their community,” he said. 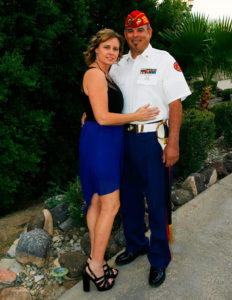 Reina and Chris Gall pose for a photo at a Marine Corps birthday dinner. Jillian Danielson/RiverScene

“I have four girls: Terri, Mandi, Taylor and Addy, and they mean the world to me. My wife is the best part of me. We have been married for 21 years and she has been by my side through everything. My family is the main reason I am still around today and I have a hard time going a day without seeing my girls,” he said.

At age 28, he was diagnosed with cancer, followed by two massive heart attacks a couple of months later. More recently, he had yet another health scare, his heart was racing at 170 beats a minute, requiring a shock of one hundred jolts to revive him.

“Now I have a pacemaker/defibrillator put in my chest and it has been a little scary. …But I do give credit of my healing to God and all the people who prayed for me,” he said.

Gall is a role model for young athletes throughout the city. For the past six years, he’s been doing organized officiating, but he started out with Parks and Rec. He answered an ad about reffing nearly 20 years ago, and began reffing for flag football and basketball games at the elementary and junior high level.

“Then about eight years ago, I saw a Pop Warner game and knew I wanted to start doing real football. I talked to an umpire there (Bob Smith) about what to do and he pointed me in the direction of signing up with Arizona Interscholastic Association to do high school games and Pop Warner games,” Gall explained.

As the football season wound to an end, Gall was persuaded to start officiating for basketball and baseball games as well.

After getting permission from his commissioner, Gall officiated for his daughter’s games too. “But I was always harder on her so her strike zone was huge. Later at home, she would tell me she was safe on a play,” he said.

“I umpire because it keeps my mind busy and I enjoy the interaction between the other officials and kids. [It] helps with the emotional things I have dealt with from the Marines and I love the structure that the games bring,” he said.

As for his favorite sport to officiate, Gall said he’d have to pick football because of its fast pace, but softball is his “quick second.”

Gall never expected reward or recognition. But for the impact he’s made on the athletic vein of Havasu, he received the 2015 ASA Umpire of the Year award for the Arizona Northwest District in softball.

“All the thanks for this goes to my wife and family because of all the time I am away from home,” he said.

“I was taken in by the other officials when I first started and they trained me, helped me when I needed it, and answered all my questions that I asked,” Gall said. He also mentioned that all of the officials he’s worked with have taught him something beneficial.

Jokingly he adds, “If there are any people out there that would like to get yelled at by coaches and parents, you should sign up to officiate, too. Just kidding; it isn’t that bad. But know that not everyone is going to like your calls and once you realize that, it gets easier.”

Chris Gall is living proof that while heroes don’t wear capes, they may wear a military uniform, a pacemaker, stripes and a whistle, or even a face mask and black padded clothing.

4 Responses to “Citizen Spotlight: A Hero Among Us”