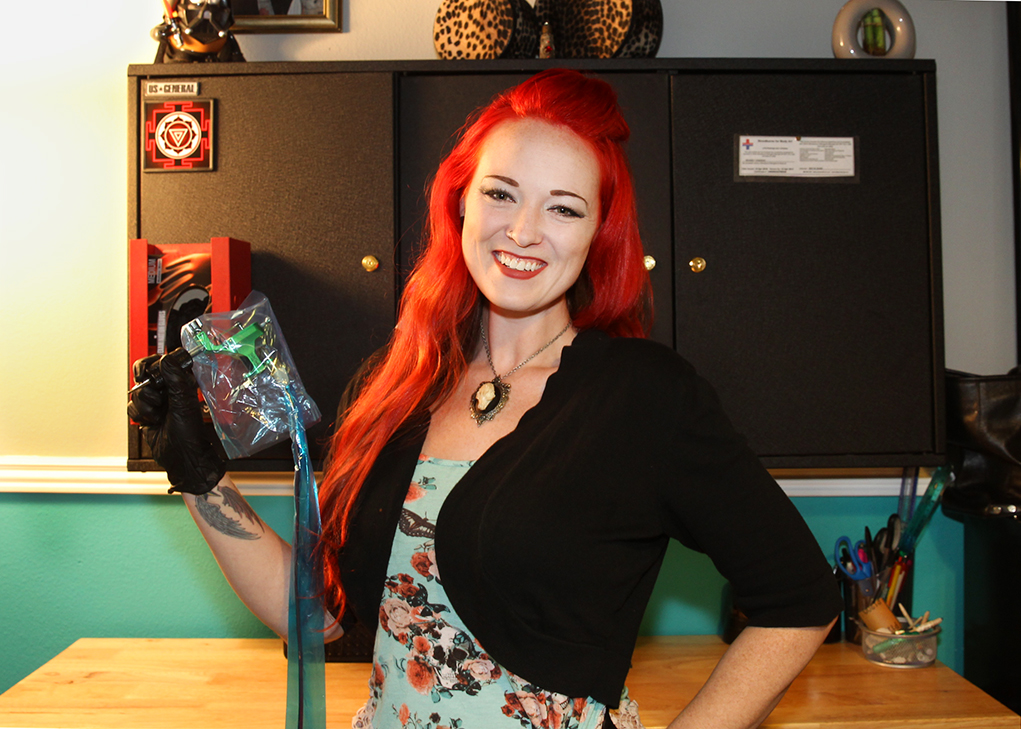 Brandy “Red” Kinnikin – who is one of only a few woman tattoo artists in town –  has logged 2,000 tattoos in her four years at Defiant Tattoo in Lake Havasu City.

“I love watercolor, I love dot work, I love realism, I want to do everything,” Kinnikin said.

Kinnikin’s style is about customer service, art consults, taking the time to fit the tattoo and perfecting the design before any needles are prepped. It’s a process. 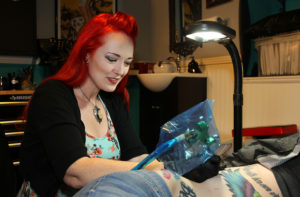 “I wanted it to be like those that come in here would be like friends, we would say ‘hi’ on the street and give hugs,” Kinnikin said. “The fact that I can touch everyone’s life in a positive way and be part of their life forever, I don’t dread my job. I love coming here, and I love my job.”

Kinnikin tracks her clients by keeping files on each that includes their allergies, medical conditions, colors used, and if the tattoo is eligible for free touch ups.

“Once you go to a tattoo artist you get comfortable with them,” Kinnikin said. “The majority end up coming back.”

One client, 20-year-old Katrina Law, of Havasu, is a repeat customer. Five of her nine tattoos are at the hands of Kinnikin. Law arrived in the shop wanting a large tattoo on her torso. Kinnikin stopped the momentum with concerns of Law’s age, and what possibly could happen when that same skin stretches during the probability of pregnancy at some point in the course of the young woman’s life.

“My goal is in five years, you still love it,” Kinnikin said of her artwork. 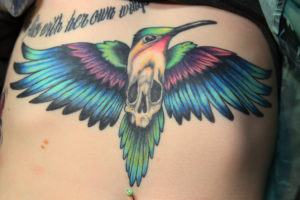 “I wanted it,” Law said. “It was my first big tattoo and she just wanted me to think about this. She really cares about it.”

Kinnikin started tattooing eight years ago, in her 20s, while still living in her home state of Montana.

“Tattooing scared the crap out of me because it is permanent,” she said.

Kinnikin’s tattoo apprenticeship was at Every Mother’s Nightmare tattoo shop in Montana at the elbow of a very old-school tattoo artist.

“My whole family, my parents, are artists,” Kinnikin said. “When I was little my dad always had me into painting and tattoos. My dad was my biggest influence but I never got to tattoo him before he passed away three years ago.”

Kinnikin’s father, who worked as a photographer for the Seattle Seahawk’s, drowned off the coast of Hawaii.

“He was huge into artwork,” she said. “When I was little, he used to get after me for coloring outside the lines or not highlighting here or there. But, in a good way.”

Today, Kinnikin works alongside Defiant Tattoo shop owner Reverend Ratt, of East Los Angeles. Ratt has been in the business for 18 years, seven of which have been right here in Havasu.

In 18 years, Ratt never has had a permanent-resident tattoo artist who is a woman. It’s not that he hasn’t looked for one, or wanted one, it’s just such a rarity in the industry.

Kinnikin’s studio, Tattoos by Red, is located in Defiant Tattoo, at 30 Scott Drive, Suite B, in Havasu. For more information, contact Kinnikin at 406-544-1857.