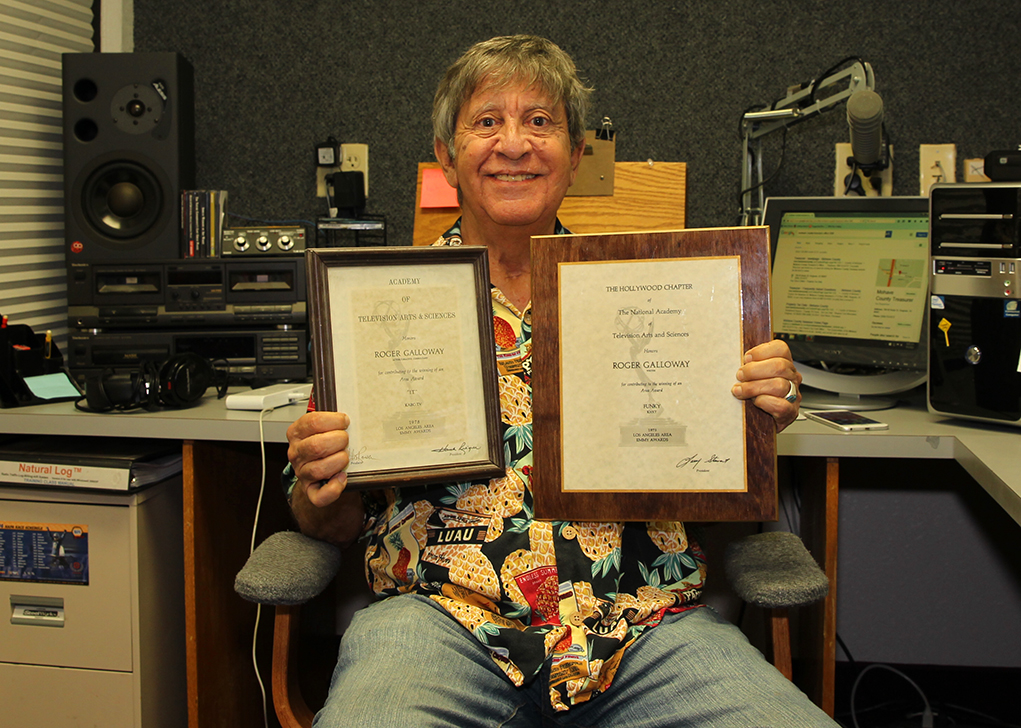 Roger Galloway was extremely adventurous when he was a boy, and said he had an imagination “like you wouldn’t believe.”

Galloway, long-time host of “Speakout” on local radio station KNTR, has lived a life many dream of but few ever achieve. His entire life has been wrapped around movies, TV and broadcasting. For as long as he can remember, he was obsessed with movie stars and the lure of Hollywood.

Long before he was old enough to know how difficult it would be to break into the entertainment industry, Galloway knew he wanted to go to Hollywood some day and be part of that wondrous world of movies and TV. Unlike many entertainers who follow in their parents’ footsteps, there was absolutely no one in his family who was in entertainment, so he had no idea where his fierce desire for the stage and love of the arts came from.

“In fact, my father’s life couldn’t have been more opposite from mine,” Galloway said. “He was an operations manager for a large bakery corporation, and he never approved of my ambitions. But my mother was always very supportive of me.”

Galloway recalls how his dreams took over his life when he was small. He had a newspaper route when he was 10 or 12 years old, but he wasn’t thinking of playing baseball as he peddled his bicycle around town.

“I would pretend I was creating a movie with my favorite stars in it. I would be the narrator and introduce Jimmy Stewart or Roy Rogers or Gene Autry. All along my paper route I would build a plot — and every story I dreamed up was always finished exactly when my route was over,” 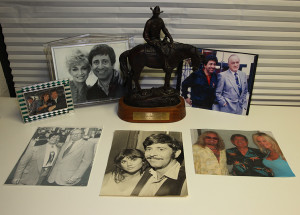 When he was 14, Galloway started his career for real when he acted in “The Taming of the Shrew” in a community theater. He went on to act in more than 100 plays.

Galloway was born and raised in Charleston, W.Va., and when he entered college, he drove a bakery van for four years to pay his way through college. He didn’t leave Charleston until after he had graduated from West Virginia University with a degree in speech, with an emphasis in drama. He then attended the University of Colorado and the University of Arizona in Tucson and obtained master’s degrees in drama. While at U of A, he joined the Air National Guard. During those college days, Galloway was a radio newscaster at WCAW and WZAZ.

After completing his education, his only thought was to head to Los Angeles to get into movies and TV. He had watched the Oscars every year since boyhood, and Galloway said “It was something I had to do. Many of my friends were going to New York and tried to convince me to go with them, but I had to keep my promise to my ‘kid’ Roger. Gene Autry and Roy Rogers were my idols, and they were in Hollywood, so that’s where I was going.” 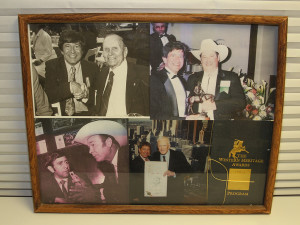 Galloway eventually did go to New York in 1978 for two and a half years to produce television specials. He produced “Trucking in Nashville,” featuring big-name country singers, followed by six other shows featuring Barbara Mandrell, Tanya Tucker, Martina McBride and Hank Williams Jr. He also wrote and produced Disney’s “Falling for the Stars” with Richard Farnsworth, Robert Duvall and Buddy Ebsen. A series of specials he wrote and produced called “Legends of the West” starred Jack Palance and won the Wrangler Award from the Cowboy Hall of Fame for Outstanding Western Writing.

“They were the most successful years, financially, of my career.”

Then he decided to buy a bar and restaurant in Las Vegas.

“That was the biggest mistake of my life,” Galloway said. “I was an absent owner and the place failed. I lost a lot of money.”

Galloway turned again to radio and landed the key celebrity reporting job with Westwood One, the nation’s largest radio network. As National Entertainment Editor and Reporter, he covered the Oscars, the Emmys and the Grammys. Although his dream was to become an actor, and he did do some acting, it turned out that his niche was in broadcasting.

While in Los Angeles, Galloway produced “Dusty’s Treehouse,” which earned a Peabody Award, and played the lead in the children’s series, “IT!,” which ran for two seasons on ABC and won an Emmy for writing. 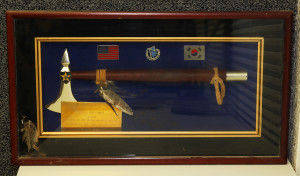 A thank you gift given to Roger by some of the US troops. Jillian Danielson/RiverScene

Galloway also idolized Bob Hope, and he ended up appearing with Hope when he entertained the troops at the DMZ in Korea in 1988. It was a heady experience, not only entertaining the troops with Bob Hope, but also with Brook Shields and Gloria Estefan. One of his most prized pieces of memorabilia in his collection is a custom tomahawk that the troops presented to Hope, Shields, Estefan and Galloway.

During his long career, Galloway starred in and directed plays and musicals, acted in and produced children’s television shows, wrote and produced documentaries for television, and worked for many radio stations as a news and entertainment broadcaster.

Galloway’s connection to Lake Havasu was his parents, who moved here in 1976. He visited them often, and in fact said every TV show he wrote was written while he was in Havasu. When visiting in Havasu he often took his typewriter out on a pontoon boat to do his writing.

Although Galloway never had a desire to live here, sometimes life has different plans. On March 28, 2004, very late at night when he was driving his convertible with the top down, from Los Angeles to Havasu to visit his mother, he lost control of the car at Vidal Junction near Parker. The car flipped six times, and he was thrown 65 feet from the car.

He was gravely injured, with little hope of being found before he died. But two miraculous things happened.

Two guardian angels were on the deserted road that night, in the form of an Orange County, Calif., fire captain and paramedic who was driving behind Galloway, and a registered nurse coming from the opposite direction. Both stopped and rendered aid until a medical helicopter arrived to fly him to Las Vegas.

Galloway was in a coma for six weeks, and when he recovered consciousness, he had a long road of recovery ahead of him. He had four broken ribs, a skull fracture, facial fractures, collapsed lung, broken shoulder, cracked vertebrae and his left arm was crushed. He had a total elbow replacement, but never regained full use of the arm, and today he still is unable to raise his arm above his chest. He spent months in the University Medical Center in Las Vegas and then a rehab center in Kingman. He eventually walked and talked again, and lived with his mother in Havasu while recuperating.

In a 2007 interview, Galloway said he needed a peaceful place away from the hype of L.A. 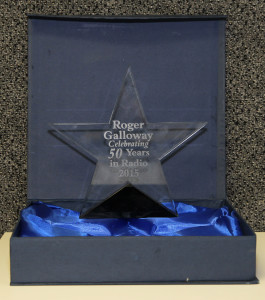 An award given to Roger on his 50 year anniversary in broadcasting. Jillian Danielson/RiverScene

While at his mother’s, she tried to talk him into remaining in Havasu. She told him he could make a name for himself here — and he laughed. His dream was still in Hollywood.

But he needed to get involved in something until he was ready to leave Havasu, so he got back into radio news and entertainment — and he never left. Havasu became his new home. Galloway likes to say his mother was right. “I became a big fish in a little pond.”

Many young boys and girls dream of being in the movies someday, but life gets in the way of those dreams and their paths eventually take very different turns. Galloway is one of the few who were able to make his dream come true.

“It’s been a roller coaster ride,” Galloway said, “but I wouldn’t trade it for anything.”

One Response to “Citizen Spotlight Roger Galloway: From Hollywood To Havasu”