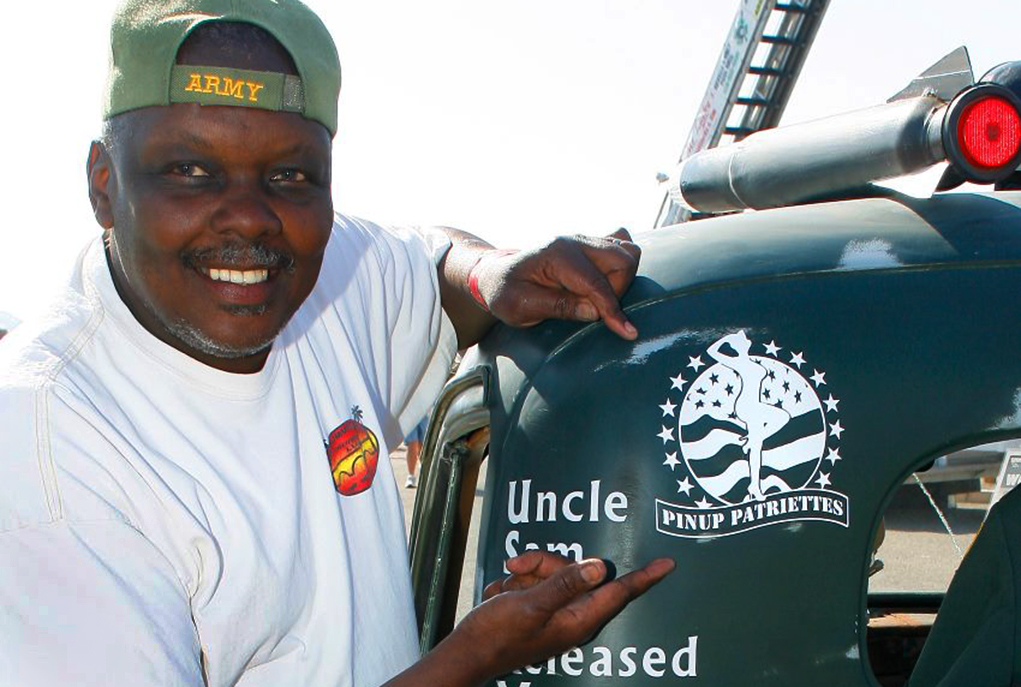 “He’s a jack of all trades — a carpenter, an excellent mechanic, a good cook; he could fix anything. He’s Mr. Fixit,” Beth Taylor confided. “He could even sew; he made clothing for himself and his nieces and nephews. When he was growing up, his parents owned a dry cleaners and tailor shop, and they taught him little things, so he came by it naturally.” 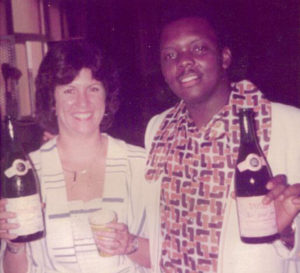 A photo of Beth and Tee in 1975. Photo courtesy Beth Taylor

Tee Taylor was raised in New Jersey and moved to Lake Havasu City in 1991. The Taylors have two grown children: a daughter Leah, who lives in Havasu, and a son Jesse, who lives in Denver.

A 20-year veteran of the U.S. Army, Tee Taylor has worked for the Lake Havasu Unified School District for 22 years, all of them at the high school. For 17 of those years, he worked for Aramark Food Services, the contractor that provided meals for the schools. He was one of the very first people hired by Aramark, and became the head cook.

Beth Taylor explained that when Aramark lost the contract, Taylor was sad because “he loved the kids and wanted to stay around them.”

And he did. He remained at the high school after being hired by the district as a security guard. 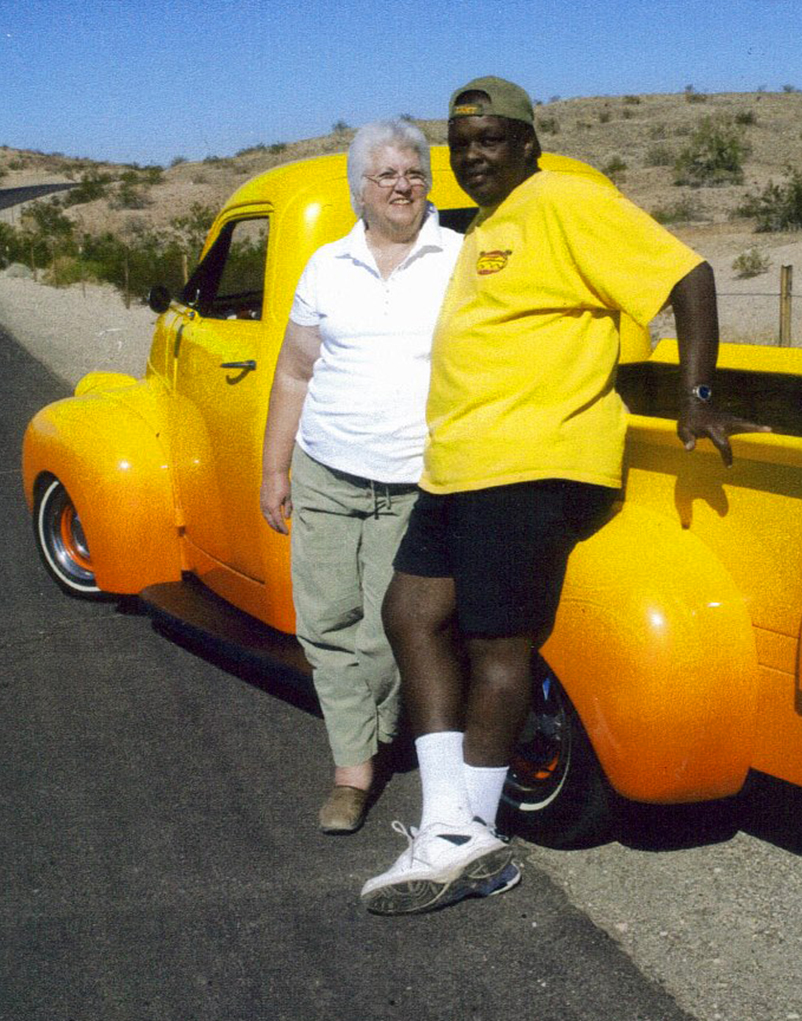 A scanned photo of Beth and Tee Taylor in 2011 during a photoshoot. Tee often would lend his cars for pinup photoshoots for local photographers and pinup models. Photo Courtesy Beth Taylor

Tee Taylor also loves classic cars. He has been a member of One Summer’s Night Cruisers car club for about 14 years. Taylor has several cars, “but his pride and joy is a 1947 Studebaker pickup, the same year he was born. He and a good friend, James Bagwell, painted it yellow, his favorite color. I think it was called ‘Tequila Sunrise.’ He also had an Army green rat rod which he exhibited at shows. The kids really liked it because it had bullet holes and he made a machine gun out of a crutch and mounted it on the car. He loved to see kids play in that car,” Beth Taylor said.

Still another of Tee Taylor’s passions is Christmas. He spends hundreds of hours planning and decorating their home for Christmas, just as his parents had always done.

He was featured last Christmas in a story in RiverScene Magazine about Havasu residents whose decorations were over the top. The Taylors use 30,000 lights in their display, and he synchronized them to music. They have inflatable figures and a Santa that sits in a rocking chair.  Tee Taylor said that seeing little kids sit in that rocking chair gave him great joy. 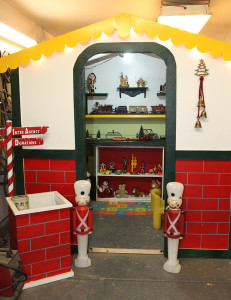 Last year, he added a Santa’s Toyland,  which he built himself using his woodworking skills, and which he encouraged children to walk into.

Tee Taylor said that many people want to donate something to help pay for the electricity to run the display that they enjoy so much. He accepts the donations, but then gives it all to Interagency Council of Lake Havasu City Inc., which amounted to $850 last year. People also bring pickup trucks full of food and toys, which also go to Interagency for families in need.

Tee Taylor has been very happy surrounded by kids during his years of working at the high school, his wife said.

“His one big hope,” Beth Taylor said, “and what he told his boss and all the kids, is that he wanted to walk across the stage with the kids for graduation in 2017. His birthday is in May, and he wanted to graduate with the kids on his 70th birthday.” 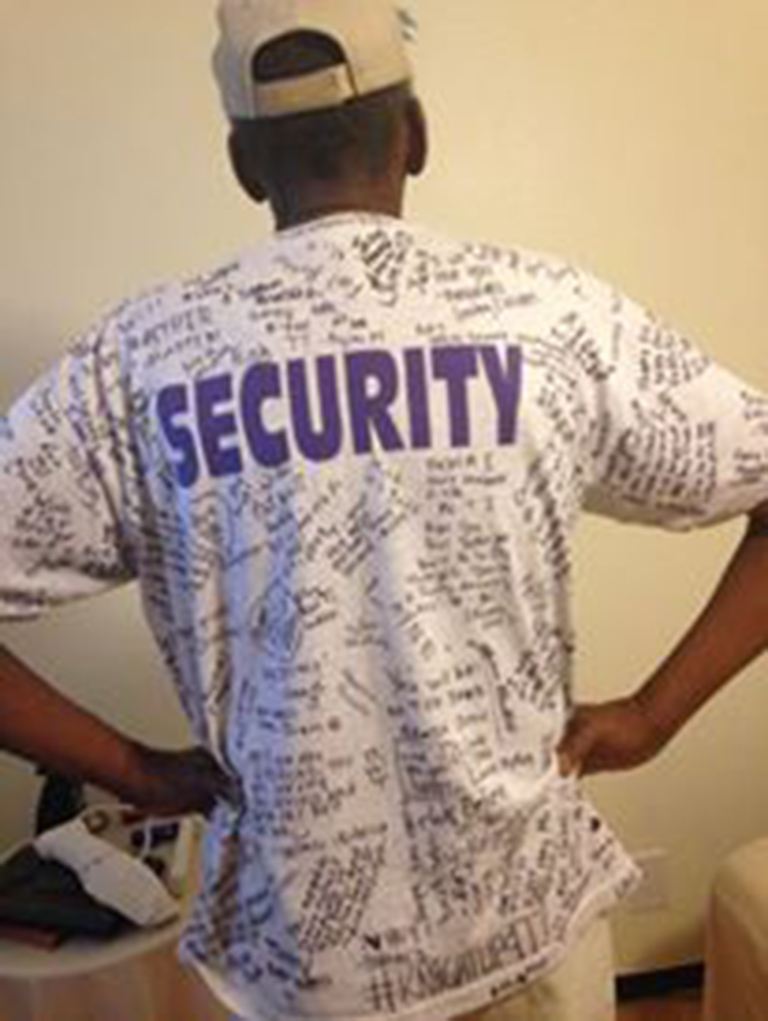 Tee wears a shirt given to him and signed by Lake Havasu High School students. Photo courtesy Beth Taylor

But that hope might not happen, as Tee Taylor was diagnosed with stomach cancer in February. It spread quickly, and on July 19, as he was leaving the local VA clinic after a routine appointment, he passed out and fell down. At the ER, doctors found that the cancer had metastasized and spread to his liver. The stomach tumor was bleeding and his blood count was dangerously low, which caused severe anemia. Doctors removed the tumor and two-thirds of his stomach, but they couldn’t risk reconnecting his esophagus, so he was given a feeding tube.

Tee Taylor had been in the hospital since July 19, returning home Thursday. He was told he had just weeks remaining, and Hospice of Havasu is in the home, taking care of his needs. 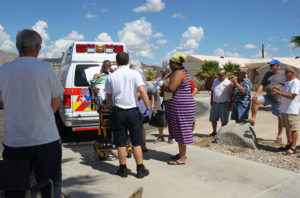 Family and friends of Tee and Beth line the driveway to welcome him home from the hospital Thursday afternoon. Jillian Danielson/RiverSCene

Beth Taylor said her husband was obviously very touched by the number of friends who were there to welcome him home from the hospital. Some of the high school students had made a “Welcome Home Tee” banner, and David Jones and Cliff Cook put up some Christmas decorations to remind Taylor of his biggest passion.

Explaining why he helped put up Christmas decorations, Cook said, “I wanted to do something to thank Tee for all the things he does for our community.” 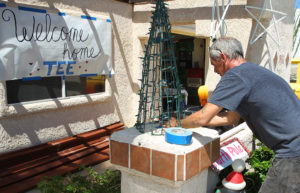 David Jones met Taylor about three years ago because they are both part of the Christmas decorating community. “He’s a great guy, does a lot for the community, like taking donations for Interagency,” David Jones said. “I met him just three years ago, but you don’t have to be best friends with someone to do something nice for them.”

Jones’s wife Glinde Jones knows Taylor quite well, as she is the bookstore manager at the high school. She described his personality and connection with kids.

“I met Tee at the end of May 2013,” Glinde Jones said. “I had just started working for the high school. It was senior prank day and Tee came by to give a heads up that the seniors would be on the move. He was having the best time playing cat and mouse with the kids. They all love him. He cuts up with them and makes them ‘do right’ all at the same time. Once things calmed down. we had a chance to chat and discovered we shared a common bond — we are both retired Army vets. It’s like always having family around. There are things that are just understood — no words necessary.” 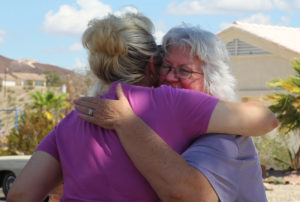 Beth receives a hug from a friend in the car club Thursday afternoon. Jillian Danielson/RiverScene

“Pot lucks at school were always some of my favorite days,” Glinde Jones continued, “as Tee is a phenomenal chef. His food not only looks good, it tastes good. Christmas came around and he and Beth came by to check out our lights. He was so impressed that he started his own light show and that bond just grew. We would shop, talk about the good old days of Army life and about getting ready for Christmas. I would come home from work and David, who is also a vet, would ask, ‘what’s Tee got planned?’ I would go to work and Tee would ask ‘what has David started building now?’ He is my family and my brother, and I am honored to have met him.”

“Tee is an amazing man at whatever he is doing,” said Becker. “He started at our food service building and affected our staff and students in a positive way there. When he transitioned into becoming one of our security guards he continued that positive effect on everyone. Our students and staff at LHHS are so lucky to have the opportunity to be around such a great role model, man, and human being.”

Cali George is the Career Center Coordinator at the high school and has known Taylor for many years.

“[Tee is] simply one of the nicest people I know, and he has a heart of gold,” George said. “Over the years, Tee Taylor has taught me so many wonderful things and I will forever treasure all of our conversations and his friendship. As a security guard at the high school, he’s been a part of my mornings each day, keeping us safe always with a smile — and the students love him! Tee’s Christmas Winter Wonderland will always be special to my family. Last year he added the train sets and my two grandsons went crazy. Dane still asks when can he go back to the ‘train guy’s’ house. Tee, you are so loved. Thank you for being a part of our lives in so many wonderful ways.”

*Editor’s note: Ronnie “Tee” Taylor passed away Thursday, Aug.18, 2016, just one week after our story was published. Our thoughts go out to the Taylor family.

Video tribute for Tee from the Lake Havasu High School:

Video tribute for Tee from the Pinup Patriettes:

Tee’s homecoming to his family and friends greeting him:

Photo gallery of Tee and Beth: 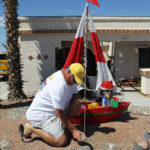 Cliff Cook sets up a sailboat in Tee Taylor’s front yard to welcome him home from the hospital with Christmas decorations. Jillian Danielson/RiverScene 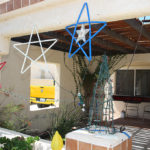 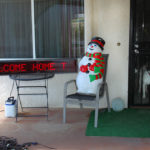 Tee and Beth’s dog Pepper stands in the doorway Thursday next to a homecoming sign. Jillian Danielson/RiverScene 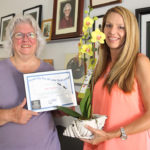 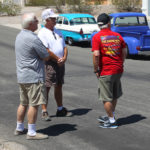 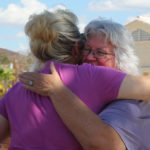 Beth receives a hug from a friend in the car club Thursday afternoon. Jillian Danielson/RiverScene 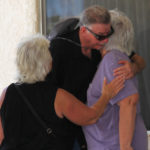 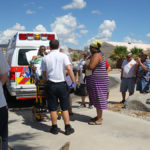 Family and friends of Tee and Beth line the driveway to welcome him home from the hospital Thursday afternoon. Jillian Danielson/RiverSCene 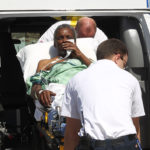 Tee Taylor wipes his eyes returning home from the hospital when seeing his friends line the driveway to welcome him home. Jillian Danielson/RiverScene 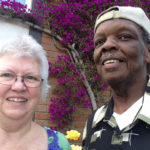 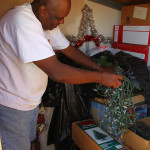 Tee Taylor pulls lights out of boxes in his storage for Christmas display. Jillian Danielson/RiverScene 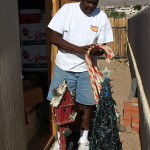 Tee Taylor gets Christmas decorations out of his storage to prepare his yard. Jillian Danielson/RiverScene