Countdown To The Renaissance Faire 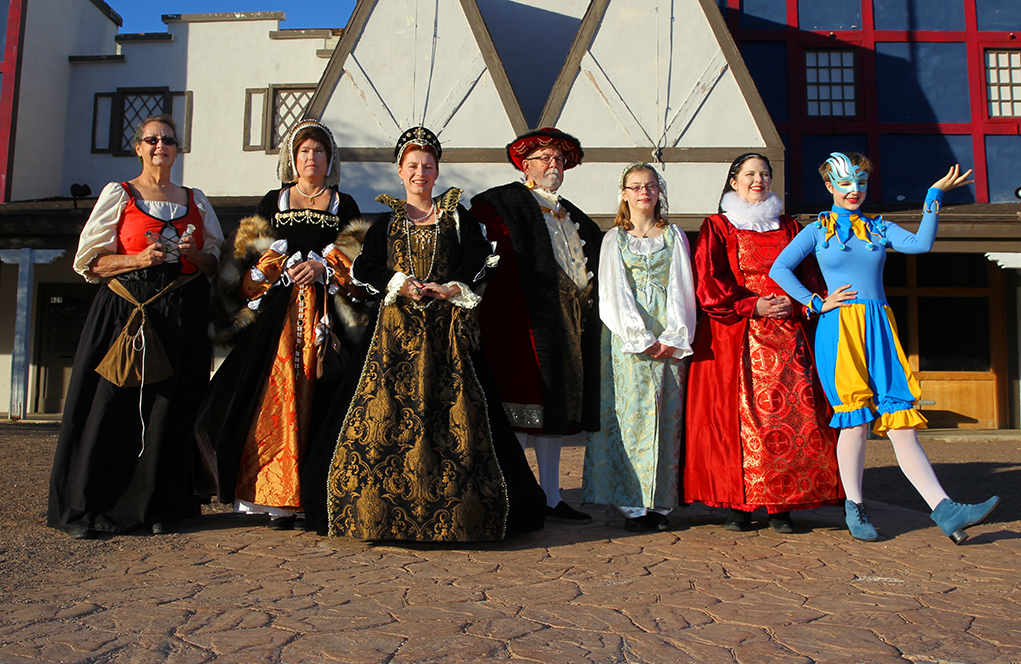 Hear ye, hear ye! Come one, come all to the first-ever London Bridge Renaissance Faire in Lake Havasu City. Faire dates are Jan. 1 and 2 from 10 a.m. to 8 p.m., and Jan. 3 from 9 a.m. to 1 p.m. The Faire grounds are located at Windsor Beach in Lake Havasu State Park, 699 London Bridge Road.

A Renaissance Faire is a festival with stage and street performers in period costumes, bringing medieval history to life in a fun & dramatic way. On several stages there will be jugglers, magicians, “gallows humor” comedians, minstrels, singers and dancers. Artisans and merchants will be present with a wide array of renaissance and medieval handmade wares for sale. There will be jousting and sword fights, a pyro juggler, bands/musicians, guilds, food and drink, arts and crafts, artisan demonstrations, The Royale Academie, Pirate’s Cove, Camelot, Faerie Garden and more.

Costumes are a very important part of Renaissance faires, and local seamstresses have been busy as bees for the past few months, creating period costumes for the Faire. 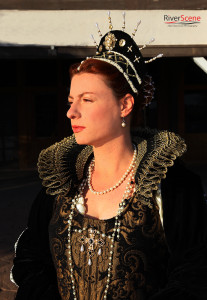 One such seamstress is Amber Vanderjagt, who did alterations of Queen Elizabeth’s costume and also created the Queen’s headpiece. She also created the full costume for Sir Francis Bacon, played by Robert Korol, who is a guitarist when he’s not Sir Francis. Vanderjagt said it took 20 hours of work to create his costume.

“I found everything I needed for his costume here in Havasu,” Vanderjagt said,” except for the 19 buttons, which I had to order online.” She made Sir Francis’s pants and doublet, undershirt and ruff.

Vanderjagt said she has enjoyed creating costumes and will be happy to sew costumes again for future Renaissance Faires in Havasu.

The Lake Havasu Museum of History also added numerous costumes and props from its collection to Faire participants.

Vanderjagt explained that she has done sewing and quilting for at least 15 years, but her main business is as a doula, assisting women before, during, and/or after childbirth. 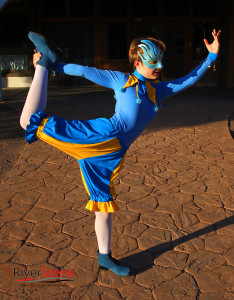 The New Year’s Eve Royal Ball will be in the Bridgeview Room at Shugrue’s Restaurant at 1425 North McCulloch Blvd, Lake Havasu City. Hors d’oeuvres will be served, and the Royal Court will be presented. There will be a magician, juggling comedian, live bands, photo booth, dancing and costume contests. Categories include most colorful/creative costume, most historically authentic, most royal, perfect pirate, most wanton wench and best of show (male and female).

The Royal Ball is sold out, but there is a waiting list in case of cancelations. To put your name on this list, email your request, including your name and phone number, to LBRFRoyalBall@gmail.com. 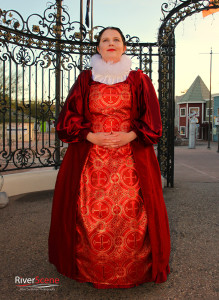 No Renaissance Faire is complete without a generous selection of delicious food, including  turkey legs, shepherd’s pie, Cornish game hens, pulled pork, kabobs, ribs, deep fried veggies, Indonesian fried noodles, and sweets such as ice cream, cookies, funnel cake, kettle corn, fruit tarts, and much more. The Troll Under the Bridge Tavern is sure to be the focal point of libationary expeditions. Wenches will take great care of you. Visit their tent and rest your weary legs. The tavern will serve a wide range of refreshments, including Guinness beer, imported and domestic beer, flavored malt beverages, and other family-friendly choices. A number of additional Renaissance libation vendors will also be scattered throughout the Faire.

The Old World Guilds were the trade unions of their time. Each guild presided over the training, membership, and regulation of its trade. The following guilds will be set up at the London Bridge Renaissance Faire. 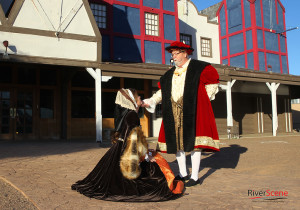 The Loch Mead Village Guild from Nevada will be the backdrop for the jousting arena. With flags flapping in the breeze atop their tall white towers, you won’t be able to miss them. Visitors will be able to dine with Loch Mead members in the VIP Pavillion. It will be a raucous meal, and one you’ll want to be a part of!

The Battle Wolf Guild is an armed, privately owned vessel commissioned for service loyal to whomever is the highest bidder. The crew consists of privateers and mercenaries of the seas. On this journey they carry letters of marque from Her Majesty, Queen Elizabeth. In times of war, they specialize in the capture of enemy merchant shipping. 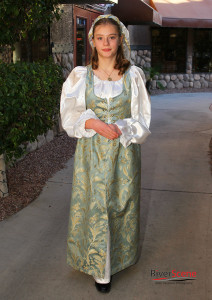 The Imperial Rope Makers Guild was formed five years ago to share rope making throughout the empire. It is their endeavor to bring education and hands-on experience to adults and children alike. The guild will give a brief history of rope making, its uses, and what other things can be made out of the same fibers used to make rope. Children will be able to make a small piece of rope they take home with them. The guild’s newest venture is whip-making

The Flagstaff Early Music Consort can be found camped out at the Faire to add to the ambiance in the shire. Visit their encampments scattered throughout the grounds as they live the Renaissance life full-time. Expect to see demonstrations of skill, live combat tournament in full suits of armor, singing and storytelling, battle recreations and pirate lore.

These guilds pride themselves on public interaction.

Be sure to look for Evan Gray, the bagpiper, The Piobaireachd is deep and hypnotic, and is one of the oldest classical music traditions in Europe. Along with marches and dance music, see Evan on the stages to hear this rare music of the Gaels and learn some bagpipe lore. 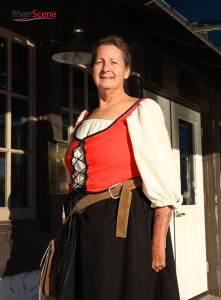 The Queen’s Tea and The Royal Victory Breakfast will be held near the main stage on the Faire grounds. The Queen’s Tea will be offered on Friday and Saturday at 11 a.m. and 3 p.m. and participants will have their photo taken with the Queen and the Royal Court.

Come to the Faire, and celebrate Elizabethan style!

For more information, call 928-846-7093. Leave a message and it will be forwarded it to the appropriate person to call you back as soon as possible.

Where are the restrooms? = Whither be the privies?
I’m thirsty = I be parched.
Please wait on me! = Prithee, attend me!
I have to go= I must away
Thank you = Grammercy
Sailor’s cheer = HUZZAH!

are = art
ask, request = beseech
away = aroint
between = betwixt
can = canst
comes, coming = cometh
curse = fie
do, does = dost
done, made, created = wrought (e.g.,  See what God hath wrought)
enough = enow
friend, companion = fere
from now on = henceforth
from where = whence (e.g., Whence, comest thou? translates as Where do you come from?)
goodbye = fare-thee-well
grow, become = wax
has = hath
here = hither
horrible = pudh
know = wit ( e.g., Canst thou wit what the day shall bring?)
linger, deliberate, wait, stay, or pause = tarry
maybe = mayhap; perchance; belike
never = ne’r
no = nay
nothing = naught
often = oft
over there = yon
please = prithee; pray
sell = syllan
silverware, fork = pece
stand above others in a snobby way = tallt
there = thither
think or suppose = trow (Wilt thou labor for naught? I trow not!”)
to where = whither (e.g., Whither thou goest, I shall go translates as Where you go, I will go)
very, truly = verily
why = wherefore
will = wilt; shall; shalt
years ago = yore
yes = aye, yea
you = thee; thou (polite form of thou = ye)
your = thine; thy 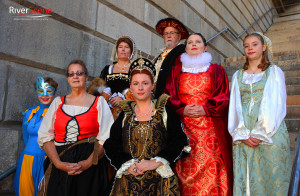 Members of the Renaissance Faire cast pose for a photo in front of the London Bridge. Jillian Danielson/RiverScene