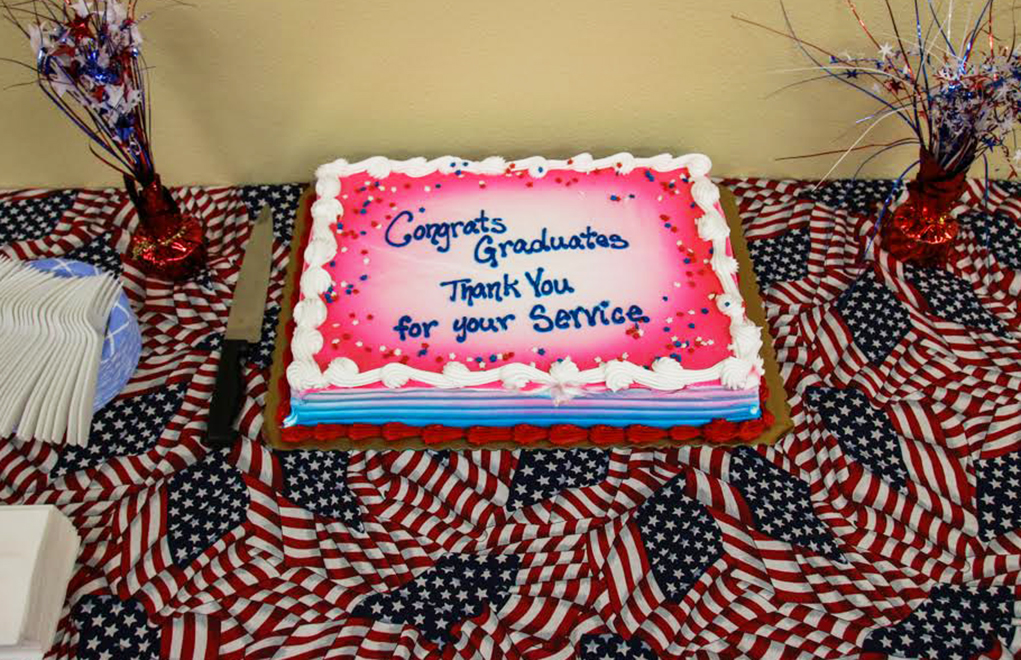 The Lake Havasu Veterans Treatment Court (VTC) graduated four veterans July 8. Judge Mitchell Kalauli congratulated them for completing the program and presented each with a certificate and a challenge coin. A total of 51 veterans have graduated from the program, and there are currently 52 veterans in the program.

The change in veterans at graduation is remarkable. When they attend their first court session, many are grim and fearful and expect to be chastised by a no-nonsense judge. They are surprised when Judge Kalauli stands up and extends his hand to the veteran, telling each one, “Thank you for your service.” 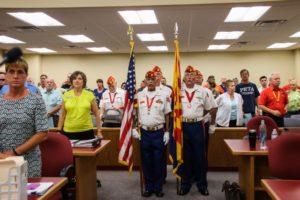 Veterans have said they are immediately put at ease and feel respected. To add to the welcoming environment of his court, Kalauli asks each to state his or her name and branch of military service. Many in the courtroom respond with “Hooah!,” “Oorah!,” “Anchors Aweigh!,” “Aim High!,” or “Always Ready!,” in response.

When graduation arrives, those same veterans have become confident and relaxed, and are very happy as they walk up to Kalauli to receive a challenge coin and a plaque congratulating them on their successful completion of the program. Everyone in the courtroom, which includes members of veterans’ organizations, mentors, city officials and other supporters of the Veterans Treatment Court, applauds each one and lingers afterward for a piece of the celebratory cake.

Judge Kalauli is also a veteran. He proudly served in the Utah Army National Guard from 1987 to 2003. His unit was deployed to Germany in 1991 in support of Desert Storm. As a veteran, Judge Kalauli can relate to each participant and understands the culture dynamics and the services available. He truly cares for each veteran participant and pushes them to succeed. 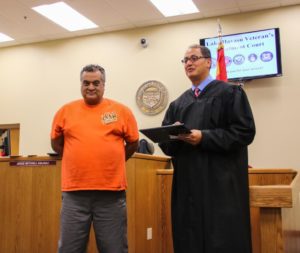 Kalauli frequently reminds veterans that he requires only three things from them: “that you show up, be honest, and try.” At times he must remind them that they broke their promise to the Court and there are repercussions. The veterans in the program are so appreciative of the treatment they receive and have such respect for Kalauli that on the rare occasions he resorts to sending a veteran to jail for a few days, the veteran nods and accepts the punishment with no complaint.

The five veterans who just graduated had chosen to participate in the Veterans Treatment Court rather than a regular court, even though it meant having regular and frequent court appearances, drug and alcohol testing, and attending counseling and classes regularly. Some complete the program in six months, others in twelve or eighteen months. But every one of them thanked the Court and all who provided services to them, some saying that the program saved their lives.

Typical of the praise for the court program is this statement from one of the graduates:

“I remember being amazed by the fact that this wasn’t just about what we did to end up there – not to these people. They cared about more than that. Our lives mattered more than our mistakes. I had total strangers sincerely interested in my living circumstance, financial well-being, job status … I was almost overwhelmed. To be honest, I was initially skeptical and it took a few visits for the truth to set in: these people were genuinely interested in my well-being.

“From the first appearance to graduation day there was nothing but encouragement and support. Their faith in my outcome was occasionally greater than mine. Nonetheless they were always there, always ready to lend a hand, some guidance if needed. So thank you to all members of the Veterans’ Court. Thank you for being patient when we take time to believe. Thanks for believing in us when we might not yet. Thanks for reminding us that we are more than our mistakes. Thanks for helping out so many ways, so many times.”

And from other previous graduates: 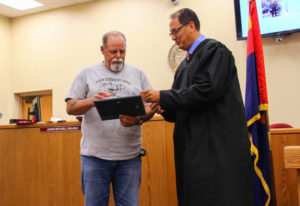 “My experience with Veterans Court was 100 percent positive and has sent me to people that I never would have (gone) to on my own. The last thing a Marine ever does is ask for help, as it’s not in our training. We are veterans and we all have been to the V.A. We all have seen those pamphlets on the wall and we all have ignored them. Judge Kalauli has no interest in taking your money or sending you to jail. His only interest is helping us veterans achieve our goals, so we won’t have to go through the court system again. It has truly been an honor meeting Judge Kalauli and all the Veterans Court staff. I am very thankful for what they do, not just for me, but for all veterans.” – Arthur Scott

“At first I felt that Veterans Treatment Court was B.S. but as I progressed, I realized how much everyone actually cared. During Veterans Court, I received so much help and support for all the issues I was facing. Since graduating, I have missed the camaraderie and look forward to being involved as a speaker or a mentor to my fellow veterans.”

“I stood tall before Judge Kalauli and the first words he spoke directly to me were, ‘Thank you for your service.’ There was none of the usual contempt and disdain I was used to. I looked into the eyes of a judge and saw mutual respect. It was, for me, the first glimmer of hope I had ever felt in a courtroom.”— Landon Karlen

Many residents are unaware that Lake Havasu City has a Veterans Treatment Court, or why.

One in six veterans who served in Operation Enduring Freedom and Operation Iraqi Freedom suffer from a substance abuse issue. Research has found a link between substance abuse and combat-related mental illness. If they are untreated, mental health disorders common among veterans can lead to involvement in the criminal justice system, or worse, suicide. Statistics show that up to 22 veterans a day are committing suicide. 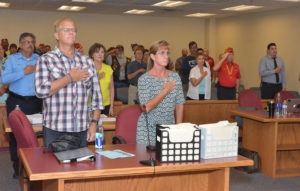 By 2008, it was generally accepted by veteran advocates that veterans had specific and significant problems with Post Traumatic Stress and Traumatic Brain Injury and that they should be handled in the criminal justice system in a way that recognizes and treats those problems. The VTCs pay special attention to the stressors and mental illnesses that follow many veterans home and attempt to rehabilitate veterans using structured treatment programs rather than relying on punitive sentences.

The first Veterans Treatment Court was established in 2008 in Buffalo, N.Y., as a hybrid drug and mental health court to serve veterans who were struggling with addiction and/or mental illness by diverting them from the traditional criminal justice system into a specialized Veterans Court.

The success of that first Veterans Treatment Court led to other cities around the U.S. adopting specialty courts for veterans. According to JusticeforVets.org’s most recent statistics of Dec. 31, 2014, there were 266 Veterans Treatment Courts in our country, with hundreds more in the planning stages. Chris Deutsch, Director of Communications for Justice for Vets, explained that the total rises to 350 courts if special tracks for veterans in traditional drug courts and mental health courts are included.

Veterans Treatment Courts require regular court appearances, as well as mandatory attendance at treatment sessions and frequent and random testing for substance use (drug and/or alcohol).  Judge Kalauli explains that, “Sobriety is an essential part of treatment that leads to the long term success of the Veteran long after they graduate the program.”

Veterans respond favorably to this structured environment, given their past experiences in the military. But the program isn’t limited to veterans; Lake Havasu’s VTC is seeing more and more active duty military in the program. They tend to do well in the program, as their unit commanders cooperate with the court and follow their progress.

The goal of the Veterans Treatment Court is to rehabilitate and restore veterans as active, contributing members of their community. The VTC program focuses on veterans who are currently in, or entering, the Criminal Justice System. Each veteran must sign a contract promising to follow the terms of the Veterans Court. The Court creates and supervises treatment plans to address the underlying causes of veterans’ behavior and substance abuse issues. Issues commonly addressed by the treatment programs include PTSD, Traumatic Brain Injury, anger issues, domestic violence and drug and alcohol abuse. Some, but not all, charges may be dismissed when veterans successfully complete the program. 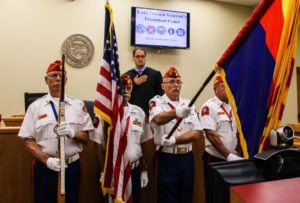 Havasu’s VTC opened with one veteran in the program. As time went on, more veterans chose to go through the VTC program, and today there are 53 veterans in Havasu’s specialized court program.

Called affectionately by some “the singing judge,” Kalauli plays the ukulele and sings at veterans events in Havasu. His five children are accomplished Hawaiian dancers and often accompany him.

Judge Kalauli realized early on the importance of camaraderie in the court program and instituted monthly “strolls” and hikes. Program veterans have come to enjoy the hikes, which are also attended by family members, mentors and court personnel. Participating in an outdoor activity surrounded by other veterans and those who help them in the program helps veterans in the court system feel that everyone is truly committed to helping them succeed. Veterans in the program have come to look forward to the activity.

Kalauli also realized the importance of family involvement in the veterans’ success in the VTC, and during court sessions he gives out gift cards donated by area businesses to a selected veteran who brings family members to court. To further encourage family involvement, he created a “Family Day” held once a year. At these picnics or barbeques, well-attended by VTC veterans, mentors, city personnel, and members of the Veterans Resource Team, children’s games are provided as well as a potluck that includes Hawaiian rice personally prepared by Kalauli.

The success of VTCs is proven by statistics. In a recent convention of Veterans Treatment Courts, statistics were presented showing the recidivism rate of regular courts compared to treatment courts (including drug and veterans courts). In regular courts where only fines and jail time are given, 72 percent of convictees will reoffend within two years of sentencing. In all treatment courts (drug and veterans), just 25 percent of convictees will reoffend. In Veterans Treatment Courts, less than 10 percent reoffend.

In Havasu’s VTC, the recidivism rate is zero. Not one veteran who has graduated from the program has reoffended.

Kingman recently opened its own Mohave County Regional Veterans Treatment Court after Judge Jeffrey Singer convinced the Kingman City Council that it was needed. Singer had been visiting Judge Kalauli’s court to watch how it was handled, and he has had great praise for Havasu’s VTC. In previous statements, Singer often says, “Lake Havasu’s Veterans Treatment Court is the gold standard” and that he modeled Kingman’s VTC after Havasu’s.

Next: Part 2: THE SUPPORTERS OF VETERANS COURT