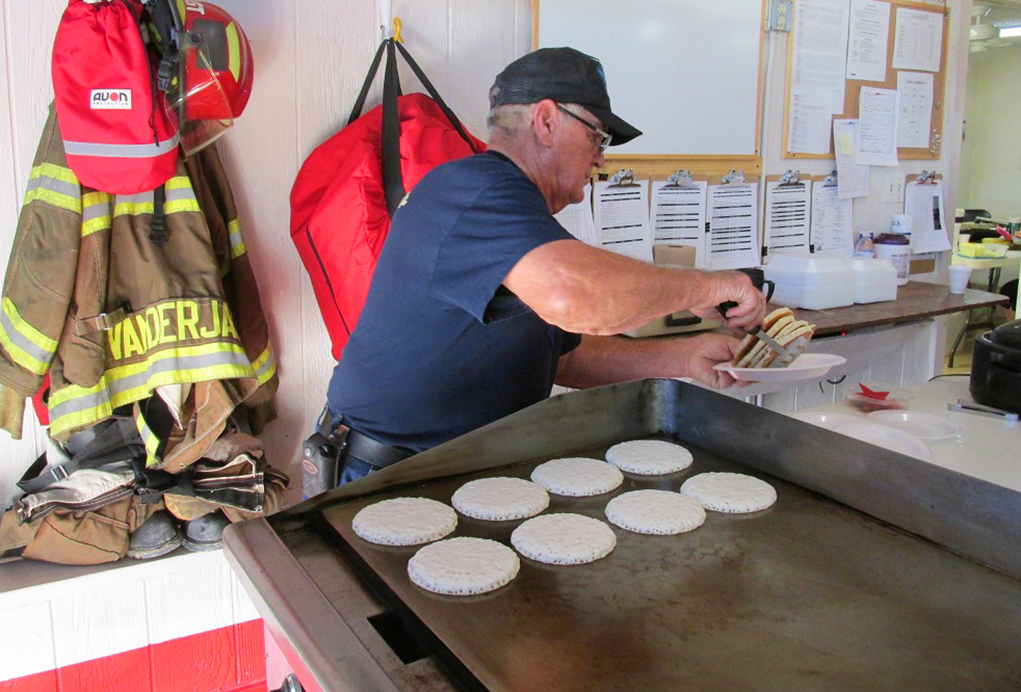 Desert Hills Fire Department Auxiliary celebrates 30 years of slinging pancakes Saturday with the kick off to its charity breakfast season.

“I can’t believe I’ve done this through the years,” said Dee Moscou, past president of the Auxiliary. Moscou joined the Auxiliary in April 1985, just one month after the group’s inaugural pancake breakfast in March 1985. Surprisingly, she eats no pancakes ─ not in 30 years of organizing community pancake breakfasts.

“I haven’t eaten pancakes since I was a child,” Moscou said, giggling. “They just don’t agree with me.”

The group hosts six breakfasts and two spaghetti dinners between the months of October and April each year. The effort supports the department when extra costs come up along the way.

The profits have turned into items for the department including a kitchen sink and faucet, a microwave, LED emergency light bars and safety chevrons for the trucks, and helped offset costs for a chainsaw and new fire hose.

“We have the new refrigerator and a new stove,” said DHFD Auxiliary president Hal Ries. “They both had quit working over the summer.”

On Saturday, Lake Havasu City residents Dick and Violet Sloan were first in line for the charity breakfast.

“I can hardly wait,” Dick said. “All through the summer I keep wondering when it’s going to start.”

Dick opted for the biscuits and gravy while Violet hung on for a half-order of pancakes. Coffee and juice included.

Both were wearing T-shirts promoting the DHFD pancake breakfast, a venture that’s proved profitable. Several other breakfast goers donned the shirts, too. Proceeds benefit the department.

“We always come early because it gets so busy,” Violet said.

The couple said they attend every monthly breakfast. They learned of the breakfast many years ago when their grandson Ryan Sloan worked as a DHFD firefighter. They’ve regularly attended since.

The Sloans also make their way to the firehouse for those occasions, too.

The Auxiliary consists of 28 members, and 15 volunteers, Ries said.