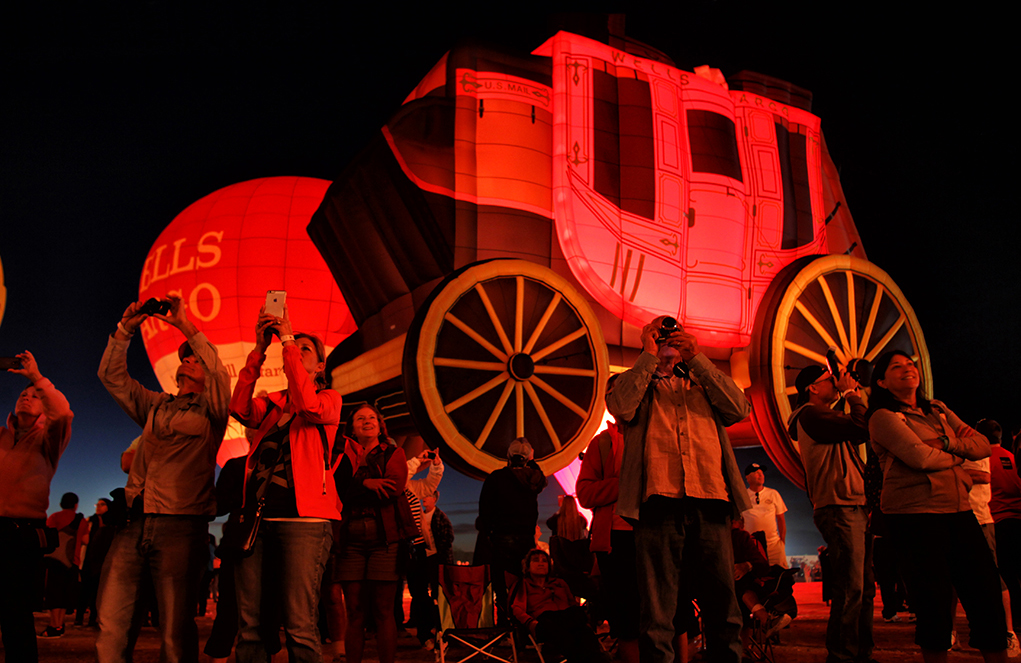 It’s the birds and the bees and the fishes in the sky that are part of the upcoming seventh annual Balloon Festival and Fair in Lake Havasu City.

“The three bees, they fly together and always are a big attention-getter,” said Becky Goldberg, who oversees the event’s flight ops and balloon pilots. “It’s a very cool sight to see when they’re in flight. They are individual balloons, but they are attached together.” 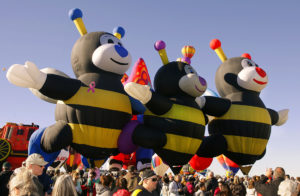 The three bees at the 2014 Albuquerque Balloon Festival. The bees will be appearing at the 2017 Havasu Balloon Fest. Jillian Danielson/RiverScene

The Love Birds, piloted by Maria Chieruzzi, of Simi Valley, Calif., is a brand-new balloon in October 2016. Havasu’s Balloon Fest will be its second appearance.

Gus the Guppy, piloted by Larry Konash, Prior Lake, Minn., is a first-time visit to the skies over Havasu. Other first-timers include Bimbo Bear, piloted by John Petrehn of Albuquerque, N.M.; and Pegleg Pete, piloted by Dave and Kathy, of Mahomet, Ill.

“We have a really great group of shapes,” Goldberg said. “We’re really lucky to get some of these big names here.”

Two of the dozen are returning from last year’s event and include the Wells Fargo Stagecoach, which is piloted by Don Boyer, of Belen N.M.; and the Fire Truck, piloted by Thomas Siebel, of Freudenberg, Germany. Siebel is the balloon pilot who has travelled the furthest to participate in this year’s event. 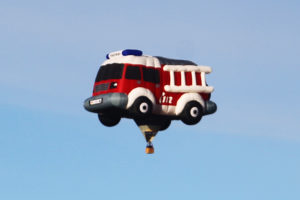 The fire truck during the 2016 Balloon Festival. Jillian Danielson/RiverScene

“The Fire Truck was extremely popular and we had the opportunity for it to come back,” Goldberg said. “It has been here the last three years so this will be his last year here. We try and rotate them out every two or three years before we bring somebody back.”

The other special-shape balloons are either new to the Balloon Fest or returning after hiatus. For example, Sushi, piloted by Katie Griggs, of Dayton, Nev., will be back this year after four years away.

The sponsorship of the special-shapes balloons is about $2,500 compared to the regular hot air balloon sponsorships, which range from $800 to $2,000. In all, there are 80 pilots on deck for this year’s Balloon Fest, Goldberg said.

Each year, proceeds of the event benefit a plethora of community nonprofit organizations in Havasu. 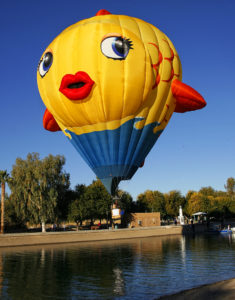 “With the Balloon Fest, you really love it and you’re in it, or you’re not,” she said. “I just fell in love with it. The pilots are the best people. They’re most welcoming, and are very smart people. I love the way they treat everyone. They love to share their love with ballooning with everyone. Anyone can go up to any of the baskets and the pilots will talk with them.”

The Havasu Balloon Fest is set for 6 a.m. to 9 p.m. Friday to Sunday, January 13-15, at Nautical Beachfront Resort Golf Course. With weather permitting, there will be morning and afternoon mass ascensions and night glows. Other activities include school displays, the vendor village, a carnival, tethered balloon rides, and live entertainment.

Admission is $15 for three-day pass. Youth 14 and younger admitted for free. For more information and a full schedule of events, visit www.havasuballoonfest.com. 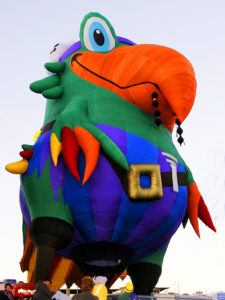 Pegleg Pete at the 2014 Albuquerque Balloon Fiesta. Pete will be appearing at the 2017 Havasu Balloon Fest. Jillian Danielson/RiverScene 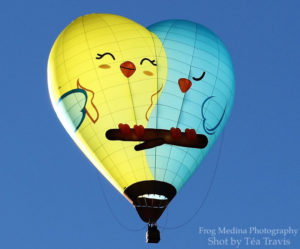