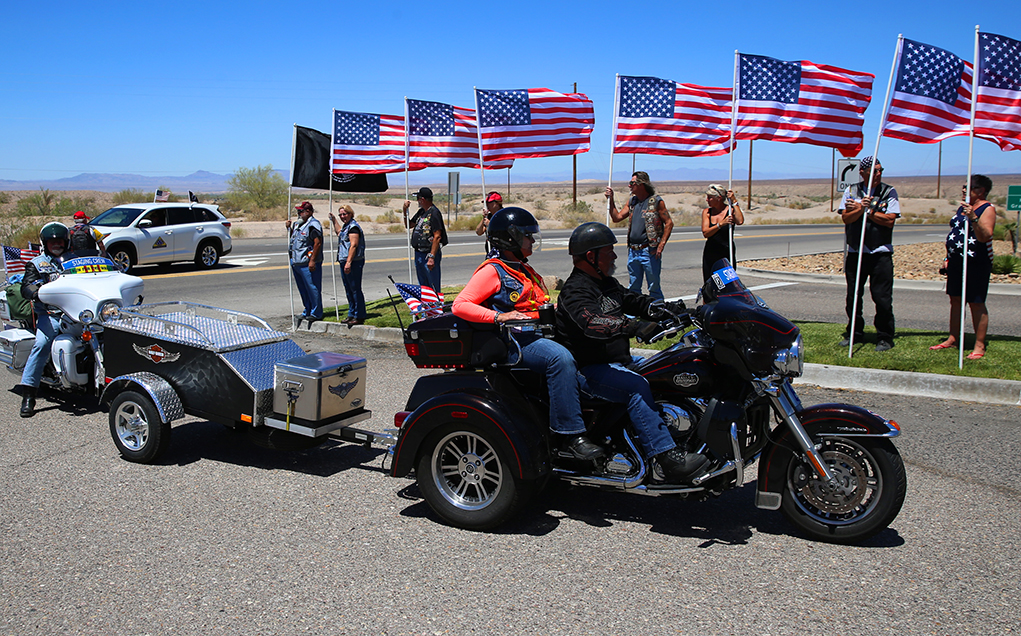 The message is, Freedom isn’t Free. And, so they ride, to honor and to heal. Two waves of Run For The Wall riders are set to thunder by on Interstate 40 Wednesday during the kick off of the 31st annual journey to The Vietnam Veterans Memorial Wall in Washington, D.C.

“It’s a happy time we are celebrating. We would love the public to join us to hold flags for the Run For The Wall riders. They can bring their own little flags or we will have some on hand,” Kohler said. 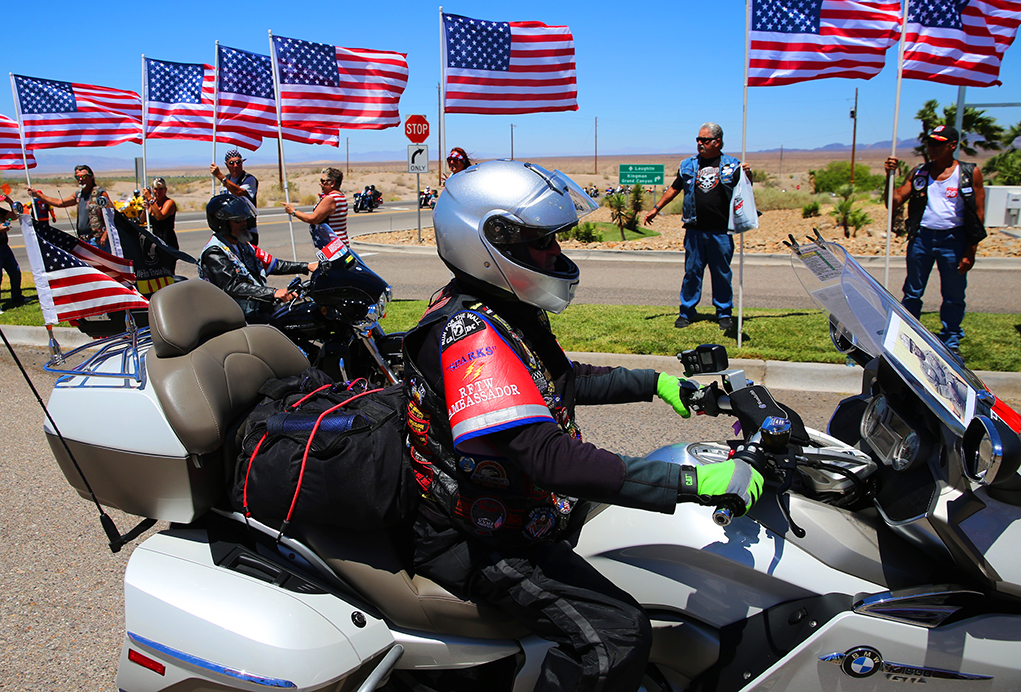 Kohler, who heads the local PGR efforts, said there are three staging areas, or opportunities, to greet and show support for the cross-country RFTW Midway Route riders on Wednesday.

The first is set for 11:30 a.m. Wednesday, May 15, at Gateway Drive and the storage units near Terrible’s Chevron.

Spectators are urged by PGR to please park at the PGR staging area and not at the Chevron itself, as hundreds of RFTW motorcyclists are expected there for their fuel stop. The flag-line welcoming the riders is on Gateway Drive. There are no spectators allowed on the I-40/State Route 95 interchange (exit 9) bridge again this year.

The RFTW Midway Route motorcyclists are set to arrive about noon that day for a fuel stop at Terrible’s Chevron near the Interstate 40/Arizona State Route 95 interchange before continuing on to a luncheon in their honor at 1 p.m. at Yucca Fire Department, in Yucca.

Yucca’s exit 25 from I-40, is the second staging area for the local PGR flag-line of supporters. Staging begins at 12:30 p.m. and flag holders are asked to park in the Yucca Fire Department parking lot. RFTW riders are expected about 1 p.m.

Roy Meek, Arizona State Coordinator for RFTW’s Midway Route, of Havasu, said he has ordered a 102-foot submarine sandwich, or 17 six-foot subs, to feed the expected 400 people coming through for the event. Chips, waters, sodas, 450 cookies, a 40-foot by 60-foot tent, and porta potties and hand wash stations also have been ordered for the day. 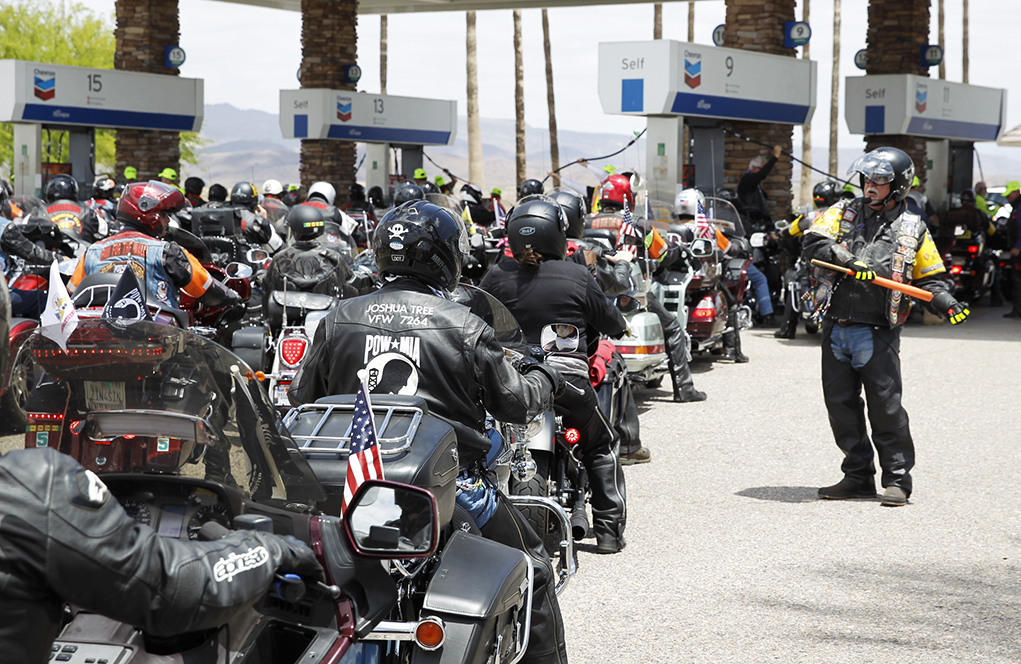 Major contributors to this year’s RFTW fuel stop and luncheon were noted as Military Moms of Lake Havasu, that donated $1,000, and chips, water, and sodas; Elks Lodge and the Elks Vagabonds RV Club donated $1,500; Havasu’s American Legion Post 81 donated $750; and Eagle Riders donated $500 among other donations from groups and individuals in the immediate area, Yucca and Kingman.

The RFTW Central Run riders are set to roll through on Interstate 40 at about 3 p.m. with no stop. Spectators are welcome to join the PGR flag line at the I-40 Franconia exit, which is exit 13, for the third and final PGR flag-line staging area for the day. Staging begins at 2:40 p.m. Again, there are no spectators allowed on the I-40/State Route 95 (exit 9) interchange bridge this year.

The RFTW Central Run stretch of ride from Needles, Calif., to Kingman, is dedicated to U.S. Army SSG Kenneth “Wade” Bennett, who was killed in action while deployed in Afghanistan on Nov. 10, 2010.

Audrey Mangan, RFTW participant, who lives in California, is set to ride from Needles to Kingman in the Missing Man Formation at the front of the RFTW Central Route with passenger Gold Star Mom Nancy Bennett, of Havasu. Mangan says along the way on each route, each leg of RFTW is dedicated to KIA and POW military service men and women. Each of these dedications centers on a name chalked on the ground and a few details of their life, service, and situation are discussed just before the group saddles up to ride out to the next stop.

“I am really honored that I get to do this,” said Gold Star Mother Nancy Bennett, “It’s so nice because it’s Mother’s Day.”

Bennett described her son Wade as an adventurous boy who grew into a true leader as a man. She described how the fall of the Twin Towers in New York, N.Y., during the 9/11 Attacks in 2001, really defined Wade’s fate toward the life of a military serviceman. 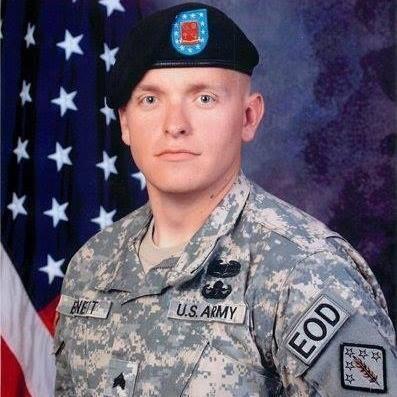 In the end, military officials who provided death notification for the Bennett family told them that Wade’s efforts and expertise “had saved many, many lives” before his demise, she said.

According to www.americanfallensoldiers.com, SSG Kenneth “Wade” Bennett, a bomb disposal expert supporting a Special Operations unit in Afghanistan, was killed after sustaining injuries during an attempt to defuse an improvised explosive device. It was during his third tour in that country. The Bennett family’s hometown is Glendora, Calif. 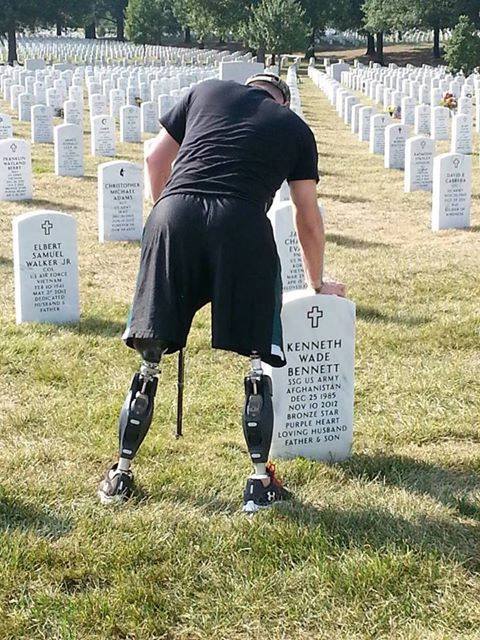 The Bennett’s story is a glimpse into the bitter-sweet honor of the many U.S. military service men and women who are remembered during this nationwide tribute that plays out each year during RFTW.

“It’s thrilling, too, because I haven’t ridden on a motorcycle in a lot of years and it is so exciting to be riding with this dedicated group of patriots,” Bennett said. “And, I know Wade is looking down on me saying ‘OK, Mom, go for it!’”

RFTW was founded in 1989 by Vietnam veterans as a way to recognize the sacrifices and contributions made by all U.S. military veterans who have served the nation.

RFTW itineraries posted online outline the mission as one of raising awareness for the 82,128 missing wartime Americans. Among them, with statistics last updated in late February of this year, there are 1,589 still unaccounted for from the Vietnam War.

There are 126 Cold War MIAs mostly in or near China. Another 7,665 American service members remain missing from the Korean War. Additionally, 72,742 are unaccounted for from World War II. 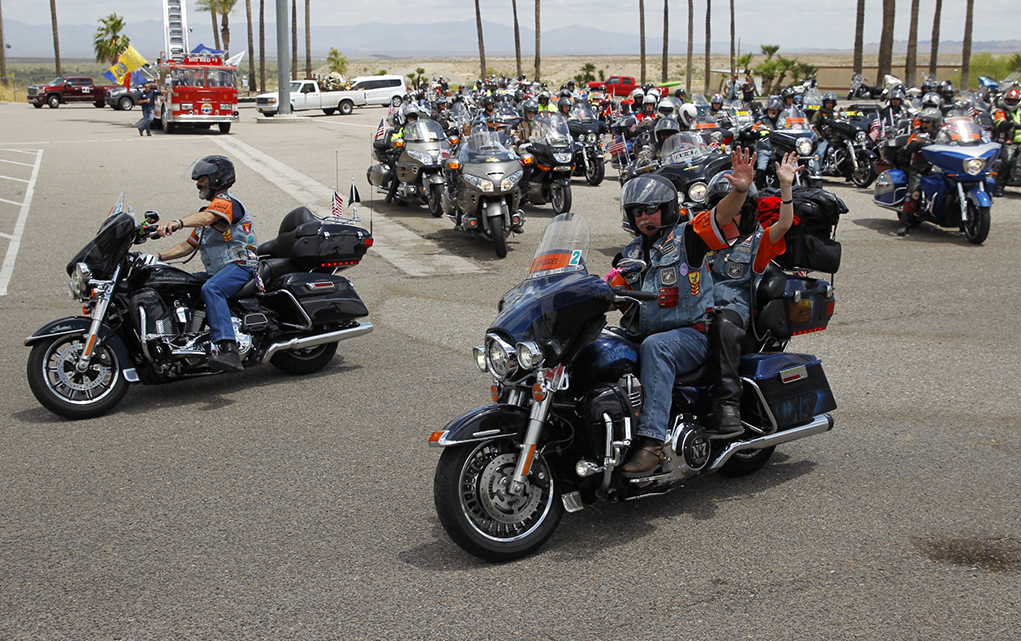 According to www.rftw.us, the 2019 RFTW mission is May 15-24, and encompasses a Central Route, Midway Route and Southern Route. The 10-day ride begins in Ontario, Calif., and leads to the Vietnam Veterans Memorial in Washington, D.C. Patriotic events round out the weekend into Memorial Day, Monday, May 27. The riders make their own way home.

RFTW participants are of all ages and include mothers, fathers, grandfathers, grandmothers; and U.S. military veterans from World War II, Korea, Vietnam, Desert Storm, Iraqi Freedom and Afghanistan; active-duty military men and women; and their supporters, friends and family.

RFTW’s Central Route riders depart Ontario, Calif., on Wednesday, and are set to travel through Arizona on I-40, New Mexico, Colorado, Kansas, Missouri, Illinois, Indiana, Kentucky, West Virginia, and are set to arrive in Washington, D.C., in the afternoon May 24. In all, the ride is 2,889 miles.

RFTW’s Midway Route riders depart Ontario, Calif., on Wednesday, and are set to travel through Arizona on I-40, New Mexico, Texas, Oklahoma, Arkansas, Tennessee, North Carolina, and Virginia. In all, the route is 2,995 miles.

RFTW’s Southern Route riders depart Ontario, Calif, on Wednesday, and are set to travel through Arizona on I-10, New Mexico, Texas, Louisiana, Mississippi, Tennessee, and Virginia. In all, the route is 2,957 miles. 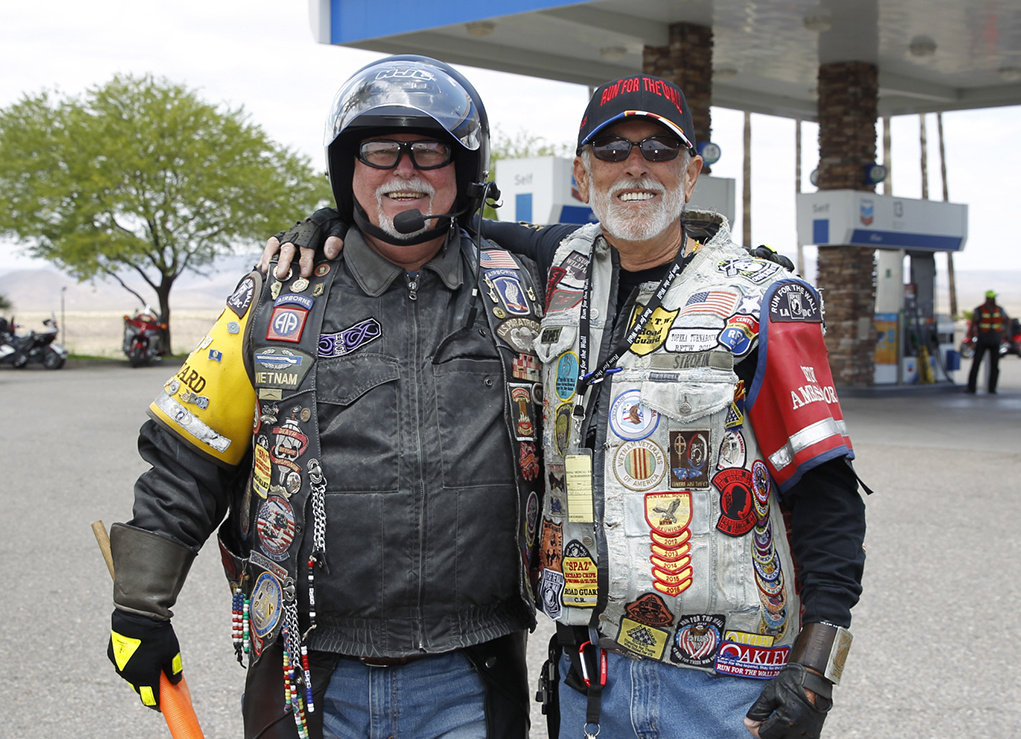 “Dirt” and “Peacemaker” pose for a photo at one of the fuel stops during RFTW. Jillian Danielson/RiverScene

Riders from all routes are set to meet on the steps on the Lincoln Memorial just before noon on May 25. They walk as a group to The Wall for a plaque demonstration.

According to pre-registration numbers provided by RFTW officials, keeping in mind some participants join at fuel stops along the way or travel only sections of the overall route, include 671 riders for the RFTW Central Route, 374 for the Midway Route, and 618 for the Southern Route. Often times, there are two registered riders aboard one motorcycle. Pre-registration prior May 1 was $30 per person, and is $50 along the way, the RFTW officials said.

On May 26, RFTW ride participants are welcomed to participate in the non-RFTW event, Rolling Thunder Parade that begins from the Pentagon, travels through downtown Washington, D.C., and arrives at The Wall. An estimated 350,000 motorcyclists are expected. 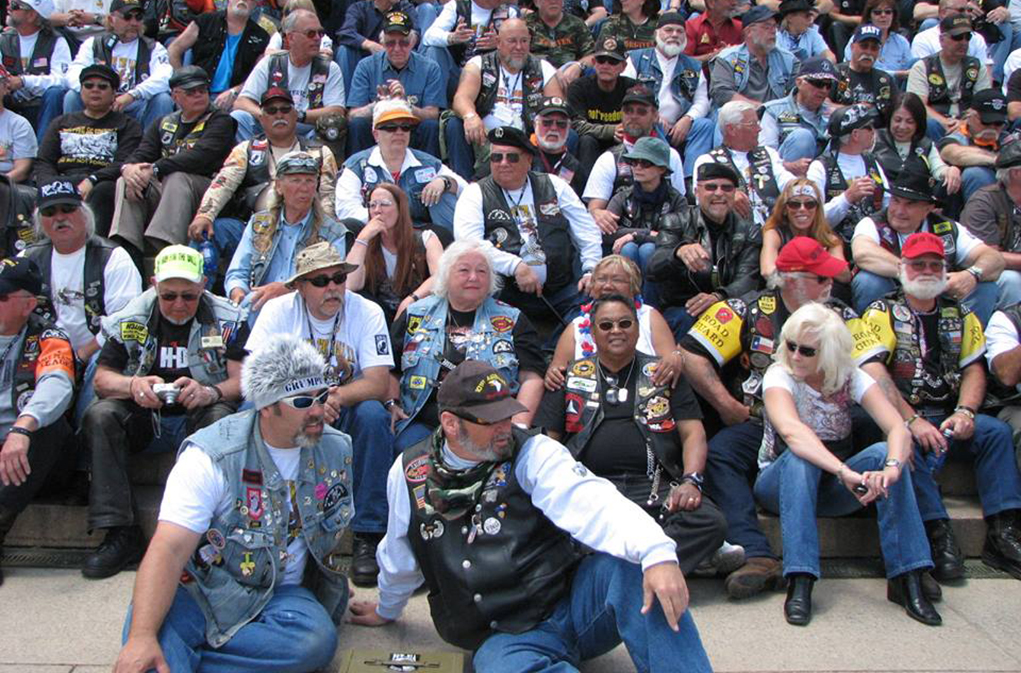 We dedicate this story in honor of RSM writer Judy Lacey, who was a Veterans’ supporter and a Run for the Wall participant.