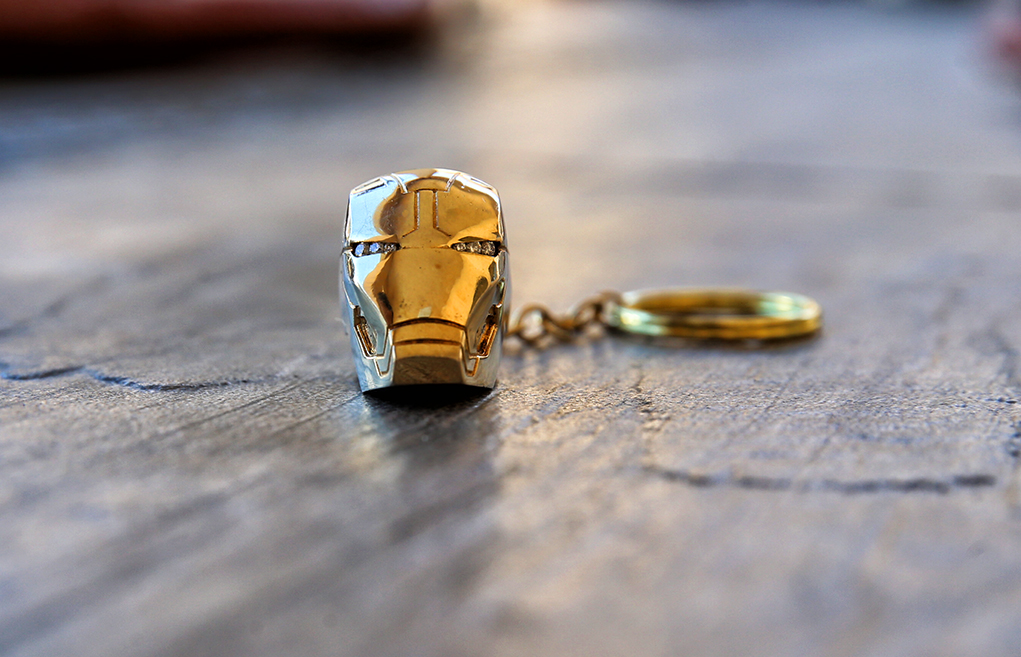 “The Avengers” was a blockbuster film that helped spawn a franchise that culminated in its final film, “Avengers: Endgame.”

“Avengers: Endgame” premiered last month and has appeased longtime fans while shattering box office records. These spectacles may be some of the most successful superhero movies ever made, but they wouldn’t exist without the film that launched the Marvel Cinematic Universe, “Iron Man.”

The first MCU film of its kind, “Iron Man” was a hit with fans and critics, reigniting the superhero genre and spawning a huge universe. The film, anchored by Robert Downey Jr’s charismatic performance, was also praised for its action. “Iron Man”  became the hallmark for all future Marvel films to strive for.

Schneider is a former stunt double trainer for many of the famous superhero films today. His work ranges from “Spiderman” to “Batman vs. Superman: Dawn of Justice,” and he has trained some of the most well-known stuntmen today. Riverscene Magazine spoke with this behind-the-scenes trainer. 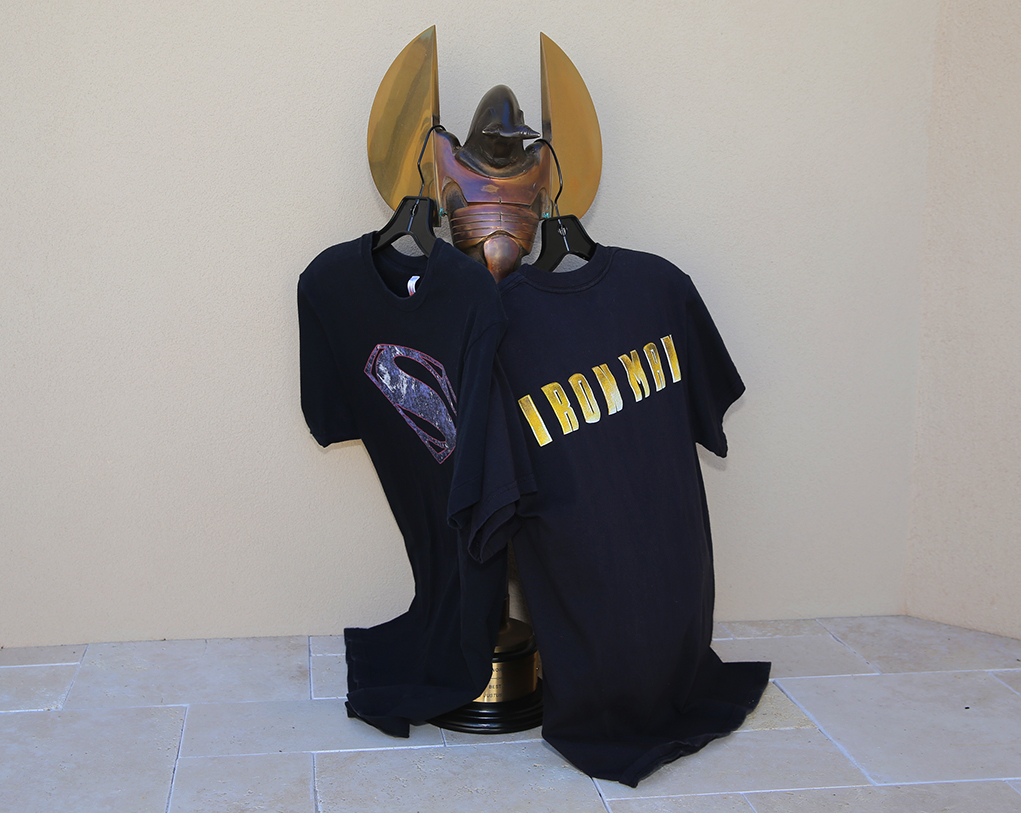 “It all started with my gym.”

Schneider, bright-eyed, insightful and energetic, talked about his past as a trainer and gym owner in Los Angeles. He came from a family of actors, and embraced health and fitness in his youth. He trained numerous celebrities and Hollywood executives in his health club.

“I was training high-end clients at my health club when this guy comes in at 4 in the morning asking me for help with his shoulder.”

Schneider laughs and said he told the guy to come back when the club opened at 5 a.m.

“He heard that I was good with shoulders and he promised to come back. Sure enough he came back the next day, and that was it.”

That man turned out to be acclaimed stuntman Mike Justus, who has become Schneider’s lifelong best friend. Schneider helped Justus with his shoulder and trained him to be “functionally strong”. Schneider’s expertise as a kick boxer helped Justus become an even better stuntman, and he soon became a staple in major Hollywood action movies. Justus brought Schneider on to help him train for films and coordinate stunts.

“I came in to make the actors look as real as possible,” Schneider said. “They already had their scenes but I was there to help polish it.”

Schneider started to work with Justus on major movies. One of the earliest films he could remember working on was “Spider-man” with Justus. From there, the duo worked on films such as “Man of Steel”, “Ironman” and more. Schneider’s training and  became more prominent behind the scenes because of Justus’s reputation as an amazing stuntman.

“Soon I started training other people because they wanted to look like Mike.”

Schneider started working with everyone, including training the stunt double for “Man of Steel”, and working on the stunts in the critically acclaimed “The Dark Knight”. He soon developed a deep relationship with Legendary Pictures, the production company behind many of the hit films Schneider worked on.

Schneider laughed at Justus over the phone. He called Justus during the interview for more insight into their early days together.

“’Iron Man’ was awesome because the director (Jon Favreau) just let us do what we wanted.” Schneider and Justus were crucial in creating one of the most iconic scenes in Marvel history: Tony Stark’s first suit. The famous scene entailed Tony Stark building the Iron Man suit for the first time and defeating the terrorists who held him captive.

“We had to make Robert (Downey Jr.) walk like Justus when he wore the suit.” Schneider essentially worked on the mannerisms for Iron Man, and coached Robert Downey Jr. how to act like Iron Man when Justus wasn’t in the suit. On top of that, Justus and Schneider helped create the scene.

“Robert … he was an amazing actor to work with. He really knew how to bring more to a scene.” 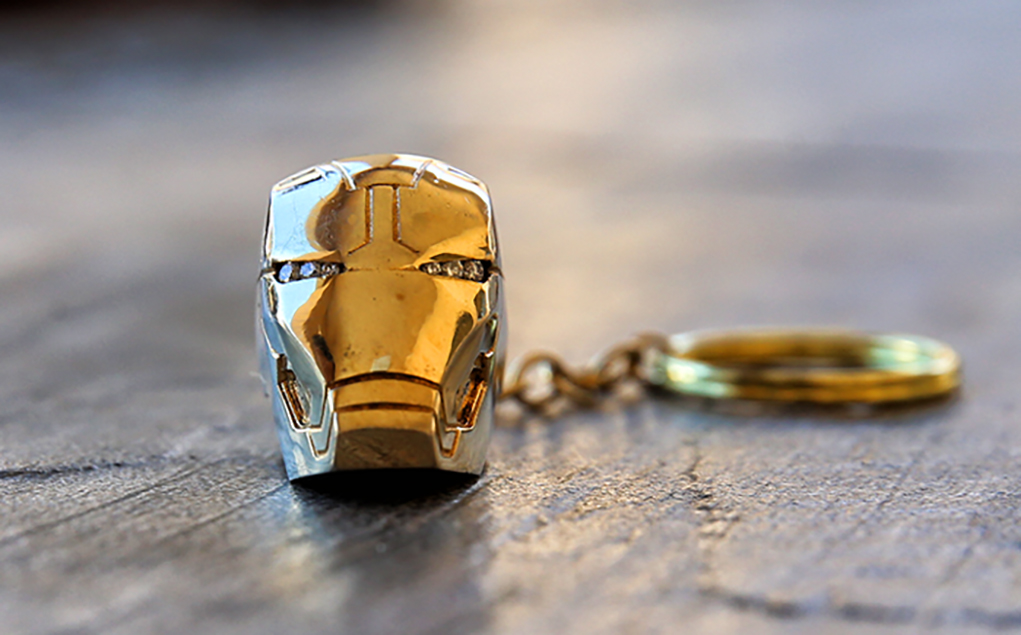 A keychain given to Schneider by Robert Downey, Jr. for his work on Iron Man. Jillian Danielson/RiverScene

After “Iron Man” wrapped, Robert Downey Jr. gave the crew (including Schneider) a mini Iron Man mask with diamond eyes on a keychain. Schneider and Justus said they loved working on “Iron Man”.

After the success of “Iron Man”, the duo continued work on blockbusters, including “Indiana Jones and the Crystal Skull”. Justus was the double for Indiana Jones – aka Harrison Ford. Schneider worked as trainer with the stuntman on this film.

“Harrison is tough. He’s willing to do anything.” 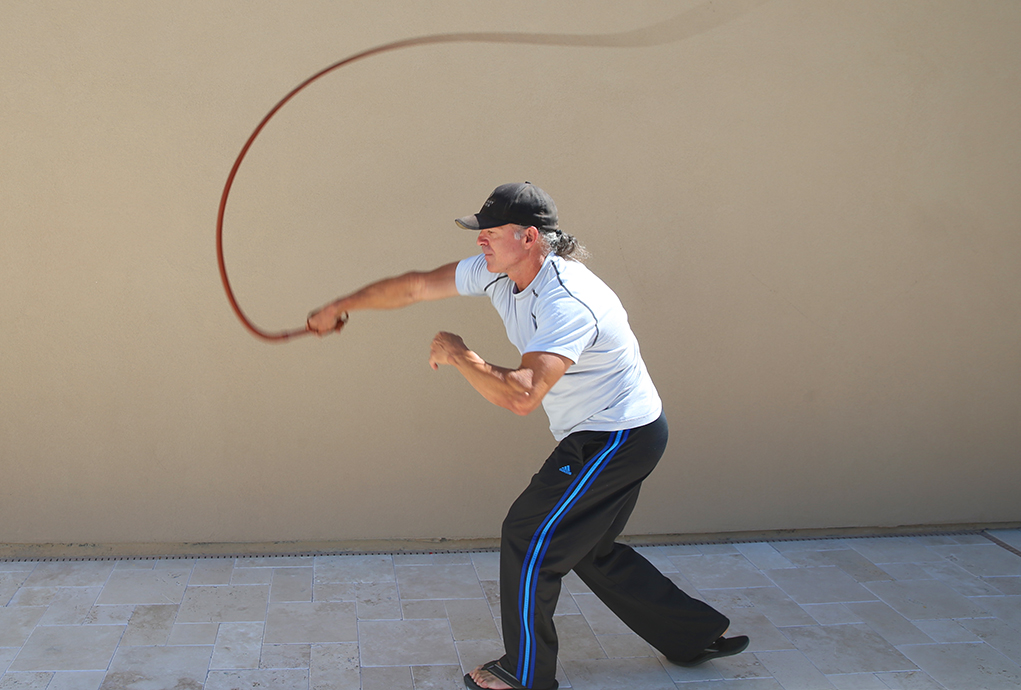 Schneider demonstrates how to use the Bull Whip that was screen used by Harrison Ford in “Indiana Jones and The Crystal Skull.” Jillian Danielson/RiverScene

The trainer took on more superheroes as the years went on. Schneider went on to train the stunt double for Superman in the “Man of Steel”. He said he worked with a different stuntman Wayne Daglish to make him Superman. Daglish, a stunt coordinator, was empowered by Justus during his training.  However, the studio and Schneider had to scramble to find a new double once Henry Cavill proved to be taller than Daglish.

With only a few months to go before filming, Schneider had to whip Darnell into shape. He was successful, and he worked with Darnell during the film as well. The stunt trainer returned for the film’s subsequent follow-up, “Batman vs. Superman”, in which he worked as the stunt trainer for the film’s spectacular scene where Batman takes on a warehouse full of bad guys.

“Zack Snyder is an amazing director,” Justus said via phone during the interview. Schneider agreed.

He also worked on the Batman stunt double for “The Dark Knight”, maintaining his relationship with Legendary pictures and Warner Bros. He crossed back into Marvel territory with his work on “The Avengers and Captain America: Civil War”.  In “Captain America”, he worked with stunt coordinator Mickey Giacomazzi, who coordinated the stunt work for “Captain America.”

He delved back into the DC film universe with working on “ Justice League.”  Throughout these Schneider continued to be the trainer in the films, working with both the actor and double to make things seem real. Schneider also worked to make the doubles and actors stay in sync, and stay safe.

“The stress comes with being careful,” Schneider said. His expertise soon paid off in stunt world, as he became known as the unknown guy who could train stunt doubles.

Schneider and Justus’s work on “Iron Man” led them to get a 2009 Taurus Award –  the annual stuntman awards started by the Red Bull energy drink CEO Dietrich Mateschitz. The awards are chosen every year, with fellow stuntmen and stunt coordinators voting for each winner. Justus and Schneider took home the Taurus award for “best fire” because of their work on the film’s most explosive action scene. 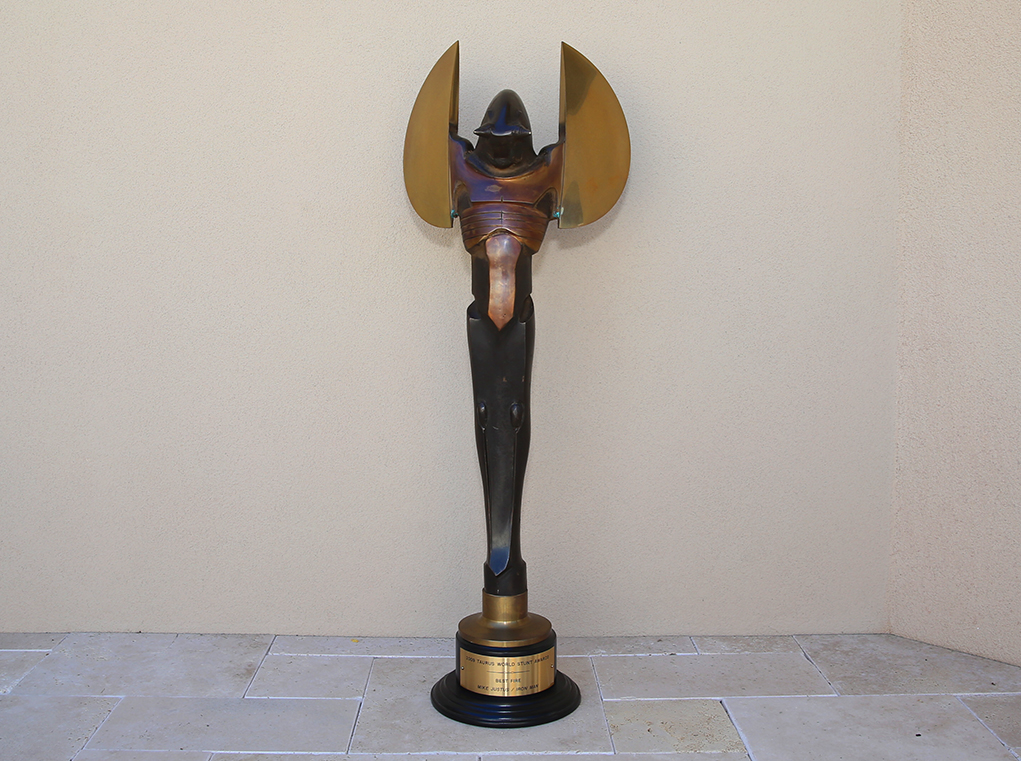 “I got used to being behind the scenes and not showing people up. I was just there to train these new actors and stunt doubles and get them where they needed to be look realistic.”

Schneider’s humility is something he says he learned from Justus.

“It’s not about showing people up, or upstaging people.”

Schneider maintains his quiet life and his humble status here in Lake Havasu City, despite having trained everyone from superheroes to adventurers.

It could be said that Schneider’s contributions to both the superhero and the action/adventure genre have left a legacy in Hollywood for many years to come. As someone who helped create some of the most explosive scenes in modern action cinema, he made the impossible, possible.

Watch for the next exclusive Hollywood stuntman interview with Mike Justus on Riverscene Magazine. 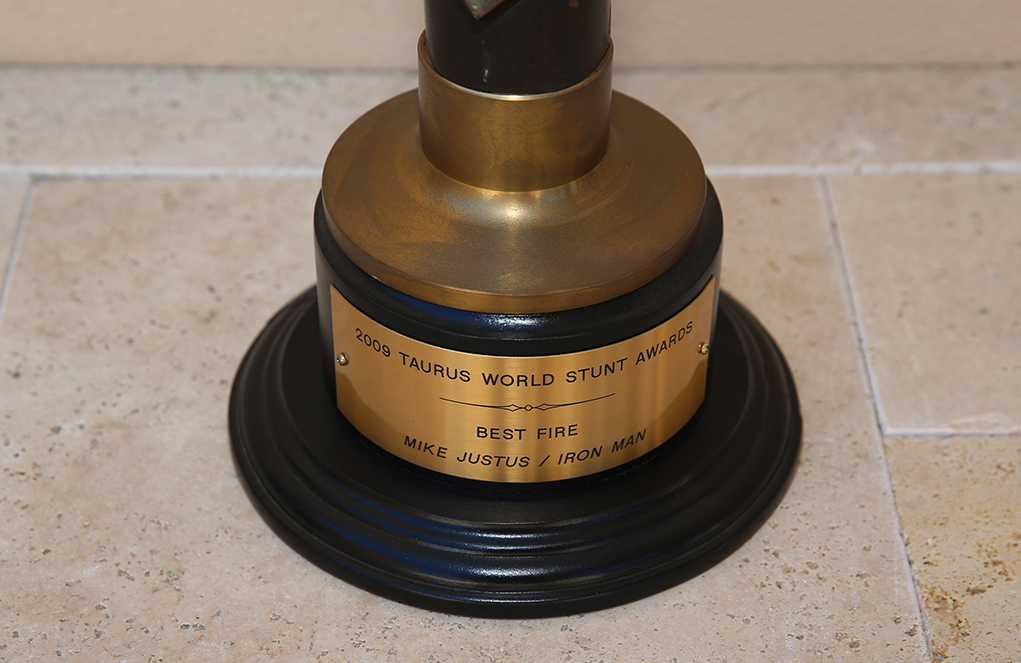 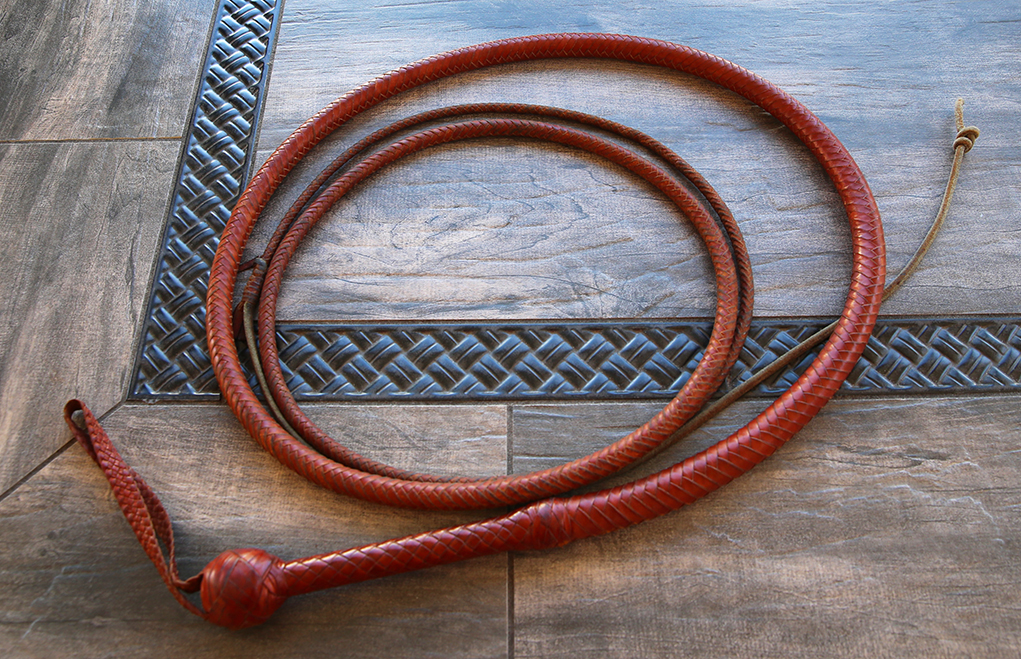 This whip from “Indiana Jones and the Crystal Skull.” Jillian Danielson/RiverScene