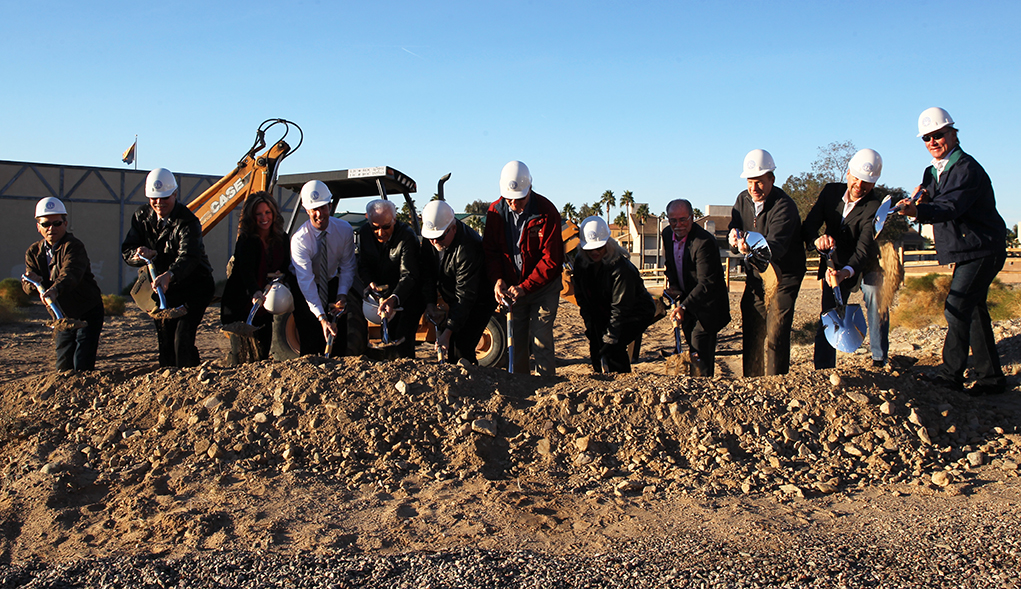 A groundbreaking ceremony took place this morning to kick off the planned English Village hotel project.

Representatives Bill Spresser and Bill Snyders, of Virtual Realty Enterprises, owners of the English Village property north of the London Bridge, along with Mayor Mark Nexsen, Vice Mayor Donna Brister, city council members Jenni Coke and Cal Sheehy, City Manager Charlie Cassens, CVB president Doug Traub, and other city officials gathered behind the English Village for the symbolic ceremony. With silver shovels in hand, they marked the beginning of the construction of a $20 million luxury hotel in Lake Havasu. 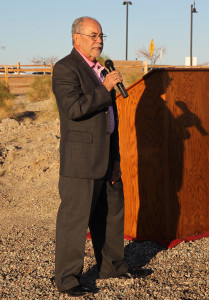 Mayor Nexsen spoke briefly, praising VRE for not just sitting on the property and allowing it to decay as previous owners had done, but for moving forward to help revitalize our city.

When VRE purchased the property in 2011, they cleaned it up, repaired the fountain, and allowed the Visitors Center to move from its old cramped quarters on site into the much larger original theater.

VRE announced plans in 2011 for three condo towers, but there was resistance to the height of the project. They lowered the height, but the project was eventually abandoned. When VRE recently put the property up for sale for $5.5 million, Havasu residents pleaded with the city to purchase it so the city could have control over what could be built in the English Village. However, VRE pulled it off the market and soon announced the hotel project.

At Tuesday’s meeting, Darin Sender, attorney for the Law Offices of Sender Associates of Tempe, welcomed those in attendance and briefly explained the proposed project, then turned the meeting over to Bill Spresser, Director of Hotel Operations for VRE, and Bill Snyders, Chief Operations Officer for VRE. 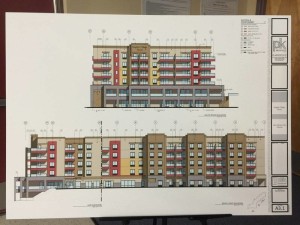 A drawing of the hotel is presented at the VRE meeting. Jillian Danielson/RiverScene

Spresser and Snyders explained that the new development will be a luxury hotel with 123 rooms, mostly suites. The suites will have kitchens, as they expect many guests to want extended stays of five days or more. A restaurant and a convenience store will be on the ground floor, and the two floors above that will contain 3,000 square feet of meeting rooms, and a 2,500-square-foot outdoor patio. They explained that the hotel and meeting rooms will encourage some large events to come to Havasu that haven’t come before because of the lack of hotel and meeting rooms. Also planned for the development is a pickle ball court.

Both men explained that the Visitors Center and surrounding structures will remain; only the original theater and candle shop will be torn down. The elaborate entry gates and fountain will remain.

The audience asked many questions about the project.

In response to a question about adequate parking for guests and event-goers, Snyders said that the city requires a certain number of parking spaces, and the development will have more than the required number. He also answered concerns about the height of the hotel by stressing that the structure will be 32.57 feet lower than the three eight-story condo towers proposed in 2011. At that time, in addition to the 200 condos, 24 town houses were also planned, along with 142 new boat slips. Spresser said the marina will be scaled back and the seawall will not be cut back 15 feet as proposed in 2011.

Answering a question from the audience, Spresser said that VRE is still committed to remove the engraved bricks in the Memorial Walkway along the Channel, store them, and replace them when construction is complete. They will install better lighting in the parking lot, as well as along the Bridgewater Channel.

An audience member asked if VRE could make the hotel design a little more “English,” as the structure appears modern and bland. Snyders answered that the hotel will be “softer” than it appears in the current rendering because there are numerous pop-outs and color variations. They may also install awnings. 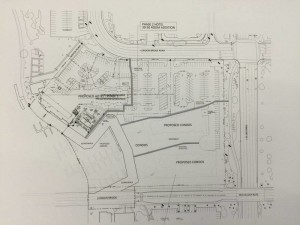 A drawing of the future of the new hotel is presented at the VRE meeting Tuesday evening. Jillian Danielson/RiverScene

Several audience members said many Havasu residents are reluctant to let go of the English Village theme and are hoping VRE will listen and modify the hotel design to blend in a little more with the London Bridge. One resident said he has lived in Havasu for 50 years and worked on the Village and that contrary to what many residents think, the shops were not flimsy but very well built. He said he understands why people want to see the English Village theme to remain, and asked VRE to do what the people want and retain the feel of the English Village, with events and concerts.

Several times during the meeting Spresser and Snyders stressed that VRE has a very strong commitment to the people of Havasu and the English Village and making it something that Havasu can be very proud of.

When an audience member lauded VRE for doing a good job of cleaning up the property and maintaining it in good condition, the entire audience applauded.

But when a resident asked what VRE plans to do with the remainder of their property, and Snyders responded that the second phase of the project, which is zoned for condos, is at least two years in the future, another resident said it appears to him that VRE is setting the project up for timeshares. Spresser emphatically denied it. Snyders said the chances of condos being build there are “very slim,” although he conceded that they could be built some day.

The hotel is expected to be completed in the second quarter of 2017. Spresser and Snyders were unable to commit to the hotel being a Hilton, Marriot, or other big-name hotel, but assured the audience that it will be a name everyone will recognize.

One Response to “Groundbreaking For English Village Hotel”