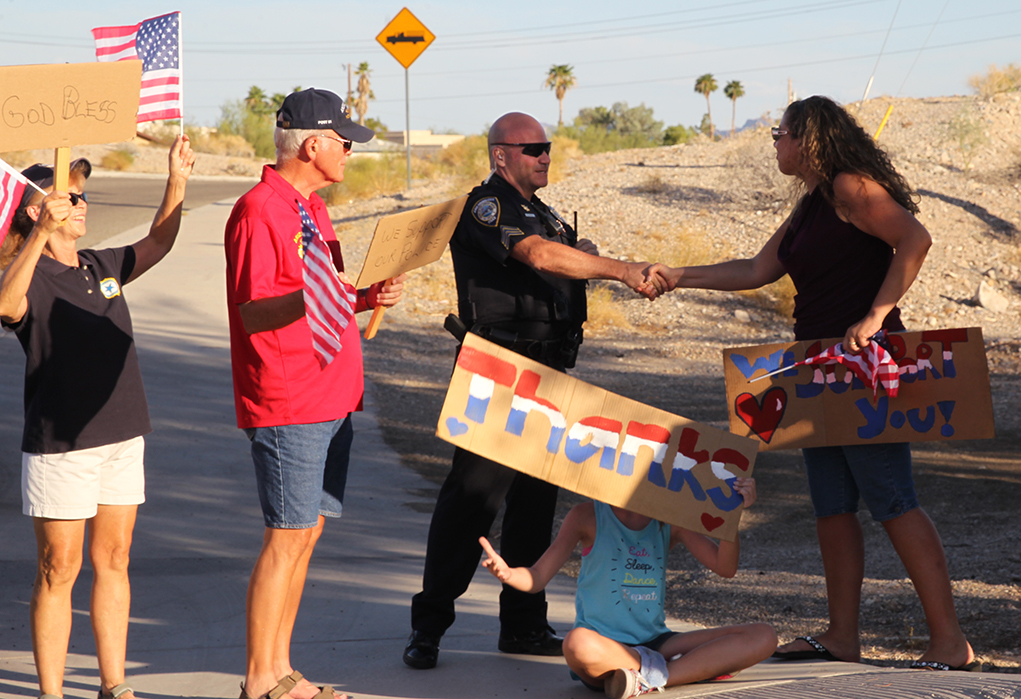 A group of Lake Havasu residents gathered outside the Lake Havasu City Police Department on Monday about 6 p.m. to show their appreciation of and support for our local police officers. 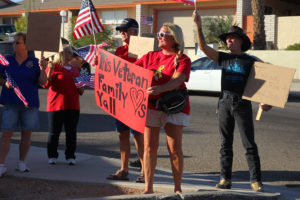 Holding American flags and signs on which were written “Thank you for protecting us,” and “We support you,” the group of about 20 stood outside the driveway to the police department parking lot on Inlet Drive to catch the officers going on duty and off duty for the day.

The gathering was inspired by Vietnam veteran Eddie Dunn, who lives across the street from the police department and stands on his balcony next to his large American flag every day to render a salute to officers as they change shifts. Dunn was among those gathered on Monday, and was pleased to see people come out to show their support for our police. 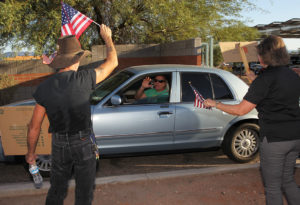 Eddie Dunn and Joan McDermott wave to an officer as he leaves the police department Monday evening. Jillian Danielson/RiverScene

“With everything going on in our country right now,” Dunn said, “we have to let our police know that we appreciate what they do for us every day.”

Lydia Shelton shared with the group an idea she had to show support for our local police.

“We need to show them that they are loved and we do trust them and support them and rely on them to take care of us and our cities, large and small, and that we have their backs and care about them. Bake a cake, make some homemade cookies, a fruit and cheese platter—something nice from your hands … and take it over to your local precinct or sheriff’s office. Add a note that says something like. ‘You are loved’ or ‘Your life matters.’”

Cars driving by honked and waved at the display of so many American flags. Police Sgt. Jerry Burns came out to thank everyone for their show of support.

Local resident and Military Mom Corbi Wright was at the gathering with husband David and son Tristan, 11 years old. Corbi had this to say: “It was our pleasure to come out and show our support for these fine men and women of the Lake Havasu City Police Department, who go out every day to keep our city and our families safe and keep Havasu such an amazing place to live!”

Lake Havasu City Police Department Detention Officer Christian Anutta expressed his appreciation of the show of support by posting a message on River Scene Magazine’s Facebook page: “Thank you for that!! It was amazing to see all those people out to support the PD. Absolutely amazing. Thank you to everyone who came out. You have no idea how much this means to everyone.” 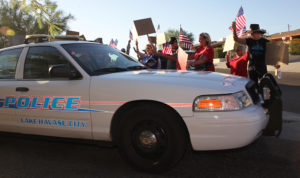 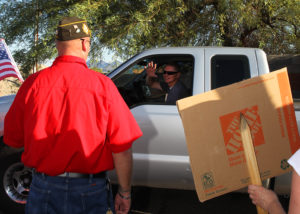 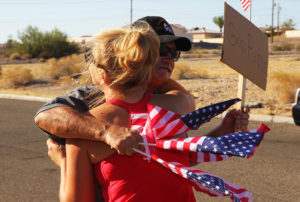 Randi Schneider, whose son’s dad is a police officer , hugs Stan Elliott as a thank you for supporting the LHPD. Jillian Danielson/RiverScene 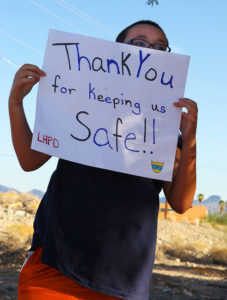 Feature Photo:  Sgt. Jerry Burns thanks (L-R) Judy and Will Harvey and Leslie Chinn for showing coming out to support for the Police Department