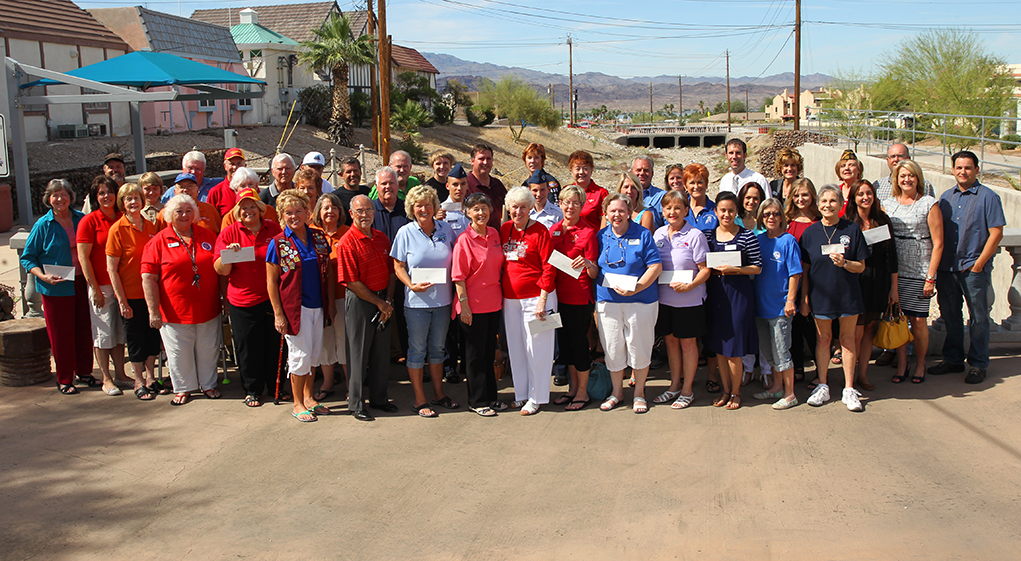 More than fifty local nonprofits received a boost this morning from the Lake Havasu City Balloonfest organizers, who distributed the profits from the January Balloonfest to the group gathered at Pima Wash for the ceremony.

The $133,000 that was distributed was raised during this year’s Balloon Festival in January. Seventy-eight hot air balloons from around the world participated.

“We are so happy to be able to put on a family fun event that reaps the benefits of giving back,” said Marquita McKnight, co-Executive Director of the Balloon Festival. “Through all five service clubs, we’re able to give back to deserving organizations within our community that do great things for the citizens of Lake Havasu City!”

The student scholorship winner of the Balloon Festival calendar contest, Wesley Smythe, was also on hand to receive his scholarship prize. Aaron Bachler was the winner in the amateur category, and Cool Photography was the professional winner. The public fan winner in the student contest is Nicole Oswald.

“It is an honor for Lake Havasu Rotary Club members to join with other Rotary and Lions Clubs to help produce the Lake Havasu Balloon Festival,” said Cal Sheehy, President of Lake Havasu Rotary. “We appreciate the support of the thousands of volunteers and spectators that make the event so successful.”

The 6th Annual Balloon Festival and Fair is scheduled for January 15-17 at the Nautical Beachfront Resort Golf Course.