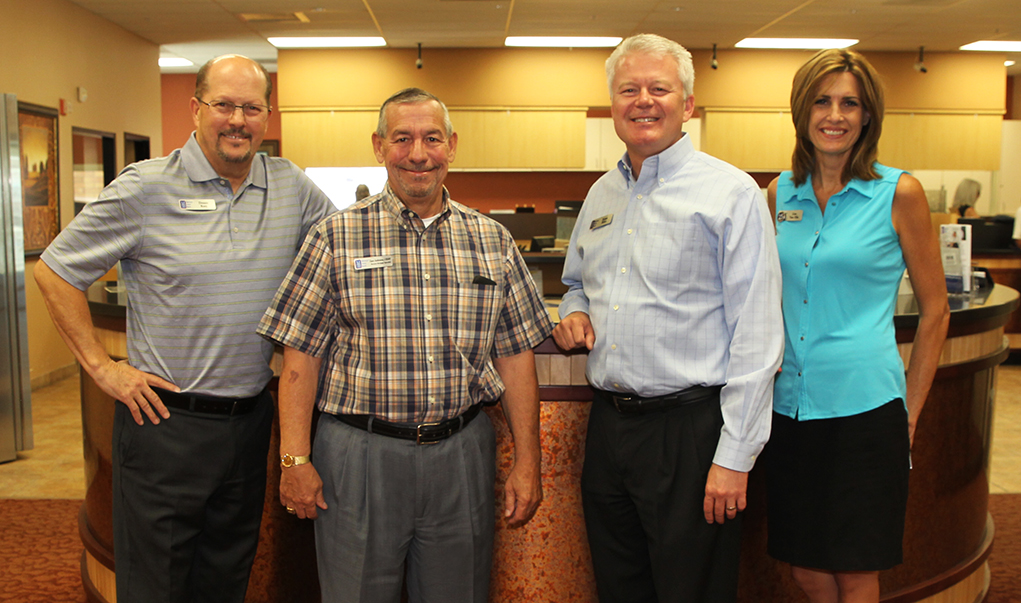 Mohave State Bank doles out about $100,000 and countless volunteer hours to 15 nonprofits and eight charity-fundraiser events each year in Lake Havasu City.

“We have a luncheon each year in the fall to collect donations for homeless in the schools,” said 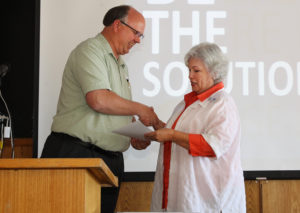 Volunteers were honored at the United Way luncheon. Jillian Danielson/RiverScene

Lyn Demaret, president/CEO of River Cities United Way. “Mohave State Bank opted to give us money to fill in the gaps.”

The luncheon boosts the nonprofit’s Kids Bright & Healthy program that provides for students in need of items such as shampoo, soap, deodorant and conditioner. The bank donated $250 for items outside of what is collected each year at the luncheon.

“They are very supportive of the community,” said Jeanie Morgan, president of Havasu Community Health Foundation. “I was really happy to see them step up and help out with the World Elder Abuse Awareness Day as a first-time event sponsor for $100. Every little bit helps.” 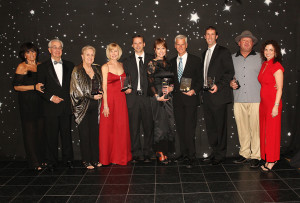 Awards were given out at the Cancer Ball. Jillian Danielson/RiverScene

The bank also supports the annual Cancer Ball, a black-tie event organized by HCH’s Cancer Association. It raises awareness and money for individuals in need in Havasu.

“We’ve always been a Cancer Ball sponsor,” said Lisa Van Ella, vice-president and branch manager of the bank’s Lake Havasu North location. “I’ve been with the bank for 19 years and we’ve sponsored a table for it every year. We always believe in giving back to the community.”

It’s the smaller organizations and little benefits in the city that Van Ella likes to focus on, too. 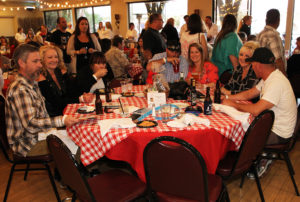 A group enjoys spaghetti at the Cooking With Cancer benefit. Jillian Danielson/RiverScene

“We are the people you see in the grocery store, and our kids are in the schools,” she said. “We are much engrained and we really develop a relationship with the community … it’s the best part of what I do.”

Cooking with Cancer is an example of a smaller, grassroots charity event the bank supports. The event is organized by Lisa Turner in memory of her daughter Heidi Edwards. Edwards originally hosted the event but succumbed to cancer in 2012.

“She put this together for other families, and my family and I kept it going,” Turner said. “It’s a good thing.”

The event, in its fifth year, happens in late February and raises money benefitting six or seven families per year who face a cancer crisis. The funds help pay for things beyond insurance coverage. 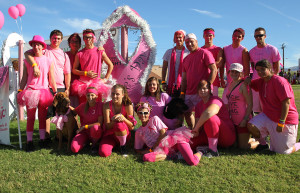 Denise’s Day is another cancer-awareness event the bank spotlights.

“They donate money to help us pay for the Pearl Bailey stage that we put at the park,” said event president and coordinator Heather Courneva. Last year, about 400 turned out to hear the five bands during the benefit concert in March.

Denise’s Day also hosts a cancer walk in early October. The charity recently purchased a 24-foot box truck and painted in hot pink. Businesses were approached to sponsor their own logos on the truck; Mohave State Bank’s logo is set to be among them.

Other contributions to Havasu events include a $500 sponsorship to New Horizons Bass Tournament; a $500 quarter page ad in the Desert Storm event guide; and a $2,000 donation that covers the parking lot shuttle for Delbert Days Rodeo. 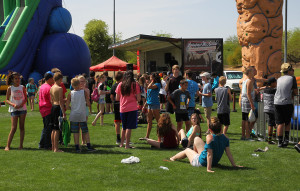 Students line up for rides at Teen Break. Jillian Danielson/RiverScene

The event is for grades six-12 and features three days of activities such as carnival rides, games, bungee jumping, rock-wall climbing and ice cream in Rotary Community Park.

The bank’s involvement with the K-12 Foundation’s Academic Recognition Dinner, Taste of Havasu, Car Door Show, Elementary Math and Science Olympics, and a Teacher Appreciation Dinner helps meet the needs within school when it comes to art and music programs, or math and science tutoring opportunities, or academic-program needs for teachers. All are beyond the reach of school budgets.

The annual Academic Recognition Dinner recognizes 20 of the top-ranked graduating students. In turn, each honors a teacher that motivated or inspired them. The event alone draws a $1,000 sponsorship from the bank. 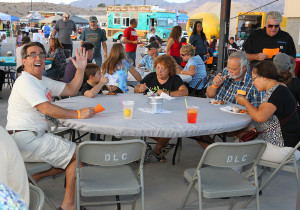 Guests attend the Taste of Havasu which benefits the K-12 Foundation. Jillian Danielson/RiverScene

Aside from the dinner and other events, Mohave State Bank turned up the volume this year with a $2,000 corporate-member sponsorship when it comes to the K-12 Foundation. They’ve challenged other businesses in town to follow suit.

“I just want to state that the K-12 Foundation raises $30,000 per year for schools through a combination of events and fundraisers and not solely from the Academic Recognition Dinner,” said Monica Hall, Mohave State Bank senior vice-president and K-12 board member.

“The more money we can raise, the more we can help the school districts,” Hall said.

Hall volunteered for the first time to help with set up last September when the K-12 Foundation hosted its Teacher Appreciation event. In November, she went on to become a K-12 board member.