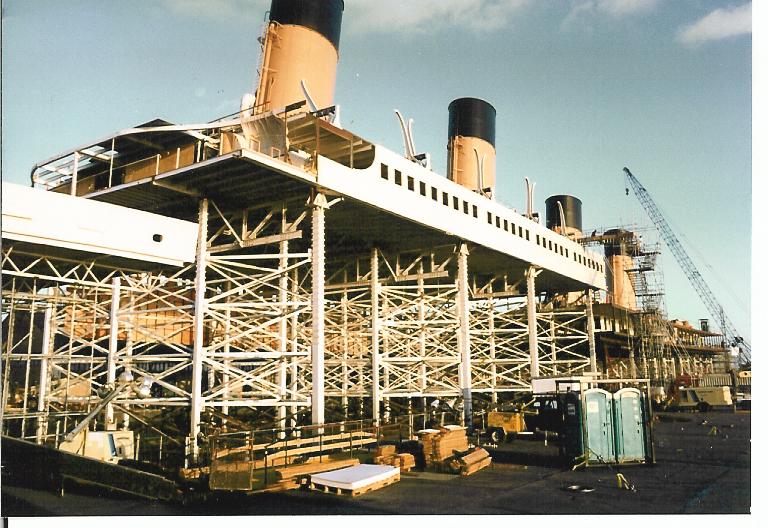 There are stories that circulate about all the Hollywood movie stars and celebrities who have visited or live in Lake Havasu City.

But there are those who are not recognized as celebrities or movie stars who make the stars and their movies who and what they are. They are the people behind the scenes who make everything work.

When movie goers are seated in the darkened theater, thoughts of how it all happens are far away. It’s the magic and the effects blended perfectly that make a great story.

Creative artists make it work from the fantastic effects they create and the wonders they bring to the big screen.

Some of those creative masters make Lake Havasu City home and are sharing their stories with RiverScene Magazine.

From “E.T.” to the “Fast and Furious” series to “Into the Blue” to “Life of Pi” to “Benjamin Button” – to name just a few. And this is just a sampling of their movie resume. 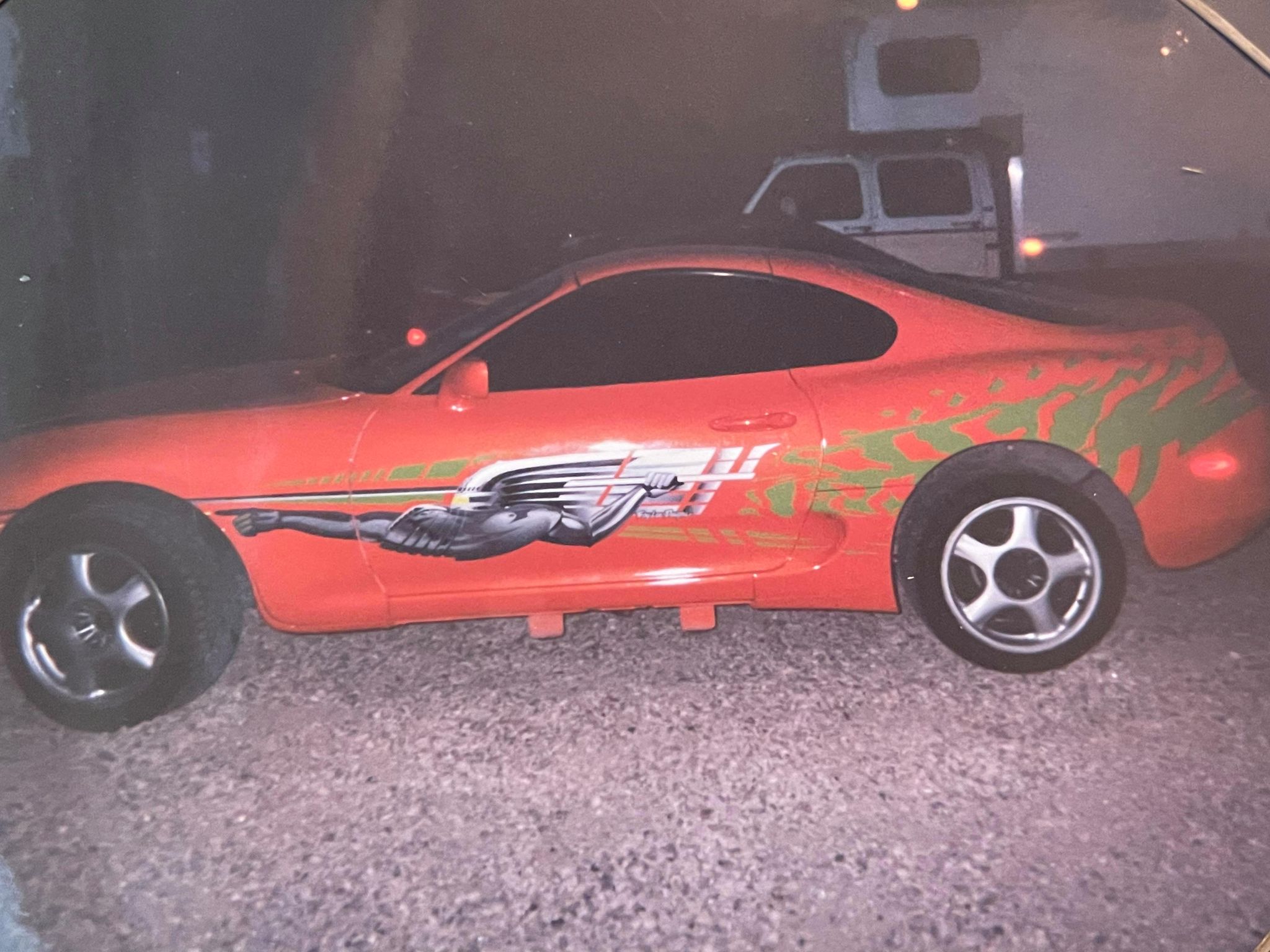 A photo taken by Andy Miller of Paul Walker’s car in the “Fast and the Furious” that he had worked on for  filming. photo courtesy Andy miller 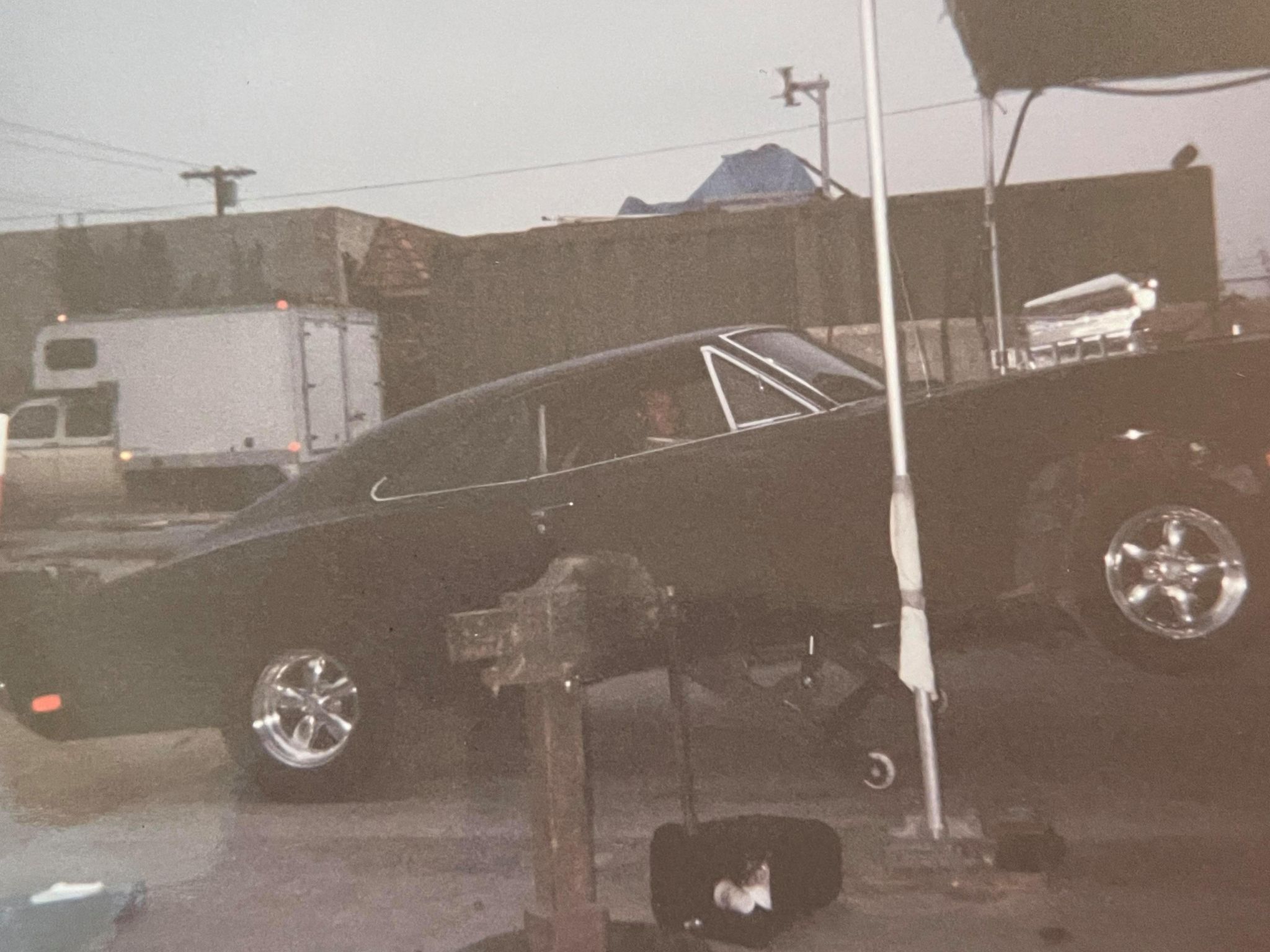 A photo taken by Andy Miller of Vin Diesel’s car in the “Fast and the Furious.” Miller built the hydraulics for the car chase scenes.

TV offerings like “CHiPs” and “Hunter” and so much more are a part of  the rich careers of these artists.

Andy and Toni Miller retired to Lake Havasu City in 2014.

The couple had been in Texas working on the movie “Grindhouse” when a shop they were renting in California sold and Andy’s sister suggested they hang out at her vacation home in Lake Havasu City. They bought a house in Havasu in 2006-07, to which they retired about seven years later.

But their road to Lake Havasu City is one filled with a lot of hard work and a lot of magic.

Andy grew up around the construction industry in Southern California and had an uncle who was a talent agent.

“I think my father got involved in the movie industry with him in the early ‘70s,” Andy said.

His father worked with a set decorator and eventually became the prop master for the “Patty Duke” and “F.B.I.” TV series and asked him if he’d like to get into the studios.

“To make a long story short, I ended up at Disney in 1974 working on “The Apple Dumpling Gang” as a carpenter – which I didn’t like, so I soon left and went to MGM in the blacksmith shop,” he said.

He then left and went to Universal Studios and worked on “In God We Trust” and then back to MGM.

Andy, along with his friend Dale Martin were working together on the TV series “CHiPs” when they had an opportunity to do the movie “The Hand” with Italian special effects specialist Carlo Rambaldi.

Another friend, Steve Townsend, who was a machinist working full time for Rambaldi informed Andy and Dale about a new Steven Spielberg move – “A Boy’s Life.”

“I went to Dale and said, ‘There’s an opportunity to leave TV and work on feature films and we’ve been invited to do an interview for this film called “A Boy’s Life,’” Andy said. The pair got the job, and the work began. 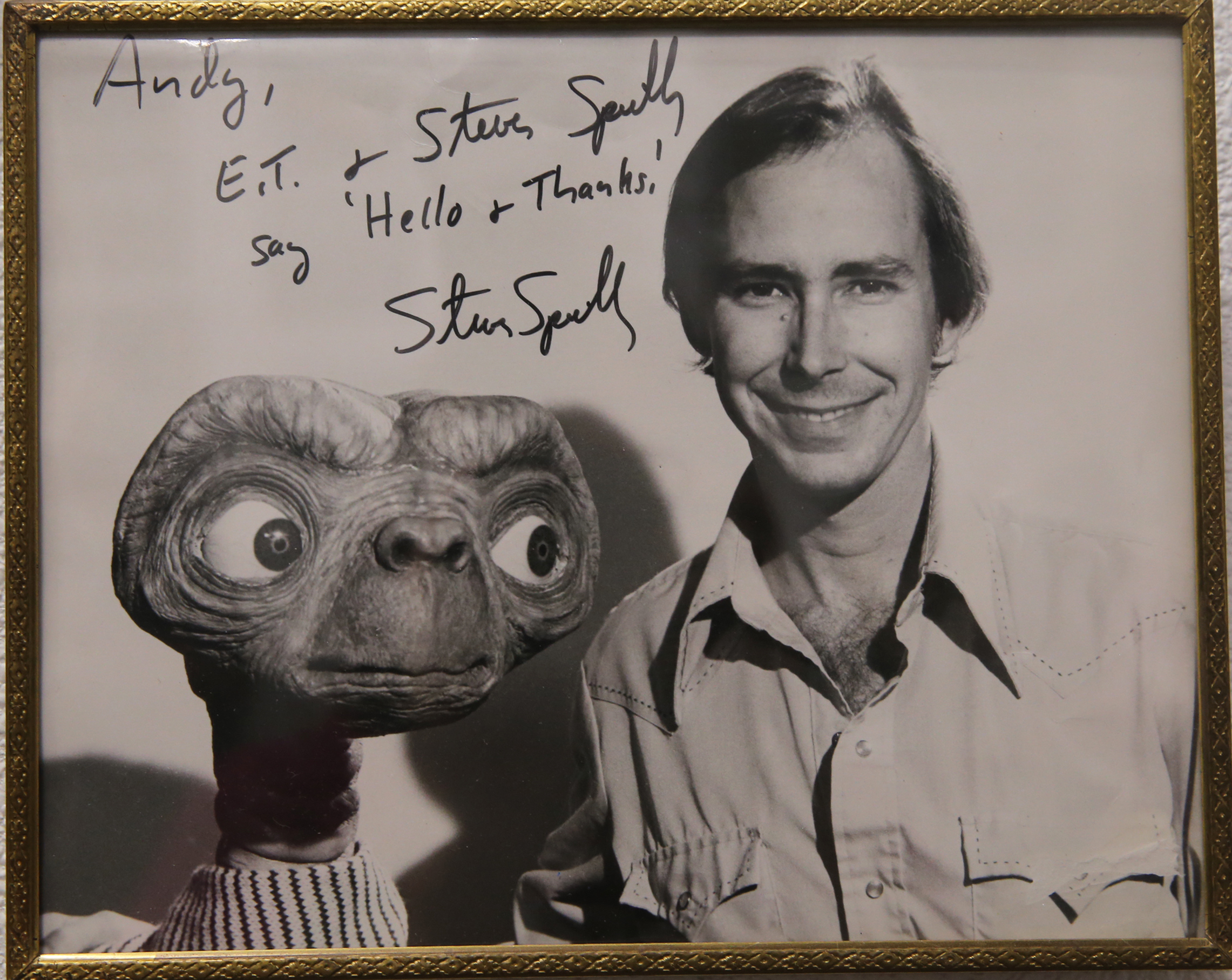 Andy Miller poses with “E.T.” in a photo. The photo was then signed by Steven Speilberg. photo courtesy Andy Miller

“A Boy’s Life” was the original title of “E.T. the Extra Terrestrial.” And, Andy added, E.T. was also the initials of the 10-year-old boy Elliott Taylor, who finds the extra-terrestrial.

Rambaldi designed all the animatronics for E.T. and Andy was part of his crew.

Following “E.T.”, Andy left the business for a while. He opened a company in North Hollywood – Miller’s Manufacturing. The company was awarded a contract for roll cages for several TV series including “Hunter”, “Hardcastle and McCormick”, Andy said, but he wasn’t making much money, so after six years, got another offer that brought him back to mainstream movie making that continued for his 40-year career.

“They decided to do ‘The Blob’ in Louisiana and Griffith Park (Los Angeles, Calif.) and I went ahead and jumped on that, and it reignited my career in the movie business,” he said.

Eventually, Andy made a phone call to Jack Rubin and Sons rigging company to order some supplies for a project when he was greeted by the voice of his future wife, Toni.

Toni was the manager of the company and was taken by Andy’s voice on the phone. 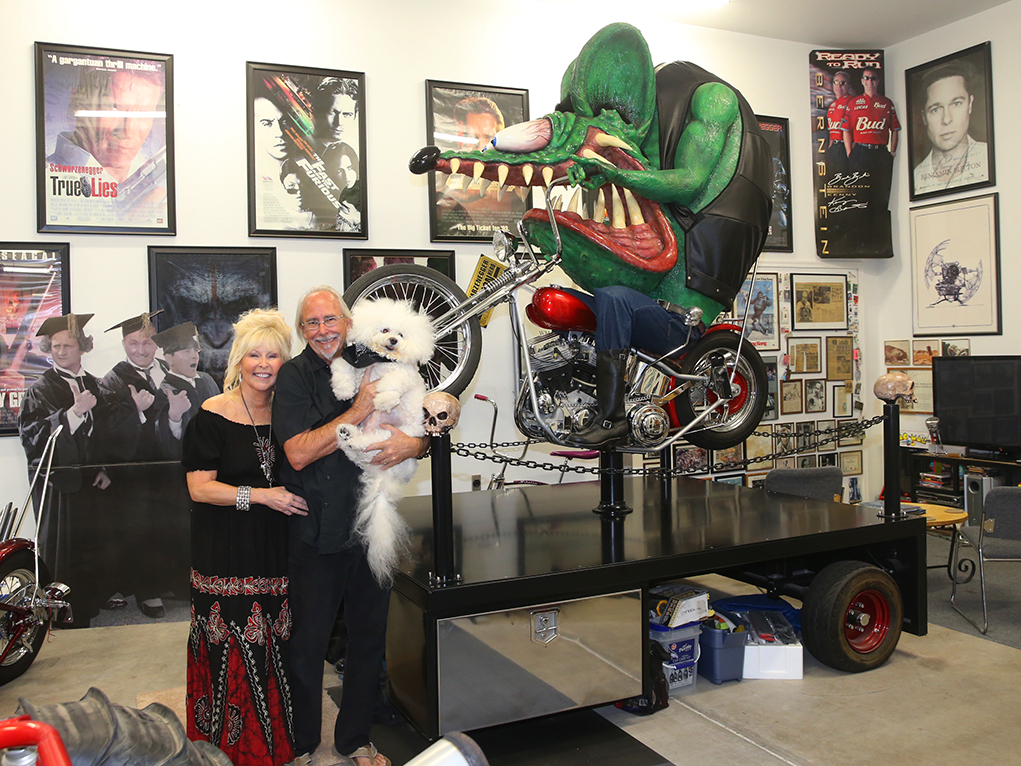 Toni and Andy Miller pose in their garage next to a replica “Rat Fink” sculpture and movie memorabilia posters. The movie posters and photos represent the movies the couple has worked on. Jillian Danielson/RiverScene

After a flirtatious phone conversation, the two didn’t meet right away. Toni was involved in a car accident and spent time in the hospital. When she returned to work, her boss said that an Andy Miller had been calling for her and suggested she call him back.

She did, and after dozens of red roses hand-delivered by Andy, they became a couple.

After some time together, Toni began working for Andy and the two embarked on one of their most enjoyable, satisfying projects when they spent six months in the Bahamas working on the film “Into the Blue”. 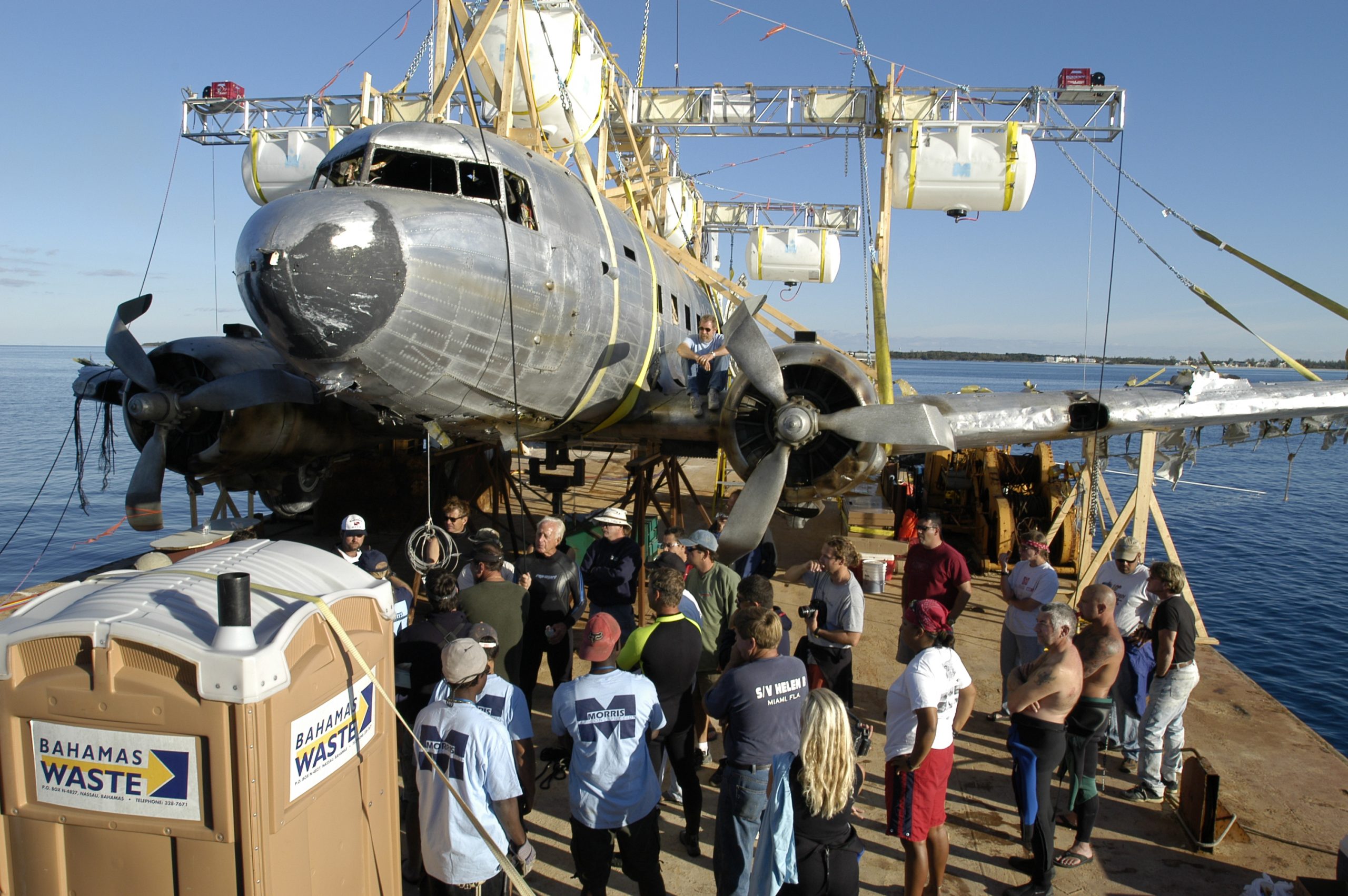 Behind the scenes of filming “Into the Blue” courtesy Andy Miller.

Andy said easily the most satisfying job he had was “Into the Blue”.

“Everything about it was great. The job was awesome for me. We were in The British Colonial Hotel.

“We had a little shop out by the airport and Toni was working for me. She was my buyer.

“Toni got up every morning at 5 and got with the driver and would be out all day on the island looking for metal, lumber, welding supplies … whatever we needed. It was unbelievable.

“It was the greatest job of my life,” Andy said.

“’Into the Blue’ was my favorite project we did together. It was just one of those movies …” Toni said.

Andy, however, said the most rewarding movie he worked on was “Titanic”. 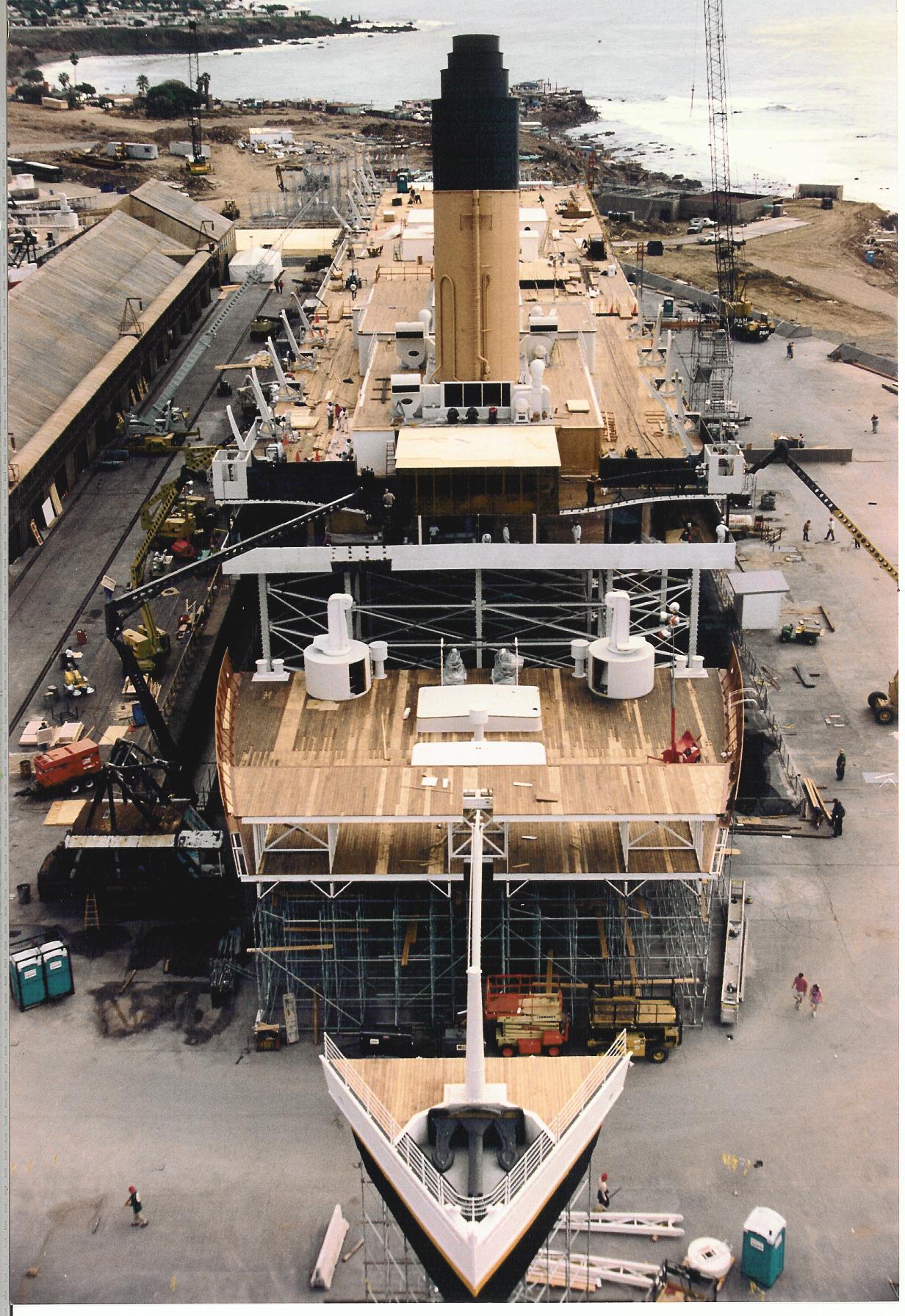 A view from above the “Titanic” as it was being built for movie production. The “Titanic” ship was built inside of a tank and Miller built the hydraulics to make the ship raise and sink. Photo courtesy Andy Miller

“We were down in Rosarita Beach in Mexico on the lot at Fox Studios and we were there before they finished digging the tank. We were there all throughout the digging of the tank – all the concrete all the steel structures all the hydraulic systems …

“When I finished that and got home, I said to myself there will never be another project that would make me nervous, scare me. It was so massively huge,” he said.

Andy was on the “Titanic” day shift working the rigging and hydraulics on the ships deck as it sank, and filming was completed at night.

“I was on ‘Titanic’ for 10 months and we were probably four months prepping before we started filming.

A view of the “Titanic” from the 40 ft. tank that it was built in to. Indoor scenes of the movie were filmed at the studio location.  Photo courtesy Andy Miller

“There was no easy part about ‘Titanic’. We had so many things to do in a very short period of time. You see the pictures of building the boat, raising the boat. We dug a tank that was 40 feet deep.

“Already the crew had to work 40 feet above the boat and then when they got ready to lift the boat, they had to go up another 30 feet to get the decks above up high enough. It was a huge undertaking,” he said.

The couple also worked on “The Life of Pi” on location in Taiwan.

Andy has worked on crews for three Oscar-winning crews – “Titanic”, “Benjamin Button” and “Life of Pi”.

Both agree that while in the midst of making the sausage, so to speak, they have no idea how it all fits into the final product.

“Back in the day we did everything in house. We had the tool shop. We had electricians. We had everything and everybody works,” Andy said of changes in the industry.

“By the late ‘70s they started to clear all that out. And you rent your own equipment to them. Everything started to fall apart slowly. I could see it happening. They didn’t want to do any stage work in the studios anymore. They would go find a warehouse somewhere,” he said.

Andy’s movie resume would fill a story all by itself and needless to say, computer-generated imaging is not in Andy’s wheelhouse. His path was the hard work and the creativity he brought to his projects.

Andy and Toni Miller’s mementos reside in Lake Havasu City now as they enjoy the next chapter of their magic adventure.

To view behind the scenes videos clips by Andy Miller of  movies , go to our YouTube Channel playlist by clicking here: https://www.youtube.com/playlist?list=PLfQLHClQfeEHlMUVi6FW8651quBdXRTL2 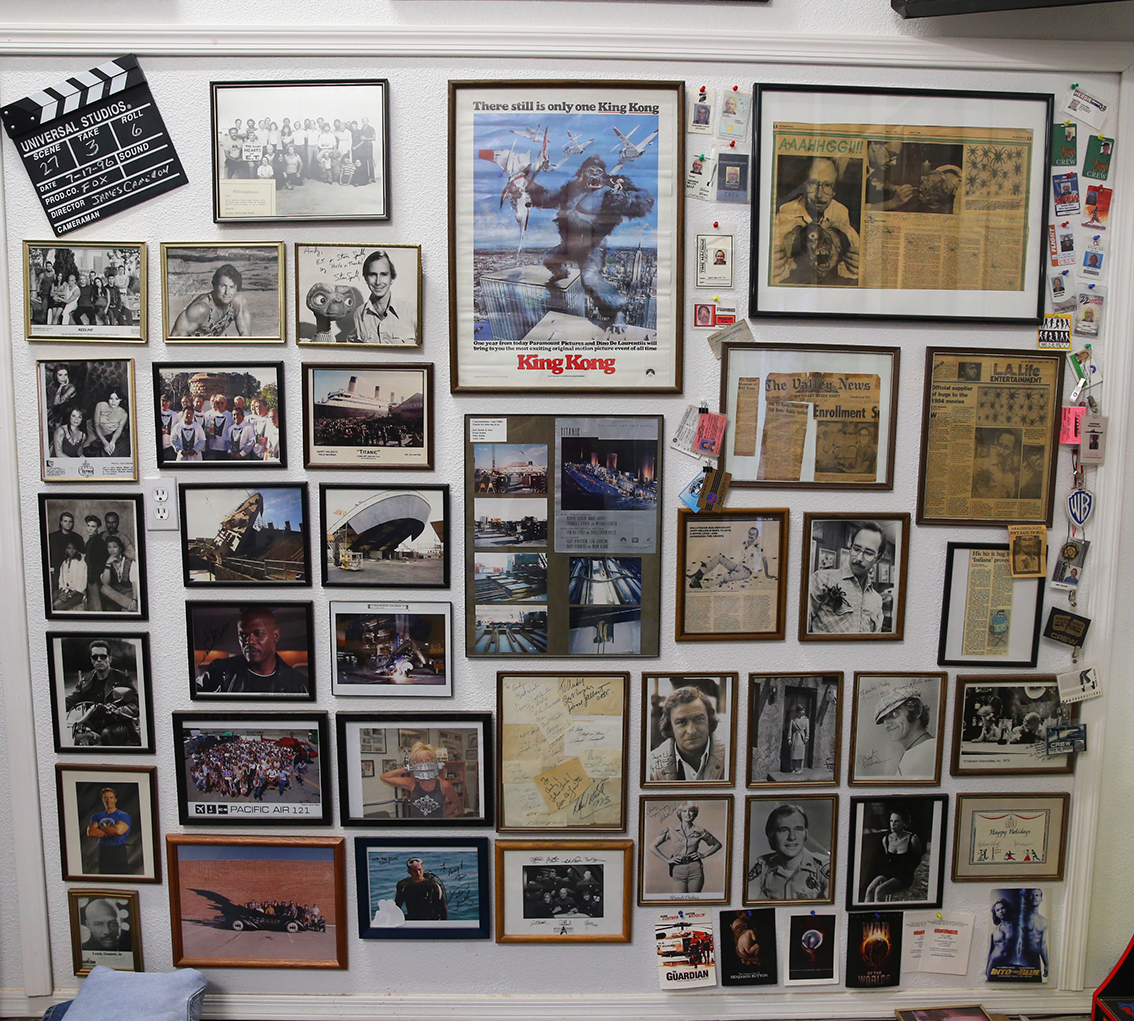 Photos and autographs hang on the Millers’ wall from movies they have worked on. Jillian Danielson/RiverScene 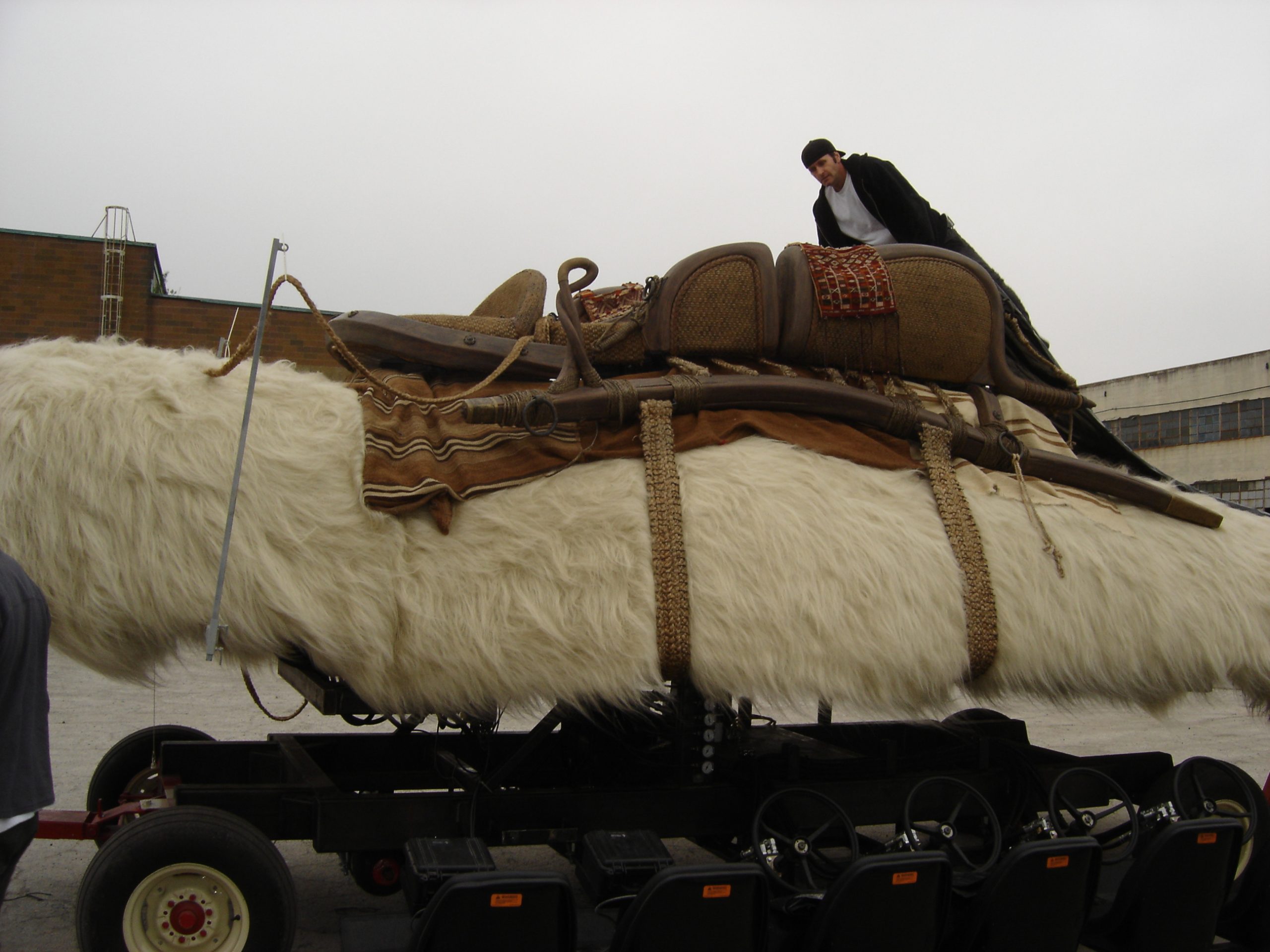 A movie prop Miller worked on from the “Last Airbender.” Photo courtesy Any Miller 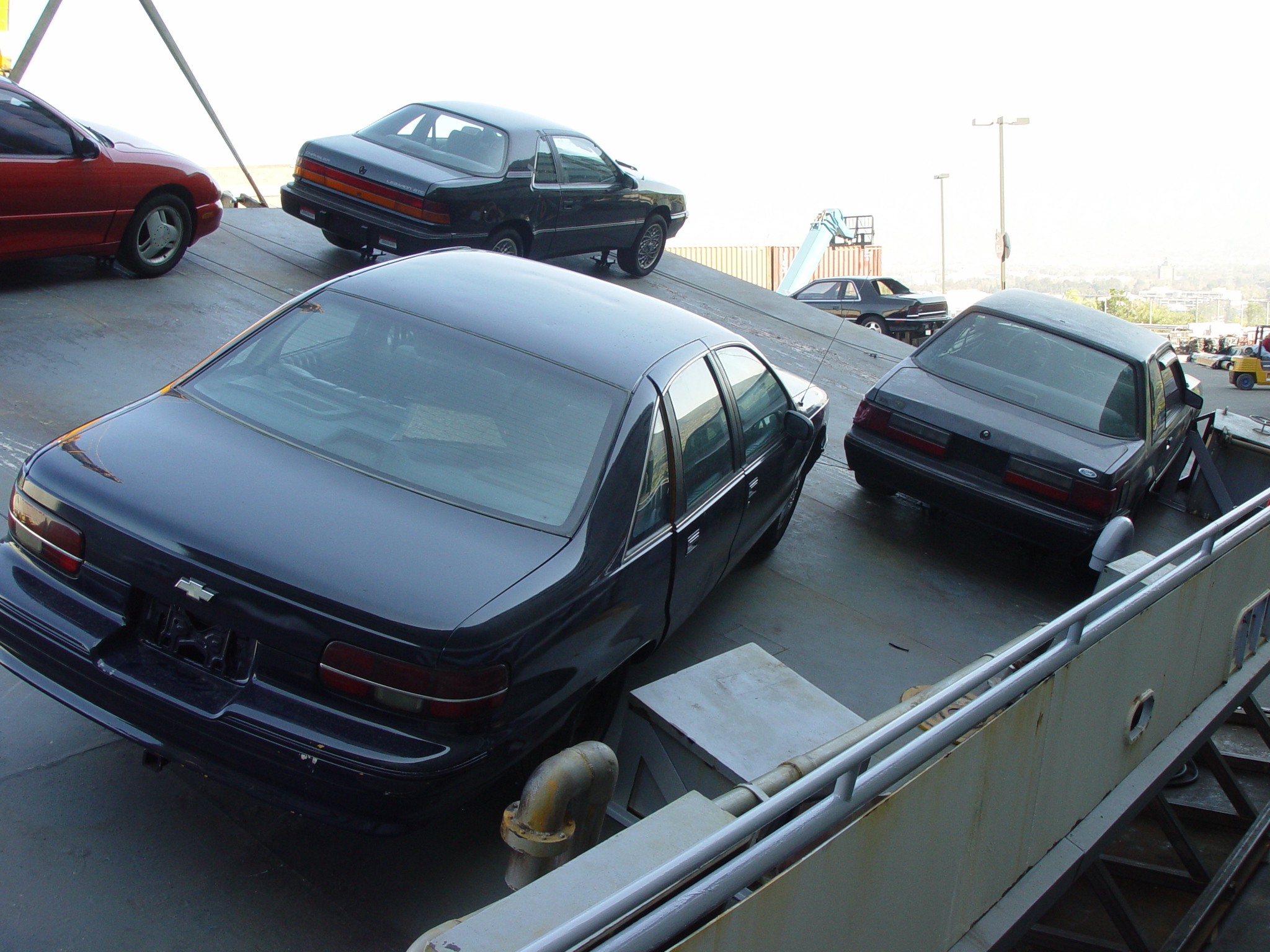 A platform of cars which was moved by Miller’s hydraulics in the movie “War of the Worlds” which starred Tom Cruise. Photo courtesy Andy Miller 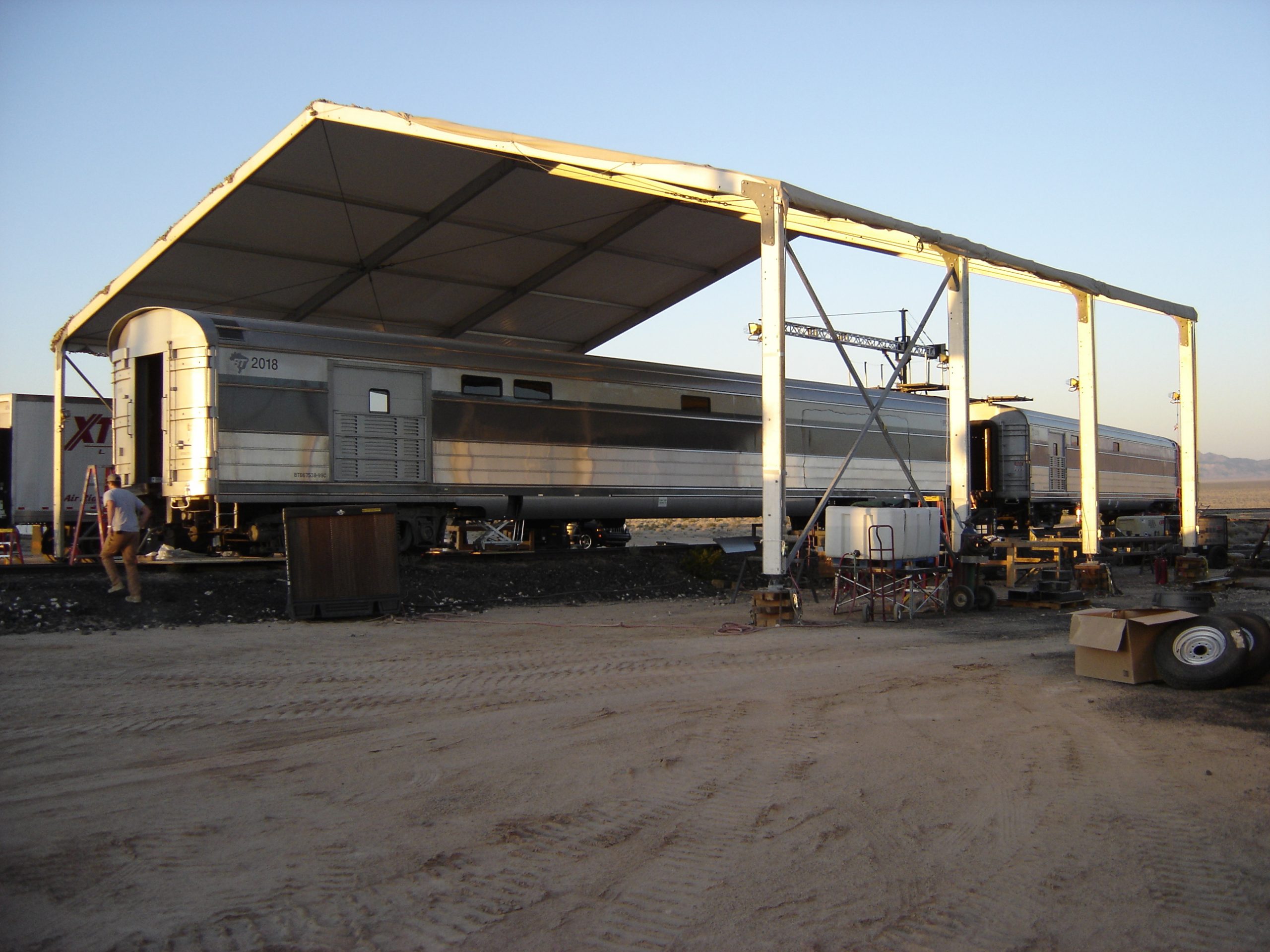 Trains from the set of “Fast and the Furious” that Miller worked on. Photo courtesy Andy Miller 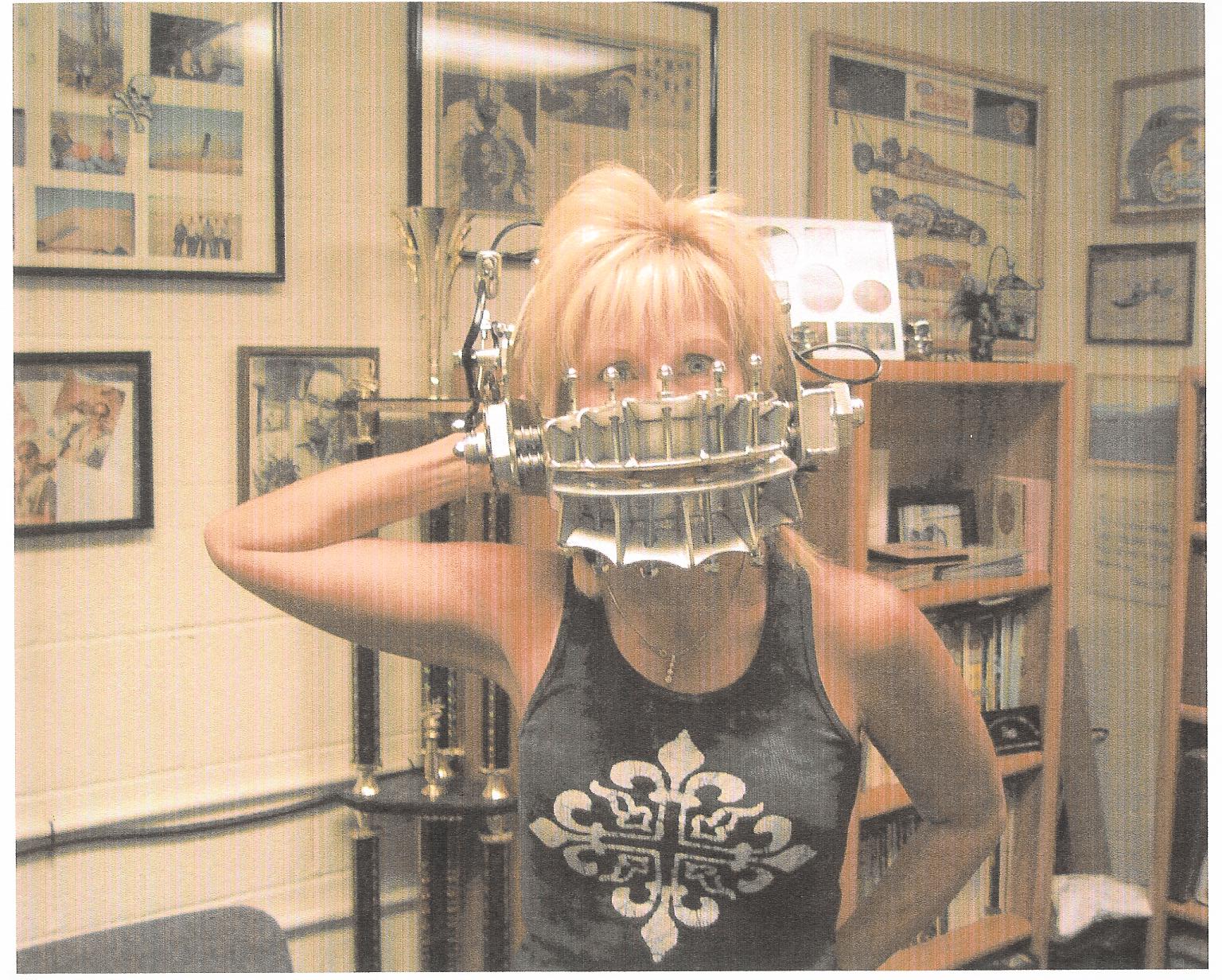 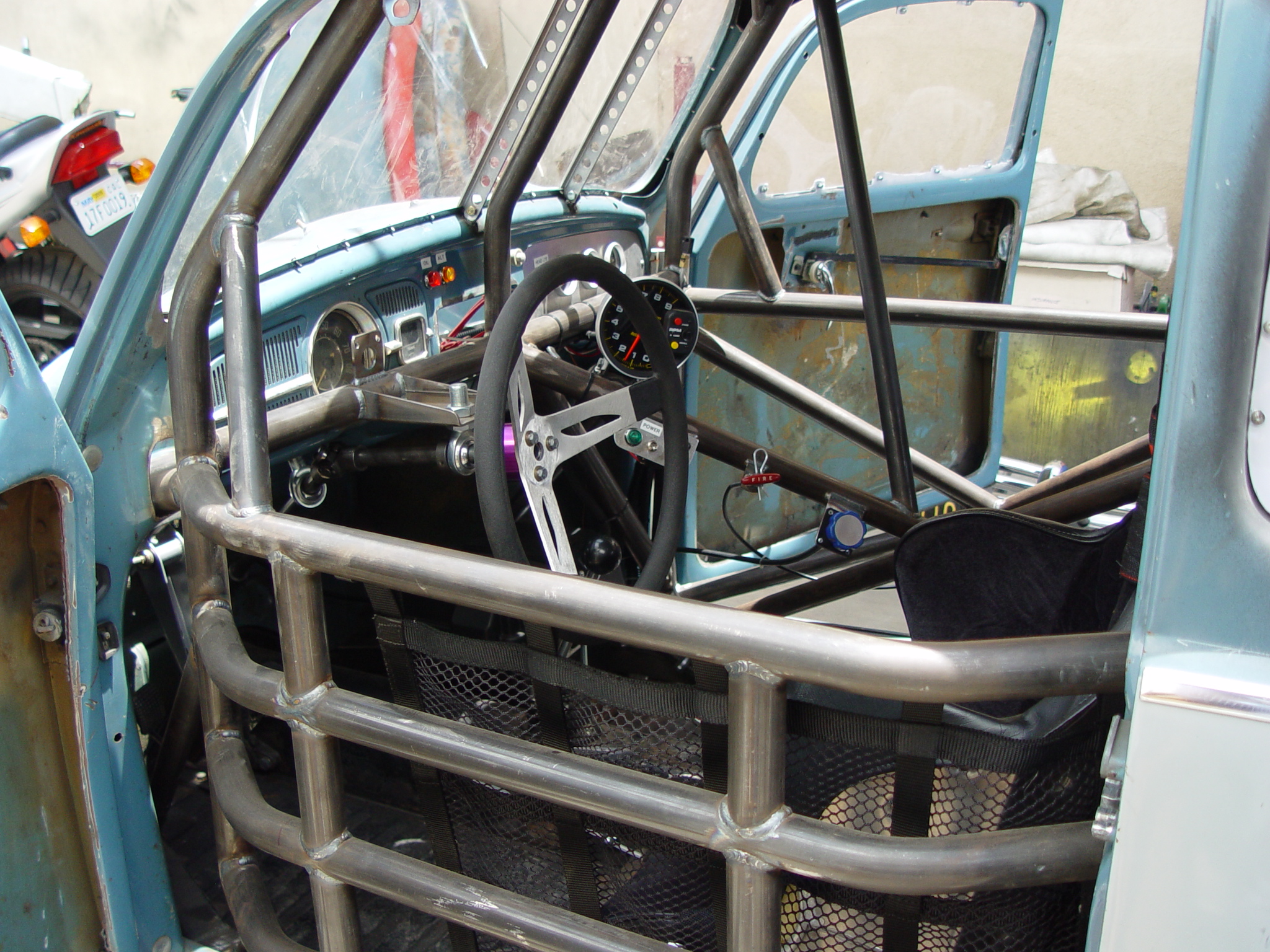 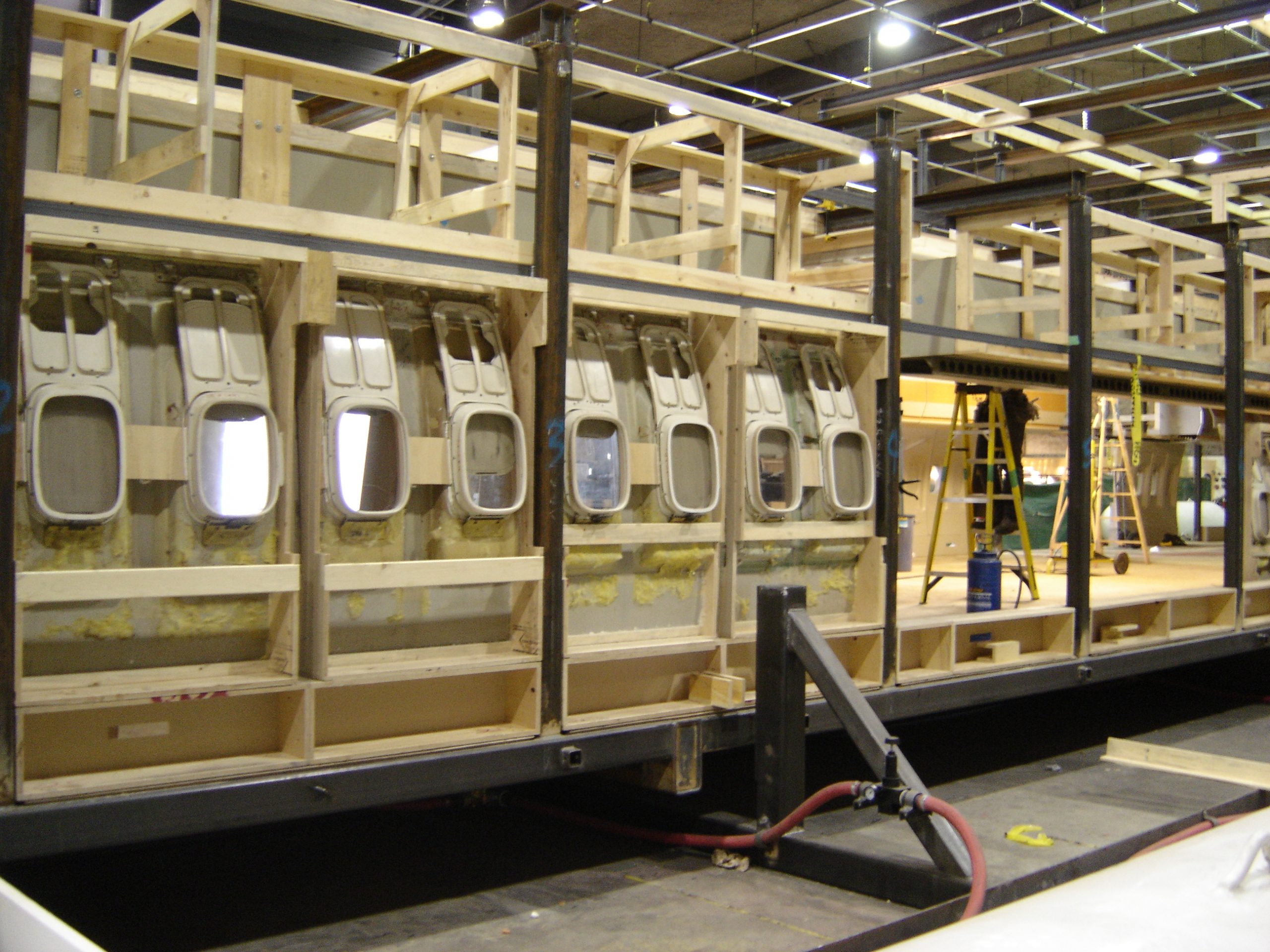 A behind the scenes look at “Snakes on a Plane.” Photo courtesy Andy Miller 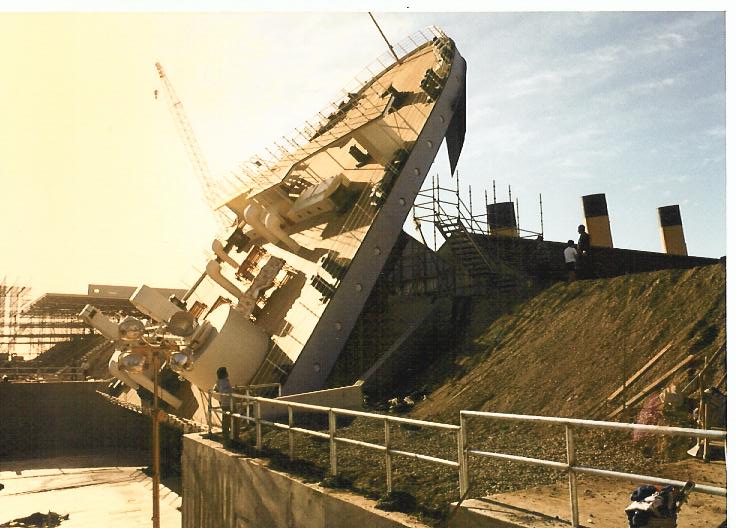 A behind the scenes look at the deck of “Titanic” as it was being built with hydraulics by Miller. Photo courtesy Andy Miller. 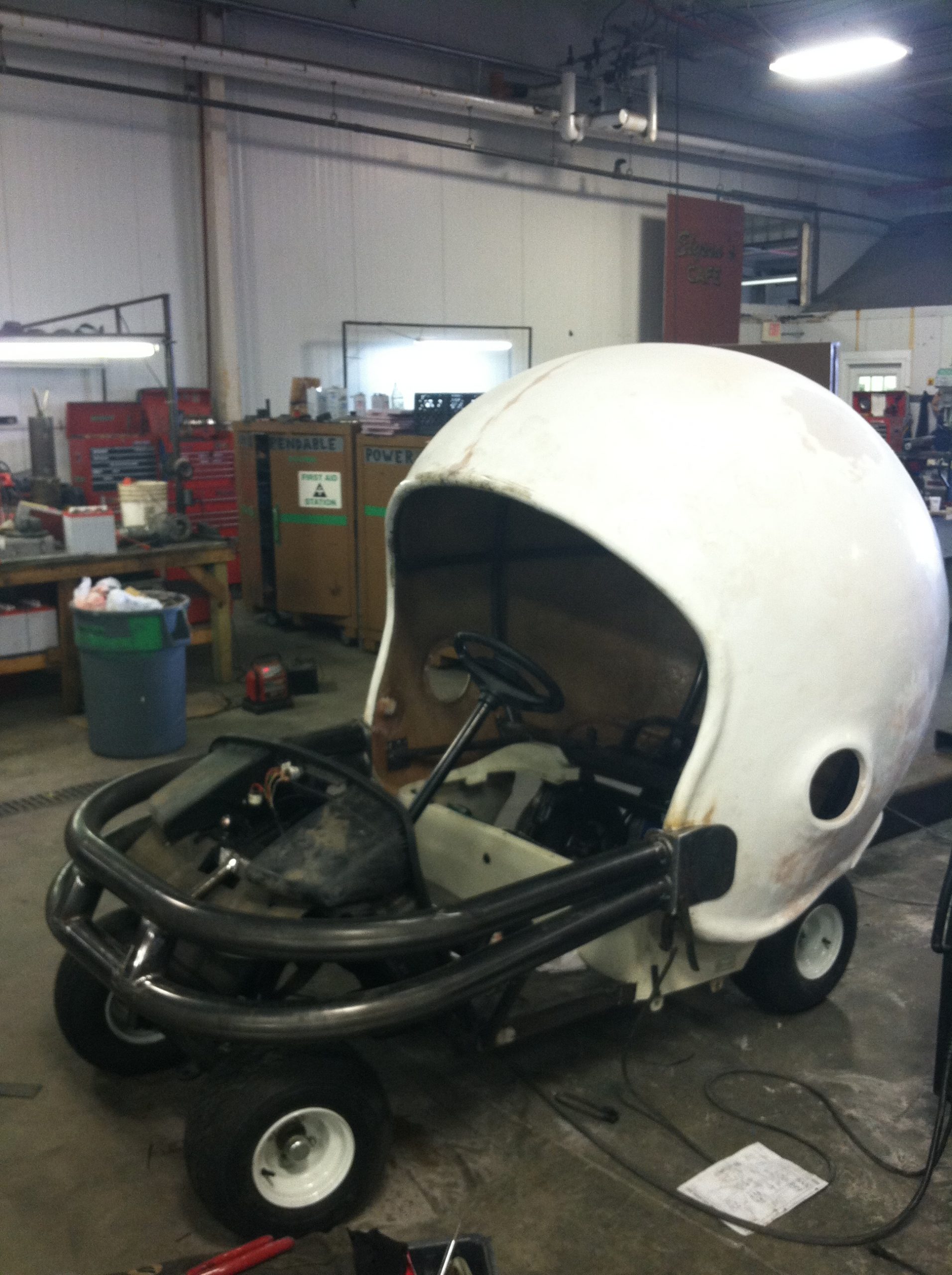 A helmet car as it was being built for the movie “22 Jump Street.” Photo courtesy Andy Miller 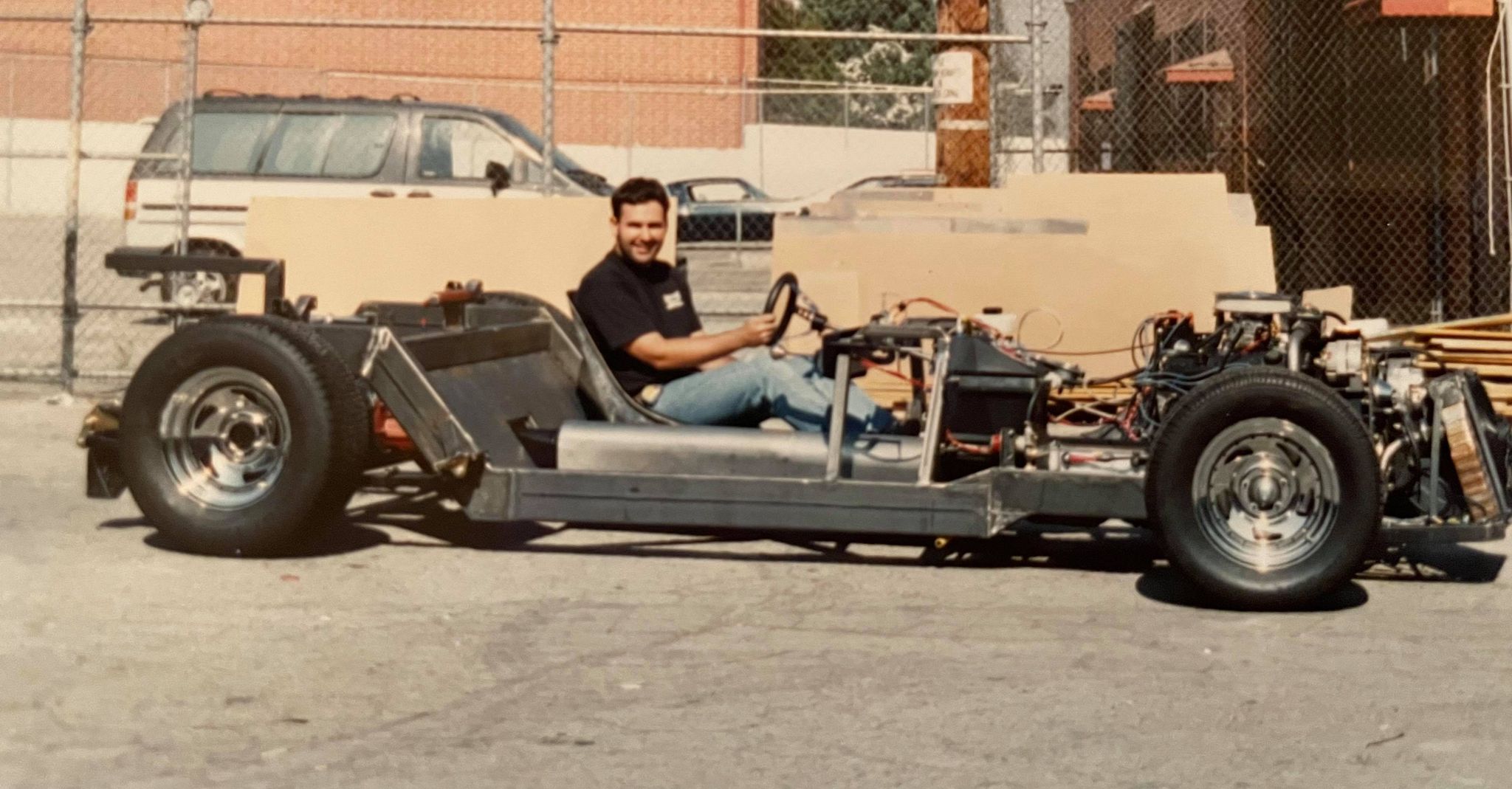 The inside of the “Batman Forever ” car built by Miller and his crew. Photo Andy Miller