Havasu Supports Run For The Wall 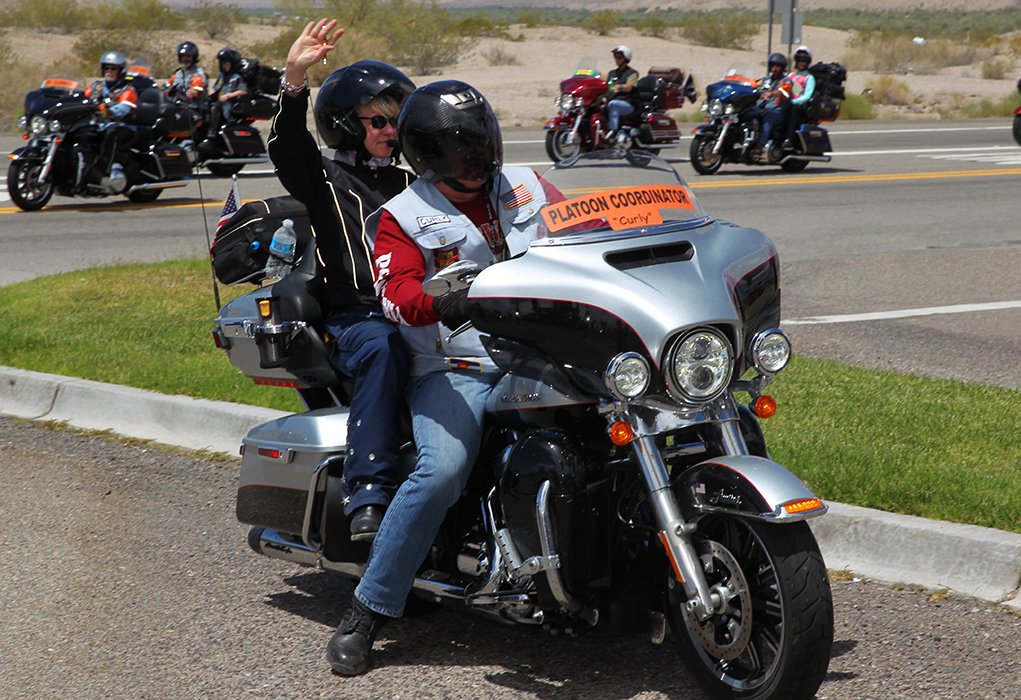 The Run For The Wall Midway Route stopped at I-40 and State Route 95 about noon Wednesday to refuel motorcycles and support vehicles. A group of Havasu residents were there to welcome them as they came off I-40. 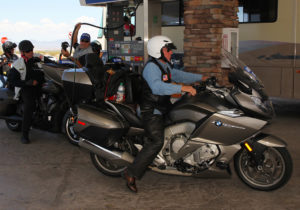 Riders pull up to the Chevron Station to gas up for the next leg of the trip. Jillian Danielson/RiverScene

For the second year, the riders’ gas was paid for at this stop because Havasu resident Roy Meek worked hard to collect donations.

Meek served in the U.S. Army from 1965 to 1967, and was in Vietnam 1966 and 1967. He is a member of American Legion Post 81, the American Legion Riders, Vietnam Veterans of America Chapter 975 of Mohave County, and also the Elks. Roy rode with RFTW Central Route in 2014 as far as Kansas, as his schedule did not permit him to go all the way to Washington, D.C.

Last year, Meek collected $3,500 in donations for fuel at Exit 9; this year, he collected $3,000. The total gas bill at Exit 9 this year was about $1,500, and Roy presented the balance to the RFTW leadership to use for fuel stops that may be short of funds.

Fuel is paid for through donations all across the U.S. as RFTW travels to Washington, D.C. Most, but not all, gas is paid for. Local veterans and civic organizations also provide almost every single meal across the country, from breakfast burritos or full breakfasts to full dinner meals of brisket, tri-tip, barbecue, chicken, hamburgers, and all the fixings, including desserts. 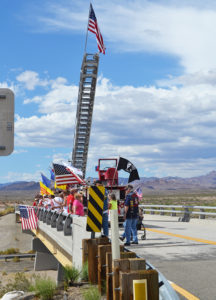 Supporters line an overpass Wednesday afternoon on the I-40 to show their appreciation for the Run For The Wall. Judy Lacey/RiverScene

Rafael Lizarraga is a Tailgunner for Midway Route’s 6th Platoon and lives in Los Angeles. When asked what Run For The Wall means to him, he responded, “It means doing something for those who need help, especially those who served our country and are in need of help.”

Lonny “Goofy” Wiessman, of San Jose, Calif., is also a Tailgunner, but for the 5th Platoon.

“I ride with Run For The Wall for the 23 names of my brothers on the Wall,” Weissman explained. “I make this journey every year and it gives me a chance to say hello and goodbye one more time.”

“When we get to Washington, D.C.,” Weissman said, “we send all of the RFTW new guys and gals, or FNGs, to Arlington National Cemetery for the first time.”

With Weissman was Jerry “G-Man” Jones from Brent, Wash. He explained that “Run For The Wall for me is the healing. I came back from Vietnam in 1968 and I was not met with the nicest ‘hello’s,’ so for me to go with my brothers to the Wall is a healing time, and to see the great support that we’re getting from people along the way … not at all what we received in 1968 when we came home. But people are really respecting those that are in the military now and our young men and women who are coming back from all the places overseas, they need to have that same respect and that love given to them and shown to them. We just hope that by us doing this, going all the way to the Wall, it brings others closer to that healing that they need as well, because we’ve all lost a lot of brothers, and in today’s environment even sisters, over there. We need to respect them and we need to show them what it’s all about.”

Added Weissman, “And what’s really important for us Vietnam vets is that what we do here and what we’ve done is to make sure that no veteran is ever treated the way we were. That’s the big part of Run For The Wall, that it’s about the healing but it’s also about the support and recognition of those that serve today and in the future.” 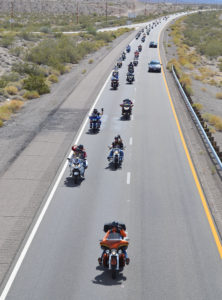 The second wave of RFTW riders, the Central Route, were greeted by Havasu supporters standing on the overpass at Exit 13, Franconia Road as they passed by about 3:40 p.m. Riders were also treated to the sight of an antique fire truck with an American Flag raised high on its ladder, courtesy of Havasu’s Boat Brokers. Becca Messmer parked “Big Red” on the overpass and unfurled numerous flags along the side of the truck. Supporters held large American, POW, and Vietnam flags high for the riders to see. Several Lake Havasu Military Moms held a sign reading, “THANK YOU.”

Another supporter at Exit 13 was Havasu local Harold Sweeney. Sweeney served in the Army Airborne, 5th Group, from 1962 to 1991, with a break in service. He was in Vietnam from 1964 to 1966, and is a member of American Legion Post 81, American Legion Riders, and Patriot Guard Riders.

Sweeney held a hand-painted sign that read, “GO RFTW – YOU MAKE US PROUD.” 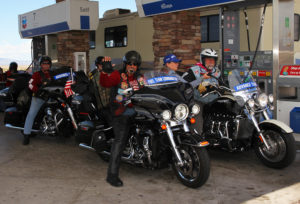 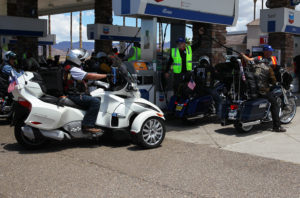 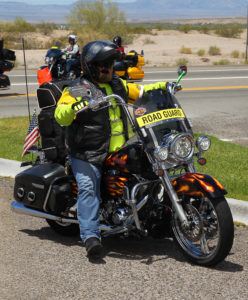 One Response to “Havasu Supports Run For The Wall”