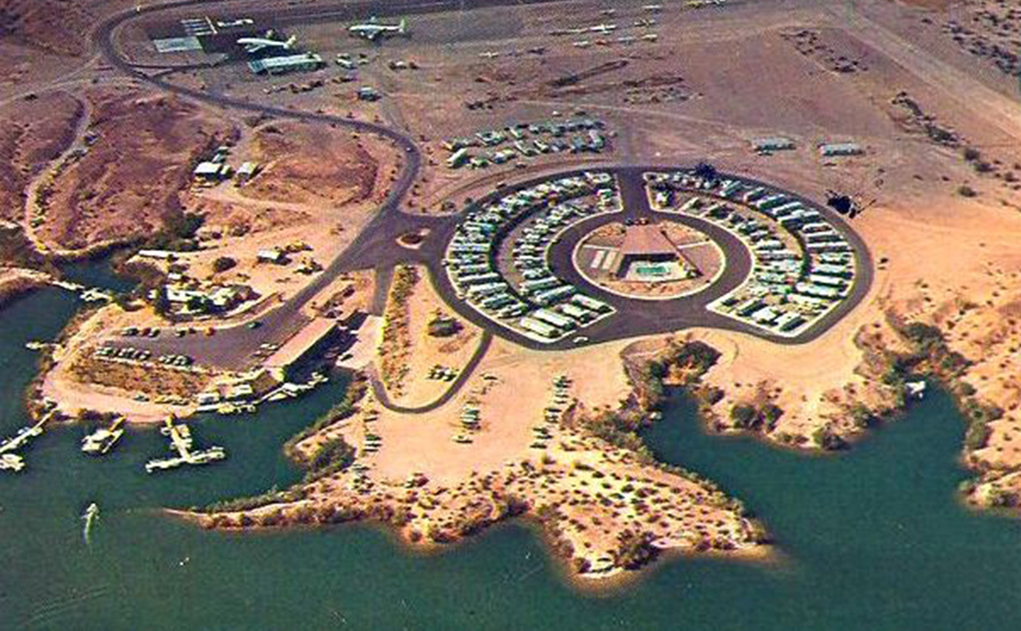 Lake Havasu’s Site Six is a popular place to launch boats and to fish. But 74 years ago, it served a very different purpose.

In 1942, the United States had just entered World War II after Pearl Harbor was bombed by the Japanese. The U.S. Army Air Force began establishing numerous airfields all over the country for training pilots and aircrews of USAAF fighters and bombers. In Mohave County, seven emergency airfield sites were built along the Colorado River at Kingman, Site Four; Topock, Site Five; Lake Havasu, Site Six; and the Bill Williams River, Site Seven. 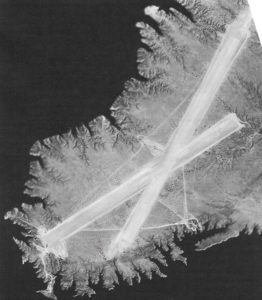 The military built a dirt runway on Havasu’s peninsula, which is now the island, in 1942 and it was named “Site Six.” The site was also used by students of the Kingman Army Air Corps Gunnery School for their practice range. In 1943, the military expanded the facility to include barracks, a mess hall and officers’ quarters.

In 1944, the area was also used for rest and relaxation for Army Air Force personnel. The military offered fishing, swimming, skeet shooting, boating, and hiking. B-17s landed every week with a load of personnel, and picked up the previous week’s personnel to take them back to their bases.

When WWII ended, the military closed the landing field in November 1946, as there was no more use for it. But they planned to reopen it and expand the facilities.

However, the military wasn’t aware that the property they had been using during the war was privately owned. They had assumed it was state land, when in fact it was owned by Corinne and Victor Spratt of Needles. 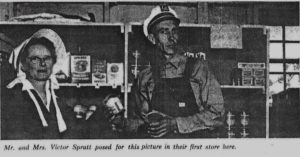 Corinne and Victor Spratt in their first store in Lake Havasu. Photo courtesy Museum of History

In the late 1930s, the Spratts were looking to purchase land on which to build their retirement home. When they found Lake Havasu, they immediately loved the area and decided to one day build their retirement home on top of a high hill. They purchased all of the land from Lakeview Motel down to the waterfront and extending to Catfish Bay. But it would be years before they retired, and they continued living and working in Needles, where Corinne was a schoolteacher and Victor worked for the railroad. 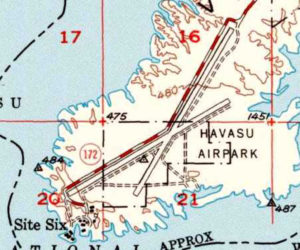 The 1950 USGS topo map depicted the _Havas u Airpark_ as having 2 paved runways. Courtesy Museum of History

One day during the war, a friend of the Spratts told them he had gone to Havasu and that the government was building a runway on their land. The Spratts waited for a call or visit from the military asking for permission to use their land. But the call never came, and the Spratts didn’t contact the military about using their land because it was wartime and the land was needed for the war effort.

But when the war ended and the Spratts were ready to retire, they went to the courthouse in Kingman to ask how soon they could get their land back from the government. They were told they would have to prove they owned the land, and the Spratts produced the deed. The military had to return the land on the peninsula to the Spratts, and they asked for a token amount to pay for the 12 buildings, water towers, and generation power house that the military had built on the site. 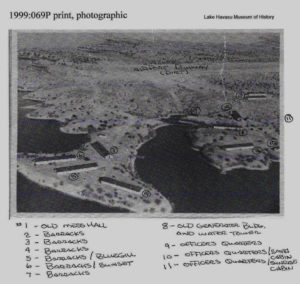 Late 1940s when the Spratts had their Fly-In Fishing Resort, with Butch’s notations of various buildings. Photo courtesy Museum of History

The Spratts decided to turn Site Six into a resort, which they called the “Fly-In Fishing Resort,” as many visitors to Havasu at that time flew their planes into the area. They converted the existing military buildings into living quarters, a grocery store, restaurant and a bar, and the resort was widely known through the southwest. People could rent a boat and stay in the barracks for $2 a night.

Although the war was over, military personnel continued to come to Havasu on leave. The Spratts set aside one of the barracks with cots for them to use. 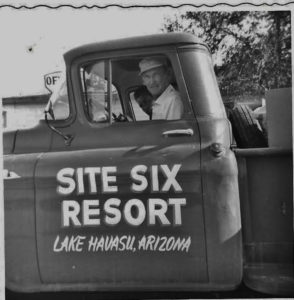 One ofSpratts’ workers in 1957-58 with the old mess hall in background. Photo courtesy Museum of History

The Spratts were unable to obtain a liquor license for some time, but a law at that time allowed people to stand two feet outside of any building and drink alcohol. So Victor Spratt attached a bottle opener to a two-foot-long cord, and patrons had to drink outside in the hot sun.

Then one day in 1958, Robert P. McCulloch showed up. He had discovered Lake Havasu and wanted to buy land there for testing his outboard motors. He convinced the Spratts to sell almost all of their land. McCulloch built the building that still stands next to the launch ramp, for testing his outboard motors. In 1964, McCulloch paved the runway to get ready for the heavier aircraft and larger fly-in traffic since McCulloch had started to bring in their commercial aircraft to Lake Havasu.

It was the beginning of the birth of Lake Havasu City. 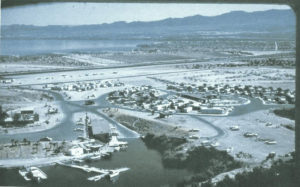 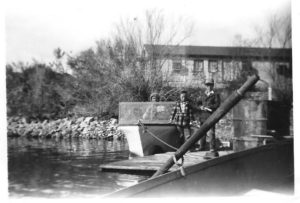 Butch Wood – in plaid jacket – and his grandfather Doc Young at his dock at Site Six 1953 or 54. Photo courtesy Museum of History 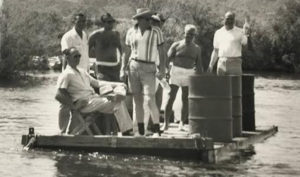 Robert McCulloch Sr. (white shirt far right), Robert McCulloch Jr.
(shirtless), Ollie Heck (sitting in chair; McCulloch engineer), and others
tour the river on a raft in 1959 looking over the layout of the land for
the new Lake Havasu City. Photo Courtesy Musuem of History

RiverScene Magazine would like to thank Butch Wood, docent at the Lake Havasu Museum, whose vast knowledge of Havasu history was most helpful with this story. We also thank Butch for allowing us to use his personal photographs for this story. Wood began visiting Lake Havasu with his grandparents, “Doc” and Jewel Young, in 1953. His grandparents moved permanently to Lake Havasu in 1957, and Wood moved to Lake Havasu in June 1965. Information regarding the various incarnations of Site Six was shared by Wood.