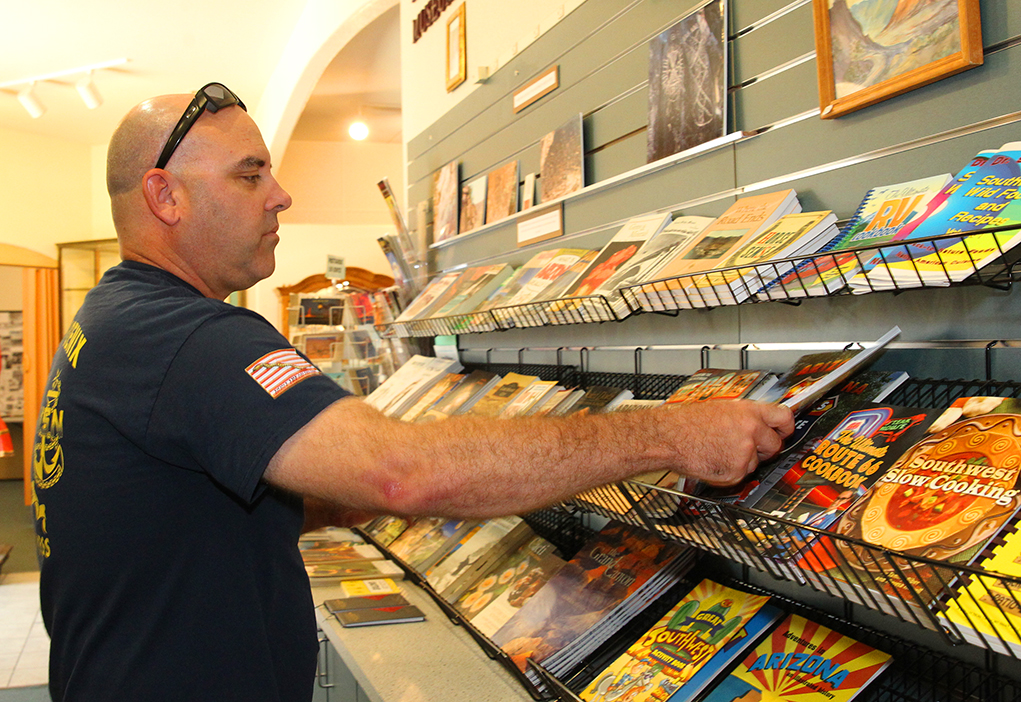 Rich Crayne is an upbeat, positive person, but was dismayed at the amount of negativity in Lake Havasu City. It was likely to be anywhere, but especially was prevalent on social media. There are websites dedicated to praising and criticizing businesses, but many eventually disintegrate into nasty attacks on businesses, as well as personal attacks against individuals.

So he embarked on a personal mission to combat the negativity. Crayne has been performing good deeds for a long time. He’s been in the U.S. Navy for 22 years, much of that time in Havasu, so he sees daily the people who are struggling and need help. He provides that help by taking food, water and other necessities to the homeless, or buying food for a hard-working single mom.

Crayne doesn’t just care; he takes action. Wednesday, he posted on Facebook that he was looking for a homeless man who wasn’t where he usually was. He had some donated items to give to him. More than a dozen people joined in to help find the man. They posted that they saw him at certain times in various places around town.

The day before, he said he wanted to do something for the kids in Havasu, and asked for suggestions. A multitude of suggestions flooded his Facebook page, with many offering to help with the project.

Others post random acts of kindness that they witness. And the positive comments are a breath of fresh air to read, rather than complaints and criticisms.

After contemplating how to combat the negativity, three weeks ago an idea came to him.

“I wanted to do something to put a smile on someone’s face,” Crayne explained. “Just do something to make someone happy.” He started leaving $5 and $10 bills around town and posting pictures on Facebook of the general area as a clue. People began noticing his posts and they joined the treasure hunt.

“That’s why I started this, Crayne said. “I was so tired of hearing all the negative comments and wanted to remind everyone that there are good things going on. We can change the negativity; we can do something nice.”

But he knows he can’t change everyone. “It will never go away; we don’t live in Utopia.”

Then three weeks ago, Crayne posted on Facebook that he would be at Starbuck’s that day at a certain time, and he would buy a cup of coffee for the first person to find him there. That led to giving out clues to make it more fun. The treasure hunters would have to figure out where he was by the clue, and when they found that clue, he would give them the next clue. In the process, he would ask businesses for permission to hide something in their store, and businesses began offering him gift certificates to give away.

Today in the Lake Havasu Museum of History, he received a phone call from yet another business offering a gift card for him to give away.

“I’ve never asked for anything from businesses,” Crayne said, “but they want to join in the fun.”

His mission was growing, and Crayne started a new Facebook page to give out his clues. On “Pay it forward Havasu,” he wrote that, “This page was created to promote positive community involvement by ‘paying it forward.’ The intention is to show as many random acts of kindness as we can!” On the Pay it forward Havasu page,” fans watch for his clues and follow him from place to place until he gives the clue for the final destination. The clues often are close-up photos of something near where the clue is, but sometimes are cryptic hints.

He started the Facebook page Saturday, and it already has close to 600 “likes.” He posts the night before what the prize for the next day will be, and gives the first clue in the morning. His followers are serious about this treasure hunt, often posting “I found it!” when they figure out a clue.

Today Crayne was giving away a gift card for two-hour paddle board rental and a free drink. It would be given away at the museum. He decided to hide them in a Route 66 book in the gift shop. Then he had to send out his first clue, so he left for another area of town to take a photo of his GPS showing his location and the clue: “Come to the spot that’s made of blue, pay it forward for another clue!” Once hunters found that location, he sent out the next clue: “Look around, I can be found in old downtown.” 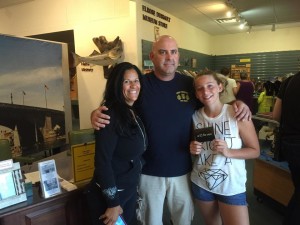 Crayne hides treasures every few days. He often has as many as 25 treasure hunters show up; today six made it to the final destination. There are hundreds of history and travel books in the Museum’s gift shop. It took about a half hour for someone to find the treasure.

“One person picked up the book the gift cards were in three times and flipped through it but didn’t find the cards,” said Crayne.

Alisha Anderson and Jenn Johnson were the winners today, and they were excited to be winners for the first time. Others in the group have been following Crayne for a while and some had previously been winners.

“This was never about notoriety,” Crayne said. “I’m not promoting fundraising. I just want people to do something positive in their lives.” Today he asked hunters to bring a non-perishable food item for the homeless to one of the locations in order to get the next clue.

In further explaining why he’s doing this, Crayne said, “In the military, we’re taught we give, we don’t receive. It’s not about us.”

For further information, visit the Havasu Pay It Forward Facebook page at https://www.facebook.com/groups/656785181118728/