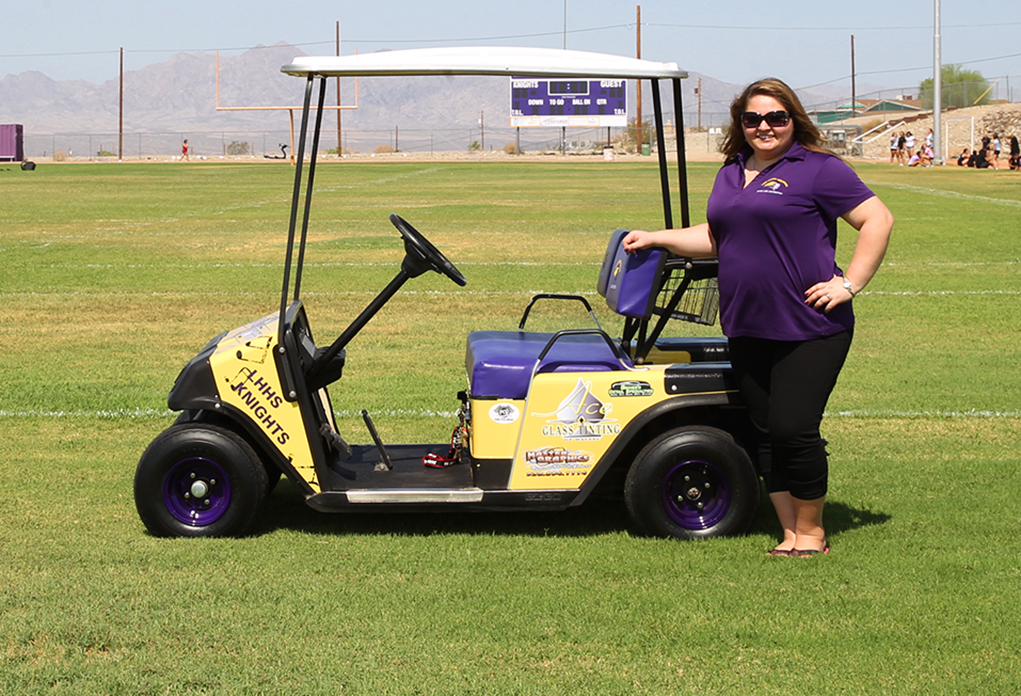 Thanks to the generosity of seven businesses in Havasu, the Lake Havasu High School band’s golf cart looks like new again. 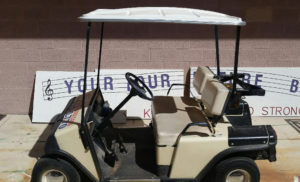 The same golf cart has been used since 1994 to transport band instruments, water and other necessities around the campus. Kimberly Palmieri Schreiber, Director of Bands and Orchestra at the high school, said it was in pretty bad shape, with corroded batteries and dirty and ripped seats.

Schreiber has been band director since 2014, coming from schools in Kingman and Parker. She was born and raised in Lake Havasu, after her family moved here from New York. After she graduated from Lake Havasu High School in 2006, where she was a band member, she earned her bachelor’s in music education from NAU. Schreiber then returned to Mohave County, doing her student teaching for the band director at Kingman High School, eventually becoming assistant band director. While in Kingman, Schreiber met her husband, Craig Schreiber, whose brother was the band director. They married in 2014.

Her first teaching job was at Manzanita Elementary in Kingman. After a year at that school, she taught a year in Parker, and when the band director position opened up at Havasu’s high school, Schreiber was hired. She soon came face-to-face with the shabby golf cart, and decided to ask the community for help to get it in good shape again. 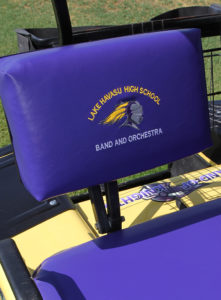 “Our community and businesses here in Havasu are really willing to help,” Schreiber said when explaining how the band’s golf cart got its upgrade. Seven businesses paid a total of $2,315.10 for restoration of the cart this summer.

The beautiful golf cart, with the school’s colorful mascot logo, now proudly carries instruments around campus and to football games.

Schreiber has great praise for the students in her music classes. She teaches the marching band, jazz band, concert band, percussion, the flag team (color guard), and the orchestra. They perform at football games and parades, and the band also enters competitions. 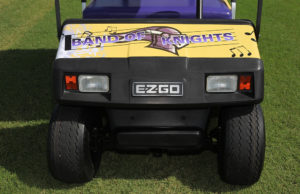 The front of the golf cart wrapped with “Band of Knights.” Jillian Danielson/RiverScene

“We had 45 marching band members last year,” Schreiber said, “but this year we started with 62, ending up with 54, so we’ll be entering the ‘big league’ — Division 3. The past four or five years we were in the entry level Festival Class. This year we call our band show ‘City of Lights,’ and our first competition is Oct. 1, in Prescott. If we qualify, we’ll go to the State Marching Festival in Phoenix.”

Schreiber is proud of her music students. “This is my home and always will be. My husband and I will be raising our family in Havasu. I think it helps the kids to see that I’m here to stay and that I’m dedicated.”

And it surely helps their morale to see their instruments carried around in a beautiful new-looking golf cart.