A little bit of Hollywood is coming to Havasu next month.

Filmmakers Amber Goetz and Jeff Janke will roll out the red carpet for the premiere of their new film “Highway to Havasu” at 7 p.m. on April 29.
The comedy — shot at locations like London Bridge and Rotary Community Park — follows a heartbroken teen who takes a spring break trip and connects with a local girl.

Goetz called the movie a celebration of Havasu, particularly the hidden spots away from the bright lights of the Bridgewater Channel.
“We thought it would be so fun to do this here,” she said. “It is a great tourist destination. There are amazing things to do.”
The veteran actress is a Havasu native and felt her hometown would make the perfect location for a movie.
Los Angeles and many other high-profile locations are so expensive that shooting is almost impossible without major backers, but Havasu is still accessible for independent filmmakers.
Janke, Goetz’s husband, created and wrote the script within three days. Devoting their entire life savings, they jumped in as executive producers along with family member Julia Landry.

They hired an experience cast and crew from Los Angeles, and set them all up in various rental homes throughout the two-month duration of filming.

Caleb Thomas — who has made numerous TV appearances — anchors the film in the lead role, Max.
Goetz said they all bonded quickly and became “like family,” a rarity in Hollywood. 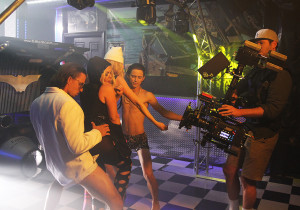 “You normally don’t get that close,” she added. “That was the most fun part, bringing everyone out here from LA. They can’t wait to come back.”
The cast and crew fell in love with the area, patronizing home-grown businesses and meeting locals who worked as extras during the shoot.
Goetz hopes many of those extras will attend the premier to enjoy the finished product.
“This should be exciting for people here — they don’t do movie premiers in Havasu,” she said.
After the red carpet and movie screening, the party will continue at Kokomo, London Bridge Resort’s famous dance club.
The premier coincides with the annual Desert Storm high-speed boat race, which brings thousands of tourists to Havasu.
Afterward, Goetz and Janke will fire up their RV and hit the road to bring the film to 45 cities across the country, from Sioux Falls, S.D., to Birmingham, Ala.

Facebook fans helped set the itinerary: Goetz and Janke asked where they should go and received an outpouring of requests for screenings.
Social media has been a big help in the promotion, Goetz said the trailer went up on YouTube two months ago and already has more than 40,000 hits.
The entertainment world is also taking notice: “Highway to Havasu” won “Best Comedy Feature Film” at the Hollywood Reel Independent Film Festival and received a nomination for the “People’s Choice” award. The festival ran from Feb. 18 to 29 in downtown LA and featured Oscar nominees “Trumbo” and “Anomalisa.”
The filmmaking couple, who have called Havasu home for the last seven years, have several other projects planned, but for now they are enjoying their film’s success.
“This is an exciting time to be doing something like this,” Goetz added.

IF YOU GO…
Highway to Havasu premier
April 29 at Movies Havasu
Red carpet at 7 p.m.; screening to follow
Afterparty at Kokomo
For more information, go to http://highwaytohavasumovie.com/.