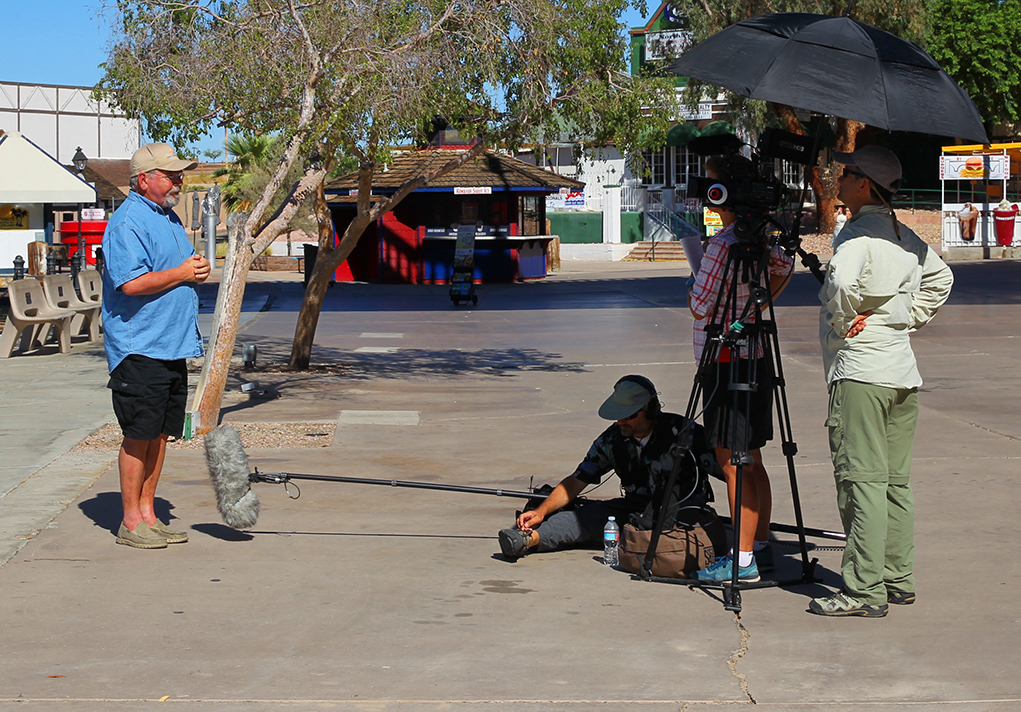 Writer-Director Katja Esson and her film crew are filming a documentary on the history and flow of the Colorado River. They filmed Wednesday and Thursday in Lake Havasu, where RiverScene met up with them to learn about the film.

Esson’s current project is a five-part series called “American Rivers,” scheduled to be released in 2016.

In her description of the series, Esson explains that she and her crew “follow a river from source to sea and discover untouched nature and ‘triumphs of technology.’ Along the way they encounter ‘river people,’ whose lives could not be more dissimilar: Intellectual trash divers and Native American airboat captains, anarchistic house boat communities, a lighthouse keeper who lives in a giant water filter and a Robinson Crusoe on a sleepy island slated to become a utopian ‘Isle of Millionaires.’”

While in the Havasu area, the crew filmed at Parker Dam, at the London Bridge, on the Lake and at the Lake Havasu Museum of History. 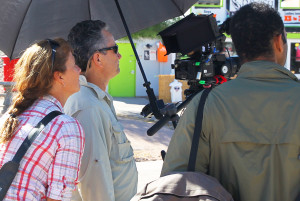 Working with Esson on this project are Justin Nnanna, Diego Reiwald, and Jose Luis Ocejo. Reiwald handles sound. Reiwald is known for his work on “Beyond Punishment” (2015), “Otto” or “Up with Dead People” (2008), and “Pittsburgh” (2006).

Jose Luis Ocejo was born in Mexico City, lives in Miami, and has been working with Esson for many years. He has 20 years’ experience as a cinematographer and eight years as a steadicam operator. His work includes TV commercials, feature films, soap operas, documentaries and music videos.

When she was a young girl, Esson’s dream was to be a veterinarian. It wasn’t until she attended the University of Miami that she discovered the theater and film and realized that was what she was meant to do.

Born and raised in Germany, Esson has lived in the United States for many years. She received her Bachelor of Film and Theater from the University of Miami in 1990 and began her film career in Miami working as a production assistant for the rap group 2 Live Crew. She moved on to direct a variety of award-winning short films, commercials and documentaries, including “Skydancer” (2010) and “Poetry of Resilience” (2011). Her first documentary, “Vertical Traveler” (2001), was broadcast on ARTE and PBS.

Esson’s documentaries have received numerous awards at film festivals in the U.S. and Germany. Her documentary “Hole In The Sky – The Scars of 9/11” (2006) won the Gold Award at the 2006 World Media Festival in Germany,

She currently resides in Brooklyn, N.Y., and divides her time between there and Hamburg, Germany, where all of her family live.

“I’ve been spending a little more time in Germany since my sister had her children. I’m their crazy aunt,” Esson laughed.

Esson has no family of her own and pronounces herself “happily divorced.” But she adds that she may be getting married again soon.

The next project on Esson’s schedule is a documentary about Cuba, on which she has been working off and on for the past two years. The theme will be Cuba’s past, present, and future, centering on its nightlife.

When asked what her ultimate dream film would be, Esson replied “It’s always the one I’m doing right now.” She is completely consumed by whichever film she’s working on, and each becomes her favorite.

Esson chooses American subjects for her films, but adds a quirky European sensibility to them. Her documentary short “Ferry Tales,” which turns the setting of the Staten Island Ferry Powder Room into a celebration of sisterhood, received an Academy Award® nomination in 2004 and premiered on HBO.

She is frequently commissioned for documentaries on American subjects for European audiences. Esson is invited regularly as a speaker and teacher at workshops, seminars and universities. She is the recipient of the 2007 Simon’s Fellowship of the Humanities from Kansas University and was nominated for the Rockefeller Media Grant.