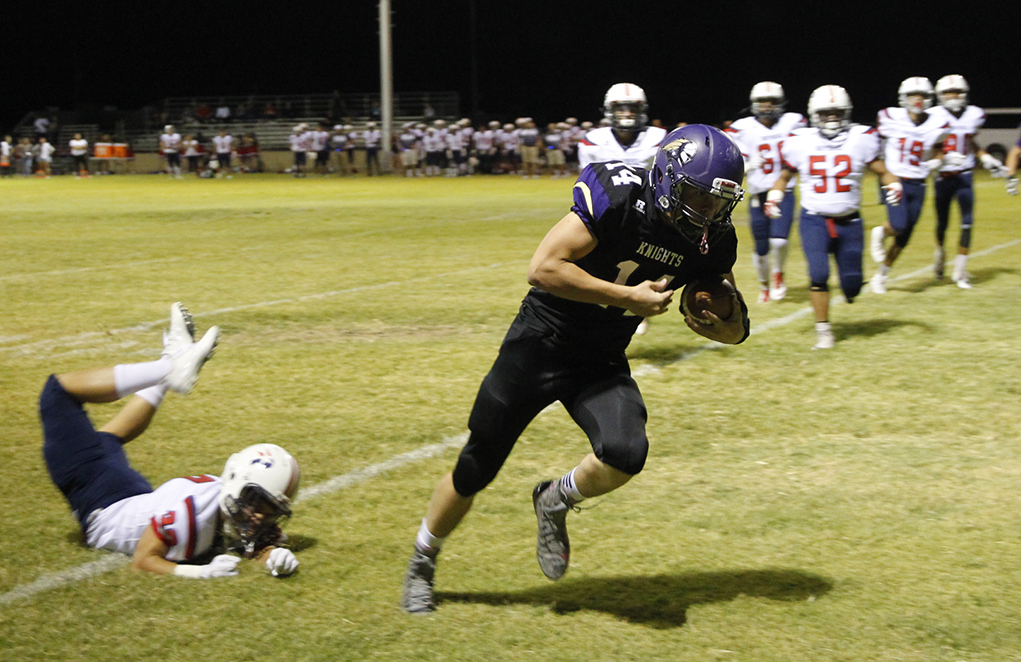 Friday night’s Lake Havasu High School football homecoming game resulted in a 39-23 win over the Independence Patriots. The Knights went into Friday’s game ready to dominate, and they did just that.

The first quarter got off to a slow start, yet the Knight’s defensive line was strong. Eventually, the Patriots scored a touchdown, but the point after kick was no good, making the score 0-6.

After a series of offensive bouts, No. 82 Kaleb Williams pummeled his way into the end zone for the touchdown. Following Williams’ touchdown, a 2-point conversion was completed by No. 14 Cole Wade. The Knights had secured an 8-6 lead over the Patriots. 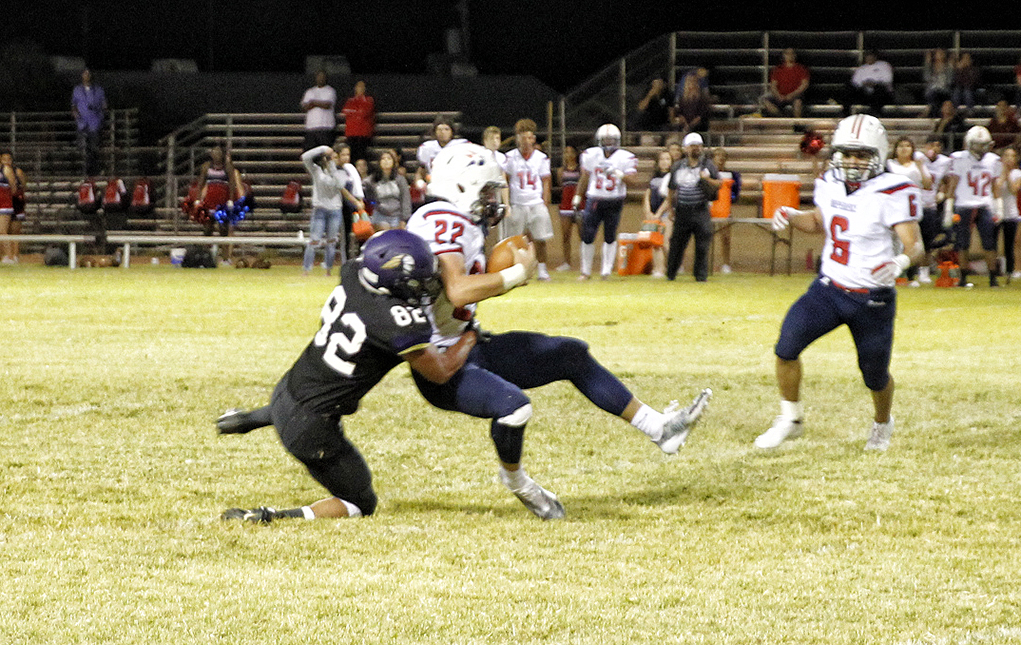 The Knight’s defense had a strong performance at Friday’s homecoming game to ensure a win. Knight’s No.82 Kaleb Wililams stops the advancing Independence Patriots with this takedown. Jillian Danielson/RiverScene

Throughout the whole first quarter, many key defensive plays had been executed by No. 55 Dustin Kloewer. Once the Knights had regained the ball, No. 12 Michael Lopuszynski barreled through the defense for another touchdown. The attempted 2-point conversion by the Knights failed, with the score at the end of the first quarter was 14-6 Knights.

Shortly into the second quarter, the Patriots scored another touchdown with a failed 2-point conversion. The Patriots trailed 14-12 to the Knights after the touchdown.

Before the Patriots knew it, No. 12 Michael Lopuszynski found himself back in their end zone, giving the Knights another touchdown, increasing the lead to 20-12. The attempted PAT failed, yet the Knights’ offense seemed to get even better as the game went on.

As the second quarter went on, No. 82 Kaleb Williams continued to take down any offensive threats in his path, racking up three sacks on the Patriots’ quarterback.

When the Knights’ offense came back on the field, Lopuszynski wound up darting through the defense into the end zone for another Knights touchdown, with the PAT being no good. 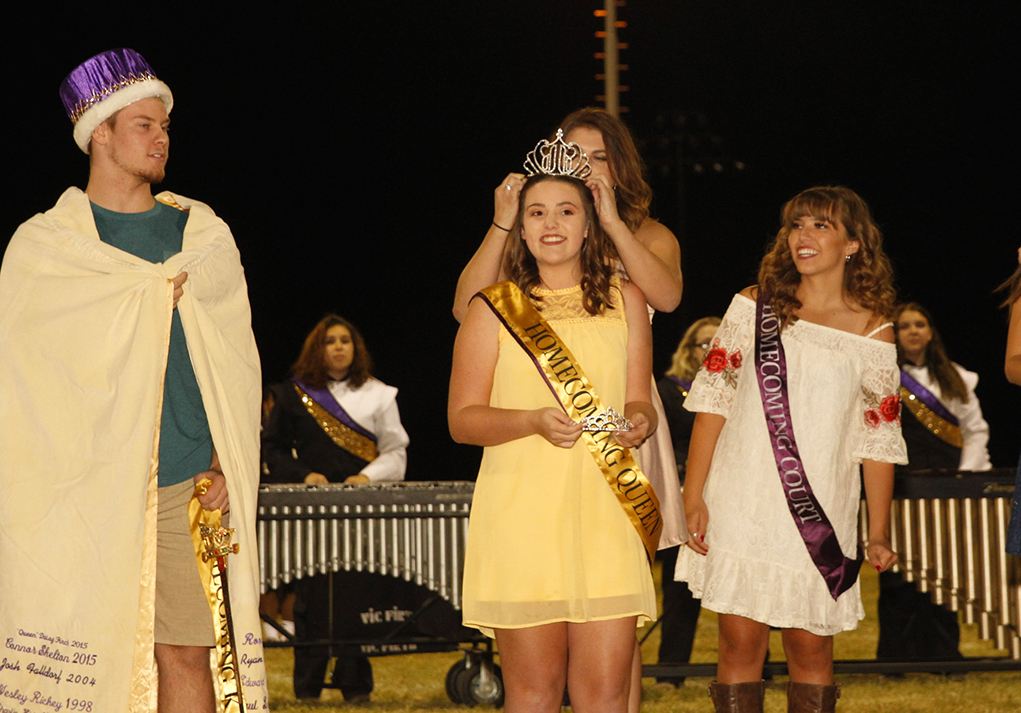 After the touchdown, the second quarter ended, leading to the halftime reveal of this year’s Homecoming King and Queen. The King was Jordan Erickson while Gabby Jones was crowned as Queen.

Coming into the third quarter leading 26-12, the Knights fought hard, scoring two touchdowns by Lopuszynski and a field goal kick by No. 10 Hayden Lintz, increasing the lead to 39-20 to conclude the third.

The fourth and final quarter was mostly uneventful other than an interception by No. 82 Kaleb Williams.

The Patriots scored a field goal  to change the score to 39-23 to end the game. 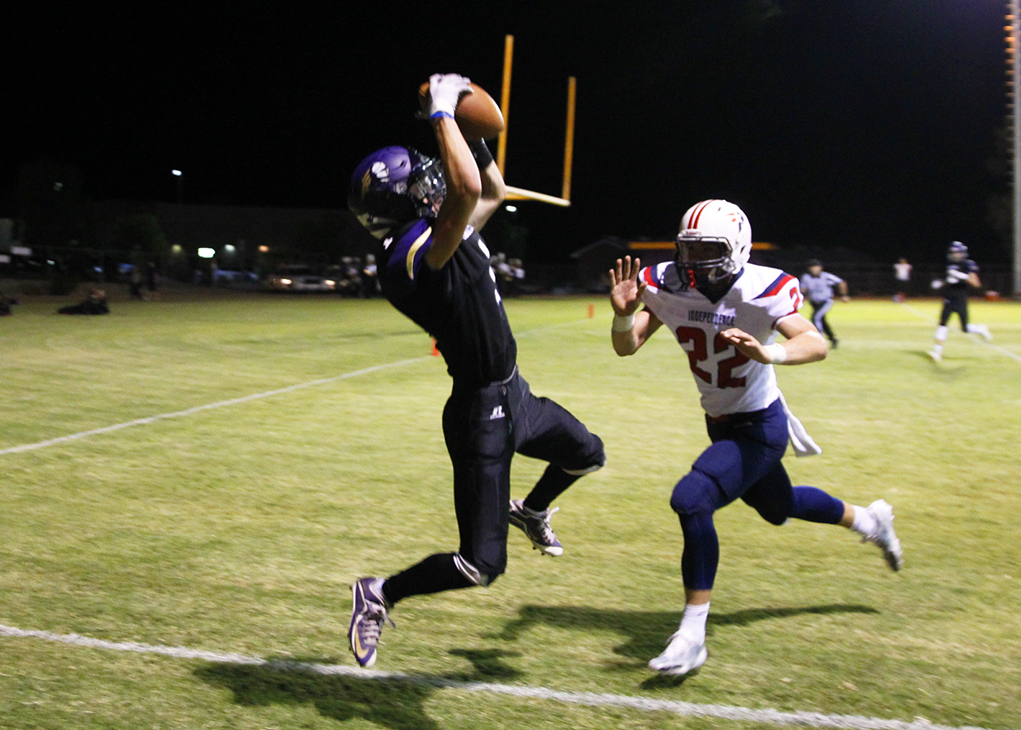 Knight’s No. 1 Jacob Schaffer fell just outside the chalk line in the end zone with this spectacular catch. Jillian Danielson/RiverScene