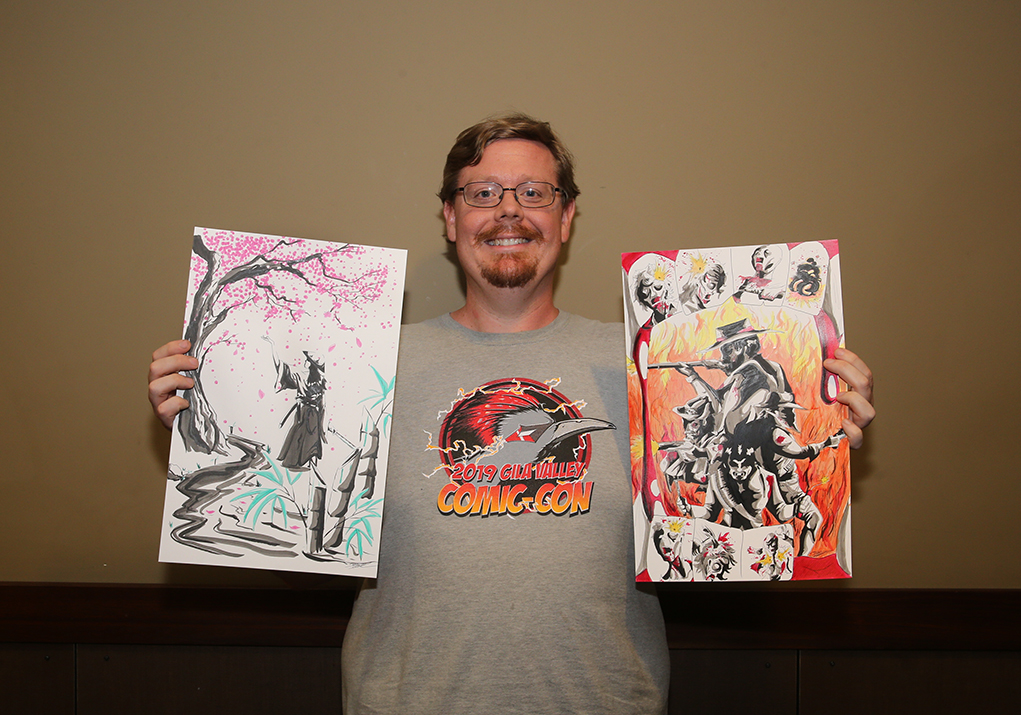 A massive dragon stares down at a small but brave knight. A samurai walks a lonely path through cherry blossom trees. An angel descends from the heavens above, his massive wings outstretched.

These are the characters created by local artist and comic savant David Bell Jr., who’s been drawing almost his entire life. The humble and intelligent artist sat down with Riverscene Magazine to discuss his budding career as a artist, and what led him to be such a talented artist.

Originally from  Harwood Heights, Ill., David Bell Jr.’s family moved him to Lake Havasu City when he was 5. Bell has been in his Havasu as long as he’s been in school, and considers himself a native Havasuvian. He’s been drawing throughout his time in school.

From an Early Age

“I’ve been drawing since I had a crayon in my hand,” Bell says.

His mother always encouraged him to be creative and pursue artwork, which led him to maintain the pursuit into adulthood. Bell’s father introduced him to comics as child, which further fueled his passion. 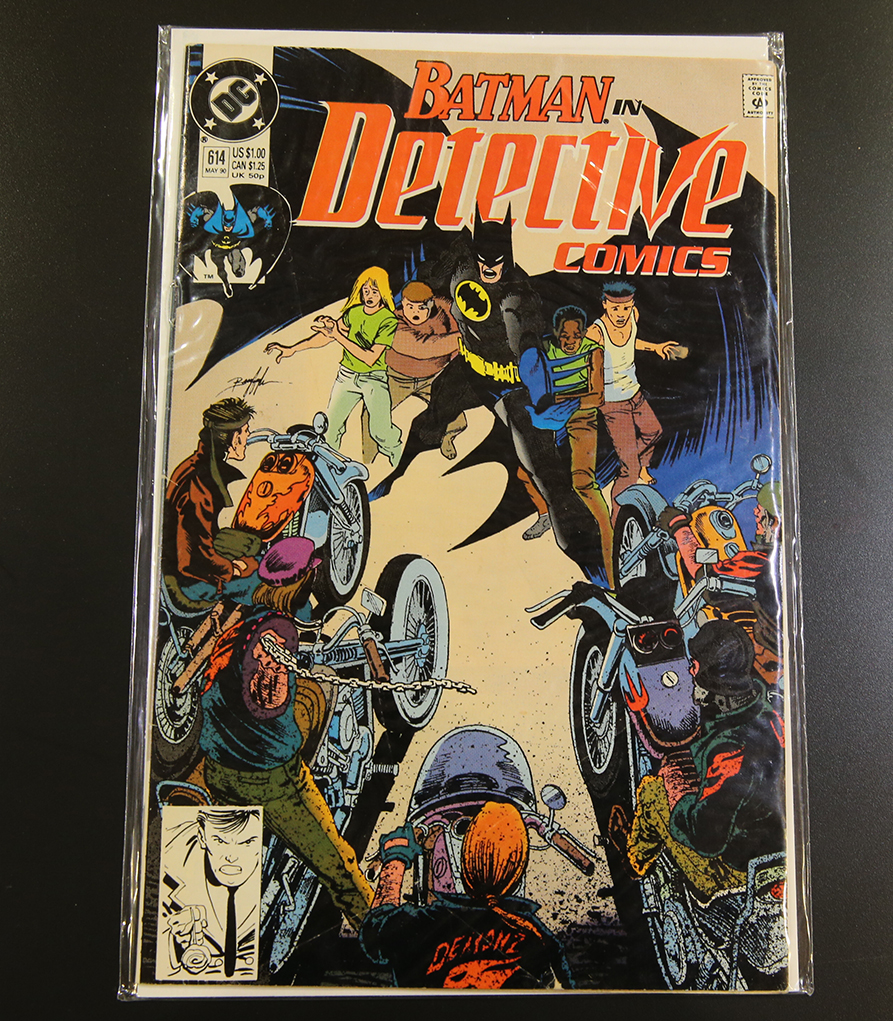 “‘Batman’ was the first comic my dad ever gave me,” Bell said as he showed us the first comic his father ever gave him. The Detective Comics are known for their introduction of the iconic Batman character, which is one of the comics his father gave him. Some of the greatest Batman stories of all time were written within the series, which ignited Bell’s passion for comic books.

“I didn’t really know the story of the comic but I remember loving the panel art and the illustrations.”

After reading his father’s first comic, the illustrator’s passion grew into a lifelong hobby. Thereafter, his enthusiasm for comics led him to continue reading comics throughout his life, which in turn inspired his art. His family were also comic fanatics, attending the famed San Diego Comic Con almost every year until he his high school. These experiences had a huge impact on Bell as an adult.

“I’ve been to Phoenix Comic Con as well, and my father runs the Gila Valley Comic Con.”

“’Cowboy Bebop’ is my favorite anime and I love ‘Dragon Ball Z’.”

As a constant fan of comics and animation, Bell decided to refine his artistry through art classes.

Bell began taking classes online through the Art Institute to learn more about drawing comics and increase his skill set. This is evident in his work, which already seem as if they’re transplanted from established publications.

“I finally sat down and said ‘I want to do this.’” 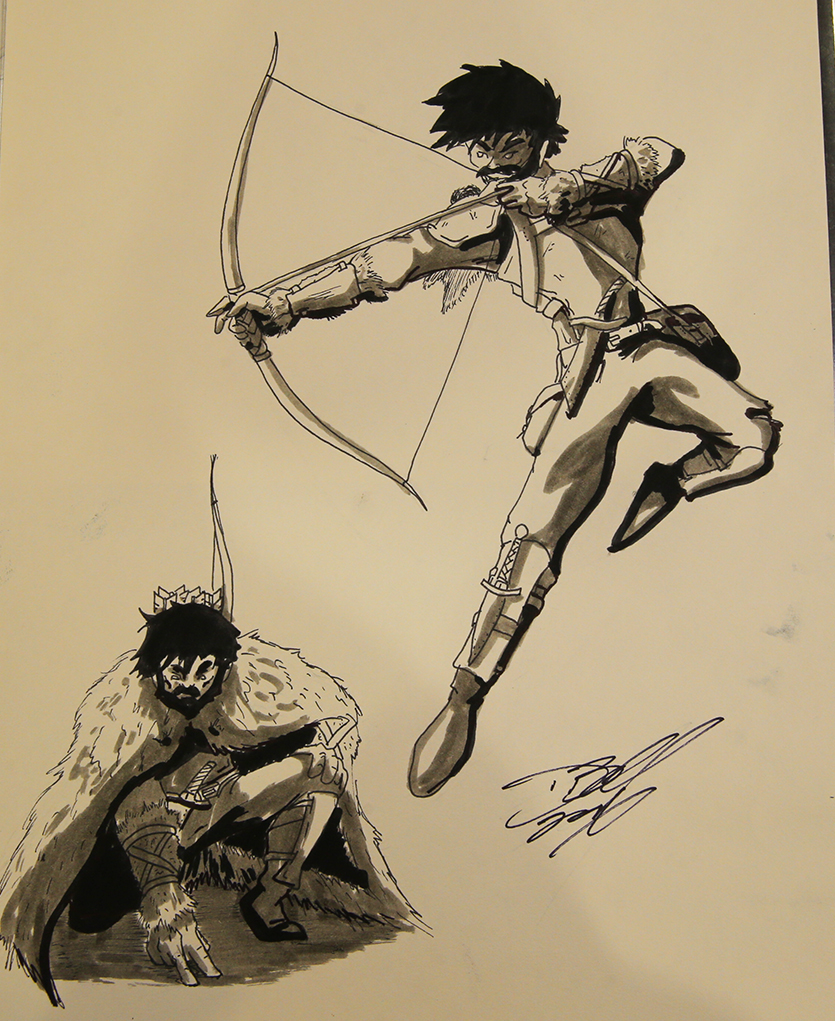 After gaining formal knowledge on his craft, Bell began drawing more, and soon saw improvement in his work. The artist held onto old high school sketches to document his evolution. While David may seem humble about his growth, the sketches speak for themselves. Much of Bell’s art looks like it belongs to the series he’s been inspired by, and could easily be confused with the actual animators and illustrators of the famed characters.

A Flair for the Fantastical

The Havasu artist is also a Dungeons & Dragons fan, and participates in Dungeons and Dragons campaigns within Lake Havasu. The popular tabletop role-playing game has been a staple in his life, and he also draws inspiration from it.

“I’ve drawn a few panels based on D&D characters and campaigns,” Bell tells us as he showcases his artwork. One panel, an intricate scene involving a zombie apocalypse, was created based off a D&D campaign. 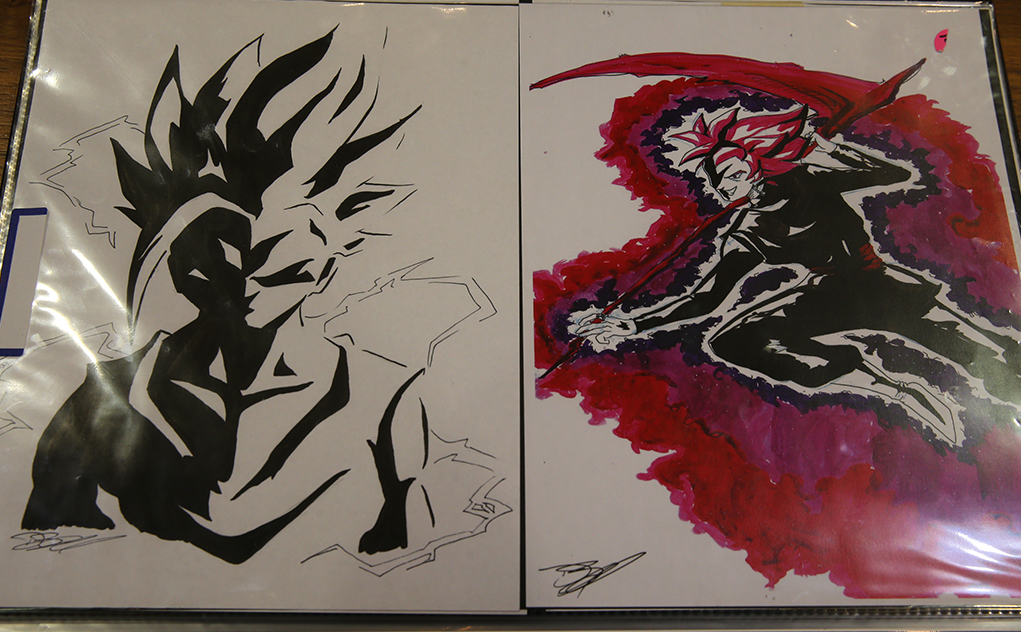 “Sometimes I play a fantasy instrumental or watch a movie involving whatever character I’m drawing, just to have it on in the background. They inspire me.”

While the Havasu artist creates his own original work, he also uses his talent within the Lake Havasu Community.

Bell also draws for the kids he works with at Parks and Recreation. Bell says he’s drawn everything from a fat unicorn to comic book characters. He loves teaching children how to draw and informing them about art.

“It’s fun because it can be informative and challenging. It gets me out of my comfort zone.”

Bell’s recent stint at the Gila Valley Comic Con allowed him a table to showcase his artwork. He recently began selling his panels, or prints, to Comic Con attendees and fans of his work.

“I was just honored to have a table,” Bell says excitedly, “It’s nice to actually be a part of something I’ve grown up in my entire life.”

Now that he’s sold his panels at a Comic Con, the artist plans on creating his own comic book. He is currently working on his own original script for his debut comic. David is also open to working for a major publishing house such as DC or Marvel. He’s also open to working with gaming studios to be a concept artist or a character designer. However, David Bell Jr. would also like to work with one of his favorite comic book companies, Image comics.

“They don’t have any editorial interference. They let the authors create their own works.”

David’s father has a good working relationship with Image Comics through his Gila Valley Comic Con. The company is known for backing influential comics books such as a “Spawn” and “Bone”, and also the famous The Walking Dead comic, which created the wildly popular television show. Hopefully, David Bell Jr. will become one of the creators of a popular comic line himself.

David Bell Jr’s art can be found and purchased from his website, rhinosdenart.wixsite.com, or on his tumblr, @rhinosdenart.tumblr.com. You can also find him on Facebook and Twitter @rhinos_den_art.