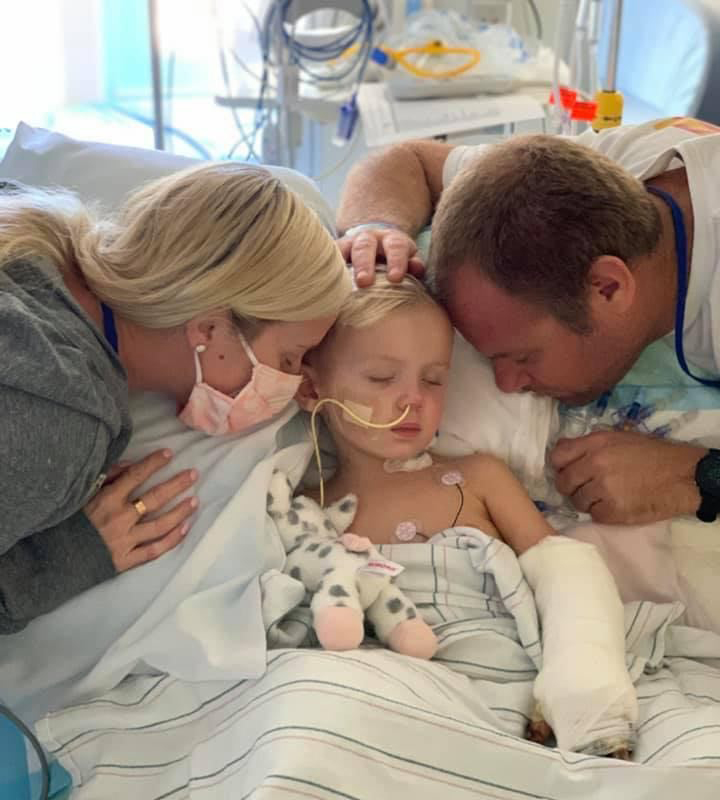 A change of location for a long-planned camping vacation for a Lake Havasu City family may have been a blessing after all for their 3-year-old son, Beauden Baumkirchner. 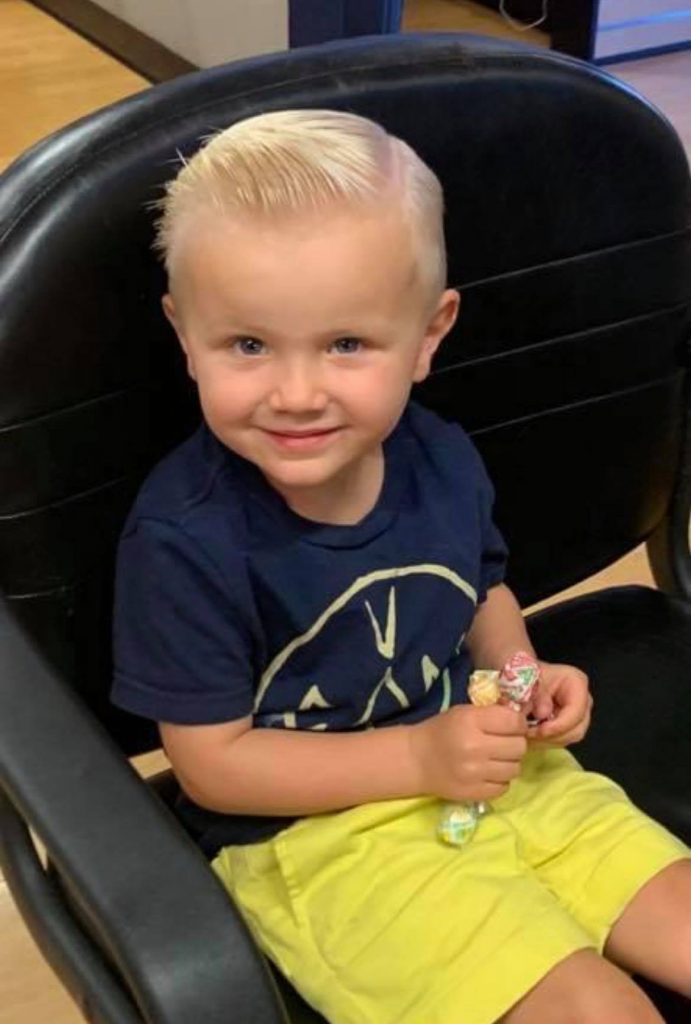 “For months we had planned to be a little north of Santa Barbara at a campsite in our motorhome with another family. Last minute, literally a few weeks before our trip, with campgrounds at max capacity all over, I decided to find one in San Diego thinking the skies would be more clear and less smoky here,” mom Juliana Baumkirchner said in an email.

“So, I changed plans for our family and our friends, and they were totally cool with it. God led us here and changed our plans for us because Rady Children’s is one of the best in the country with the best infectious disease team. It’s crazy. We are so in the right place!

The reason the reference to Rady Children’s Hospital is explained by what happened to the Baumkirchner family next.

“We arrived to Mission Bay RV park on Oct. 5. We had waited for this camping trip with our sweet friends for months. We were feeling pretty awesome about the last-minute change!

We had a blast on the 5th and let the kids stay up late. He (Beauden) did fall that day outside though and scraped his knee pretty bad. But nevertheless, they had such a blast that day. Beauden even asked if it was bedtime yet towards the end. Strange,” Baumkirchner said.

Beauden reportedly slept that night next to his parents. 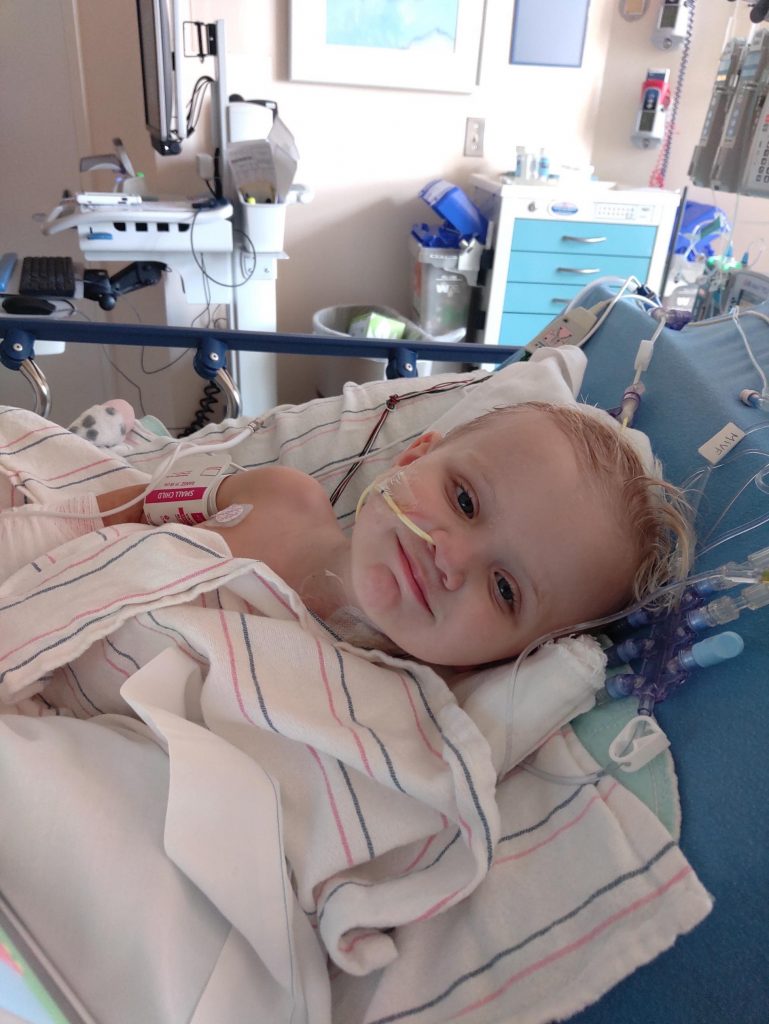 “I felt him burning up. He was on fire. What do you do when your kid is on fire? Tylenol/Motrin. The next day he woke up by throwing up a little. Then he was lethargic on the couch all day with a fever we were watching. He didn’t talk at all that day accept when he needed to tell us to go potty. He held his foot a lot throughout the day. That night it seemed like his leg was hurting. He had a hard time moving himself around in the bed and would use his upper body strength to move.” And that was just the beginning.

Baumkirchner said she had planned to take Beauden to an urgent care the next day for an examination and perhaps an X-ray of his knee.

“The next morning, I waited and waited for urgent care to open. When it was 8, I called and described his symptoms. She suggested to take him to Rady right away. That would be Blessing #2.

“We noticed in the car his lip was swollen and his knee was swollen as well. It was around 9. They took us right into ER. In a matter of minutes, he had IVs going. But before that, they took him back for an X-ray (after he took the COVID-19 test). He was a limp little noodle on the X-ray table.” 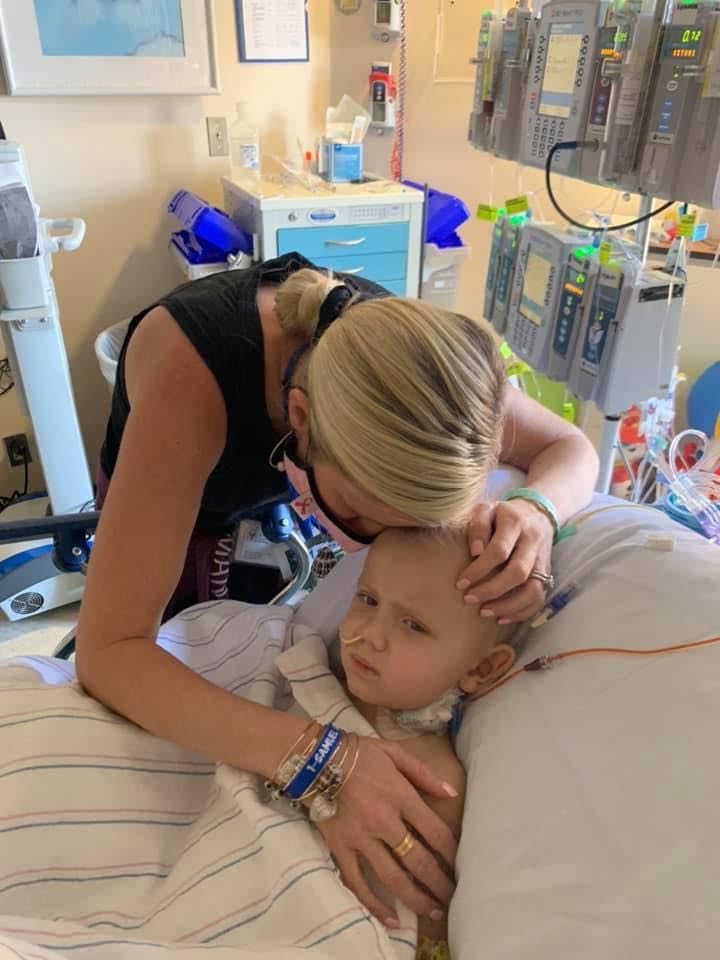 After doctors collaborated on Beauden’s condition, and the infection was visibly spreading, Baumkirchner said it was determined he would be taken to the Intensive Care Unit.

Several anxious moments since Beauden’s first day in ICU, many have said they have been surprised he made it after the first 48 hours. “For sure Blessing #3,” Baumkirchner said.

“We don’t know if it was in his system already or if it literally was caused from when he fell and scraped his knee.”

Fast forward to Nov. 2. Surgery was performed to amputate both of Beauden’s legs below the knee. And then on Nov. 5, doctors went back to check how that surgery went and had to amputate more. The left is at the knee joint. The right is above the knee. 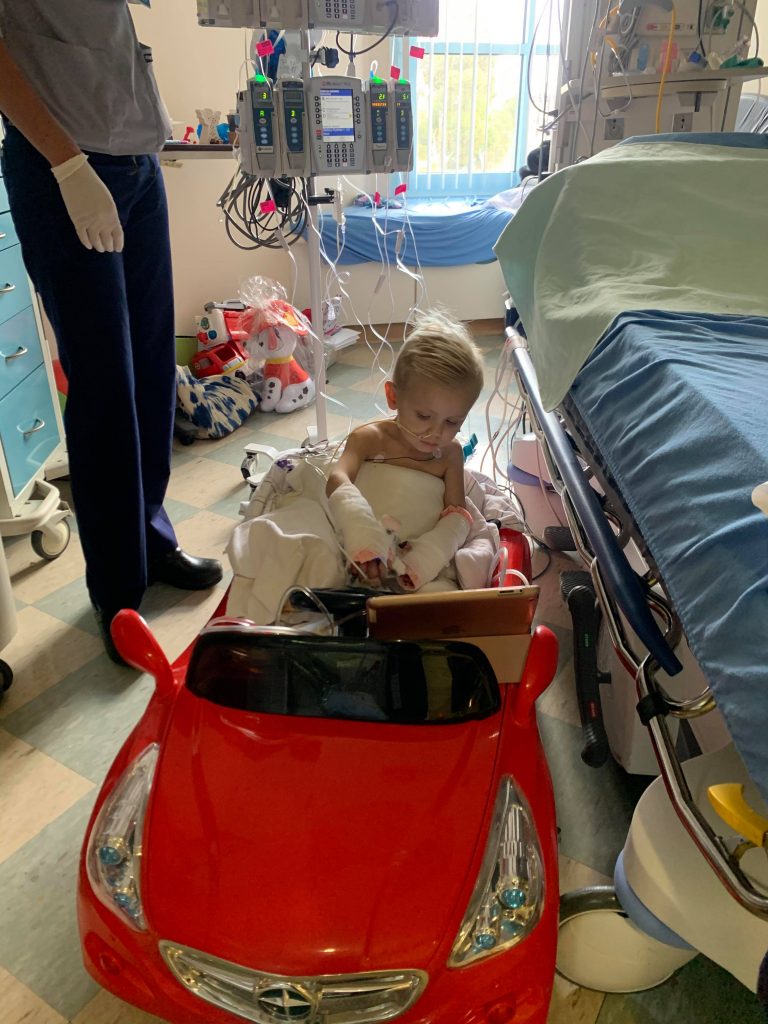 Beauden learns to move around in a car owned by the hospital after his legs were amputated. photo courtesy Juls Baumkirchner

“During that surgery, a couple fingers from his left hand that were really bad, fell off.”

Beauden has since had yet another surgery to determine how the last one is progressing and if skin grafting can be done.

Baumkirchner said that today, Nov. 10, was Beauden’s 15th surgery since this ordeal began. 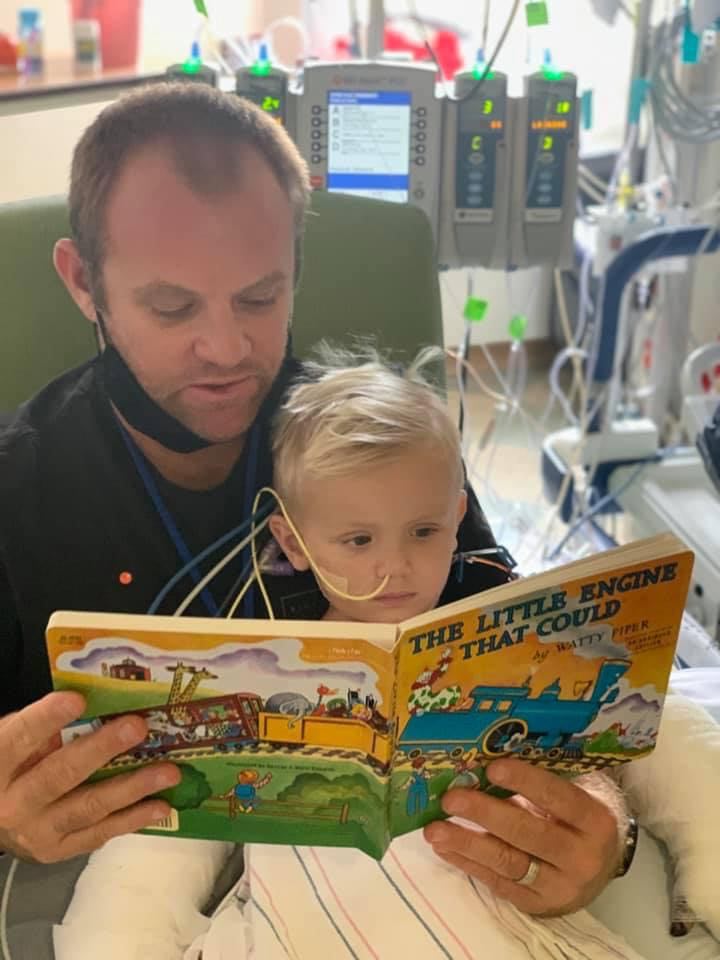 The Baumkirchner family, of course, is reeling from what they’ve been through over the past many weeks.

“We have been separated from our 6- and 8-year-old daughters this whole time as they wanted to continue going to school at CCA (Calvary Christian Academy in Lake Havasu City). I’ve had a friend bring them out twice to visit us,” Baumkirchner said.

Baumkirchner said the family is so grateful for the support and caring that’s been shown by the Lake Havasu City community. 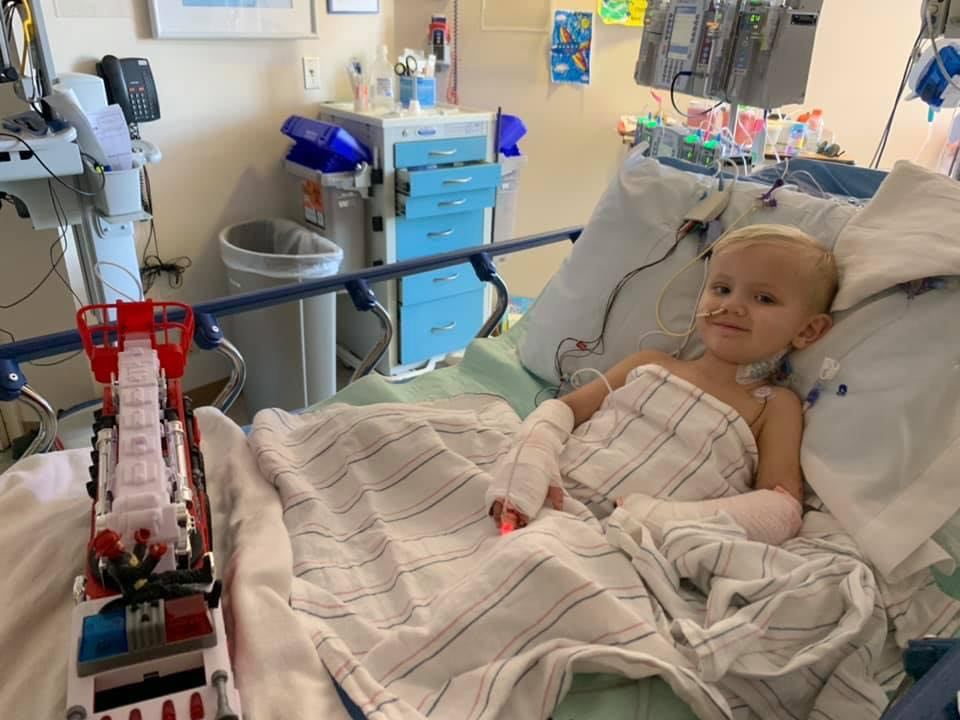 Beauden lays with a firetruck that was given to him. photo courtesy Juls Baumkirchner

One example of support was sent to Beauden by the Lake Havasu City Fire Department in the form of Marshall of the Power Patrol – a giant fire dog stuffed animal. After that the LHFD spoke to the San Diego Fire Department and the brought a hat and shirt to Beauden. “There have been so many strangers sending cards and gifts and contacting us with encouragement,” Baumkirchner said.

A Go Fund Me page has been set up by a family member to help raise funds to help the family with expenses. Visit the page to donate at www.gofundme.com/f/3-year-old-beauden. Donations are also being taken at Foothills Bank under the name Beauden Baumkirchner. 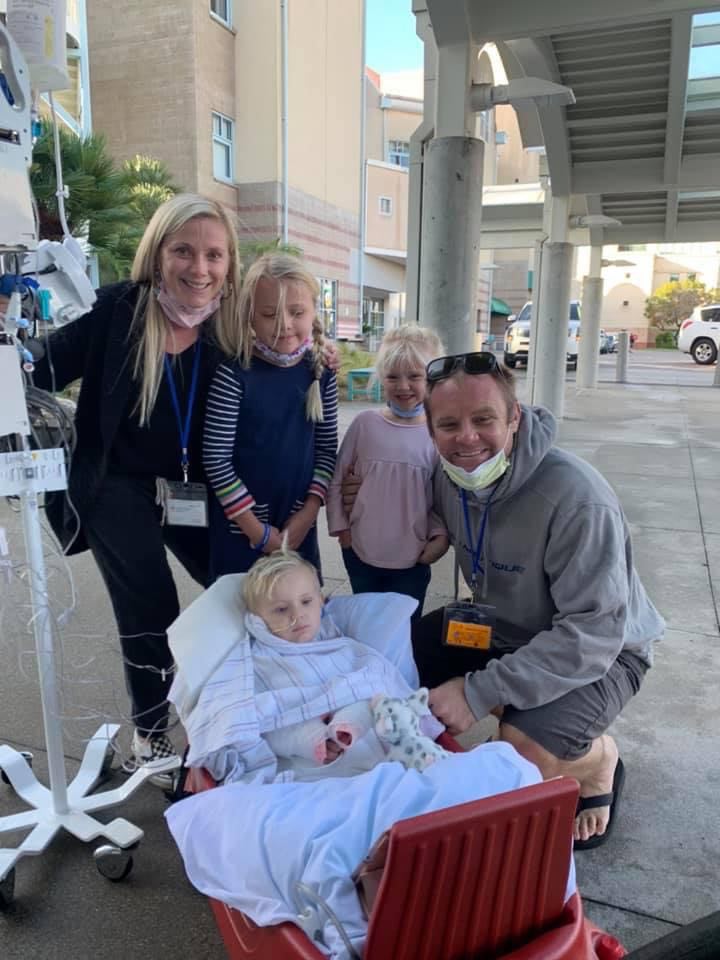 Juls, Brian and Beauden Baumkirchner spend time with their girls after a family friend brought them from Lake Havasu to San Diego for a visit. photo courtesy Juls Baumkirchner 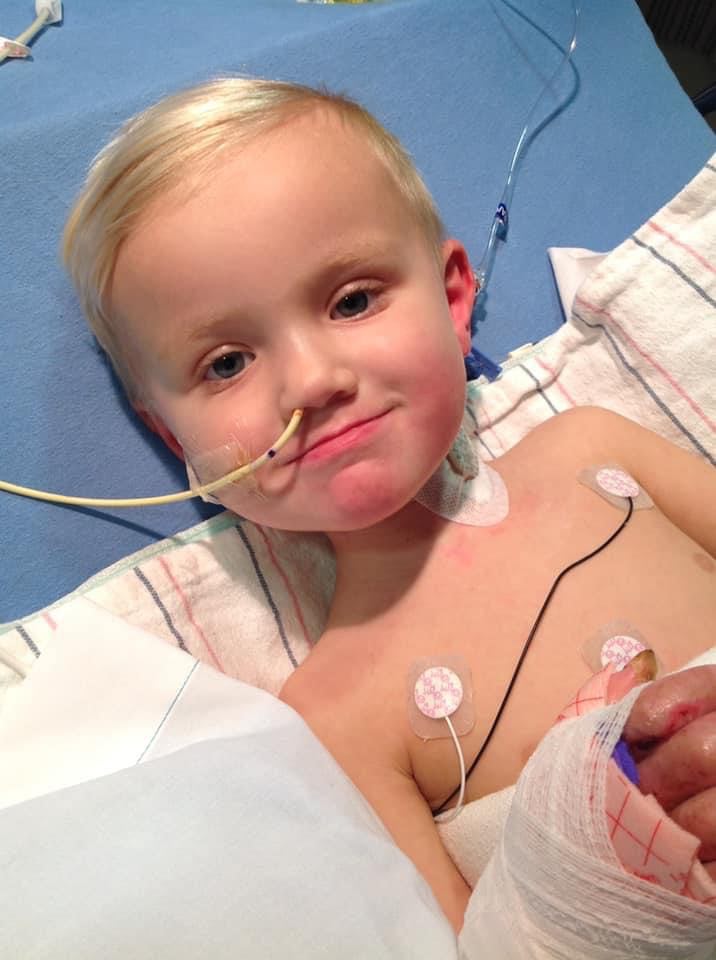 In the spirit of Thanksgiving, Shugrue’s is currently holding a wine raffle to benefit the Baumkirchner family. The raffle consists of five magnums valued at over $500, which was donated by Steve Judd.  Raffle tickets are available for purchase at Shugrues host desk and  are $20 each or six for $100.  The drawing will be held on Tuesday, November 24th.