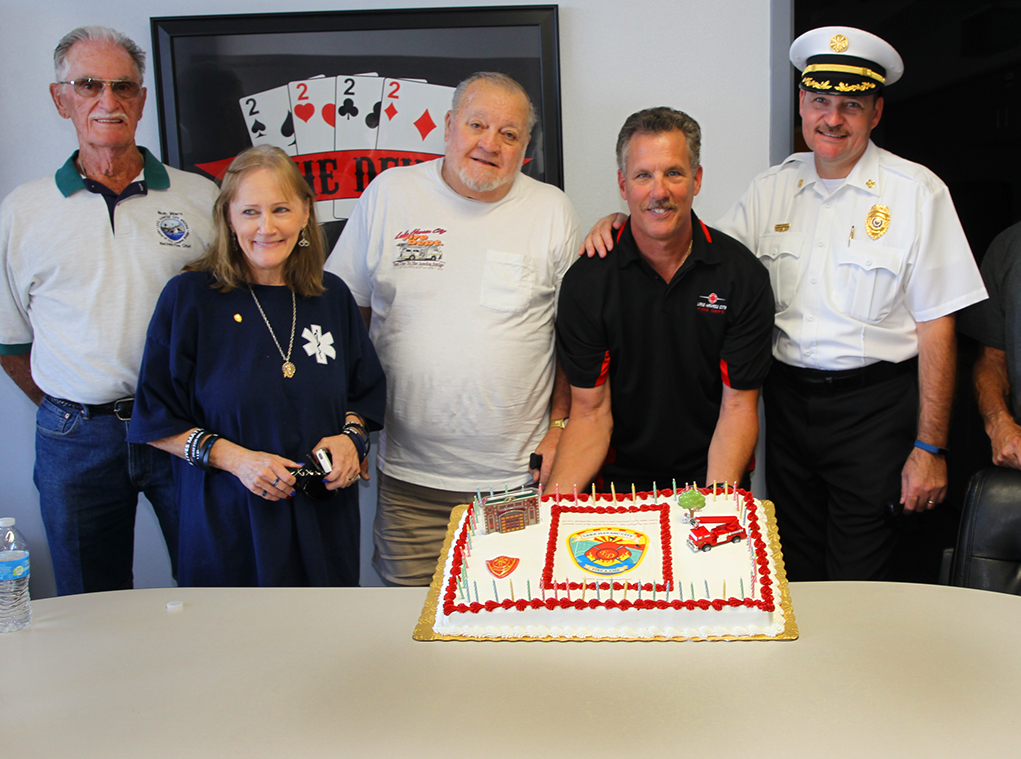 The Lake Havasu City Fire Dept. is over the hill after celebrating the milestone during an open house on Saturday at Fire Station No. 2 on Kiowa Boulevard. During the event, a few old-timers opened up to build a timeline.

“McCulloch Properties originally bought a 1942 Seagraves Surplus truck and it was at the airport,” said Ernie Smith, 78, who was Havasu’s fire chief from 1970 to 1980. “They were flying people in, and there was no fire protection for the city. The problem was that it was not being maintained and no one was trained on how to drive it.”

In 1966, a petition was circulated and on Aug. 11, the Havasu Volunteer Firefighter Co., was formed by the unanimous vote of 37 registered voters. The city’s population was estimated to be between 1,000 and 1,500 citizens.

“I started as a volunteer firefighter in 1968,” Smith said. “When I came here, it was nothing but dirt roads. Everything was new here, there were very few fires. There were a few car fires and medical calls but there were only five or six fires a year, nothing big. There was no ambulance. Carlton Fraze used his hearse as an ambulance and we’d transport to the Needles hospital.” 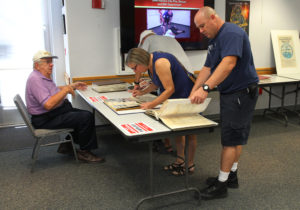 Fellow former volunteer firefighter Fred Grover Sr., 87, said he went right down and signed up after moving to town and was onboard from 1969 to 1975. The protective gear was a full-length coat, helmet and boots. In all, there were about a dozen volunteer firefighters, the two said.

In the beginning, there was one pickup truck, and one old Mack fire engine – both were owned by McCulloch Properties Inc.

The equipment was staged at Baxter’s Chevron service station, which today is the empty lot at McCulloch Boulevard and Smoketree Avenue. It was from Baxter’s the firefighters responded to emergencies. Three years later, Havasu’s first fire station was constructed by the firefighters themselves, it was 1969. Today, it remains on Lake Havasu Avenue and currently is operational as Fire Station No. 5.

Back in the day, there was an air horn mounted on the side of Baxter’s, and an answering system in place that would alert someone. That someone would respond to Baxter’s and blow the horn.

“The first man there drove the truck,” Grover said. “If you didn’t get on the engine, you’d drive your car behind the truck until you found the fire.”

While reminiscing, Grover said once he entered a burning home in Crystal Beach to save a baby that wasn’t there. Another incident was a big fire at an apartment complex. During the interview, Grover found an old yellowed newspaper clipping from among the department’s scrapbooks depicting the incident. The fire occurred April 19, 1973, at Piccadilly Apartments, according to the article.

“I was on the golf course and I could see the smoke,” he said.

When the Havasu fire district turned into the city’s fire department upon incorporation of the city in October 1978, there were four fire stations, six engines, one ladder truck and everything was paid for. At the time, Havasu’s fire district was number one in the state with its lowest tax rates, Smith said.

“I think we’ve all done a great deal,” Smith said of the department’s lineage. “The EMT/paramedic program, that’s been the greatest asset.”

From dirt roads, one doctor, 1,000 citizens, and the nearest hospital being 42-miles away –  to all that comes with a prospering community of about 52,000 people, Smith has seen Havasu grow from its infancy.

“I think it’s fabulous,” Smith said of the fire department’s progress through the years. “The town has grown substantially so the department had to keep pace.”

OPEN HOUSE
The open house had the department’s finest equipment on display including battalion chief trucks, Rescue 42, the ladder truck, retired Fire Engine 704, and the original Island Airport Fire and Crash vehicle. Lake Havasu Community Emergency Response team was out in full force for the event, too.

Community education specialist Gina Gutierrez was on site with fun stickers, pencils, and other items that promote fire prevention and safety among the city’s youth. And many Havasu firefighters turned out to interact with the public over a hotdog or two. 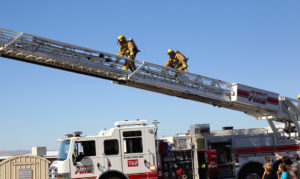 The firefighters provided two demonstrations of their response techniques that had eventgoers watching them enter the property’s smoking tall training tower.

In the firehouse’s classroom, there was a grand collection of scrapbooks with pages of newspaper clippings about incidents, and the growth and challenges of the fire department. There were photo albums and a televised photo gallery showing the fire department and its firefighters through the years.

Halfway through the event, three former Havasu fire chiefs joined current Havasu Fire Chief Brian Davis to pose for a photo with the 50-year commemorative cake that was donated by citizen Veronica Forston.

Many children had the opportunity to play firefighter at the event’s water play station where they gleefully took their turn at the front of the hose. Local firefighters assisted the youth with twisting the nozzle, adjusting the water spray and aiming at the targets. 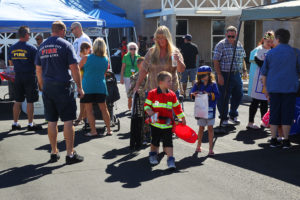 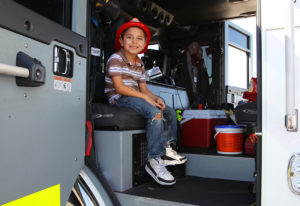 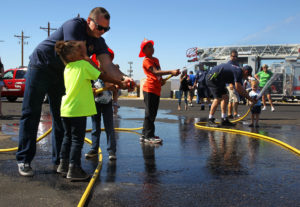 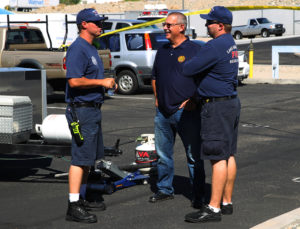 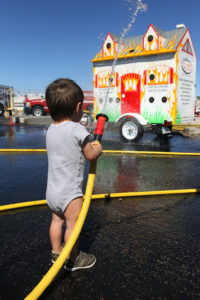 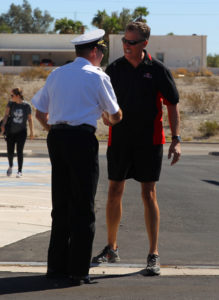