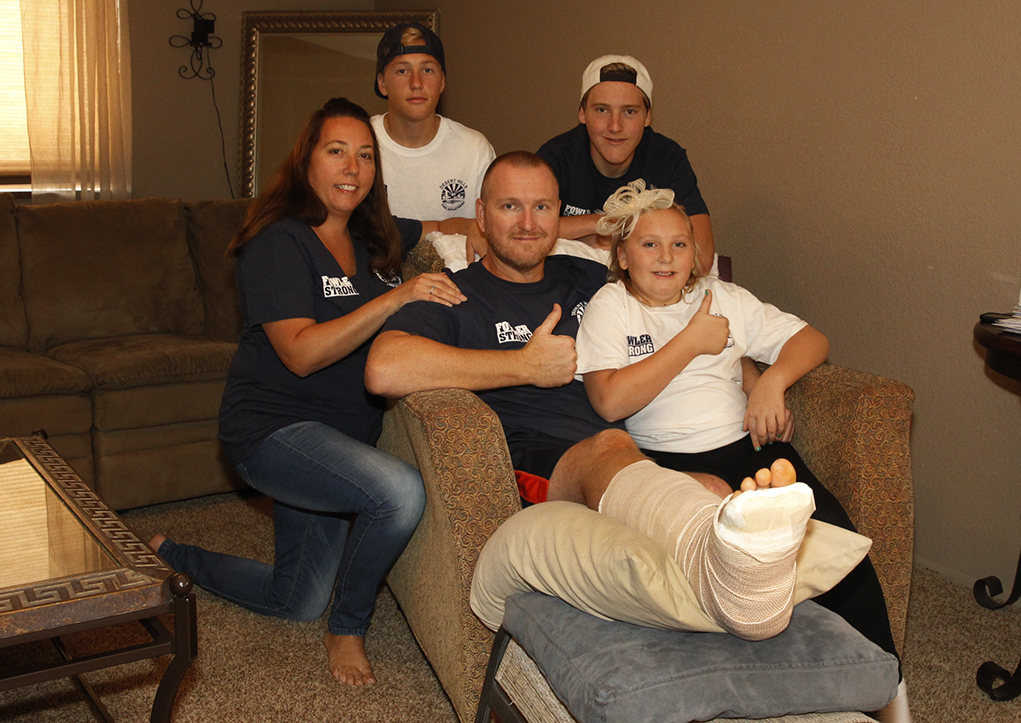 This is an exclusive to RiverScene Magazine.

Two weeks ago, Kurt and Trina Fowler’s entire lives were turned upside down when a shooter opened fire on the Las Vegas Route 91 Harvest country musical festival they were attending with family and friends.

In their first quiet moments at home since that night, they recounted their story. 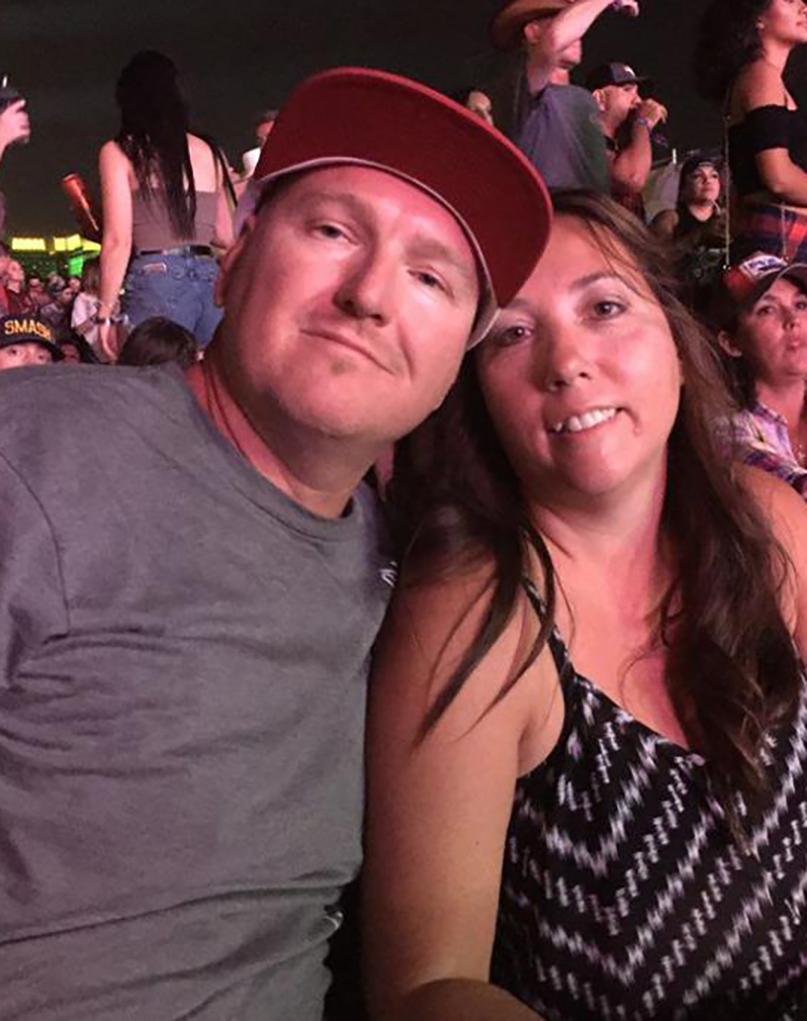 “When the bullets started flying, people were saying they were fireworks,” said Trina. “I just knew. I knew the minute I heard it that it was bullets. I remember I started to run, and Kurt pushed me down and put his hands over my head and made sure his body was covering mine, and then he said he’d been hit. I remember I started to run not even realizing I was barefoot. I had left my shoes in the grass at the concert”

Kurt, a Desert Hills Fire Department firefighter, was shot in the leg. His tibia and fibula were completely shattered, but even with a horrific leg injury, his only thoughts were of his wife.

“First and foremost, I wanted to make sure that one of us got home to our kids,” said Kurt. “My wife is the backbone of our family, so she had to make it home.”

“I ran (barefoot) with bullets flying to my back,” Trina said. “I have never run so fast. I remember not being able to breathe, and I remember stopping at one point because I was so tired, and I told myself, ‘you can’t stop. You gotta go.’ And I ran and was just banging on car doors begging them to let me in, until one couple let me in.”

With Trina out of the facility, Kurt began to focus on himself.

“You either move or you die,” Kurt said. “After Trina started running, I knew I had to get myself home as well. I went into saving myself mode, because I knew that if I didn’t get to safety and fix my leg I could die.”

Kurt crawled under the sound stage, where many other concert goers were hiding as well.

“A lot of credit goes to a guy under the sound stage who helped me create a tourniquet to stop the bleeding in my leg,” Kurt said. “Him and I were able to create a pretty secure tourniquet out of a shirt, which is not an easy thing to do.”

Once the shooting stopped, Kurt had to again crawl, making his way out from under the stage, where a few people helped carry him into an awaiting truck that took him to a nearby hospital. While en route to the hospital, Trina was finally able to make contact with him.

“Everybody in the truck was with somebody they came with, except for me,” said Trina. “I asked if I could borrow their phone, and I called Kurt and he answered right away. He told me he was on his way to the hospital. I called other family members, and I found out they were all alive. I called Kurt again, and he told me he had made it to the hospital, and he was in a hallway, and the doctor had told him that if he didn’t have surgery within two hours he could lose his foot, possibly his leg. He was so calm, and he said, ‘Trina there’s 40 people in front of me.’”

Even though Kurt was under the best care possible given the situation, Trina was still not in the clear yet. The couple driving the truck pulled onto the I-15 freeway, which was completely gridlocked. They waited in the traffic for almost half an hour, before deciding to get out and walk. Together, Trina and the couple walked along the freeway, until they were picked up by the woman’s parents, who then took her to Kurt’s parents’ house, where she told them that Kurt had been shot.

At the house, Trina was relieved to find out her brother, Travis Holden, was alive.  After the shooting broke out, Travis made multiple trips in and out of the facility rescuing as many victims as he could, and then made his way into the hospital to be with Kurt.

“He somehow got into the hospital,” said Trina. “He was covered in blood from trying to save people, and so he kinda walked in like he was hurt and he was able to stay with Kurt until I was able to get there the next morning. I was terrified to leave the house. I didn’t want to get into a car.

Trina arrived at the hospital around 11 a.m., and Kurt had surgery at 2 p.m. Unfortunately, the hospital he was taken to was a non-trauma hospital. The hospital, “did the best they could,” but two inches of Kurt’s tibia was shattered, and his leg was riddled with bone and bullet shrapnel, which made surgery difficult. Kurt was eventually transferred to another hospital, for higher care.

“We’re not out of the woods yet as far as infection and all of that.” said Trina. “His leg was so swollen that the wound opened back up after surgery, so it’s going to take a while to get that to heal and close up. Until that happens, there’s no talk or discussion about physical therapy or other surgeries.”

Along with monitoring the wound’s healing, Kurt will also meet once a week with and orthopedic surgeon.

“I can’t put any weight on my foot for a minimum of two months,” Kurt said.

With Kurt’s injuries keeping him home, his fire department family has jumped into action physically, emotionally and even financially.

“The guys were at my bedside that night,” Kurt said. “We had seemingly every fire department come visit. Havasu Fire, Phoenix Fire, Desert Hills Fire, Vegas Fire, Clark County Fire, Henderson Fire. We even had a representative from New York Fire there. And they’ve been there for our kids as much as us, they brought our kids [to the hospital] and brought them home.”

Trina added, “the [firefighter] brotherhood is out of the world.”

Along with providing emotional support, the fire department put together fundraisers to help cover medical expenses and Kurt’s salary.

“They set up a Go Fund Me, they did a pancake breakfast, and the T-shirt fundraiser,” said Kurt. “They’re doing whatever it takes to make sure my paycheck is there on Friday.” 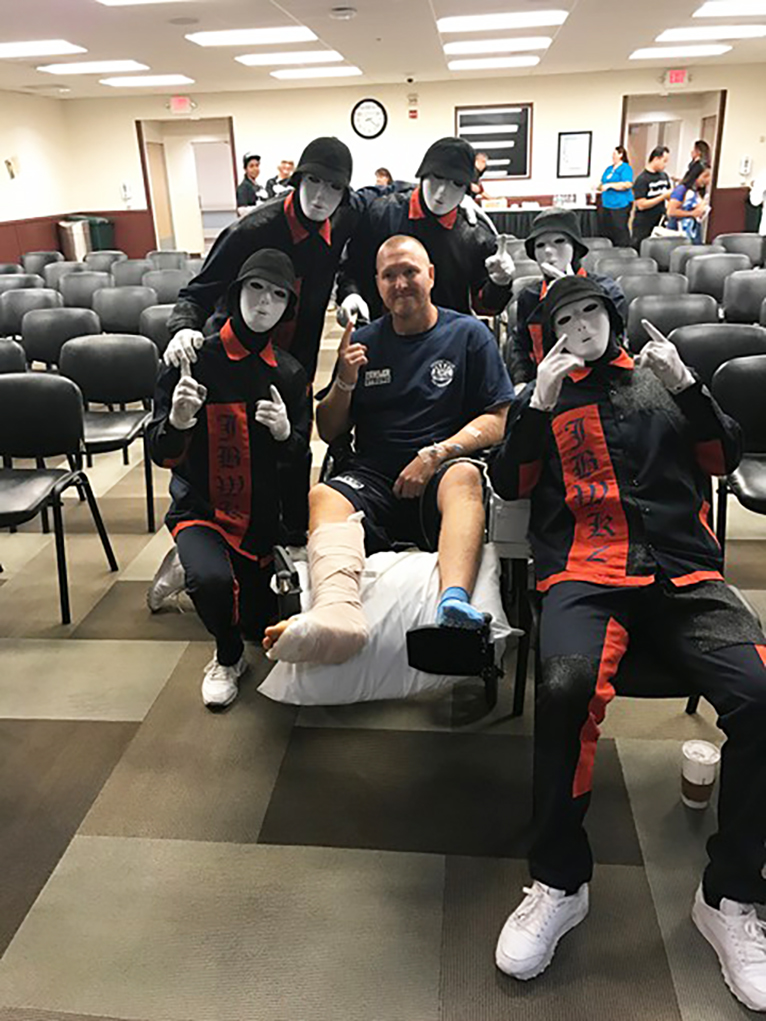 While in the hospital, Kurt was visited by the dance group, The Jabbawockeez. Kurt also received a Skype message from Trina’s favorite singer, Reba McEntire while in the hospital and a visit from country singer Matt Farris. photo courtesy Trina Fowler.

Mudshark Brewery, Burgers by the Bridge, Star Cinemas, Innovative Health and Wellness and many other local community members have all stepped up to help raise funds for the Fowler family. Even the Yucca Fire Department has organized fundraisers to help.

Trina, who regularly updates the community on Kurt’s injuries in the popular Facebook group Havasu Orchids and Onions New and Improved, receives upwards of 600 likes on every post she makes.

Kurt and Trina are extremely grateful for the support they have received from Lake Havasu.

“We want everyone to know there are no words that can express the gratitude we have from the outpouring of everybody,” said Kurt. “There is no way to show it. We will do our best to reach out to each and every person.” 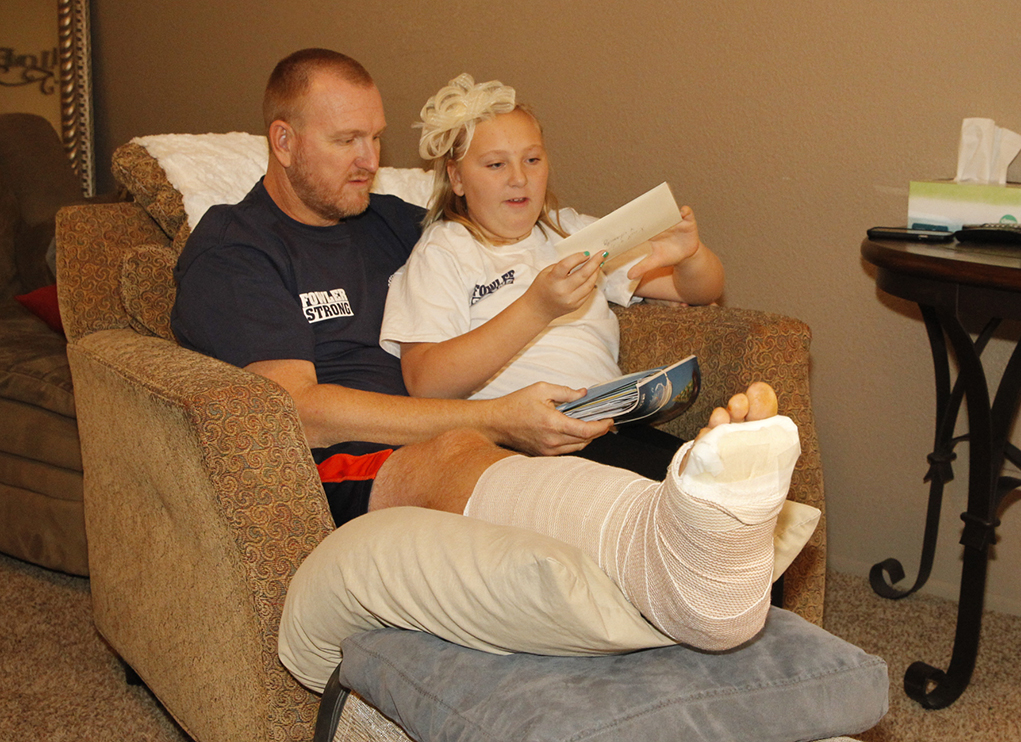 Kurt and Timori open cards that were given to them. Jillian Danielson/RiverScene

“This tragedy has left a hole in my heart,” Trina said, through tears. “There will always be a hole in my heart for what has happened and I will think about the families that are suffering every single day. But I also see the good. I see how people were able to come together under such tragic circumstances and grieve together and love together. Living in this community, with all of these people, has made it so much easier. We really are so blessed to be surrounded by such incredible, caring and kindhearted people. To be a part of this community, what more could you ask for? It makes me want to be a better person.”

“If I could hug every person that has messaged me, prayed for my family, reached out to us in anyway, I would. I would hug every single one of them,” Trina said. “Even the people I haven’t met, it doesn’t matter. I feel a connection with each and every person. The outreach and outpouring of love and support, I do really believe that is why we’re here. That is why we were able to finally come home. All of those prayers and positive vibes, that’s what does it. It really does.”

Despite the tragedy their family has lived through, Kurt and Trina remain optimistic for the future.

“The end result is to heal up 100 percent and go back to my normal life of camping, boating, hiking, soccer, and motocross with my wife and kids,” said Kurt. “I will eventually walk through the doors of the fire station and set foot back on the engine, so I can get back to doing what I do and help people.”

The couple is even able to joke about Kurt’s extended time off work, which will have him home for the holidays.

“I’ll be off on your birthday,” Kurt said to Trina.

“Too bad you can’t take me anywhere,” she laughed. 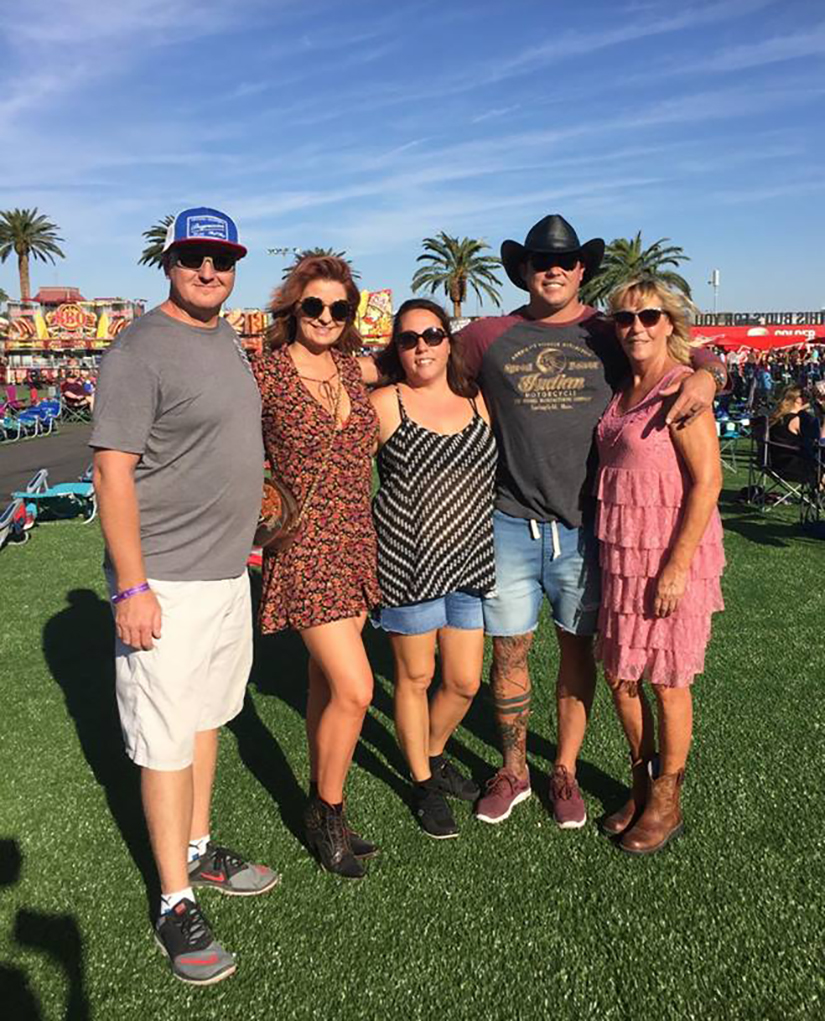 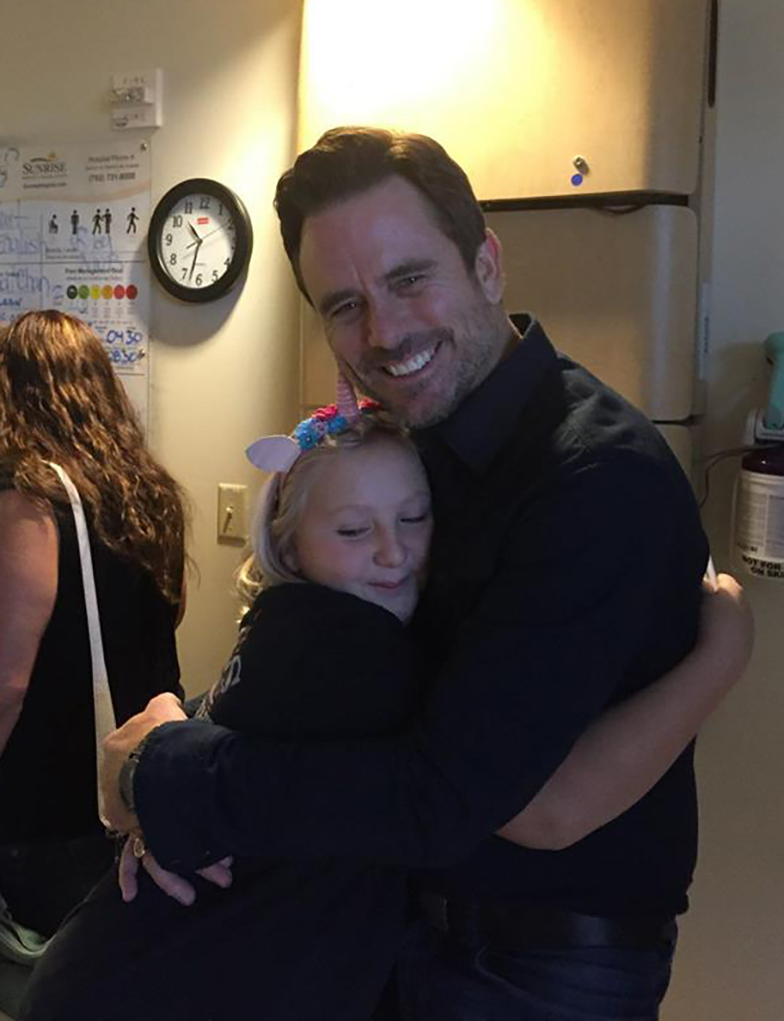 Charles Esten of the tv shows “Jessie” and ‘Nashville” gets a hug from Timori Fowler who knows him from his role on “Jessie.” photo courtesy Trina Folwer 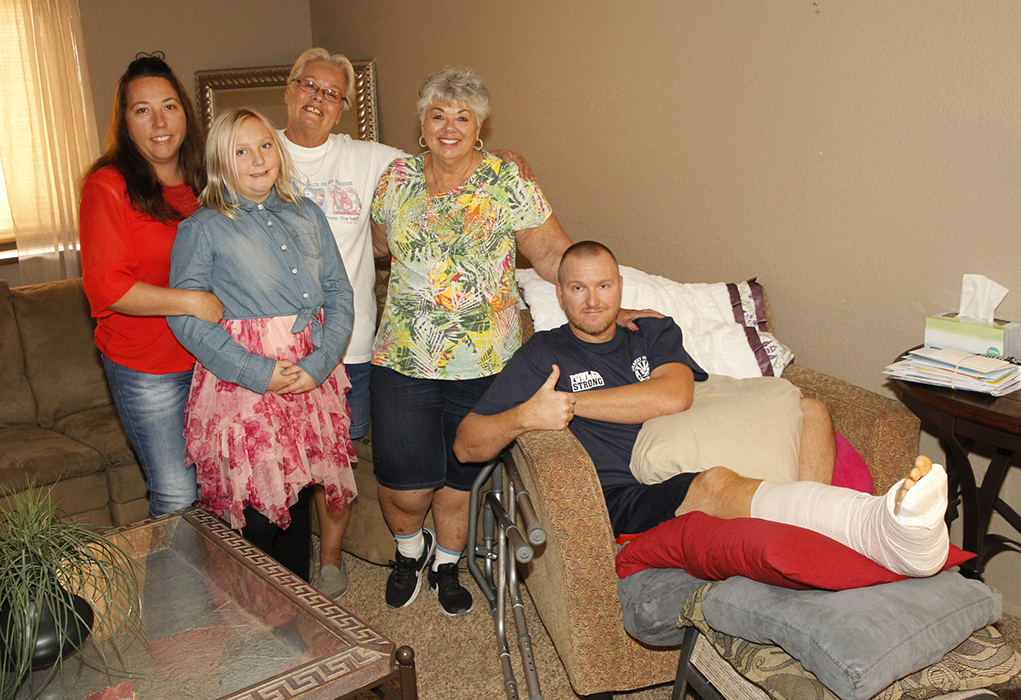 If you would like to donate to their Gofundme page, visit: https://www.gofundme.com/kurt-fowlers-medical-expenses