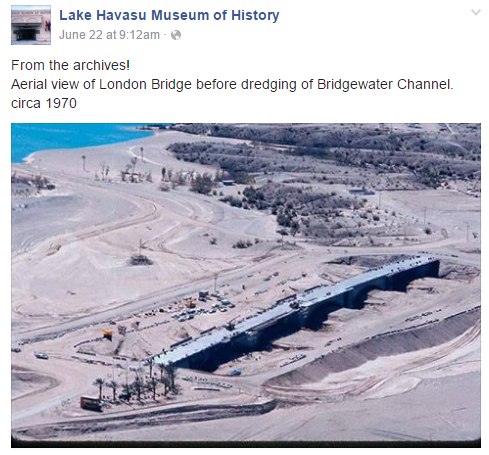 A post on the Lake Havasu Museum of History Facebook page literally took a turn toward viral recently.

Each weekday, a new historical photo is posted on the page. One such photo that was posted June 22 has continued to catch the eye of hundreds of thousands around the world.

The image is an aerial shot of the London Bridge being reconstructed in the desert near Lake Havasu in 1970. The Bridgewater Channel that now flows beneath the bridge was yet to be dredged and there is nothing there but desert sand.

In just under a week, the photo has garnered 137,174 reaches, 1,147 shares and more than 100 comments. The Facebook page itself has gained 522 “Likes” since last Wednesday with more coming on board each day.

Sharing history is the purpose of any museum and this history has reached more than anyone ever imagined.

History is alive and never boring … just check out the museum’s Facebook page and join the fun.