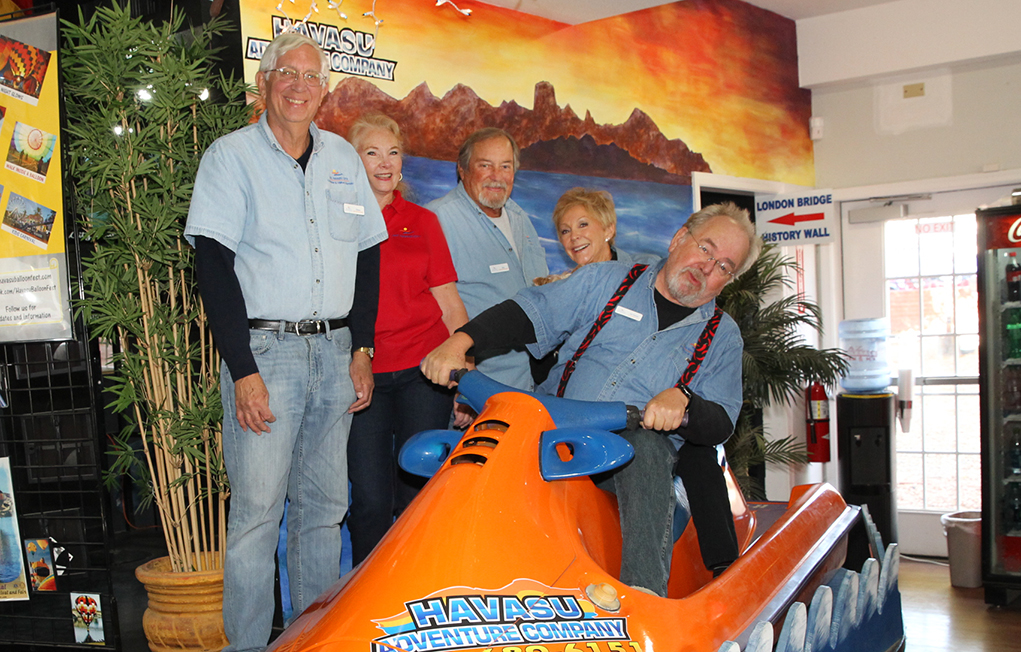 The Lake Havasu City Visitor Center in the English Village welcomes 100,000 tourists each year. That volume currently is in the hands of the center’s Director of Visitor Services, Jan Kassies, and his staff of 28 volunteers. 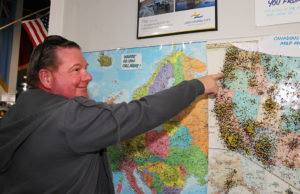 Visitor Larry Chambers points to a pin he just added to a map of his hometown of Eugene, Oregon. Jillian Danielson/RiverScene

“It’s really a lot of fun to work here, you really meet a lot of interesting people,” said Barbie Cross, who has volunteered at the center for five years. “Most of the people who come in, they’re very inquisitive and looking for information on the Bridge. They’re on vacation and usually really happy.” 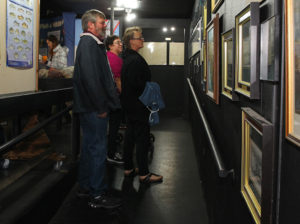 Director Kassies said his most interesting characters include a man who wore wooden shoes and a Scottish kilt, but had lived his whole life in Indonesia. Another individual had been a world traveler for three years by way of couch surfing.

Center volunteer Susan Dull said she has talked to many London-based visitors who’ve walked across the London Bridge years before in England and wanted to walk across it in the U.S., too.

“We’re pretty knowledgeable about the Bridge,” Dull said. “Things like, the lanterns on the Bridge were melted down from the cannons uses in the Battle of Waterloo against Napoleon.” 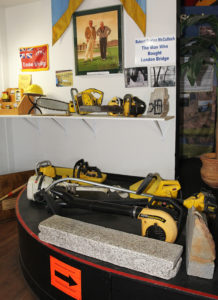 Many other visitors seek information about the city’s founder Robert P. McCulloch and what it was that brought him here. Some want to know the best or nearby restaurants in town and directions on how to get there, or what they can do for fun while they’re in town.

The best part of volunteering at the center for David Olday, center volunteer for six years, is meeting the people from foreign countries.

“There are a lot of fascinating people,” Olday said. “If you have enough time, especially in the summer time, to really be able to interview these people it’s really fun to do it.”

“I can get back to my teaching role again,” Olday said. “It’s fun to talk about the history of Lake Havasu City and how it came into existence.” 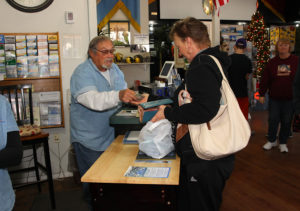 Director Kassies said the necessary traits for center volunteers include the ability to be nice to people and being knowledgeable about the area.

“The most important thing they do is tell the visitor about Lake Havasu,” Kassies said. “Most of the time, my volunteers are the first people they see when they are in town.”

The Visitor Center is open all year, only closing for Thanksgiving Day, Christmas Day, and New Year’s Day. The shifts are 9 a.m. to 1 p.m. and 1-5 p.m. Currently, two volunteers are assigned per shift, but three are needed as the center pushes on into its busiest time of year – January, February, March and April.

The two most asked questions are “‘Where is the bathroom?’ and, ‘where is the Bridge?’,” Kassies said.

Based on a log maintained at the visitor center, the most unusual questions ever asked include:

‘Is this the Grand Canyon?’

‘Where can I get free birth control?’

‘If you don’t do a walking tour, is the Bridge still there?’

‘Where is the Great Wall of China?’

‘Is the Lake open on Thanksgiving?’ 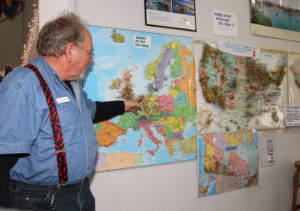 Jan Kassis points to his hometown on the map at the Visitors Center Wednesday. Jillian Danielson/RiverScene

“It should be more than just handing out a brochure,” Kassies said. “The rewarding thing is, you meet a lot of people. Most of the time, they’re in a good mood because they’re on vacation. And, you can tell them something so they can have more fun while they’re here.”

Kassies began as a Visitor Center volunteer and worked in that capacity in Havasu from 2004 to 2007. In 2007, he landed the Director of Visitor Services position. He originally is from the Netherlands and speaks five languages. He recently received nine new pair of suspenders bringing his collection to a grand total of 20 pairs. He wears a different set each day.

Another 10 volunteers currently are sought at the center. For more information, please call Kassies at 928-208-1462.