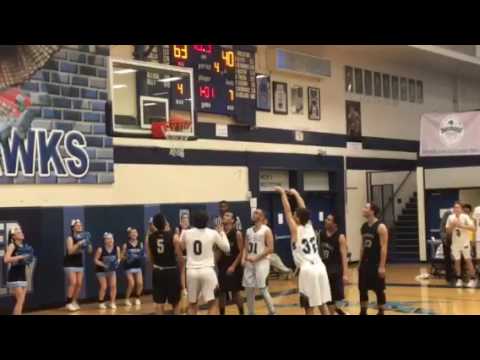 The Lake Havasu High School basketball team played Deer Valley High School Feb. 7, and what happened at the end of both the freshman and varsity games showed sportsmanship and heart.

“Good morning, After seeing the incredible sportsmanship that your Knights revealed at yesterday’s basketball games, I had to write to you and express just how impressive it was to see.

On your Freshman team, despite losing, your players, I think #24, purposely held the ball for five seconds, so DVHS could get the ball.  An incredible gesture because our team manager could suit up and play in the last few minutes and was able to score.  It wasn’t the fact that he shot a three, but the kindness your team showed.  In my humble opinion, the Knights are winners, big time in my book!

Then, in the Varsity game, more incredible acts of kindness occurred in the last minutes of the game. Our coach put in their team manager, a senior, who is also autistic, in the game. Several attempts were made for him to be able to score, including your own Knights passing him the ball. He finally scored and it was an incredible humbling experience to witness.

Thank you to your coaches and players for their integrity, sportsmanship and kindness. Lake Havasu HS should be PROUD.

“Good morning. You might have already heard, but I wanted to personally send an email in honor of your boys basketball coaches and players. The class they displayed last night and even the first time we played you in Havasu was absolutely amazing. Last night we were fortunate enough to play our managers who all have disabilities. Not only did they allow him to shoot multiple times, the last 10-15 seconds on all of his misses, the Havasu players and DV players passed him the ball. He finally hit a shot with about 7 seconds to play and fell to his knees in complete joy. We have video of this if you guys are interested.

We are extremely thankful for the class they displayed without any kind of set up or discussion.

Dunn later told River Scene Magazine that all Deer Valley managers have special needs and have made shots each of the last five years.

Dunn said in an email, “Beginning with Jose Meraz, whose shot made it on ESPN and he got to meet LeBron James at a Sun’s game. Matt Martinez was our last manager that hadn’t made a shot in a varsity game.”

He had been given a chance to get into a game earlier in the year, Dunn said but had missed all his shots.

After the game, Dunn said, Matt said in the locker room, “Coach Dunn, I still believe in God even though I missed all of my shots.”

Dunn said, “The players from LHHS were amazing, as well all of our players and fans at Deer Valley. Our basketball program really tries to make everything about others. We really emphasize being servants and thinking of others before ourselves. Moments like these are what all of my players will remember not what they accomplished, but rather how our culture at Deer Valley got to see kids, who typically don’t get a chance to shine, were the center of amazing moments.”