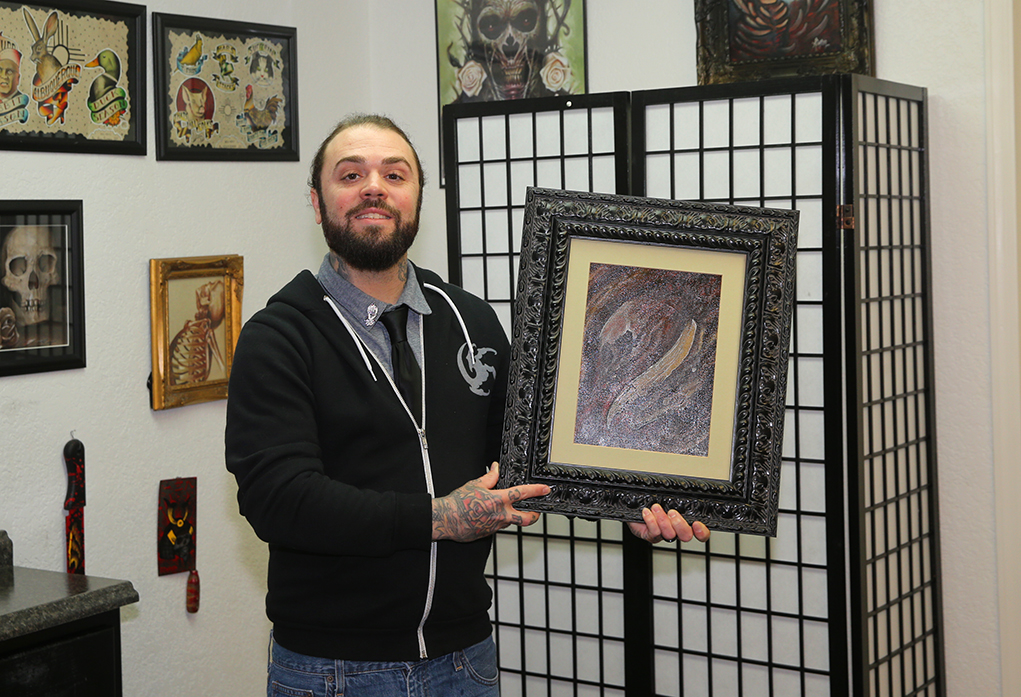 Local artist and community organizer Adam Romano is paying homage to generations of artists as he presents the Past/Present/Future Art Show Saturday, at the Lake Havasu City Aquatic Center. The event will feature art from three generations of local artists on display and for sale.

This artist would prefer to have the spotlight focused on the event he organized, but he should take a lot of credit for the show. Romano, a member of the Havasu Art Guild, is an accomplished, award-winning artist and tattoo artist in Lake Havasu City. He is also an executive member of the Allied Arts Council of Lake Havasu City.

Romano has a passion for the community and the arts and organizing events is nothing new for him. “I’ve got roots in Havasu for 20 years.” Giving back and bringing art to the community has been an ongoing journey for Romano. 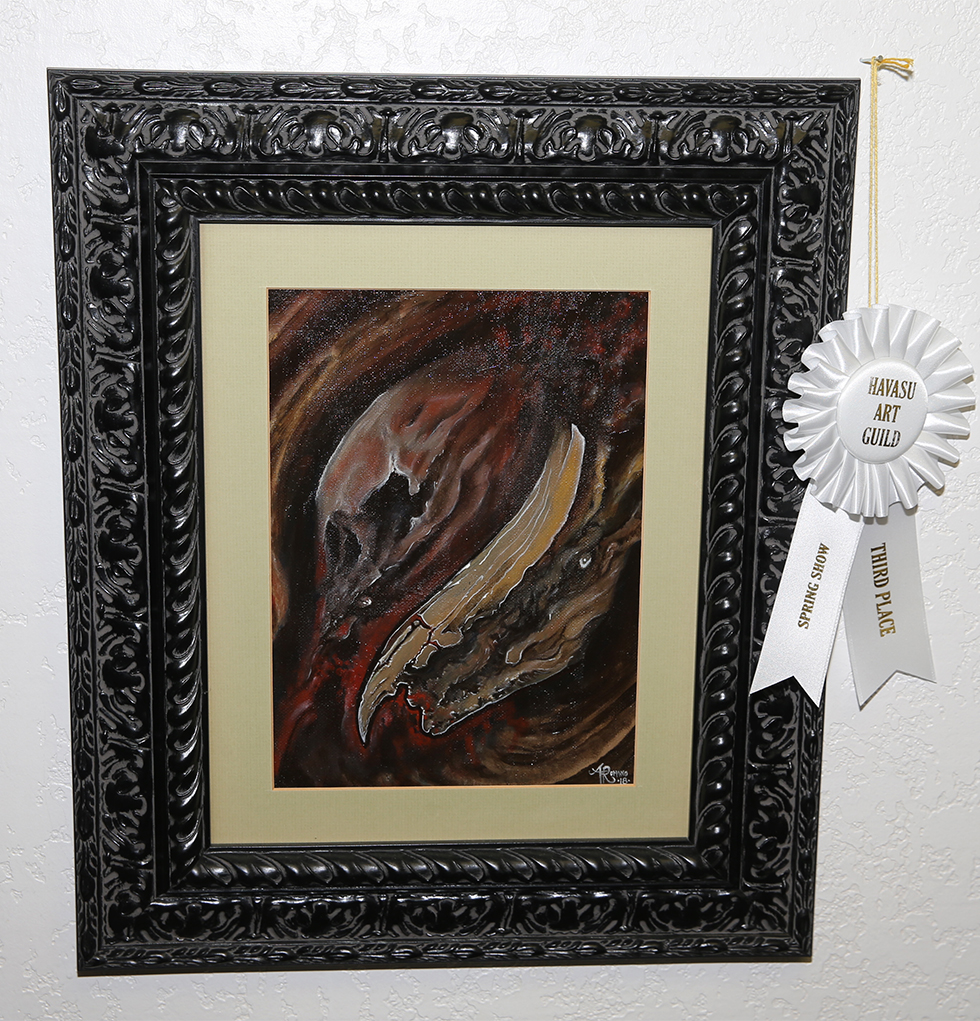 A painting done by Romano is displayed on his wall. Jillian Danielson/RiverScene

In 2013, he curated a carnival and sideshow themed event called “The Show Must Go On” featuring works from over 45 national and international tattoo artists. The same year Romano published “Wanderlust,” an art book that has since been published through Kingpin Tattoo Supply. This year, his painting “Bridge Between Two Cultures” is on display at the Lake Havasu Museum of History.

In 2017, Romano organized the Fall Artistry Workshop which provided education in art to young students for free. Local volunteers comprised of artists, teachers and organizations lent their effort and support in educating 75 elementary  students.

Romano has also picked up several awards for his art and tattooing. 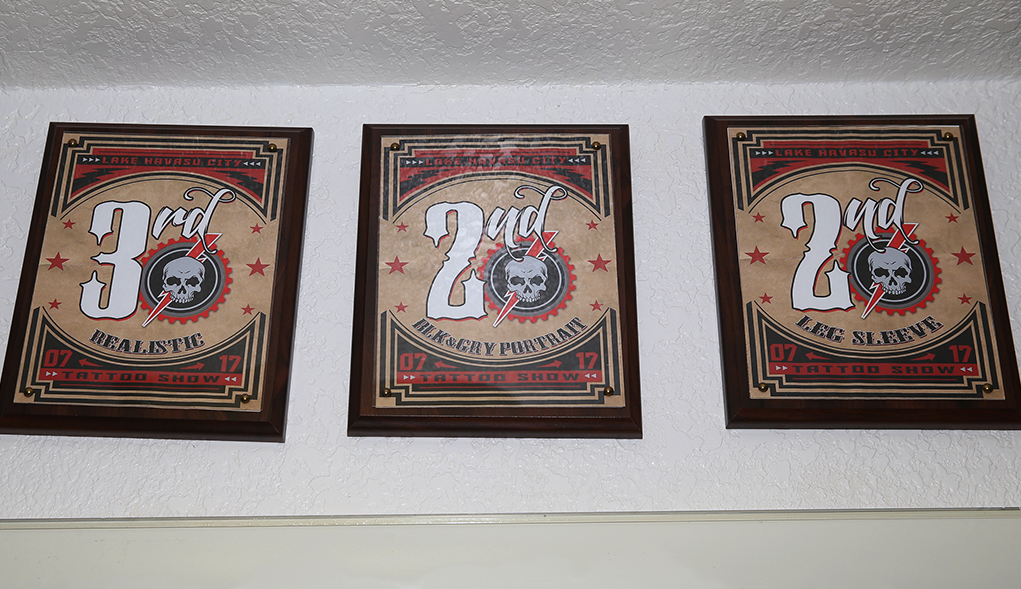 Romano’s grandmother was an inspiration and a big reason why he gravitated to art. “When I was a kid growing up, she was a giant inspiration and would always help with art supplies and all kinds of stuff.”

Romano returned to Havasu upon her death and set up residence again.

Romano has traveled extensively throughout the United States and has lived in San Diego, Florida, and Tennessee to name just a few locations. “I’ve got real world experience in almost every major city in the United States.”

All of that experience has made Romano a rigid student of various mediums, such as watercolor and oils. “Most art is going to interest me. The other main focus that I’m working on right now is murals. Large scale, community involvement projects as a way to bring art to the town, to our community so that … you can see something beautiful.”

Romano said, “I get a great deal of joy out of my work but the real accomplishment is what I am doing now, and what I have done in the past few years in regards to community organization and involvement.” 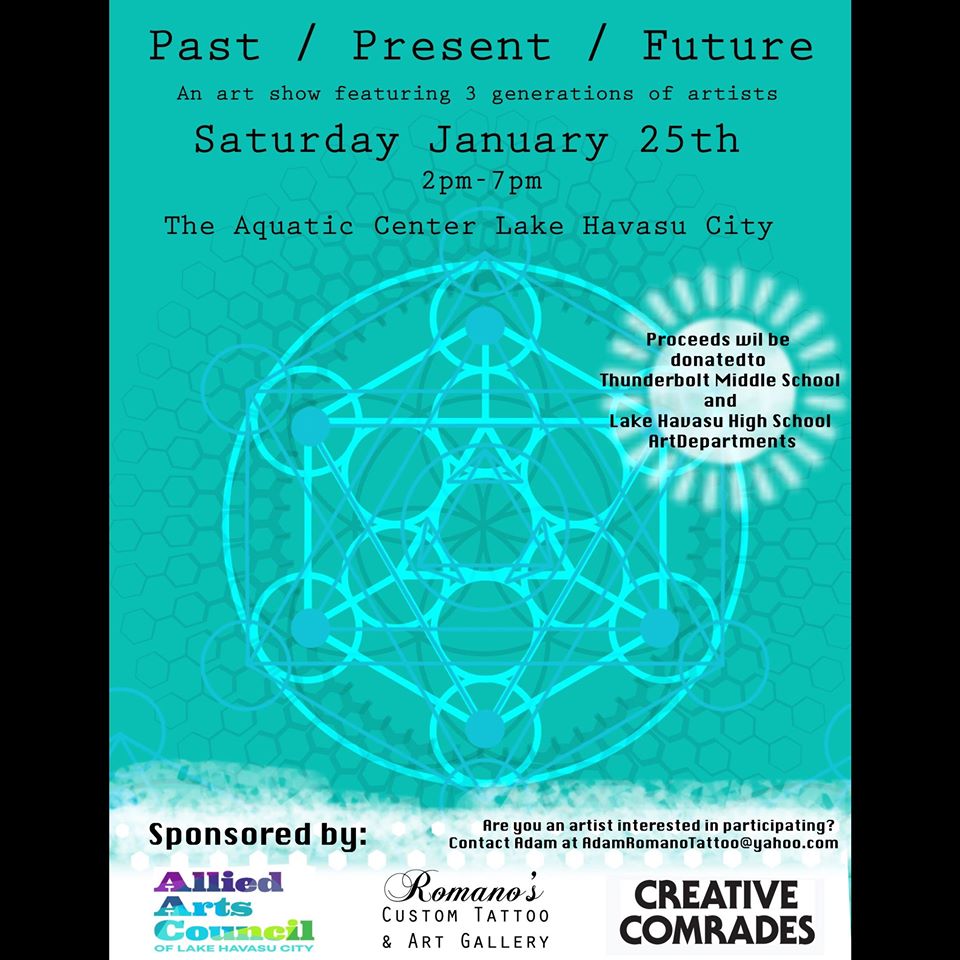 Romano’s next project is Past/Present/Future which opens Saturday at the Aquatic Center. All proceeds will be donated to the Lake Havasu High School and Thunderbolt Middle School art departments. More than 65 students have contributed to the art show and those students will get to see their art displayed with other working artists.

As for his proudest accomplishments, Romano is resolute in saying that they’ve yet to come. “I’ve achieved things I didn’t think I could five, 10 years ago.” He said he is confident that the future looks bright for his endeavors, both personal and community oriented. “I always look at what’s going to be coming next.”

Adam Romano’s tattoo shop and art gallery is located at 2169 Swanson Ave. #6. He is also on Facebook and Instagram.