Local Resident Goes Back In Time 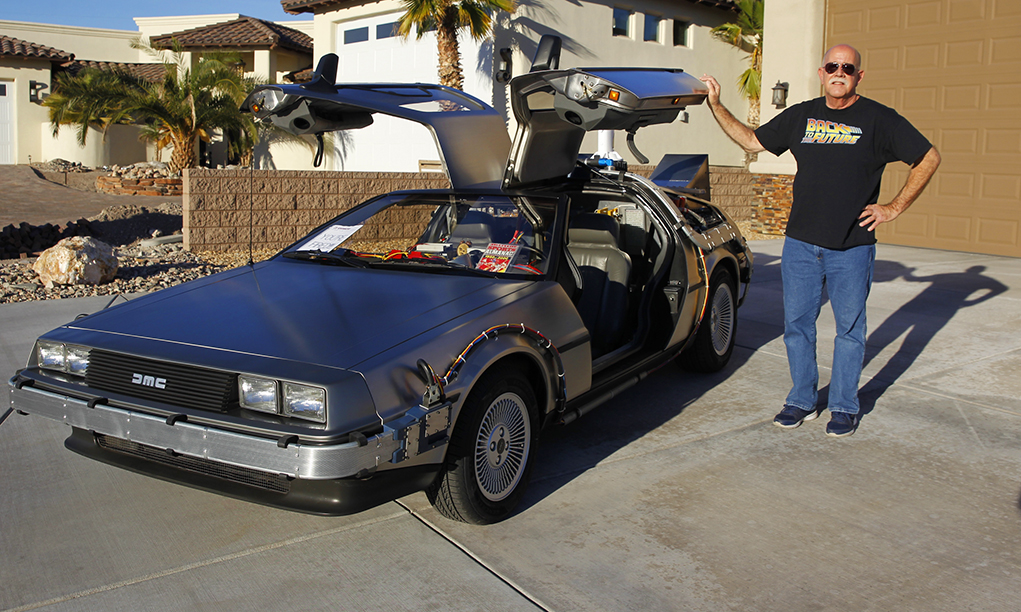 Residents driving around Lake Havasu City for the last year and a half may have occasionally noticed a familiar vehicle on the road – a blast from the past. Or future.

The genuine DeLorean DMC-12 doesn’t just stand out because it’s a rare 1981 vehicle; it has been modified to become an exact replica of the time machine as seen in the “Back to the Future” movie franchise. 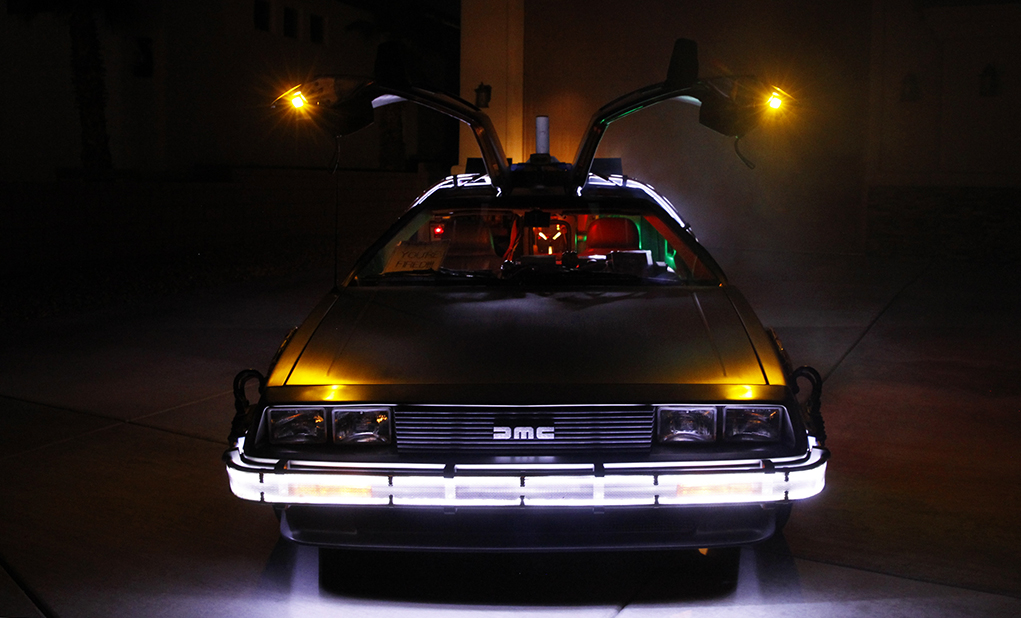 The replica car of the “Back to the Future” DeLorean is lit up at night. Jillian Danielson/RiverScene

Owner Steve C.* laughed as he described the car as his “mid-life crisis.”

Steve said the idea to create a replica came in 2015 after watching a special about the movies. He said that on a whim, he got online and started looking at what was available. He found a few different companies that offered something close to what he was looking for, but a Texas-based company that did some of the work on the original on-screen vehicle ultimately got the job.

“I wanted something as close to screen-accurate as possible,” he said.

About eight months after placing the order, that’s what he got. The DeLorean is all stock parts, except for the time machine additions. And the additions are authentic – many replicated by the same companies that manufactured the movie props. 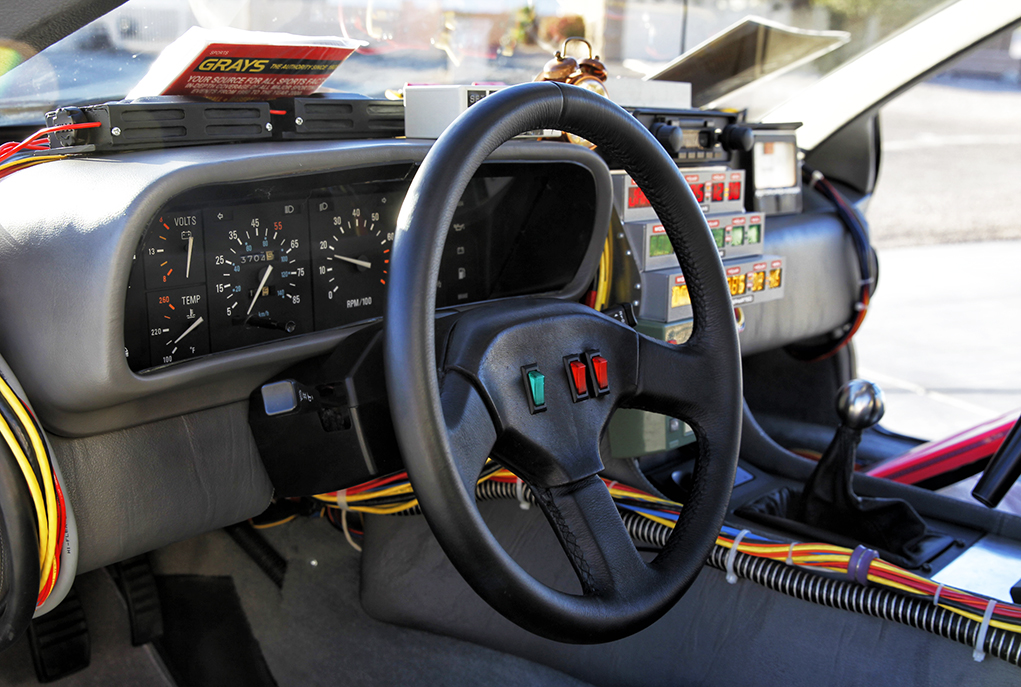 He said when it was finally delivered, his first reaction was “holy blankety blank blank!”

Steve’s time machine features nearly everything fans can see in the movies, including smoke machines for the dramatic exhaust, Mr. Fusion (interchangeable with a plutonium chamber), time circuits, which are programable, a speedometer and alarm clock on the dash, and of course the key to time travel, the flux capacitor. And on top of the driver’s sun shade: actor Christopher Lloyd’s autograph.

Steve said the autograph was an extra feature offered by the builder, a friend of Lloyd.

“I thought it was a great idea,” Steve said. “I liked Doc Brown in the movies and it was a nice extra detail, extra touch.” 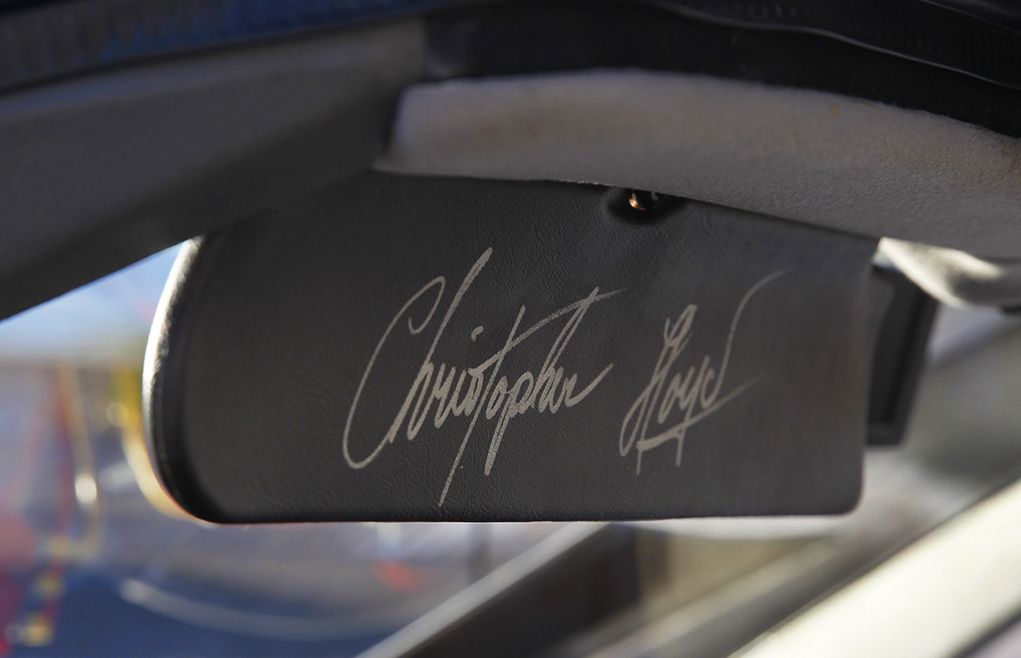 Steve also carries props in the car that are replicas of the ones used on screen. He has a sports almanac, a hoverboard and even a fax that says, “you’re fired.”

“This car is a lot of fun to drive around and gets a lot of attention,” Steve said. “It really brings a smile to everyone’s faces, because maybe it reminds them of their youth or they’re really big fans of the movies.”

Steve said he is now retired from the auto parts industry, and so enjoys keeping the car itself in shape too. He said he is careful not to take it out too much in the heat of the Arizona summer, because some of the props are plastic and could melt. He said he also puts extra air in the tires to account for the weight of the time machine parts.

“It’s a never-ending project,” Steve said. “I’m constantly tinkering because I want it to be as perfect as a 37-year-old car could be.” 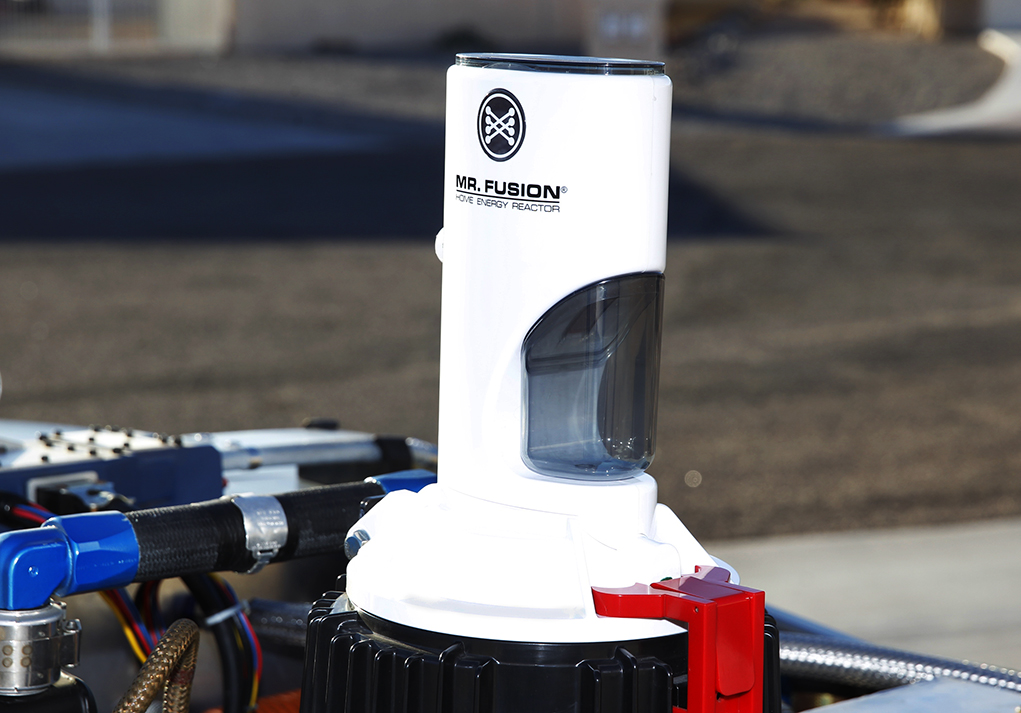 “Mr. Fusion” is attached to the “Back to the Future” replica car. Jillian Danielson/RiverScene

He added that all the time, money and energy spent on the vehicle has been more than worth it.

“The car is a blast, and the attention it does get is all so positive,” Steve said. “It brings so many smiles, from 11-year-olds to 70-year-olds, and it makes it totally worth it.

“I was really fortunate to be able to get it built, and I love that everyone else can experience it vicariously through me too.”

*At the request of the car owner, his last name has been omitted throughout the story to protect his identity. 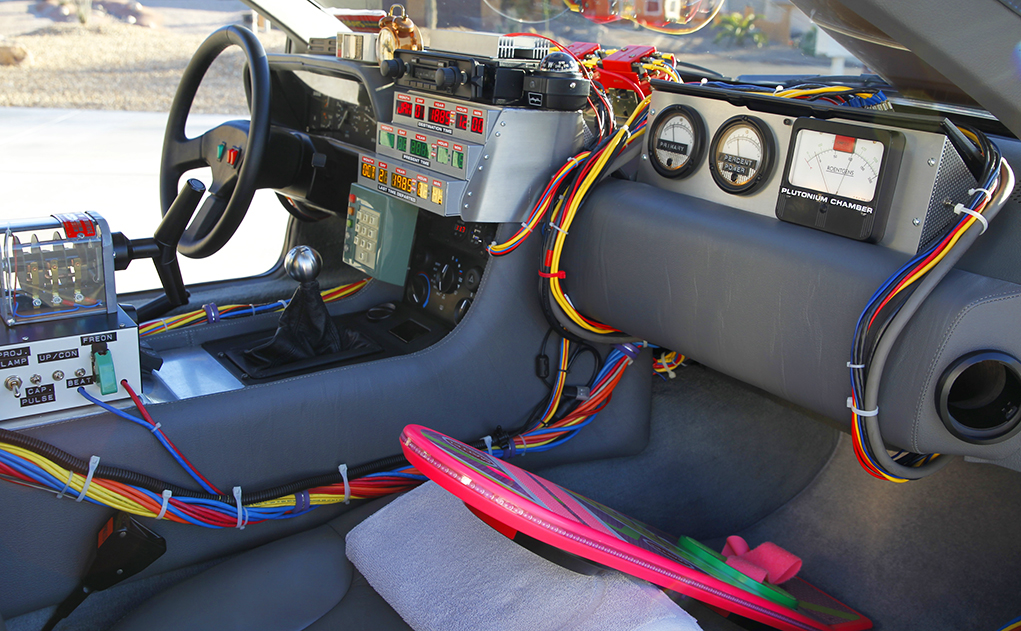 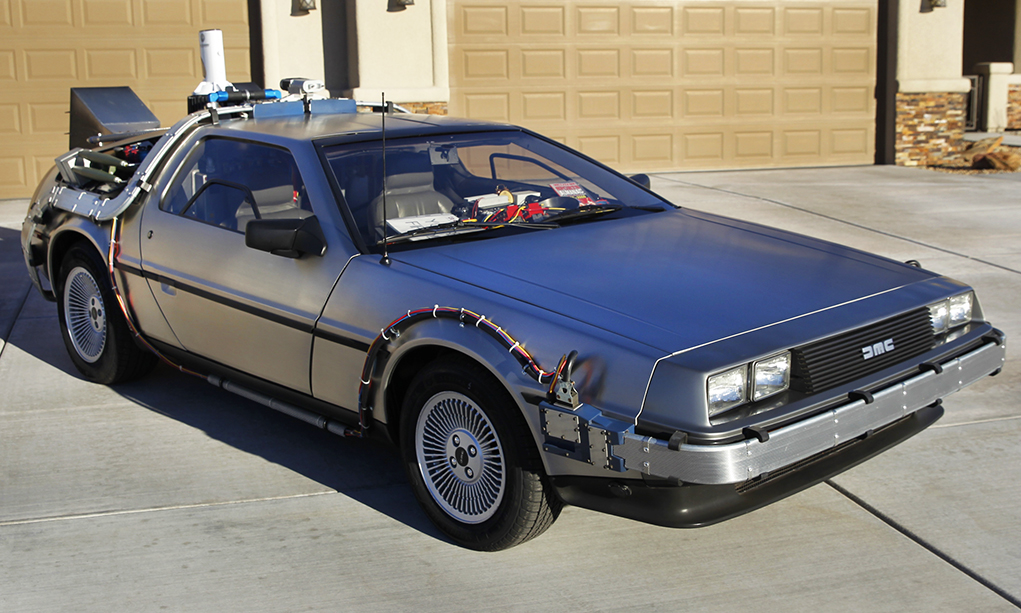 A replica of the car as seen in “Back to the Future.” Jillian Danielson/RiverScene 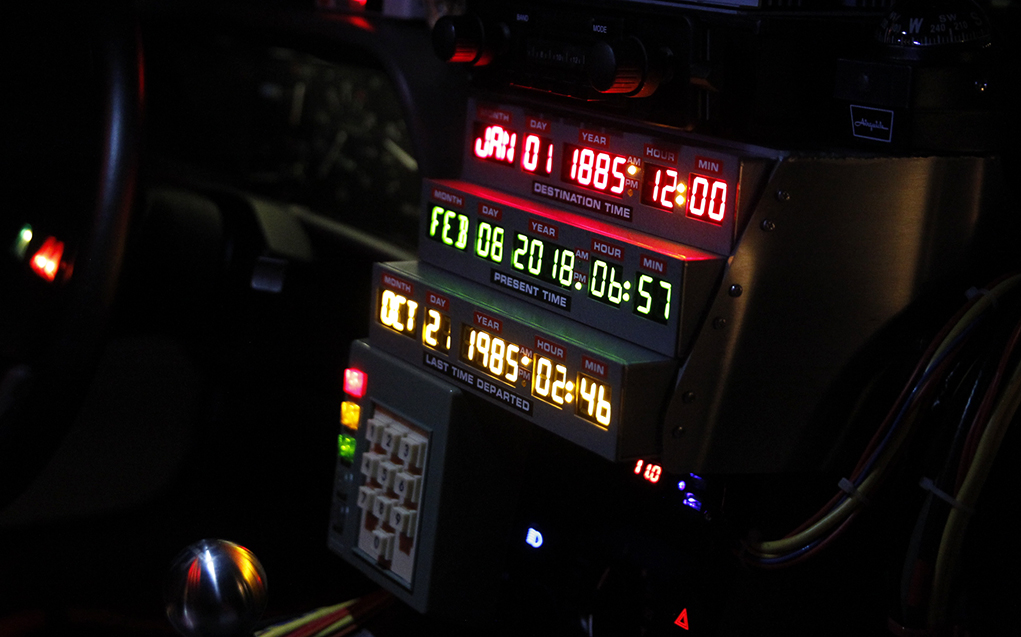 The dashboard of the “Back to The Future” DeLorean replica matches the original. Jillian Danielson/RiverScene 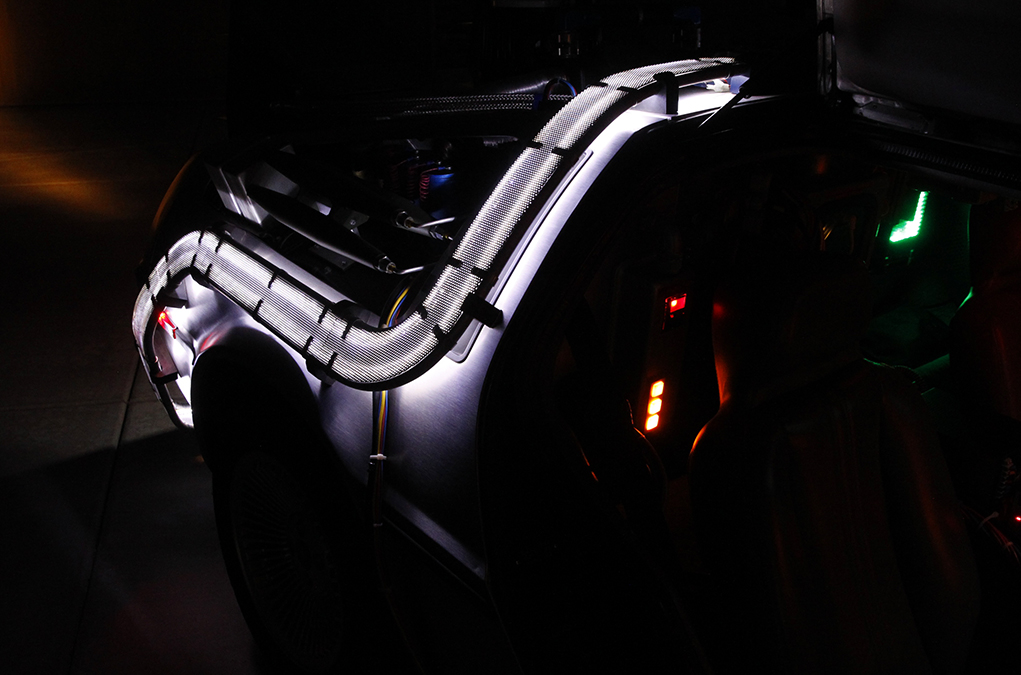 The “Back to the Future” replica car lights up as seen in the movie. Jillian Danielson/RiverScene 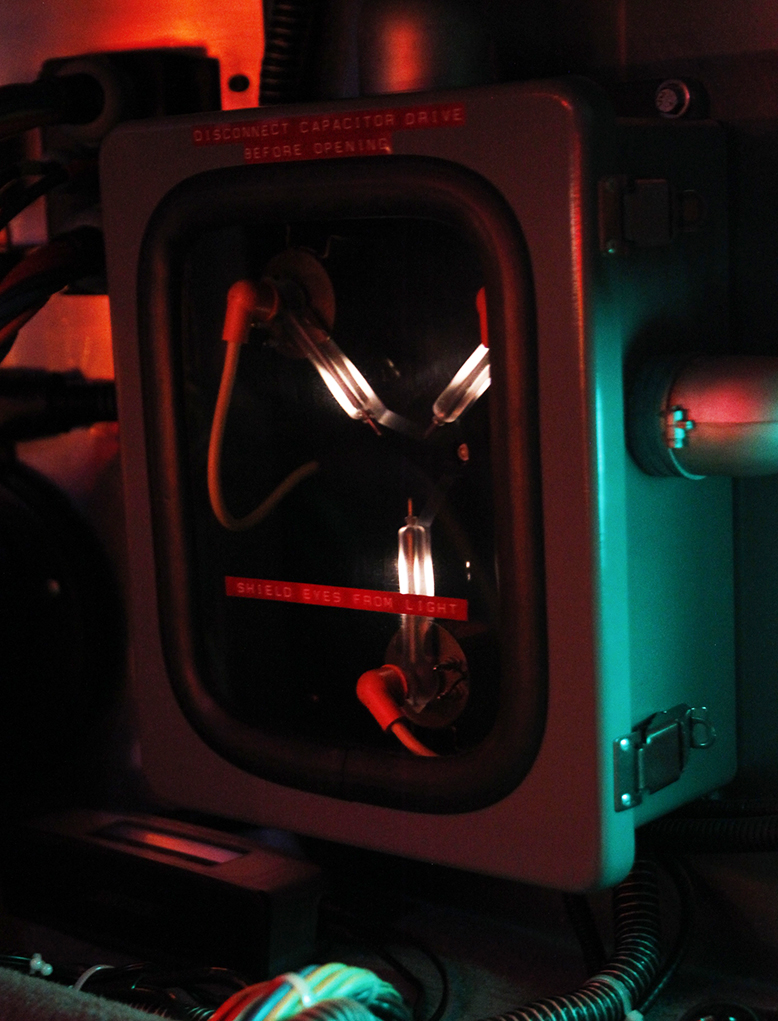 The “Flux Capacitor” is on display in the “Back to the Future” DeLorean replica. Jillian Danielson/RiverScene