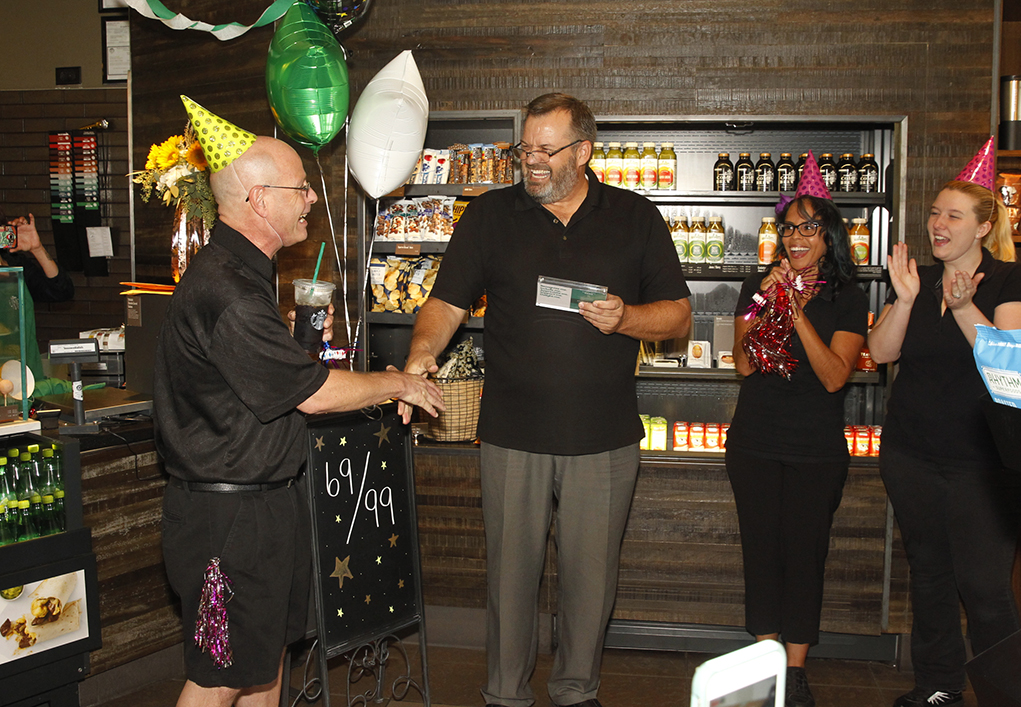 Starbucks corporate officials visited the local store at the corner of Lake Havasu Avenue and Swanson Boulevard. They were there to present one of the supervisors at that location with the company’s North Star award.

Fellow supervisor Maria Guillemard said, “We are here to celebrate our North Star Customer Service award and our Outstanding Cleanliness Store by corporate and our big celebration is to celebrate our fabulous partner George Schooley.” 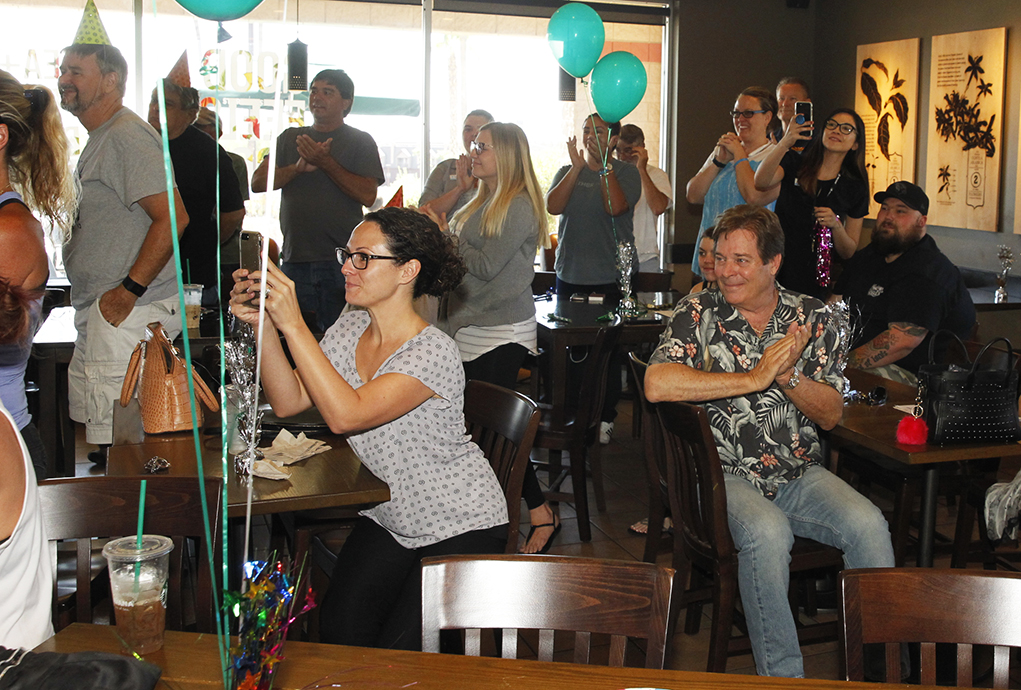 She said Schooley was one of her favorite supervisors and an inspiration. “He makes our day so much better because that’s the difference,” she said.

“That’s The Difference” is the quote Starbucks employees started. “We use it when we have a bad day and we just need some positive reinforcement and it gets us going when it gets crazy and chaotic in here,” she said.

Schooley said he was honored to receive the award. 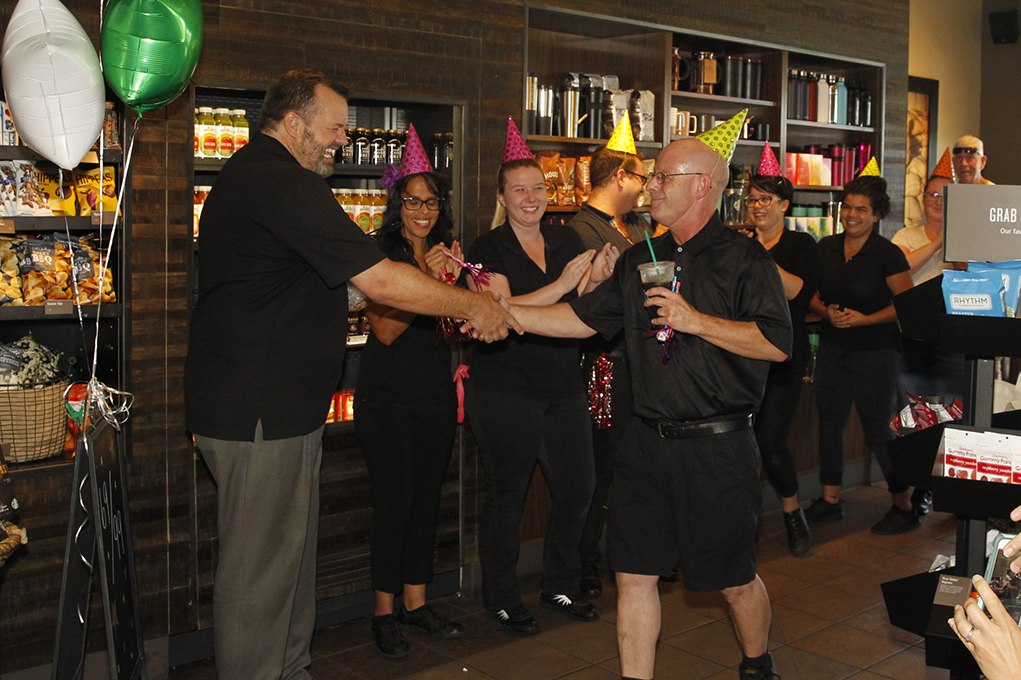 “I’m really honored to receive this but I receive it on behalf of the entire team because the only way one person can succeed is when you’re part of a team that works as hard as these people do. We’re like a family. We pick each other up and I’m proud to say I’ve picked them up and they’ve picked me up,” he said.

Jenny Lilla, also of Starbucks, said the North Star Hero award honors the impact Schooley has made on our customers and community. 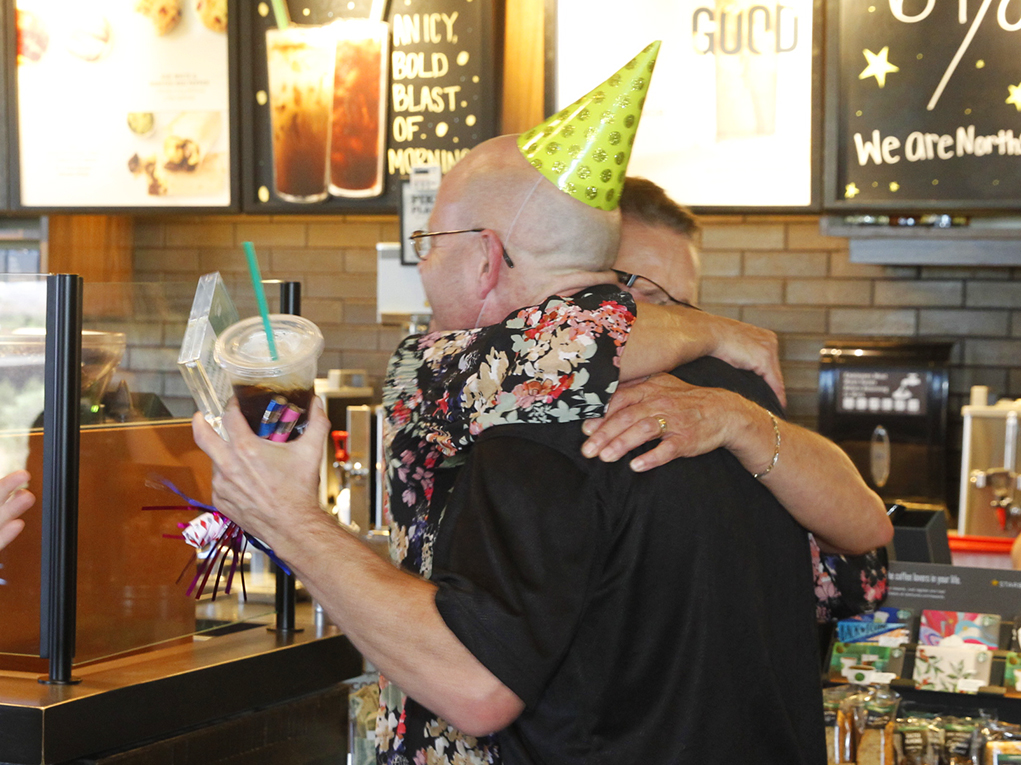 “I think George is one of Havasu’s greatest heroes. He represents the best of our community as travelers from all over the world visit us. They meet George and leave feeling a sense of what our small town is all about. He makes our store the small-town coffee shop. Our locals are treated like family with him and they always leave with a smile. He finds his inspiration from the belief that he can make a difference one cup at a time,” Lilla said. 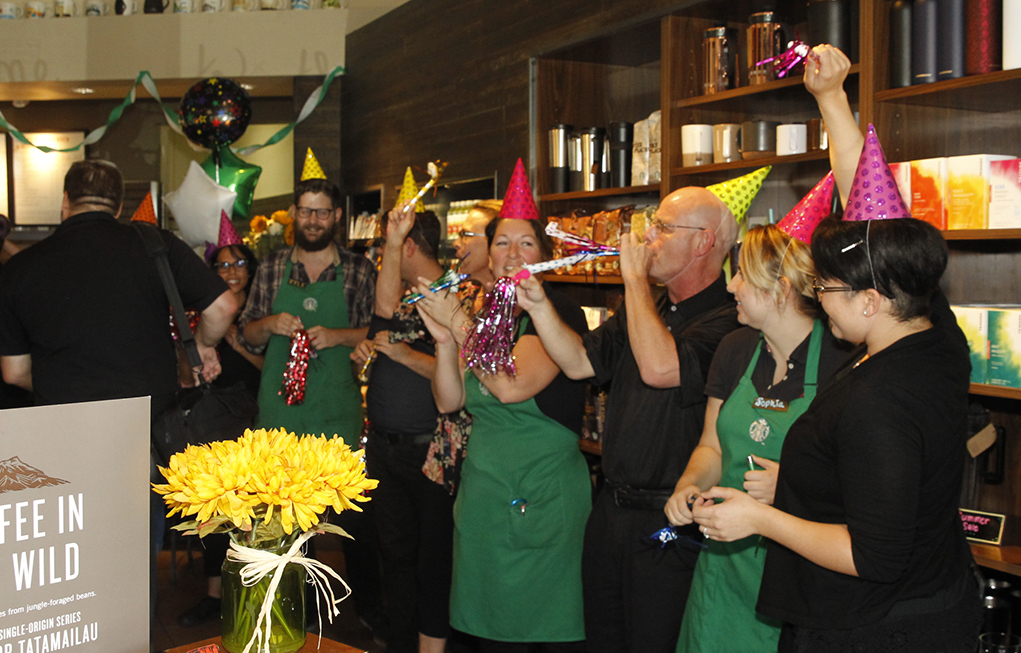 Starbucks employees greet customers as they walk in the door Thursday before suprising George Schooley with an award. Jillian Danielson/RiverScene 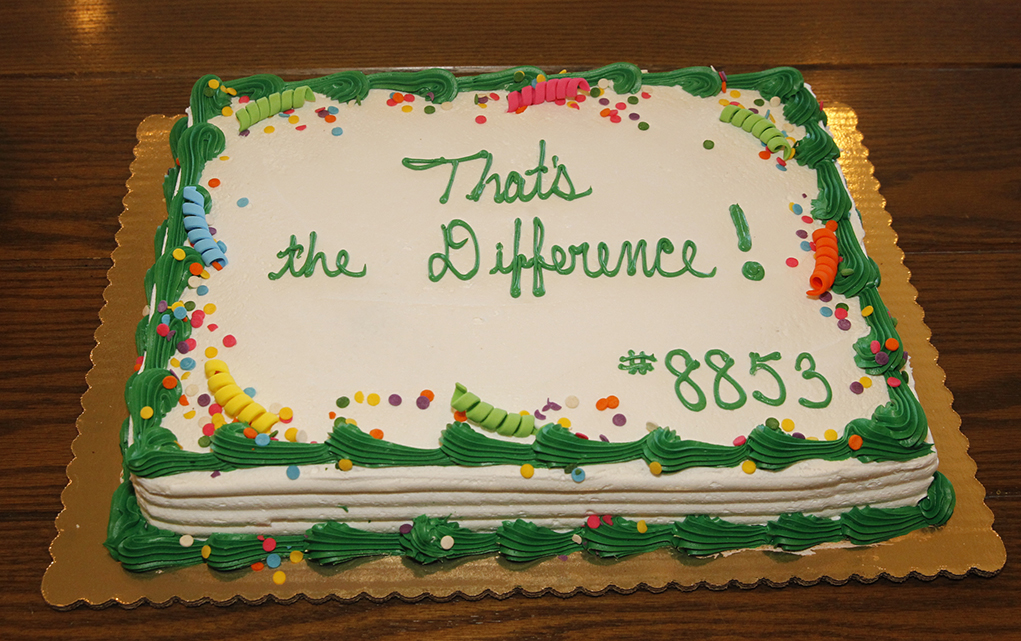 A cake with the quote “That’s the Difference” is on display on a table at Starbucks Thursday afternoon to as part of the celebration for George Schooley. Jillian Danielson/RiverScene 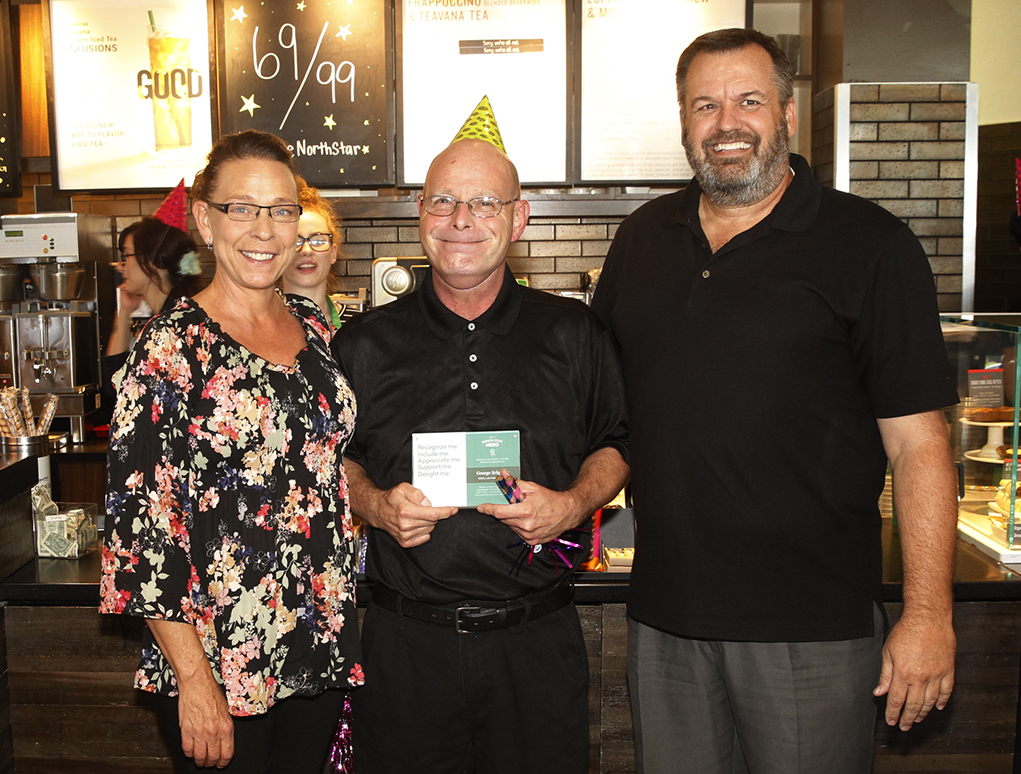 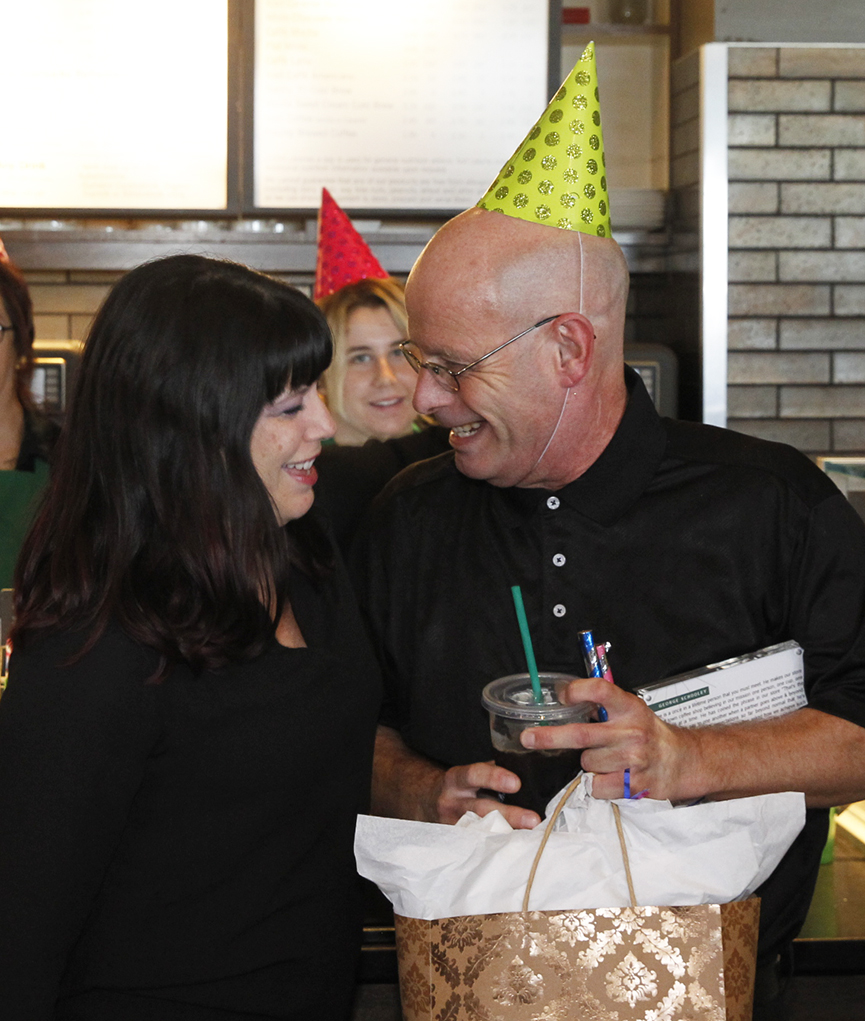