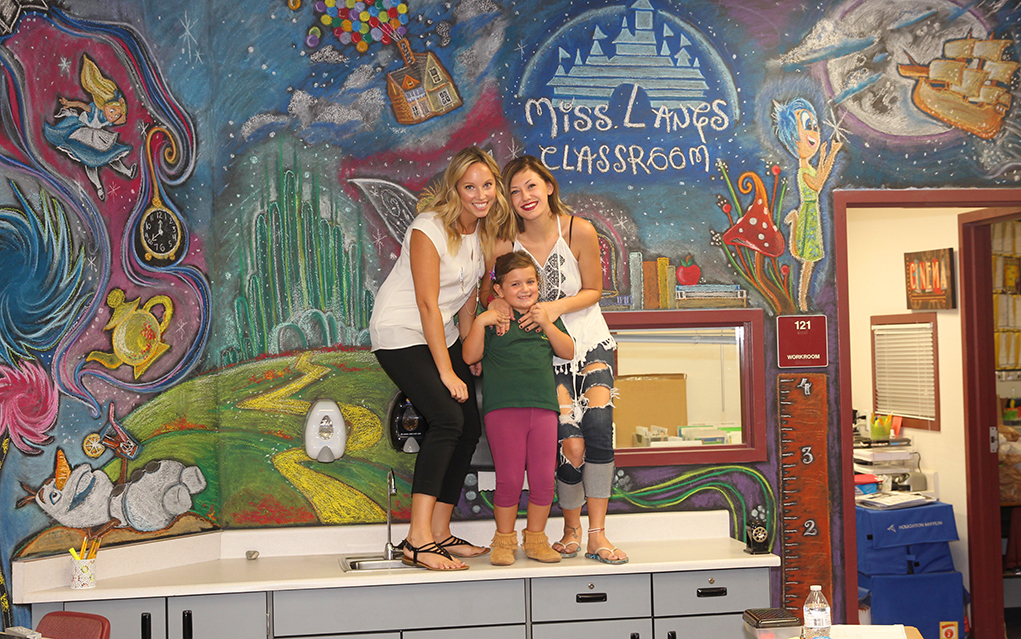 The Disney-inspired mural in Miss Emily Lang’s second-grade class at Jamaica Elementary in Lake Havasu City has proven itself to be an intuitive and innovative move when it comes to truly brightening the school experience for one autistic student.

“I really like your chalk wall,” said 7-year-old Amelia Smith to Miss Lang on Friday after school. 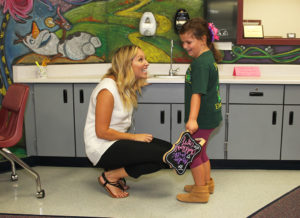 Emily Lang talks with Amelia Smith about her favorite character on the mural. Jillian Danielson/RiverScene

First-year teacher Lang said there’s a strict code that must be followed when it comes to decorating the classroom, with only a certain percentage left for unleashed imagination. She chose to paint – with chalk board paint. That way, she could bring in a local artist to do a large mural.

“I wanted color, and I wanted happy,” Miss Lang said. “I really wanted something Disney, and fairy-tale themed.”

“It really just flowed out of me, I’ve never been so engulfed in something,” Bracamonte said. “I knew it would be good for the kids but after seeing the reaction, I’m a true believer in art therapy.”

When it comes to student Amelia Smith’s autism, the first day of school and starting a new schedule was quite daunting. 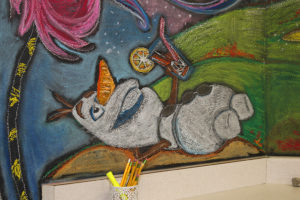 “Olaf” from the movie “Frozen” is one of the characters painted on the mural. Jillian Danielson/RiverScene

“When I first walked in, I thought it really was amazing,” Amelia said. “My favorite part about it is when you spread the magic to calm down … we use our chalk board when we need to calm down and when we are getting ready for tests.”

The mural depicts all different types of Disney-inspired characters from Disney films spanning the classics to present day. Amelia’s favorite is the character Joy, of Disney Pixar’s “Inside Out.”

“I like Joy because she’s happy all the time,” Amelia said. “She’s really excited and really happy every day. She’s not sad or angry or grossed out. She is colorful and happy. I just look at Joy and she makes me smile.”

Lang said the mural will be up all year long. 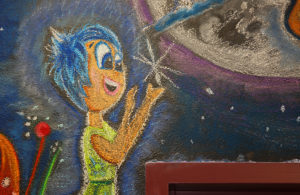 “Joy” from the movie “Inside Out” is Amelia’s favorite character on the mural. Jillian Danielson/RiverScene

“It’s an automatic brain break, a time out you can get lost in a little bit,” Lang said. “With Amelia, that comfort level was there. Here, we share good things, and she kept sharing Joy … over time, we’ve grown as a team a little and they’ve become very protective of it. This is our chalk wall.”

Amelia agrees and told of the consequences.

“You can’t touch it or the magic goes away, it goes to Neverland,” she said.

Amelia’s grandmother Kimberly Stevens said Disney always has been Amelia’s thing and stories of the chalk mural often times make it home with her after school.

“She comes home and she talks about this, especially Joy,” Stevens said.

Last year, Amelia was Joy for Halloween. This year, she hasn’t yet decided just what her costume will be.

“I don’t know yet,” Amelia said. “But whatever it is, it’s going to be amazing.” 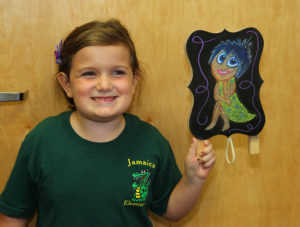 Amelia holds a mini chalkboard drawing of “Joy” that Rosalyn drew for her to keep at home. Jillian Danielson/RiverScene 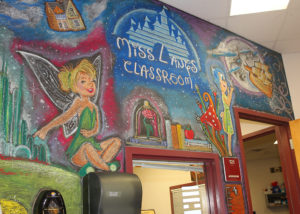 Tinkerbell is one of the characters on the mural painted by Rosalyn Bracamonte. Jillian Danielson/RiverScene